Timberline Trail in a Day! 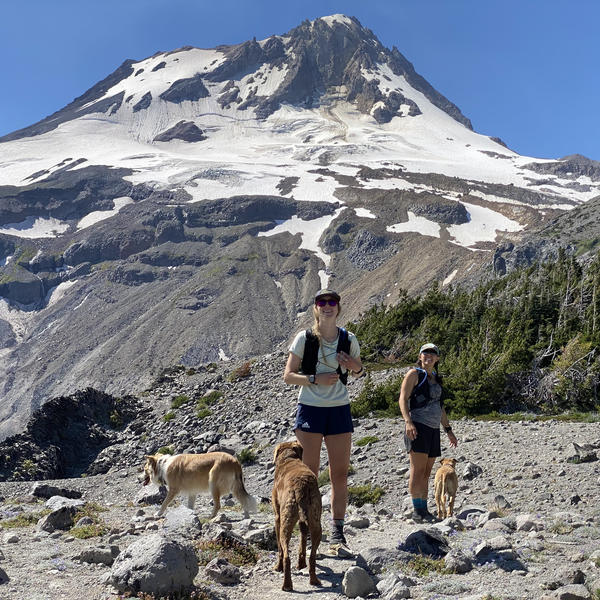 Timberline Trail in a Day!
By: Jan Zarella


Recently during a candid in passing basement discussion (as basement discussions go!) Liz said, "Hey, wanna run the Timberline Trail?" and I said, "Sure, why not?!" We had recently learned that a few Ladies posted an FKT for the Timberline Loop Trail and we had hoped to run fast enough to beat that time. Then another Lady realized she had beat that time by 3 hours, then Brooke Salisbury beat that time by an hour, which rendered our FKT goal a lofty one.  So....we decided we would just do it anyway, have fun, and take the dogs because now we would only run for the goal of finishing in one day!

We arrived at the Top Spur Trailhead on Monday night, slept in our respective vehicles and hit the trail at 4:55 A.M. on Tuesday morning.  All 3 ladies, and 3 dogs were energetic and excited to spend the day running some dirt!  We made our way slowly through the dark, rocky, rooty Top Spur/McNeil Point trail to the Timberline Trail, where we began our approximately 43 mile Counter-Clockwise journey.  We had chosen this location and direction because it gets a lot of the uphill and potentially hot sandy areas over with earlier in the day!  We had our furry friends and their paws to consider and took all precautions we could to ensure their safety on the trail and through all of the water crossings! 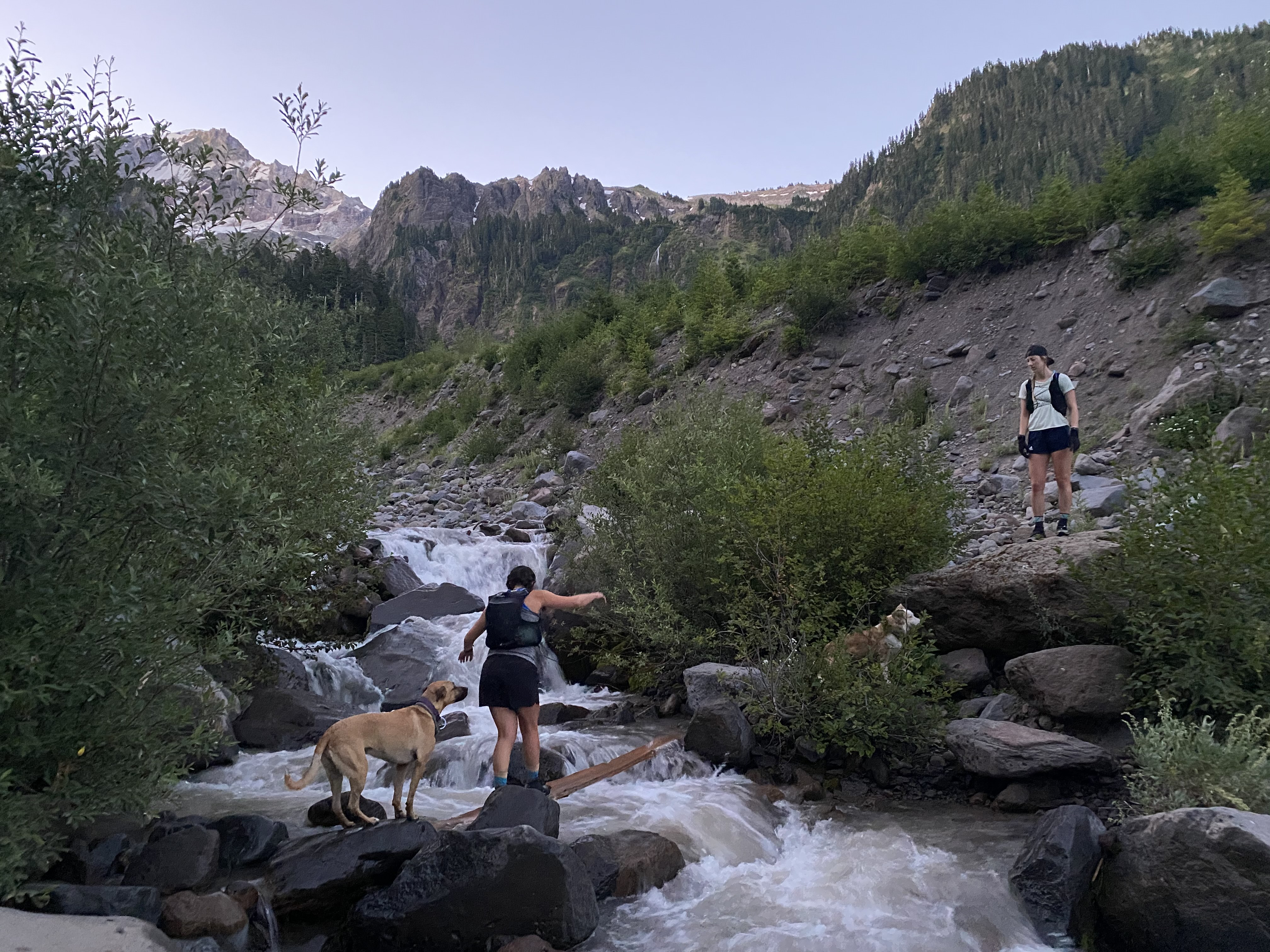 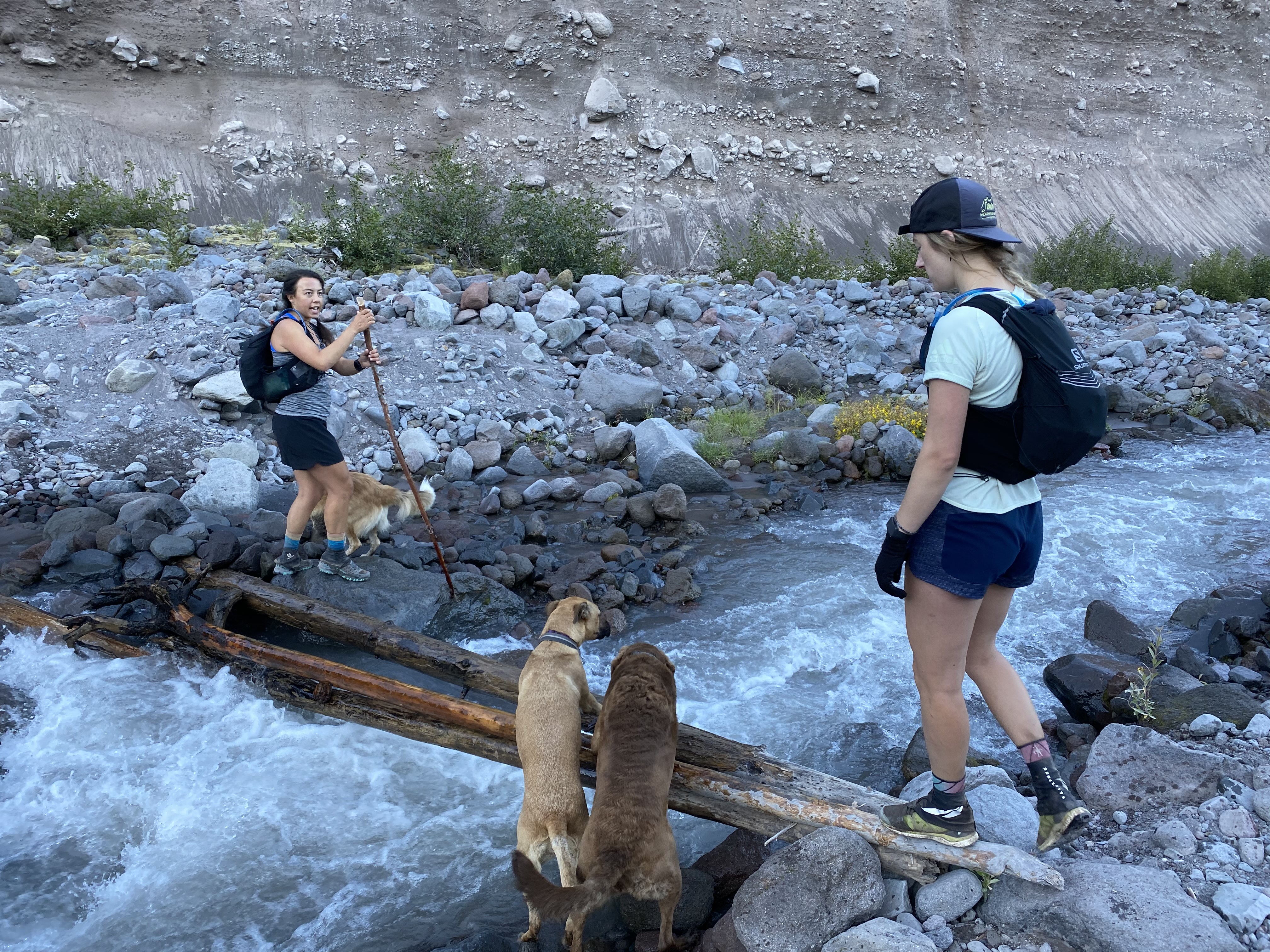 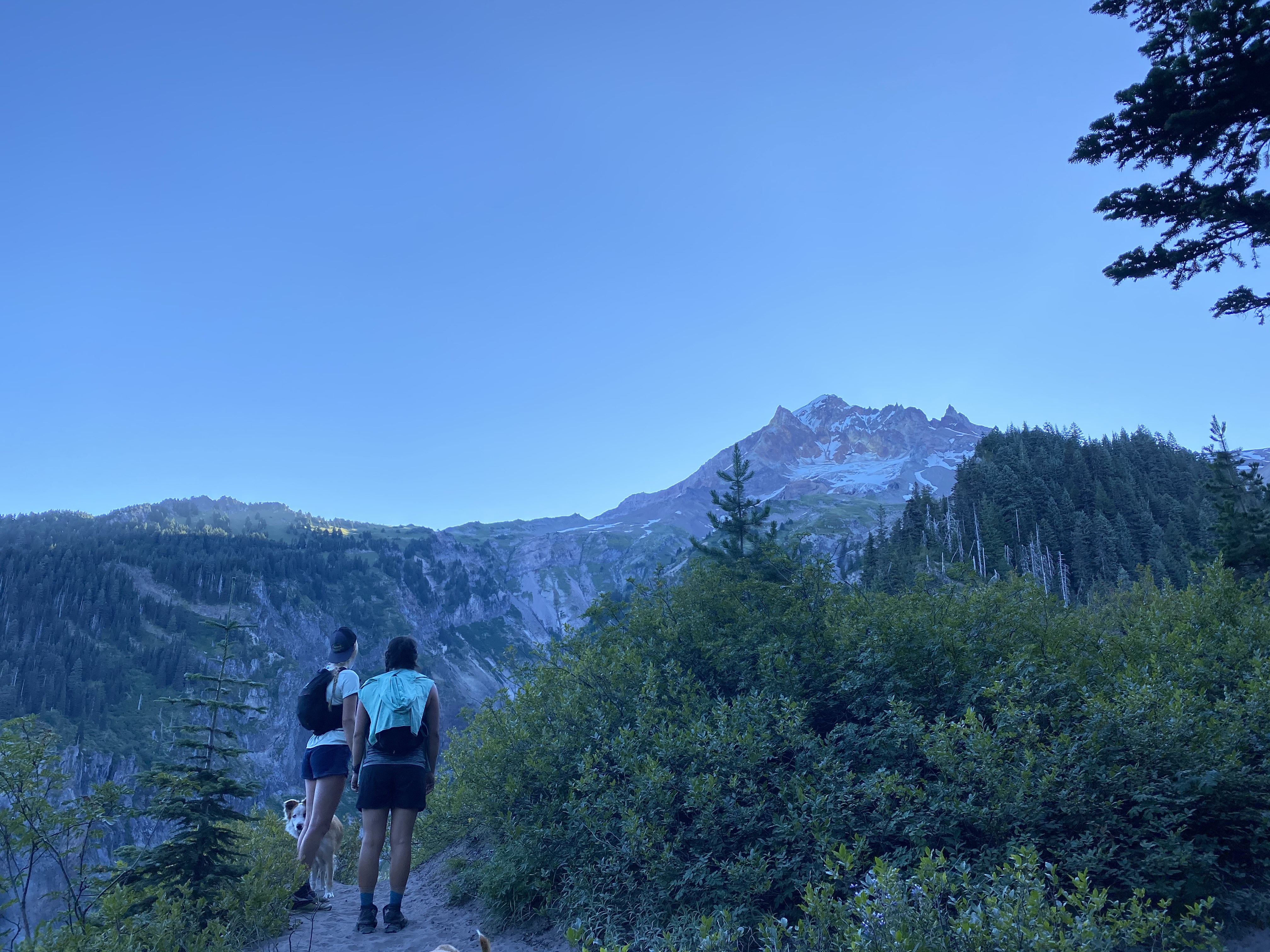 Taking in the light

The miles went by quickly and we had passed the Muddy Fork, Yocum Ridge, and were at Ramona Falls before we knew it! We made our way across the Sandy River, past the Paradise Park loop trail, out of Zig Zag Canyon and eventually met up with the PCT which guided our way toward Timberline Lodge. 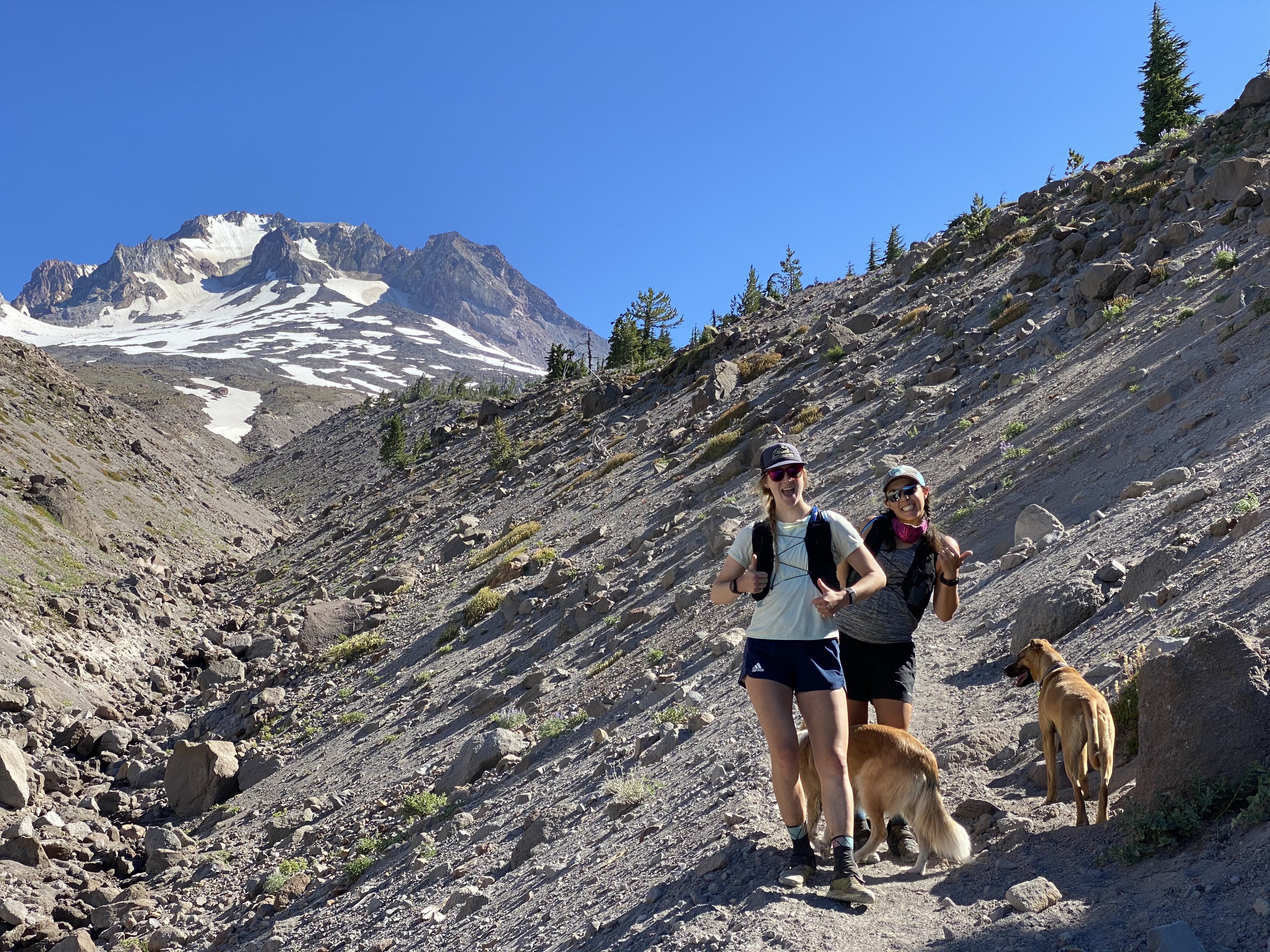 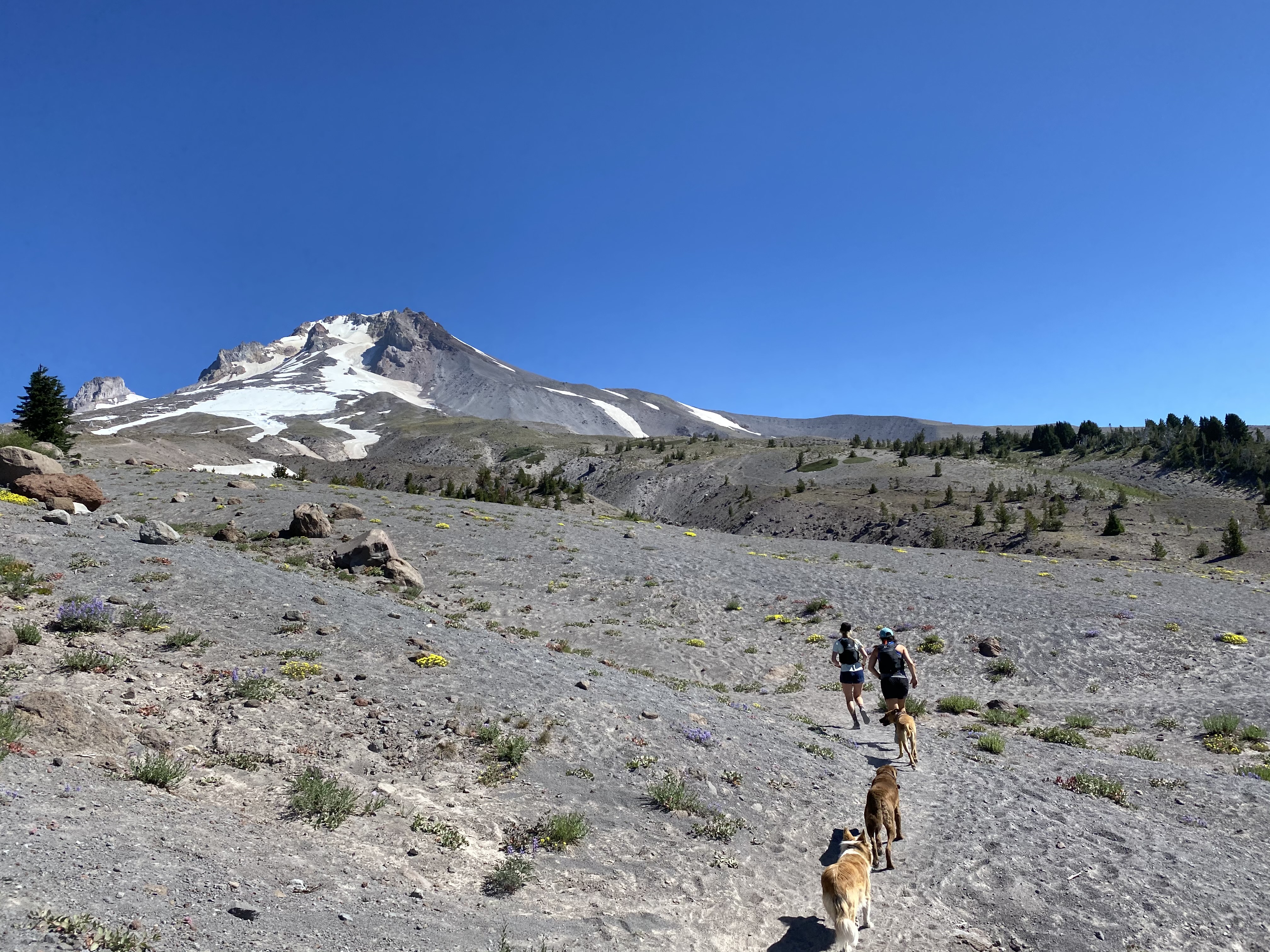 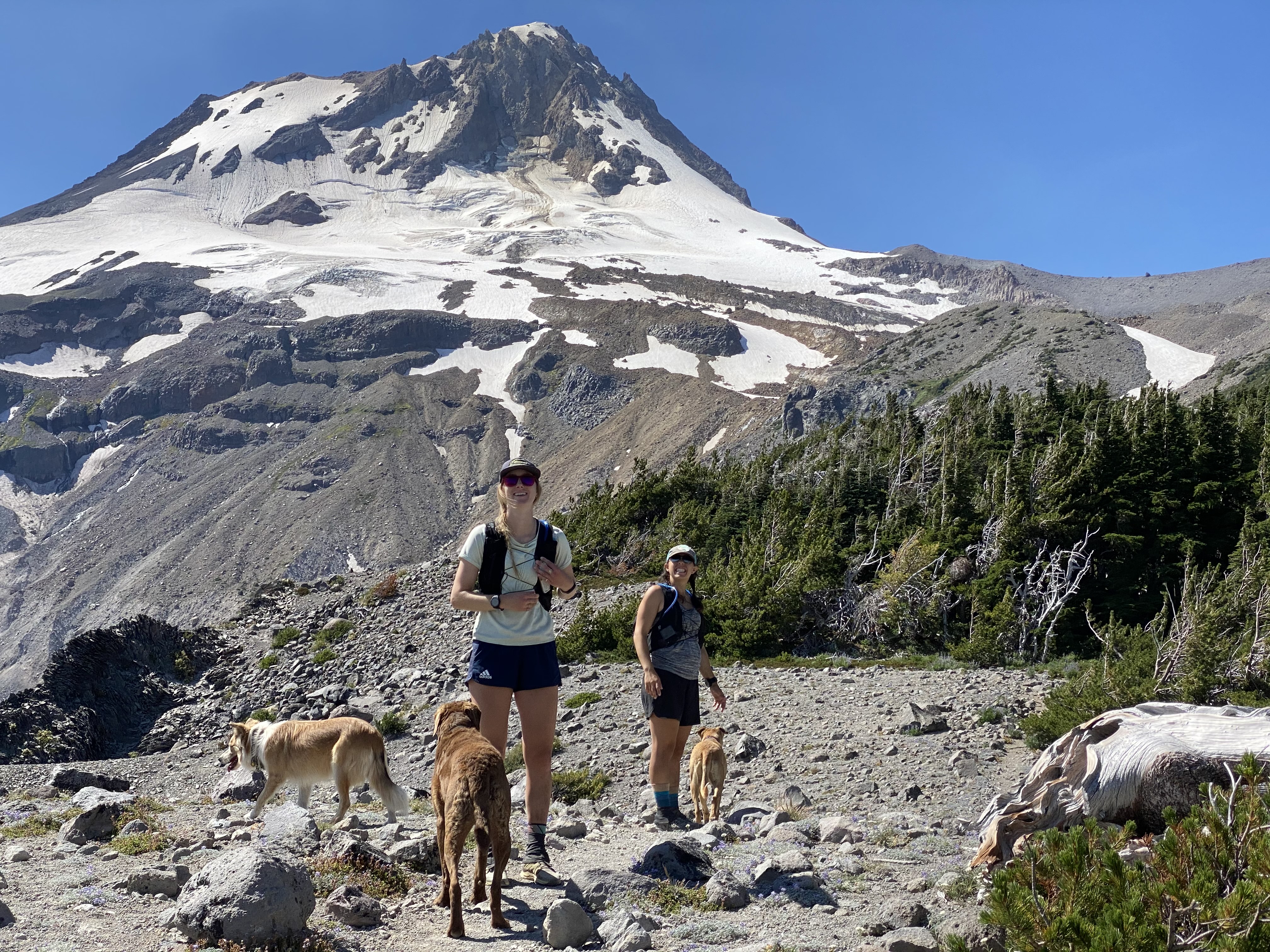 We donned our masks and kept moving toward White River, past Mt. Hood Meadows and Heather Canyon.  We eventually, and quite happily reached the high point above Gnarl Ridge just South of Cloudcap!  We were treated to adequate water, comfortable temps and even a little breeze all the way down to the Eliot River crossing, which had a much welcomed, easily accessible log spanning the entire width! 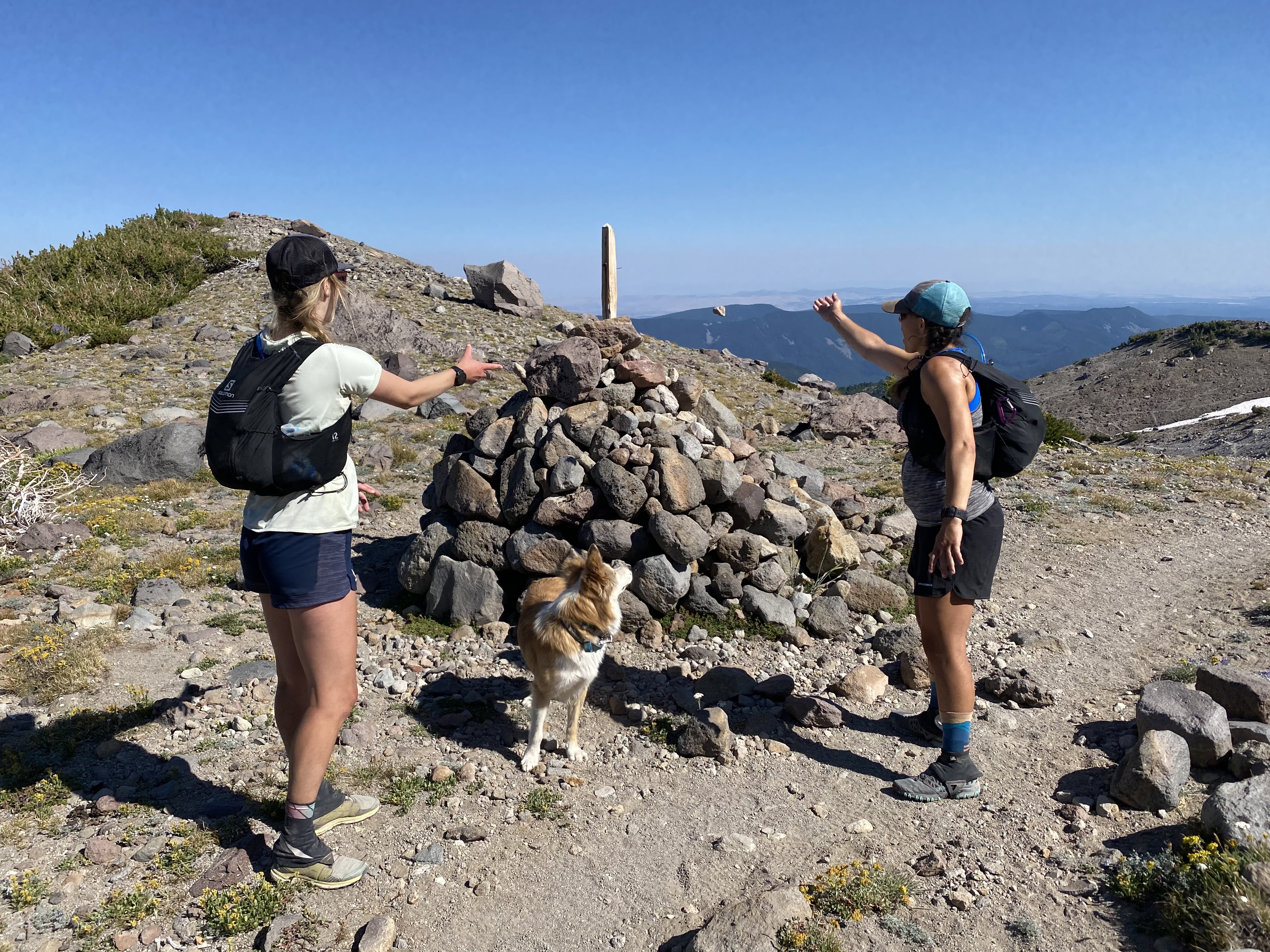 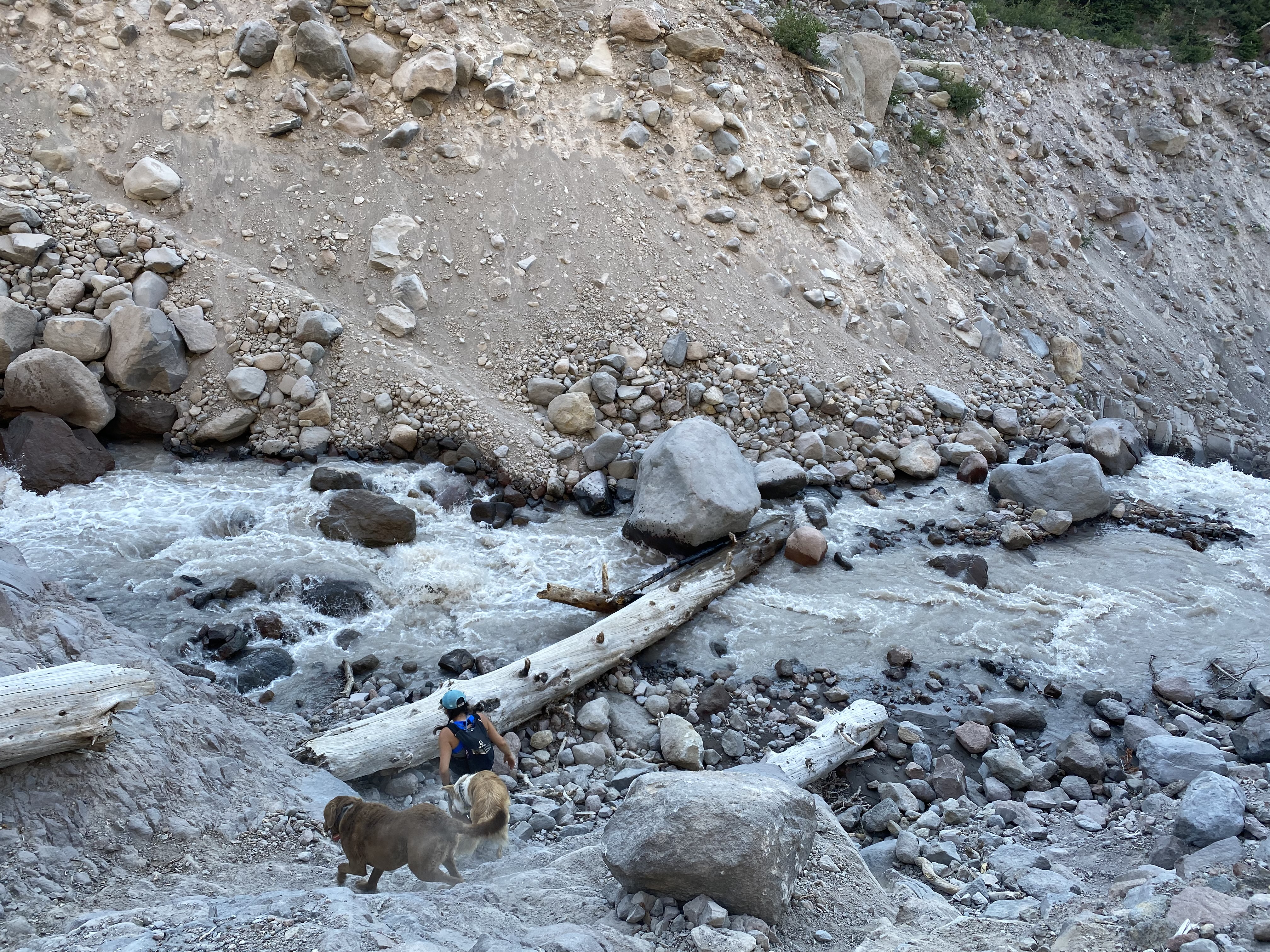 Then came the Coe!  There is a reason it is HIGHLY recommended to cross all water before 3-4:00 PM when navigating the Timberline trail! Had we started at Midnight or 2 AM the night before (or if we were several shades faster!) we could have heeded this advice.  However, we knew we would be putting ourselves in the "crossing in the evening" position, so we were prepared!  Prepared to use the tools and skills we had to get ourselves and creatures safely across all of the water crossings!  As backup I had brought a rope that we could make a harness out of for the dogs, or use to belay each other across.  Luckily none of that was necessary and we managed to get all across without much drama, although I did wade into the Coe up to my hips to get my creatures safely across!  At no point in time did any Humans feel like we were in danger, so our main goal/outcome was to keep the pups safe! After the Coe it was pretty much all downhill, literally and figuratively.

We took in the beauty of the pre-sunset Alpenglow on Mt. Hood and were treated to a stellar view of sunset over St. Helens, Adams and Rainier.  After a few more miles and a couple creek crossings in the dark we happily met back up with the rocky, rooty, dark Top Spur trail, which meant we only had 1/2 mile back to our cars, and burritos......Ah, Burritos! We finished our adventure with Burritos, beer and one more night sleeping at the Trail head because it was unnecessary and unsafe to drive home at Midnight after running 43 miles! 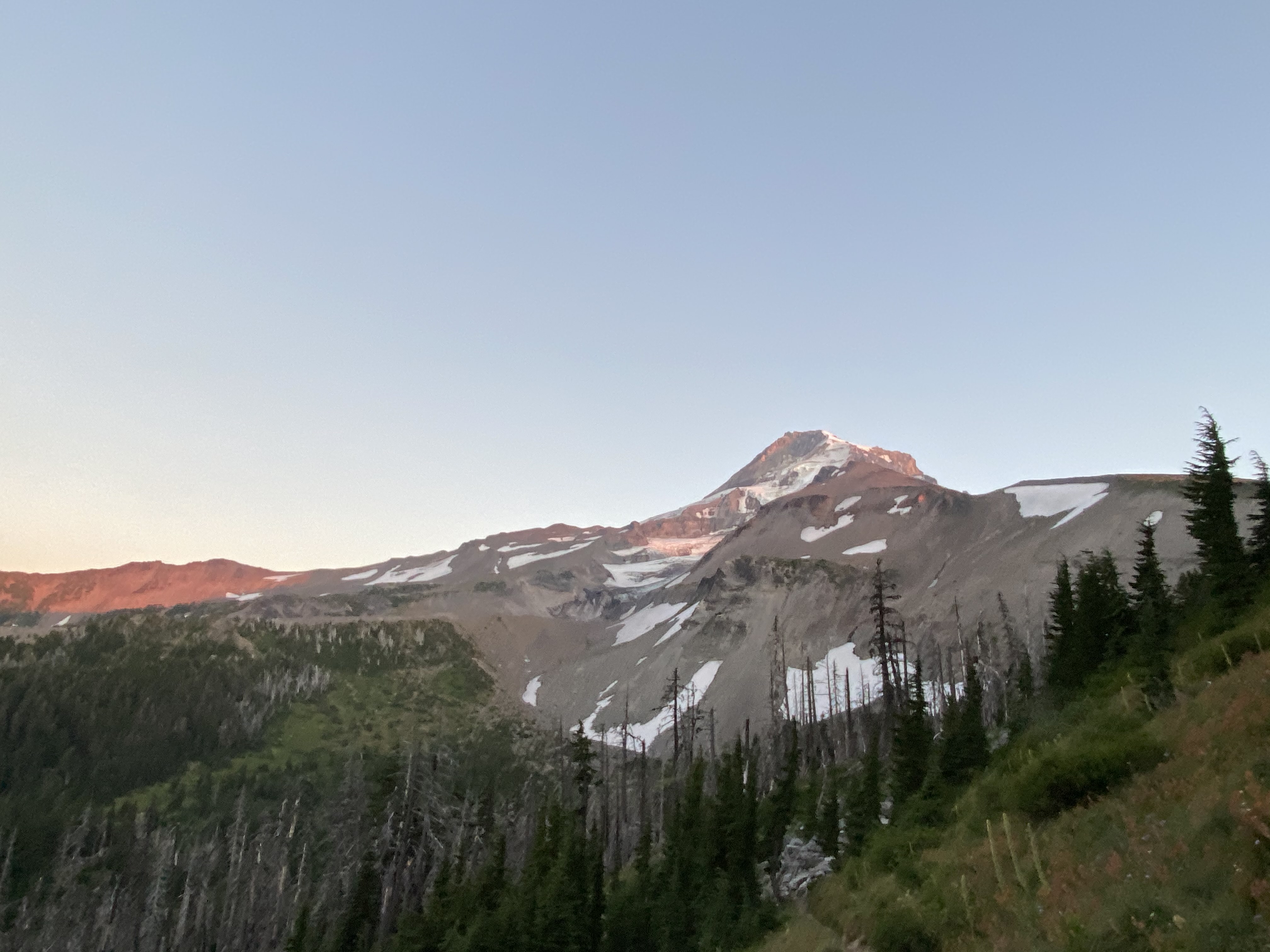 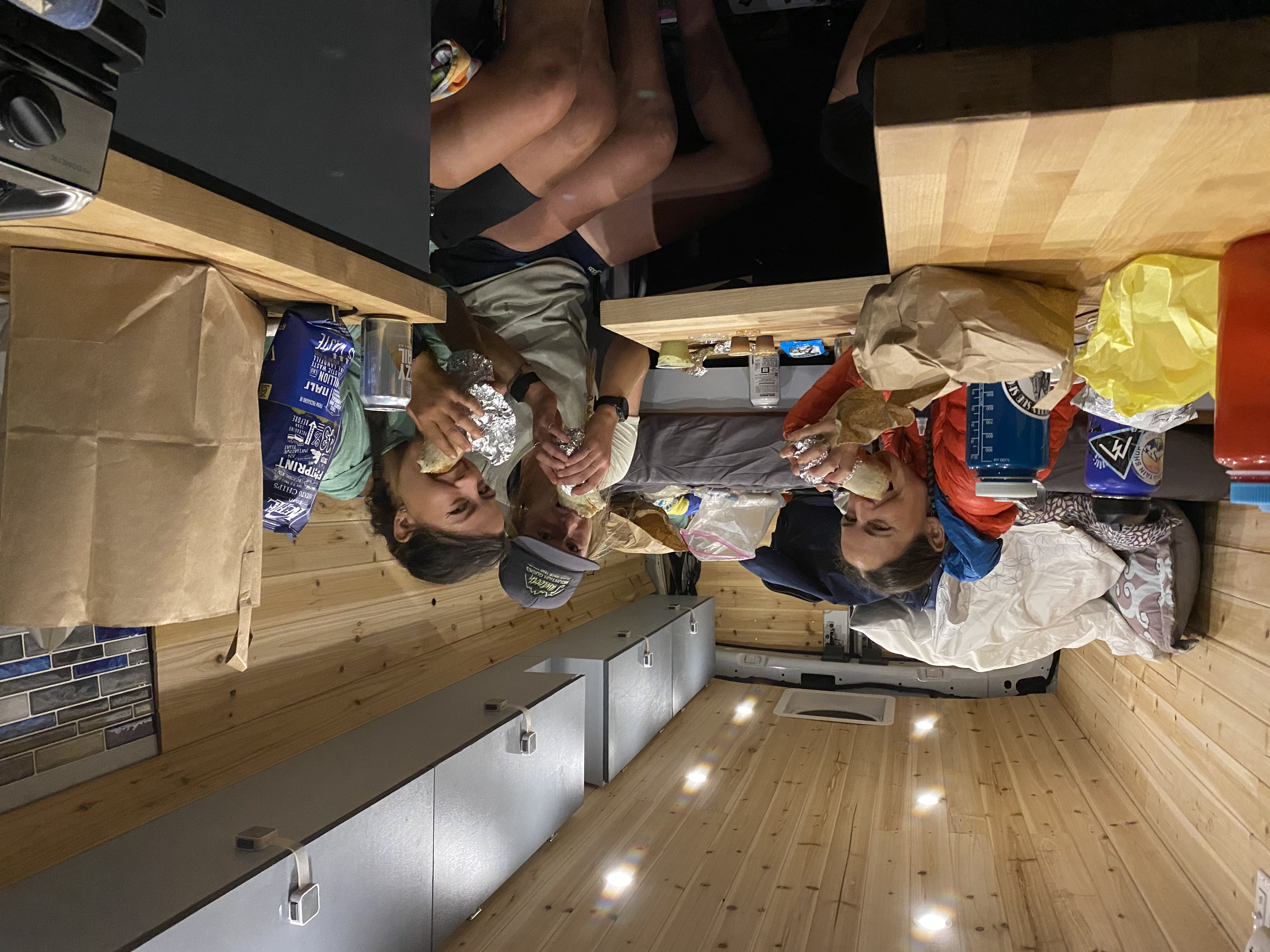 Highs: The whole trail was a positive experience.  At no point in time did I ever feel like I wouldn't or couldn't finish.  I also did not feel this about my furry companions who have been training with me for months/years to run crazy long distances.  I would not take them if I didn't think they could make it.  I would also not have taken them if temps were going to be too extreme for them, but we lucked out with a strategically chosen route, a high somewhere in the 60's, a nice breeze and plenty of water! The company of Liz and Mal was enjoyable and appreciated!  We all kept each other going along the way and worked through problems/route choosing/finding together.  Not once did we have a breakdown in communication or morale, which speaks loads for choosing your running buddies wisely, even when you don't know them very well!

Lows: Crossing the Coe River was really the only slightly stressful experience, and it wasn't really that bad! No other lows to speak of, in fact, all of us are excited to do it again, maybe even this season! And we are all in agreement that running it is waaaaaay more enjoyable than backpacking it! There is NOTHING flat about this trail! 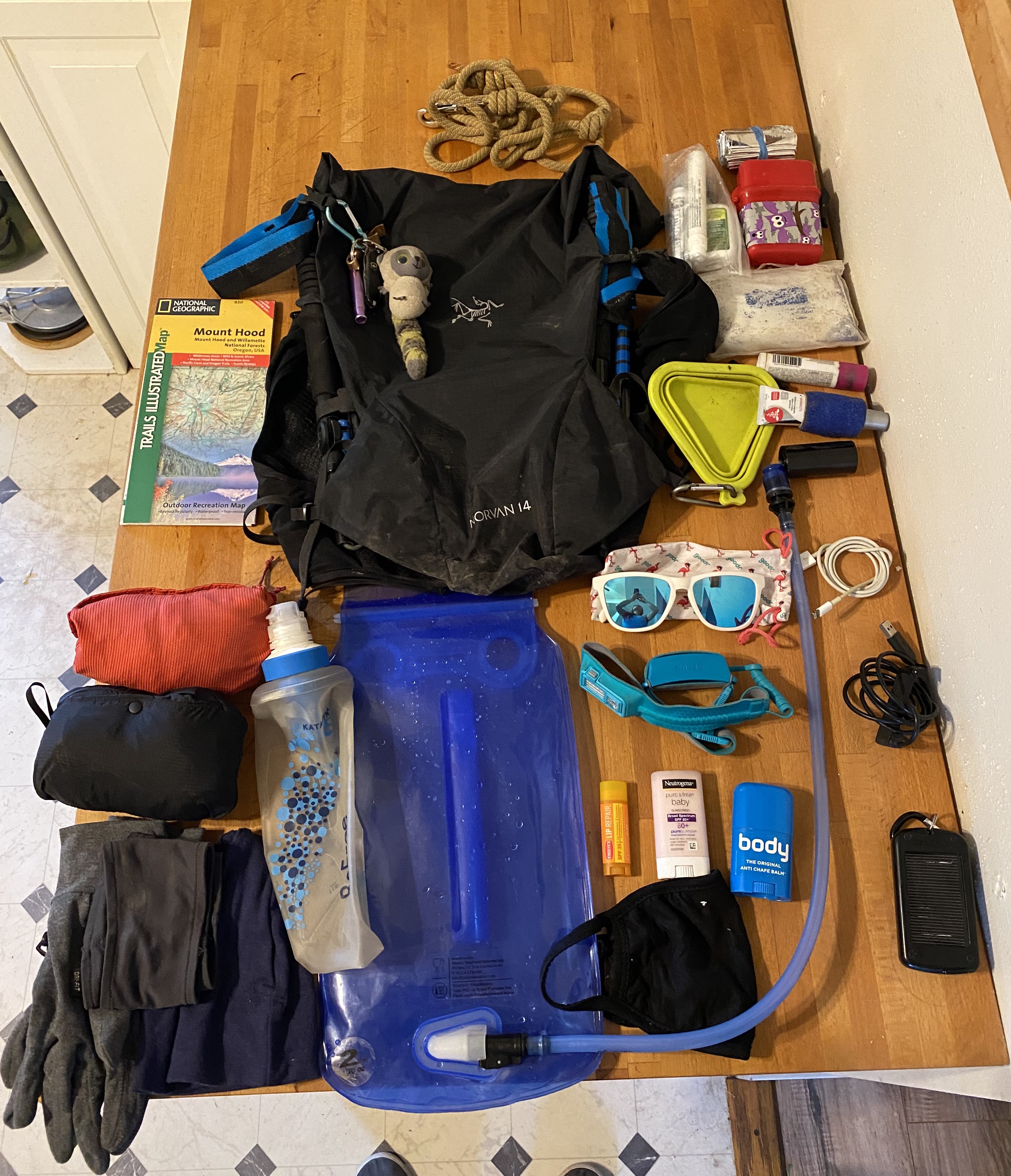 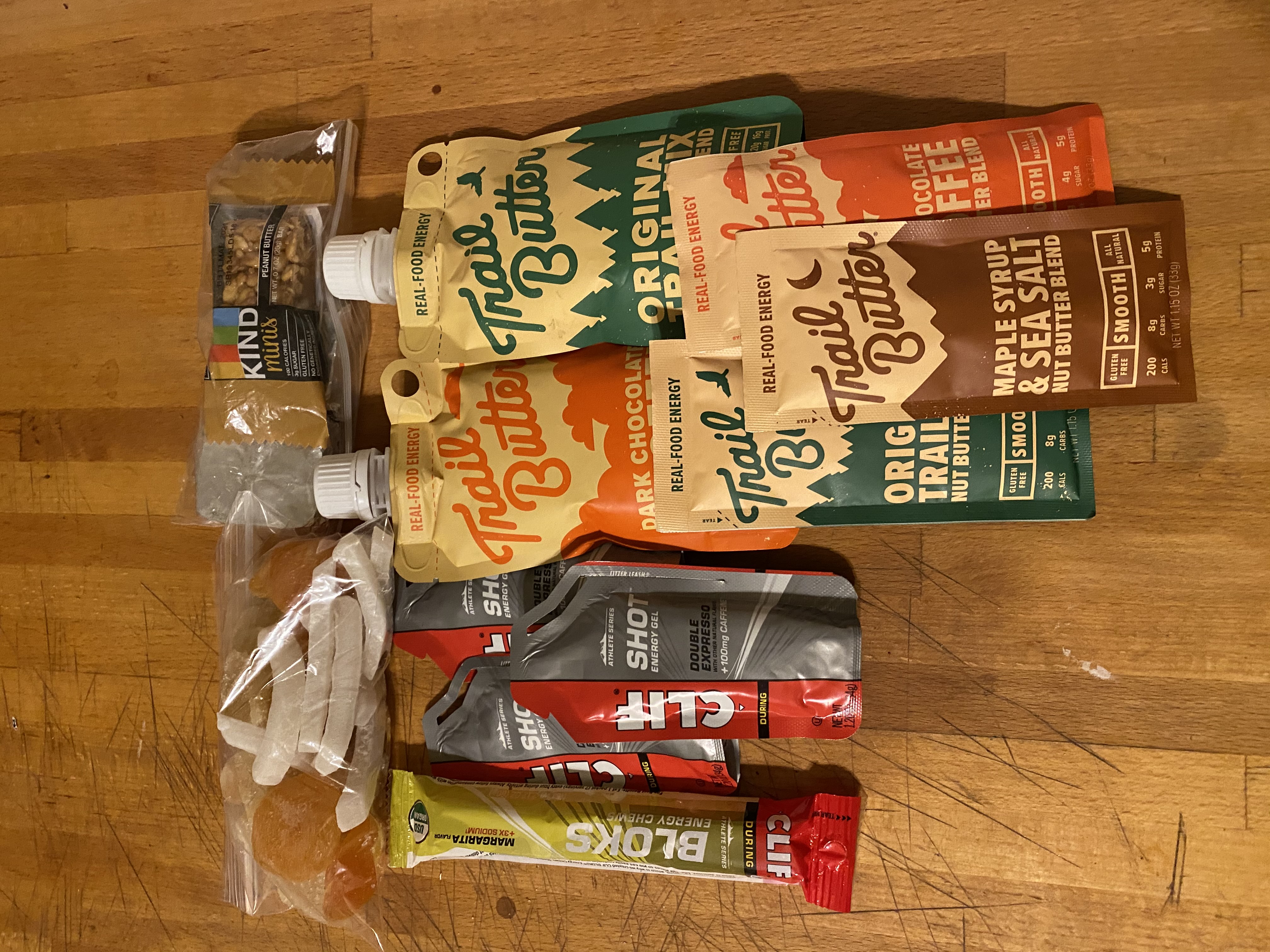