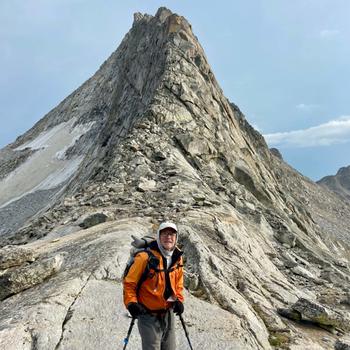 Gary was born and raised in North Carolina. After a three year stint in Alaska in the late 80′s he settled in Portland and is happy to call Oregon home. Gary has worked in outdoor retail for over 28 years, and has been at the Mountain Shop since October 2012.  He simply loves life in the outdoors and loves to share his experience in helping others choose the right gear, especially if it means lightening their pack. Over the years he has enjoyed hiking, backpacking, rock climbing, mountaineering, and bicycling. His greatest accomplishment in the mountains was a summit of Denali in 1997. His current “passion” is ultralight and long distance hiking and is a Triple Crowner, completing the Pacific Crest Trail in 2012, the Continental Divide Trail in 2014, and the Appalachian Trail in 2016.  He added the Pacific Northwest Trail to his resume in 2017. You could say he loves to hike.