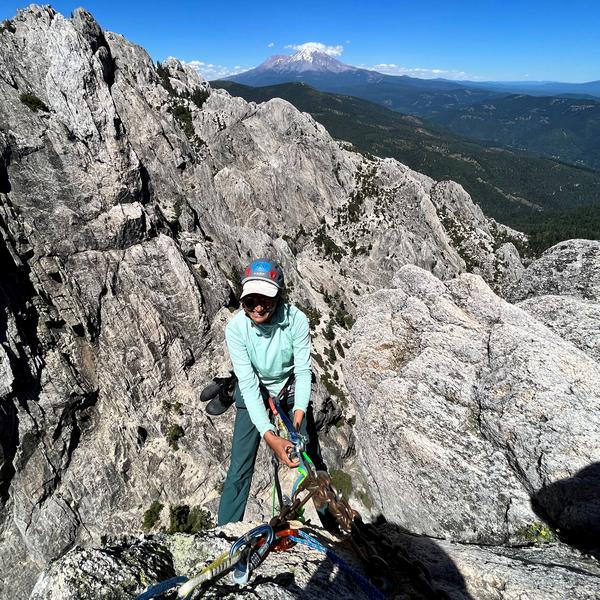 The Ogre is a large granite formation within the Castle Crags State Park in northern California. As the name indicates, the 1000 foot east face resembles the face of an Ogre. Most of the established routes climb the longest section of the east face, following weaknesses and dykes. They are all multi-pitch trad affairs involving considerable run-outs. The routes range from 5.6 to 5.10d. Standard descent from the summit involves a single or two raps down the North East face into a gully which leads back to the base.

I set up a climb of Cosmic Wall with the Mazamas, specifically geared towards a wide range of experiences. Each team was built around an experienced lead climber, an experienced lead belayer and an inexperienced follower that had the qualifications to climb outdoors above 5.6.
The entire team left Portland at various times on Friday. Campsites were reserved at Castle Crag State Park where we could get some rest prior to our anticipated 5:30 am start time. The following day was anticipated to be somewhat warm, so getting an early startmade this climb a bit more comfortable. 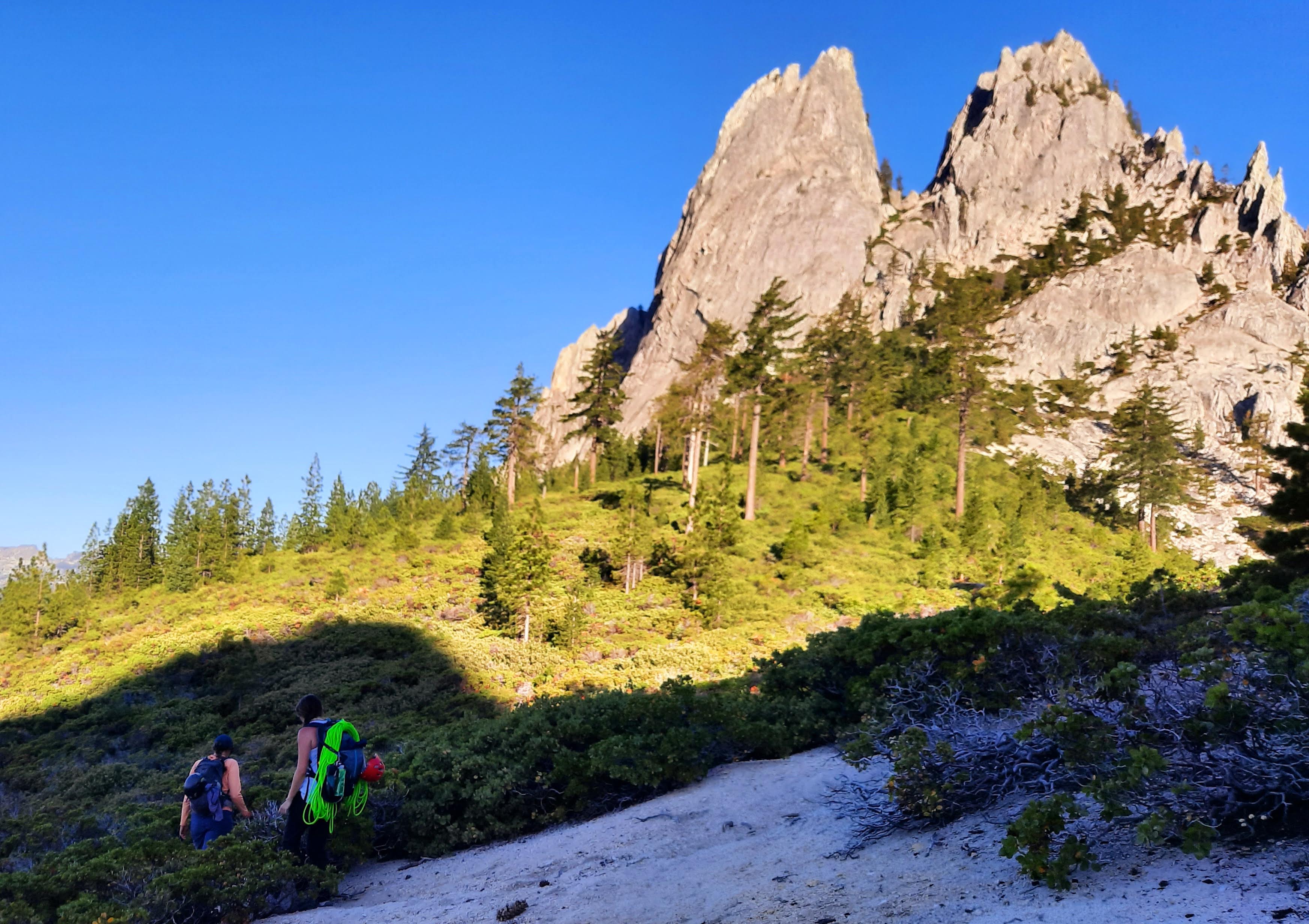 The 3 mile approach isn’t too terrible, but begins to make elevation quite quickly. We made a slow but steady pace to the Castle Crags Basin with a couple stops to regroup, adjust clothing and refuel. 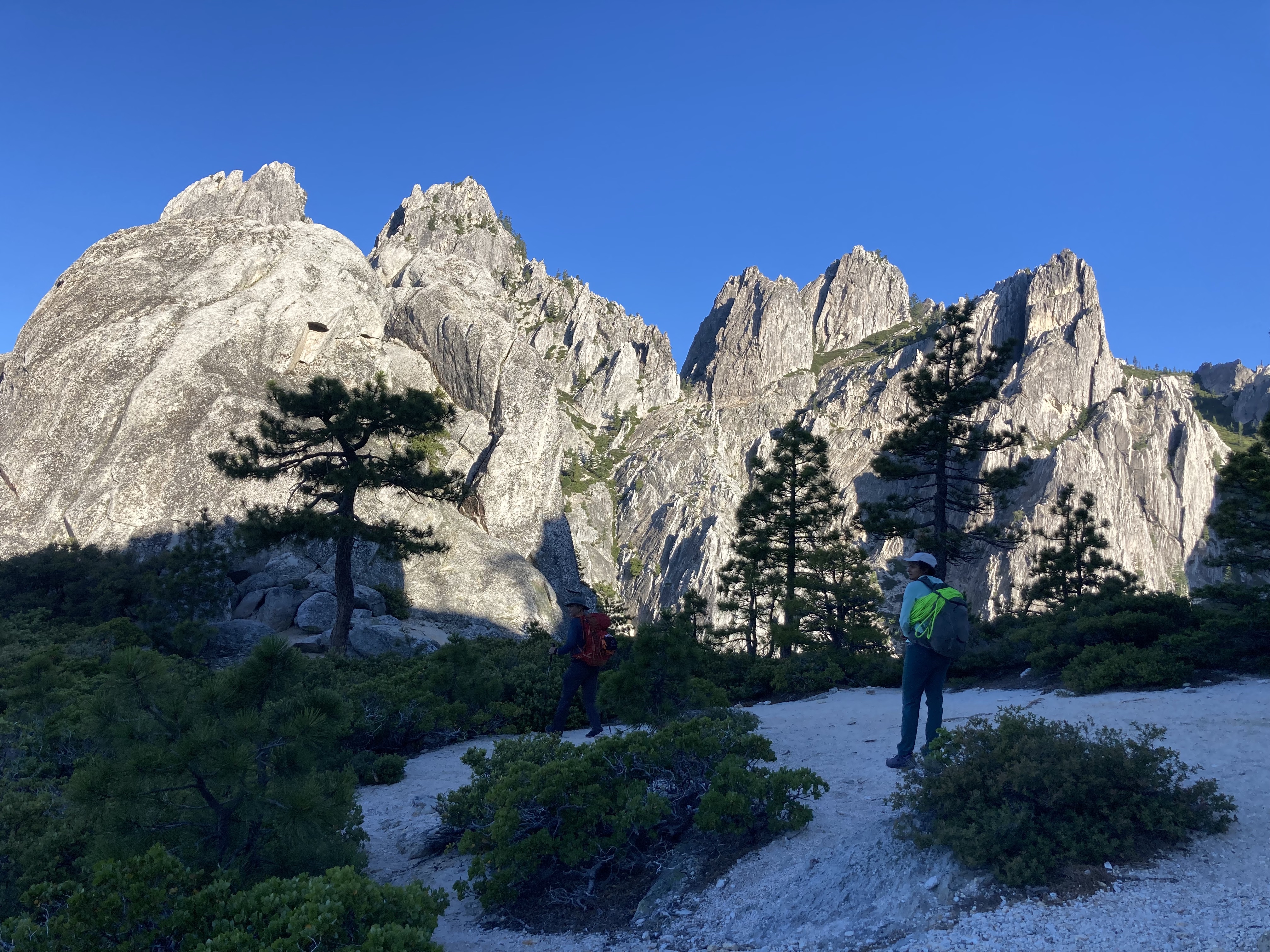 The park rangers have made an effort to keep people on the trail and out of the washes, so we made our way to the end of the trail where it becomes a choose your own adventure through the manzanita shrubs to the base of the climb. Long sleeves and pants are recommended through this portion. 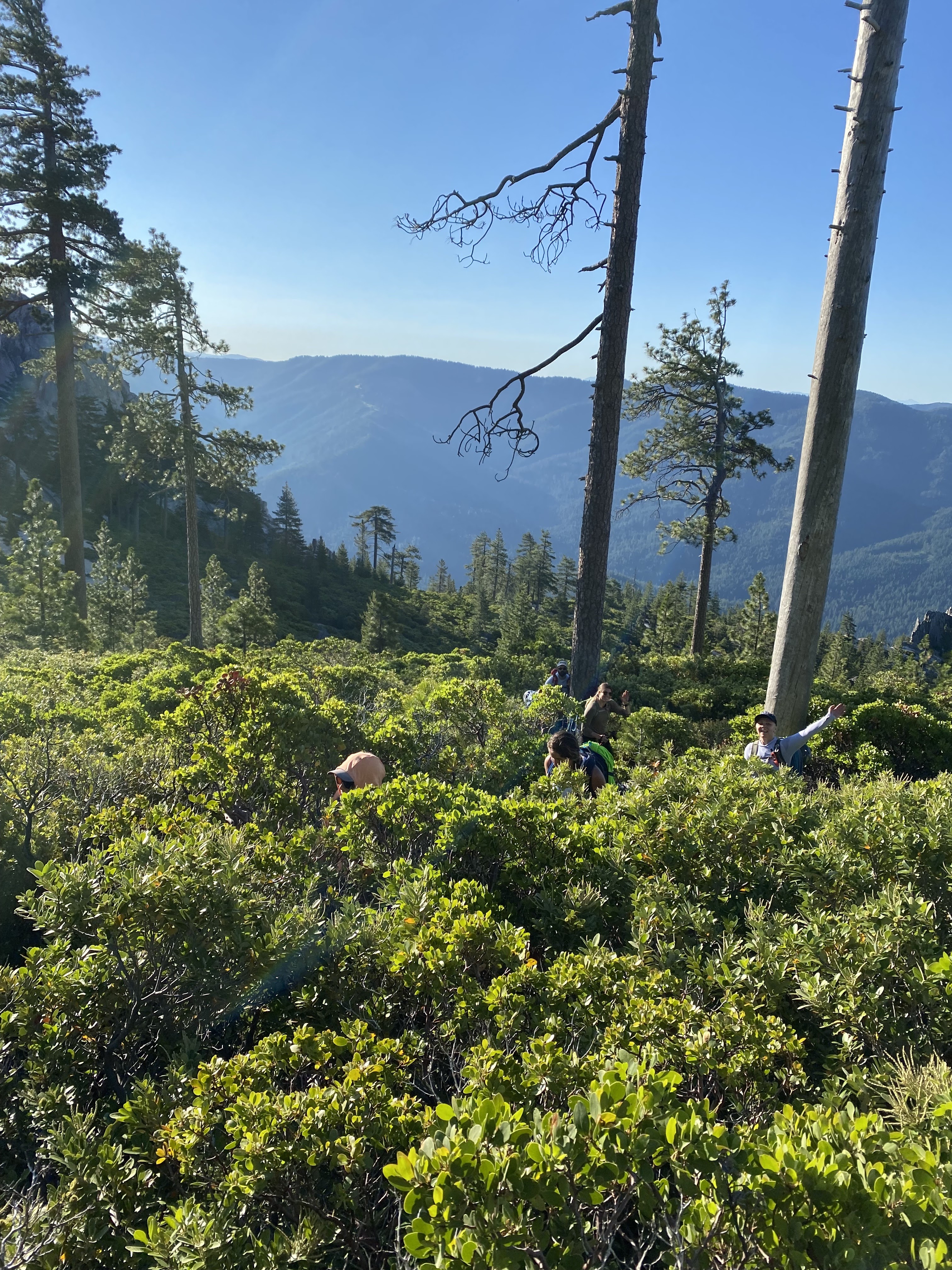 We arrived at the obvious base of the climb at 7:30 am and began readying ourselves for the day, coordinating between teams and discussing the route. The first team flaked their rope as others prepared a summit bag with water and snacks. 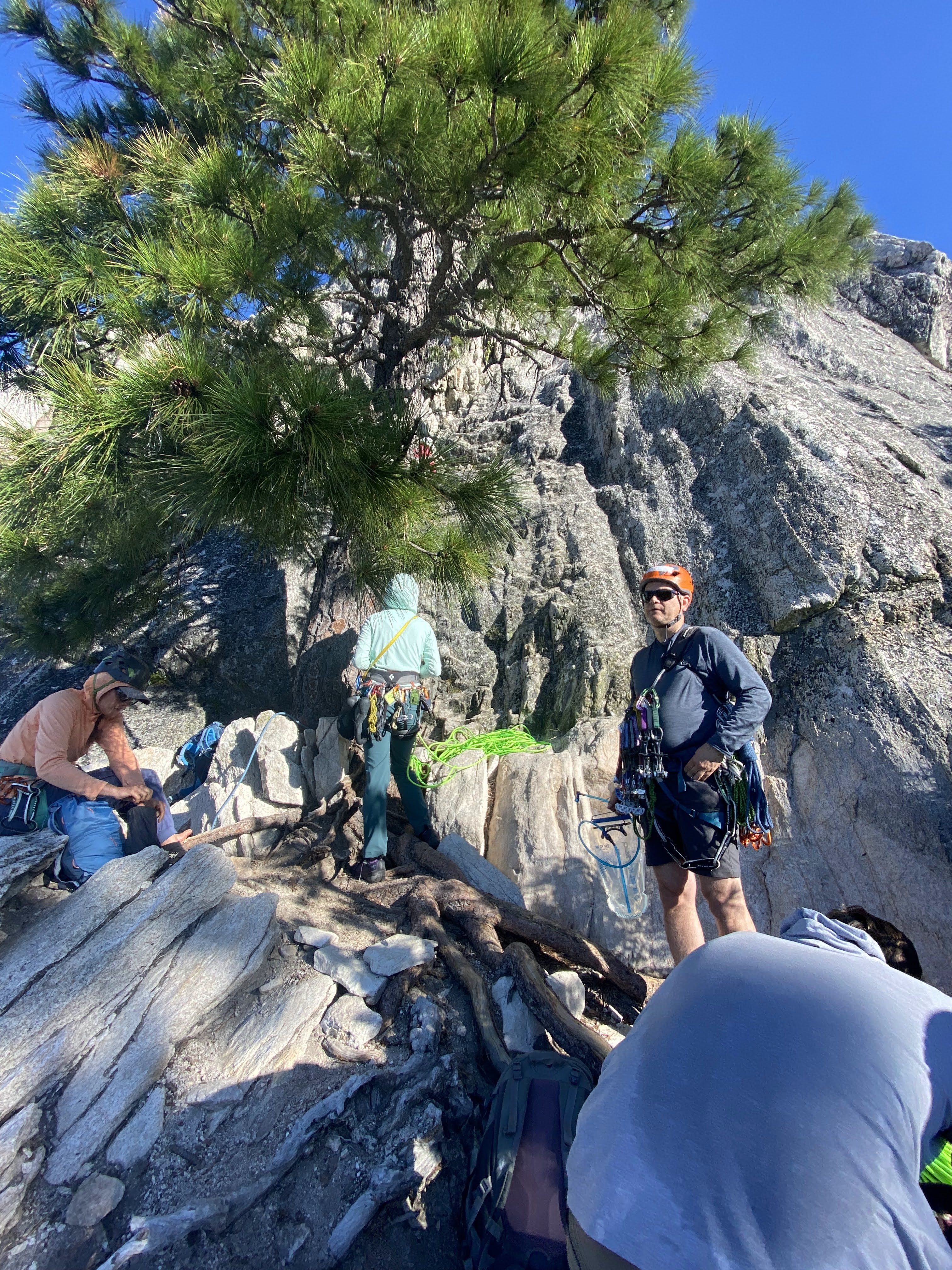 I purposely placed myself as the middle team so that I could see both teams throughout the day and assist the lead climbers that have not been on the route.
The first team began climbing around 7:50. Our team began climbing at 8:30 am.
Pitch 1: (5.4, 200 feet) The first pitch is fairly easy climbing with decent protection in the lower 2/3’s of the climb. The protection gets a bit thin near the upper portion. There is an obvious ledge with a tree to build an anchor. 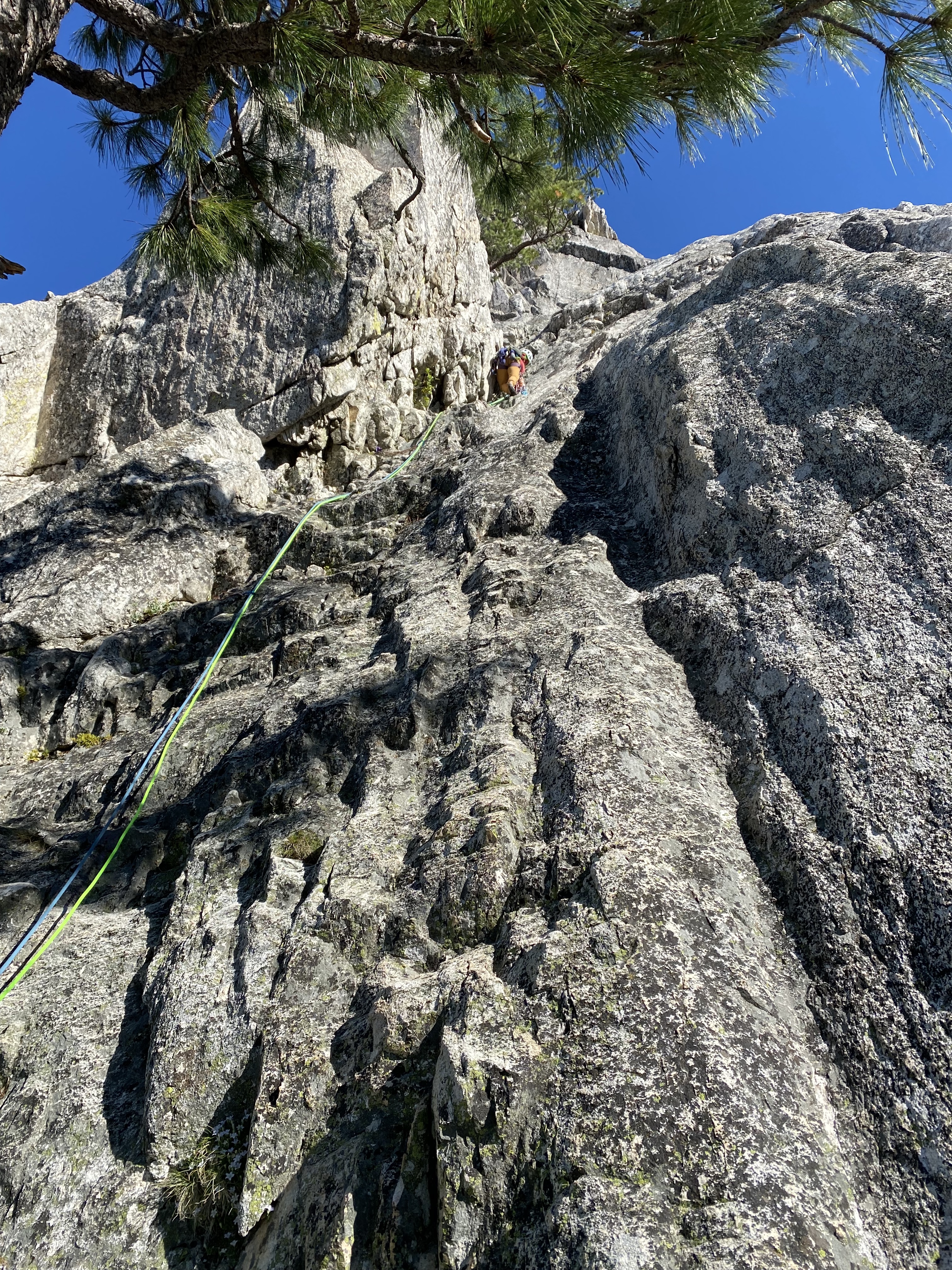 Pitch 2: (5.6, 100 feet) This pitch is a bit less obvious, but you can see the next anchor point at the top of a ledge with a bolted anchor. Once you make it past the first 30 feet, it protects fairly well with a well placed piton. The last move to the belay anchor is the headiest move of this pitch. 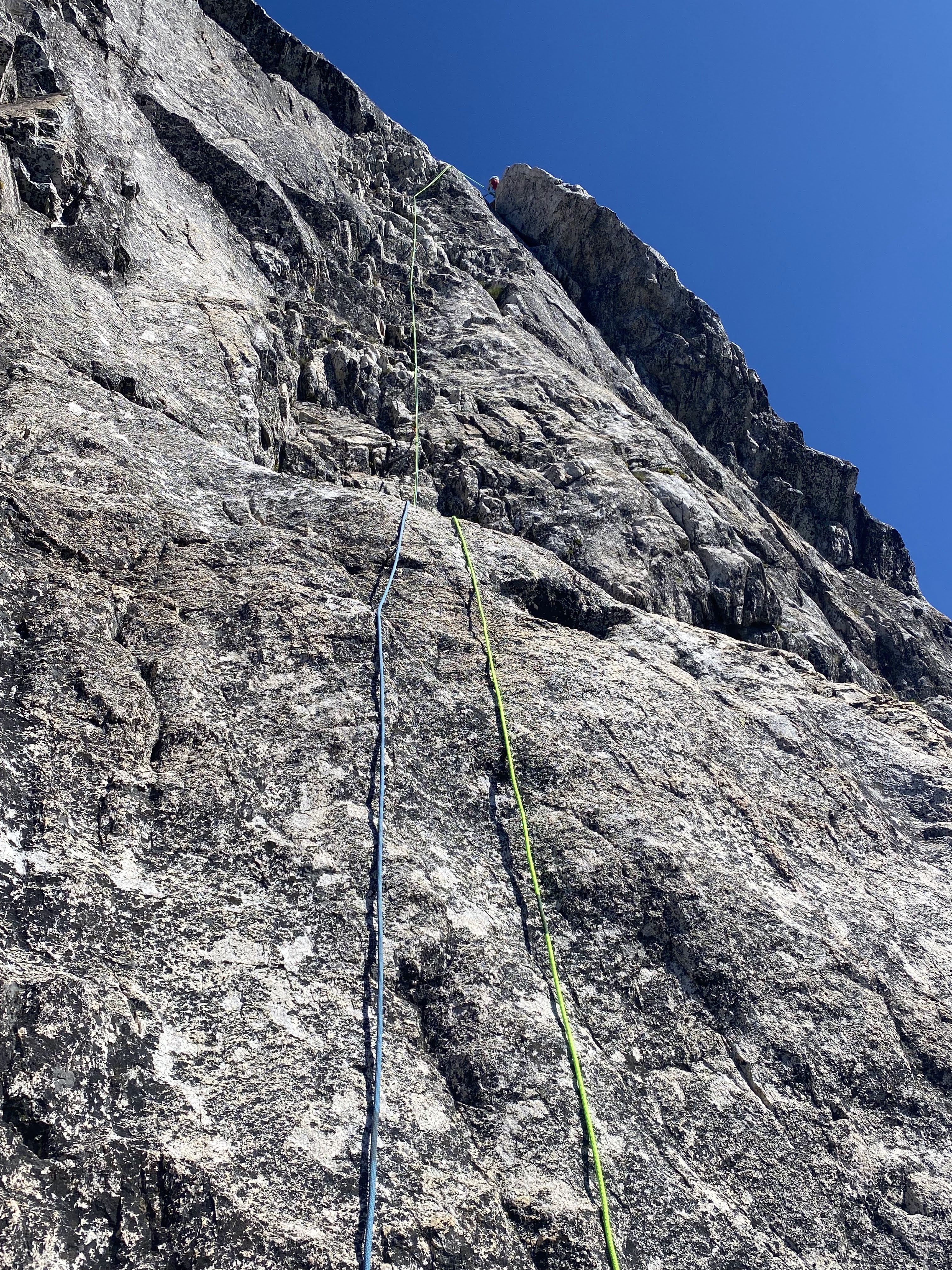 Pitch 3/4: (5.4-5, 190 feet) We all decided to combine this pitch as it would save us some time and appears to be standard practice. For newer climbers, the beginning of this pitch can be the crux. It’s an airy step, but not too difficult. This is probably the most run out pitch of the climb, but it is solid, slab climbing. There are some solid placement opportunities, but they are few and far between. There is one bolt from the remnant of the anchor for the top of pitch 3. From my past climbs of this route, this is one of the places to pay attention to where you are going. Make sure to pay attention to your route and stay to the left  and up to a ledge with a small tree for your next belay spot, rather than the obvious ramp to the climbers right. Some of the comments mention that they were doing some simul-climbing due to rope shortage. We found that a true 60 meter was no problem with 10 feet to spare. 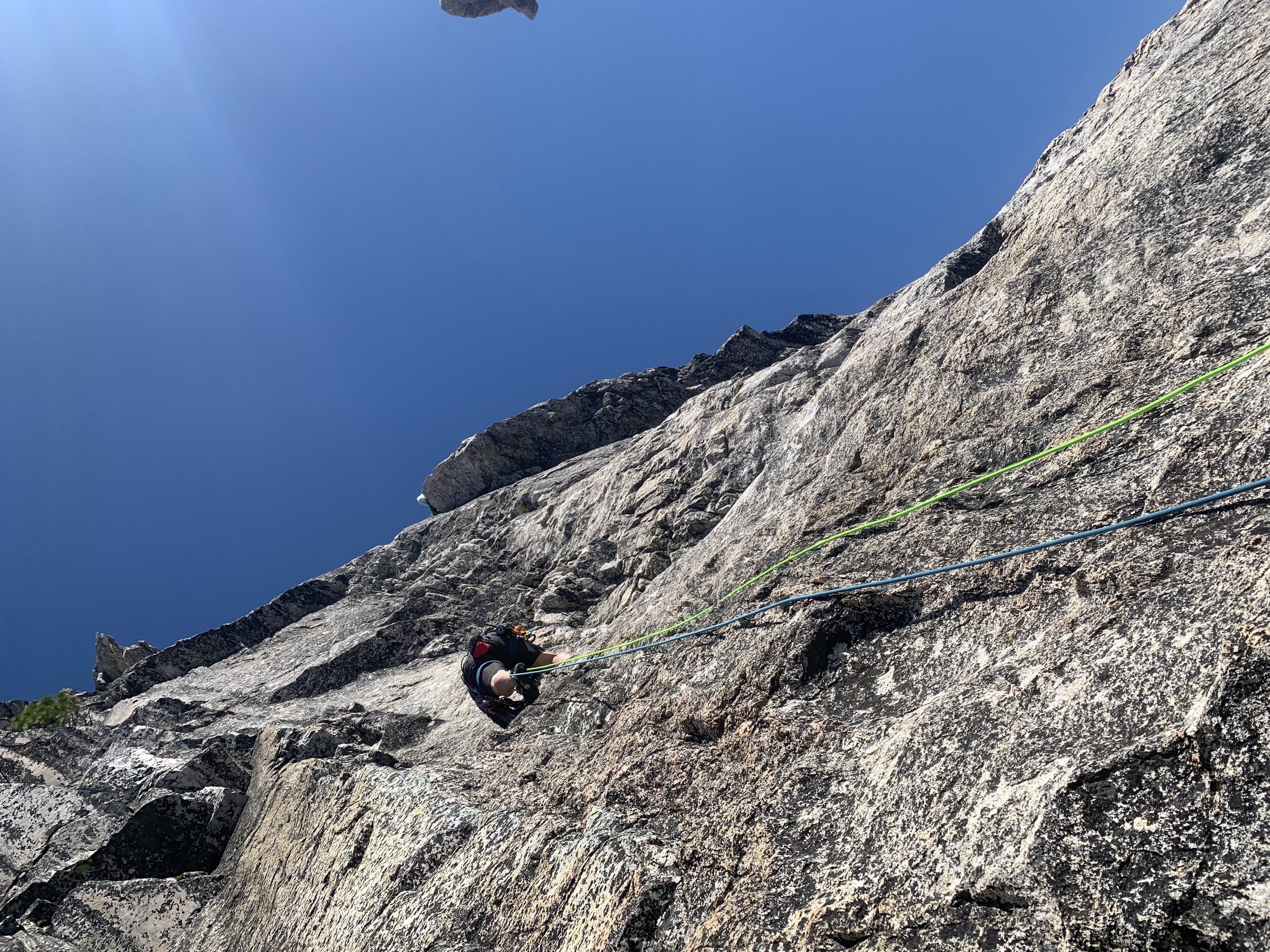 Pitch 5: (5.6, 160 feet) Our group agreed that this was probably the most challenging part of this climb.  It is the most vertical portion that is well protected, up a series of flakes to the base of the final pitch of the climb. It is a nice variation from the slab climbing in the first part of the route. 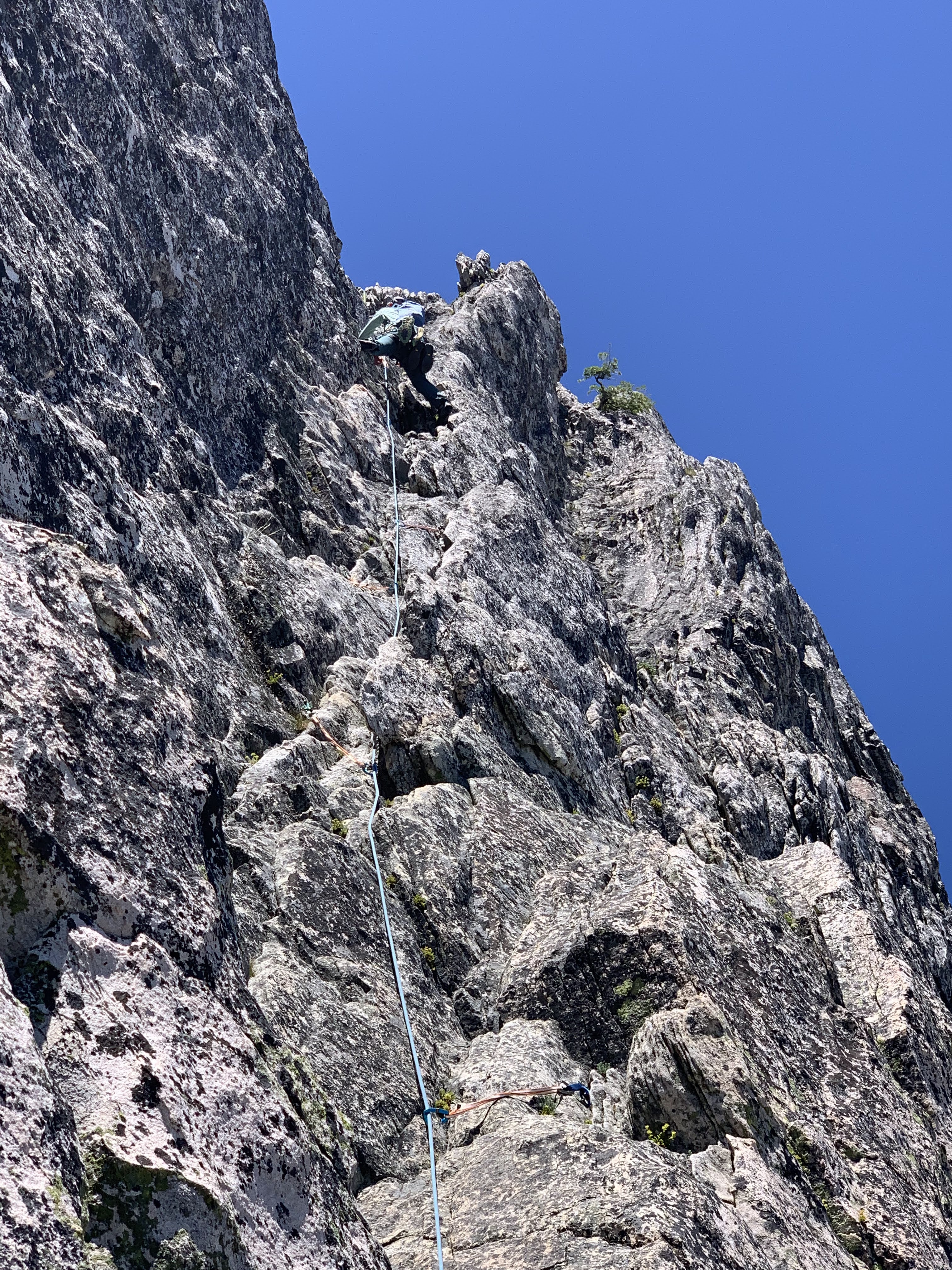 Pitch 6: (5.6, 70 feet) The route descriptions mention two ways to finish out the climb. I have done it both ways and prefer the route straight up and over the summit ridge. The climbing is a touch easier and the views are more desirable. The summit block with the rap anchors can be a bit funny to locate, but keep heading north until you can go any further, look over the edge and see the chained rap anchor. 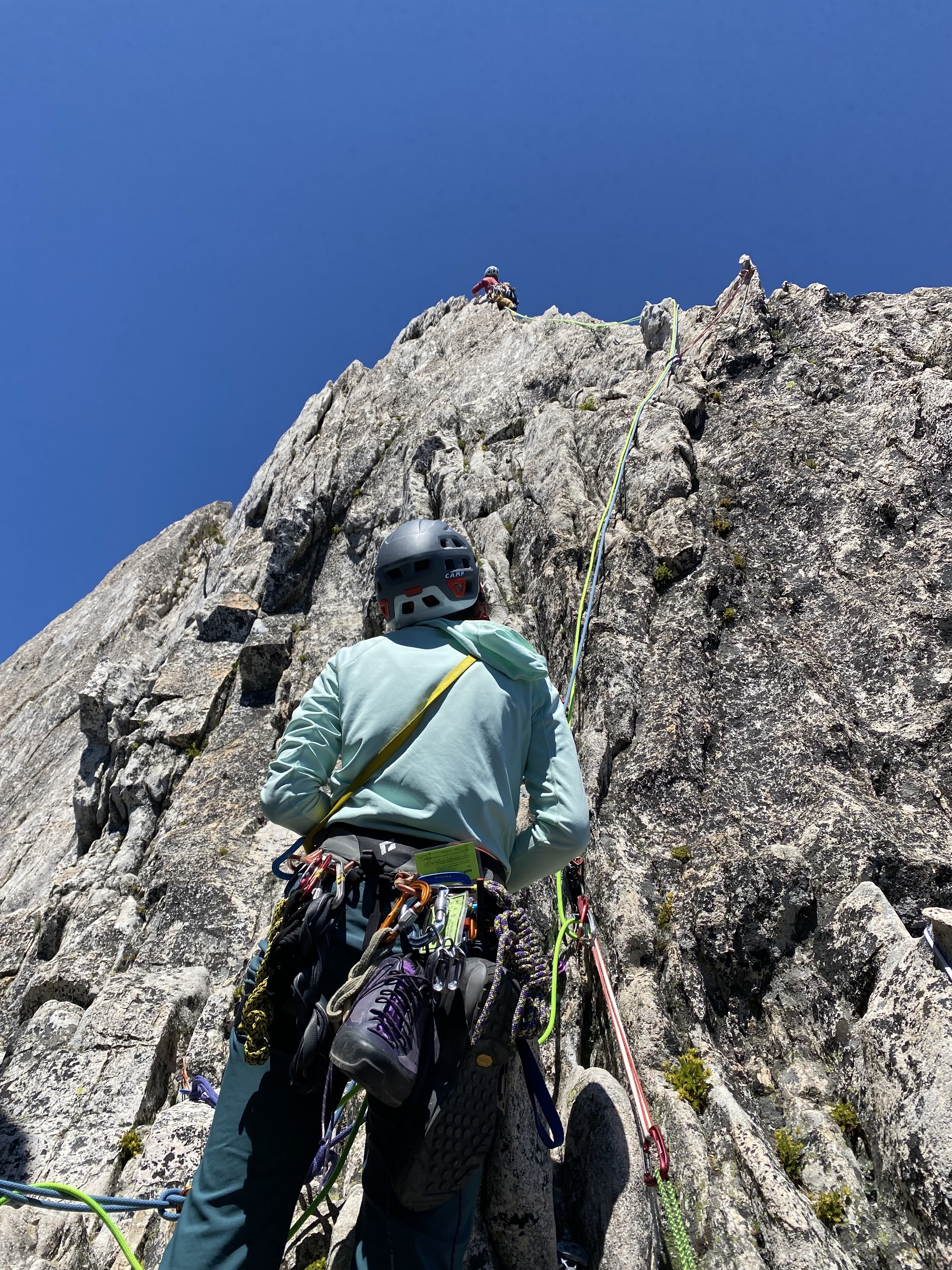 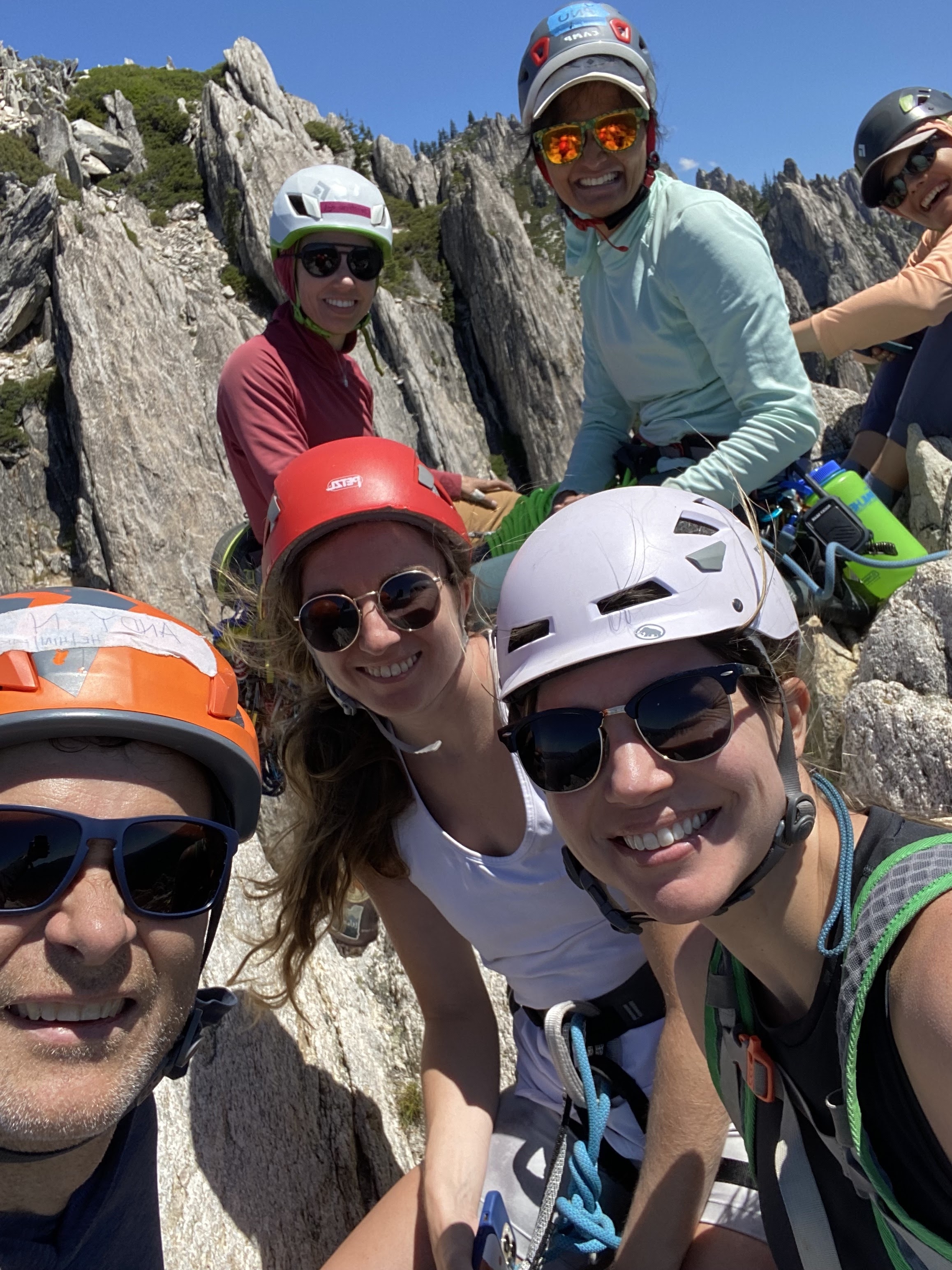 We congratulated our efforts, took in the view and began the rappel at 2:50. We chose to do a double rope rappel rather than the two rappels. One needs to take care when pulling the rope so that it doesn’t get stuck at the top. I have found if you walk away from the base, prior to pulling, the success rate is much higher. We pulled the rope shortly after 4:00. Time to descend and pick up our dropped bags. 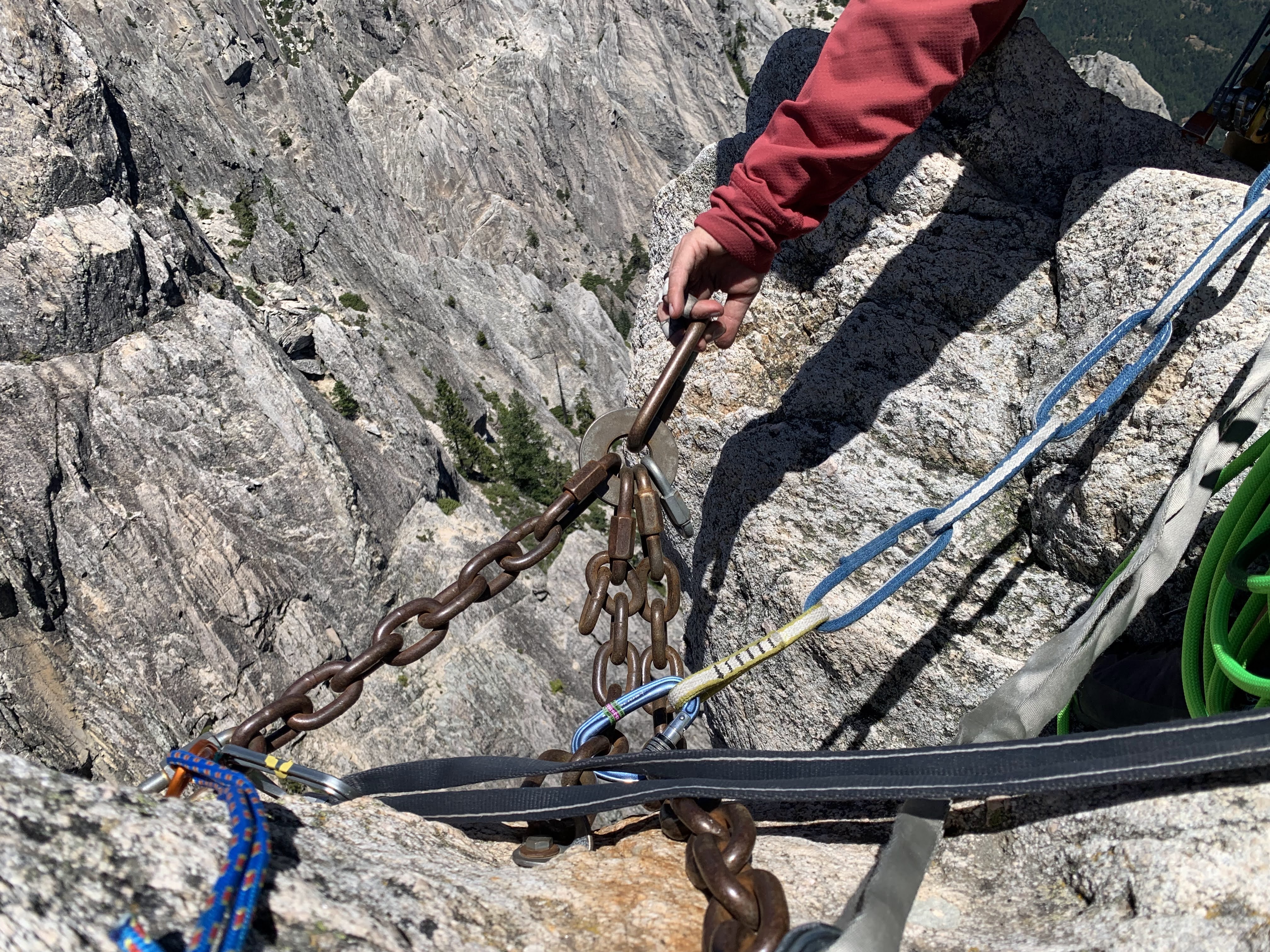 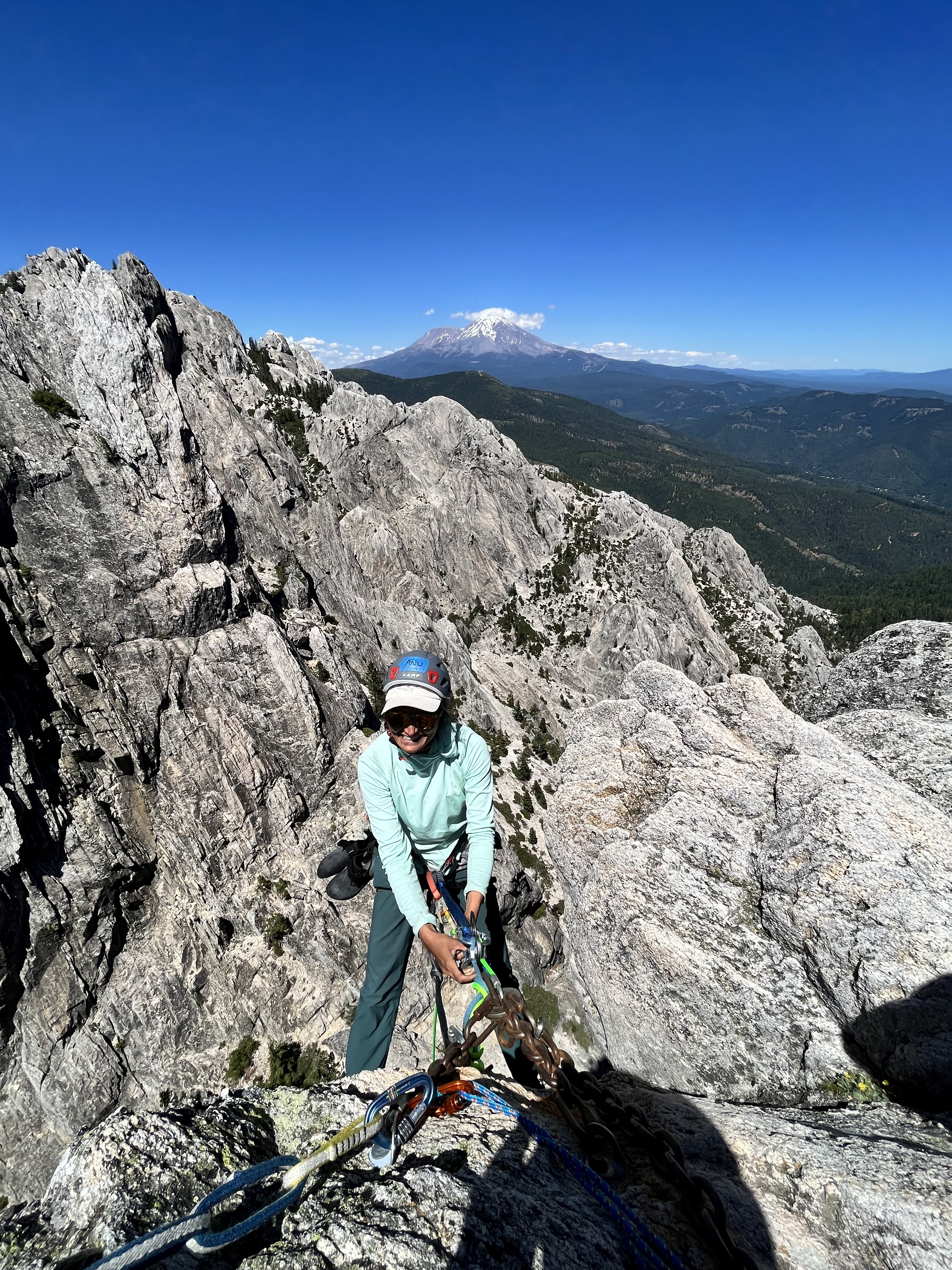 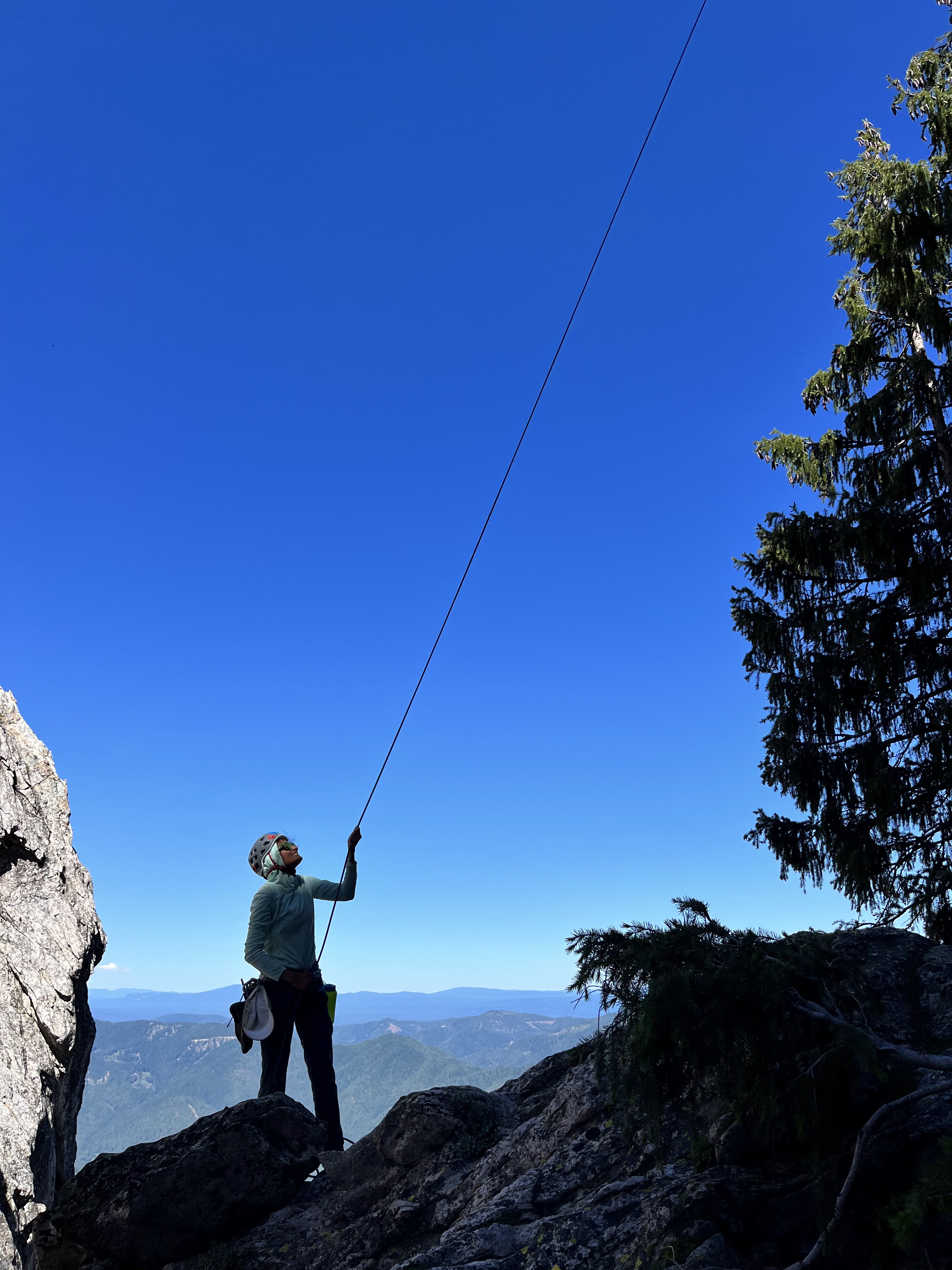 The first portion of the descent can be a bit of tricky scrambling. You want to make sure that entire party is sure footed and comfortable on loose footing. I have heard of some folks setting up a hand line or rap line in this portion for the uncomfortable folks. 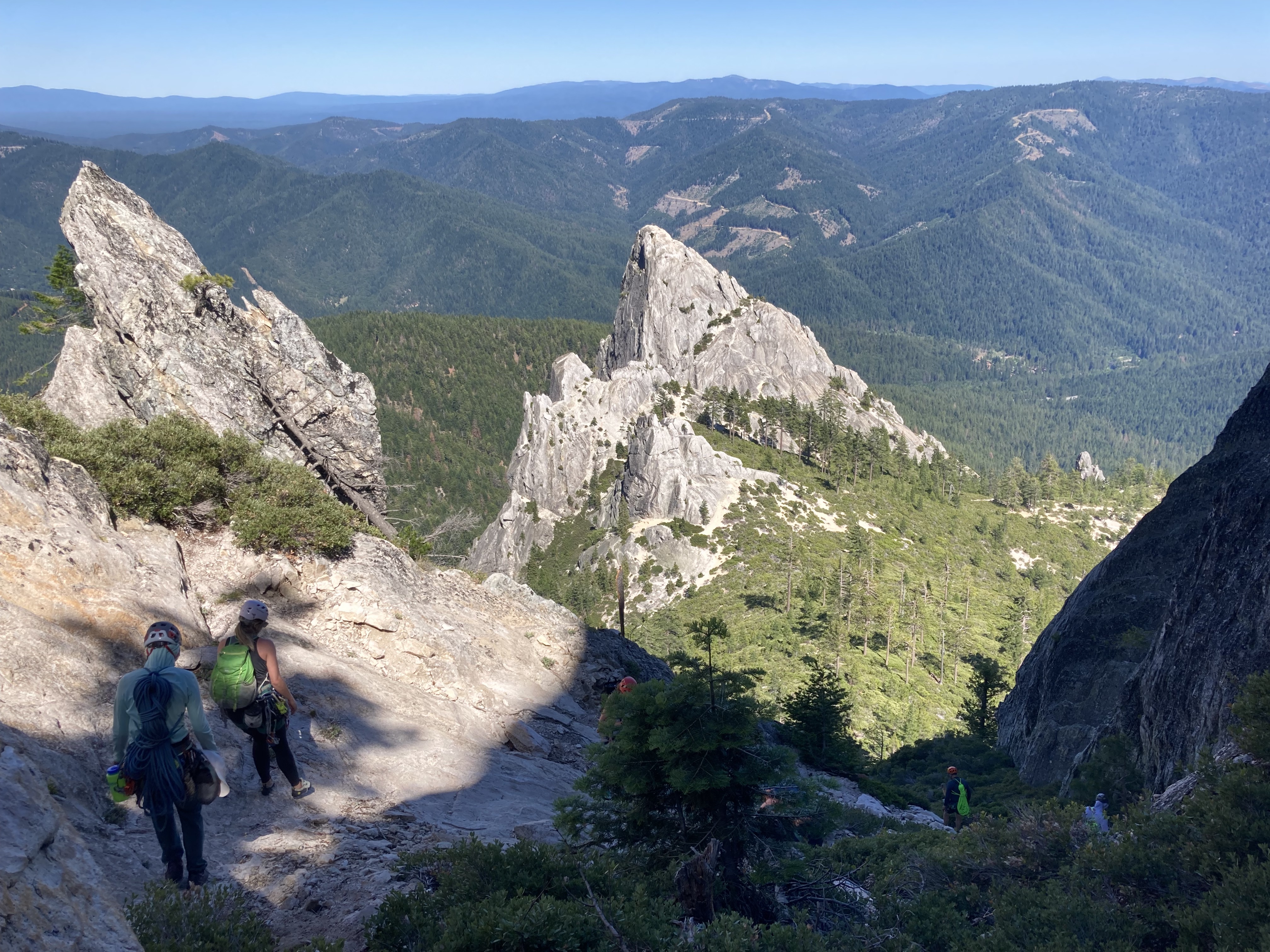 We made it back to the bags around 4:50, packed up, switched to hiking shoes and headed back to the trailhead. 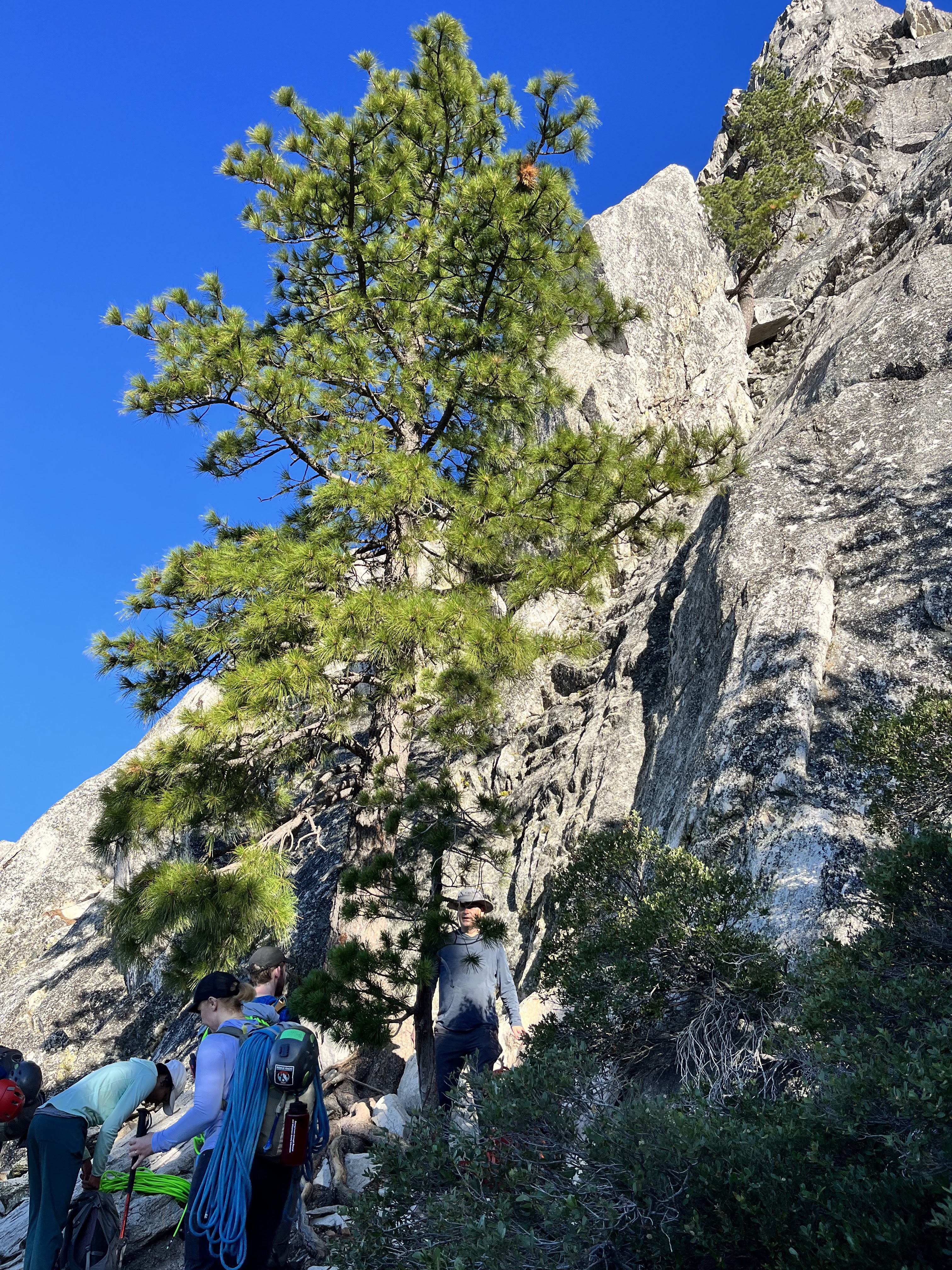 The teams made it back to the cars at 7:30 pm and drove back to debrief, clean up and enjoy the evening. Side note, if you have a portable pizza oven, it makes for a spectacular post climb dinner. 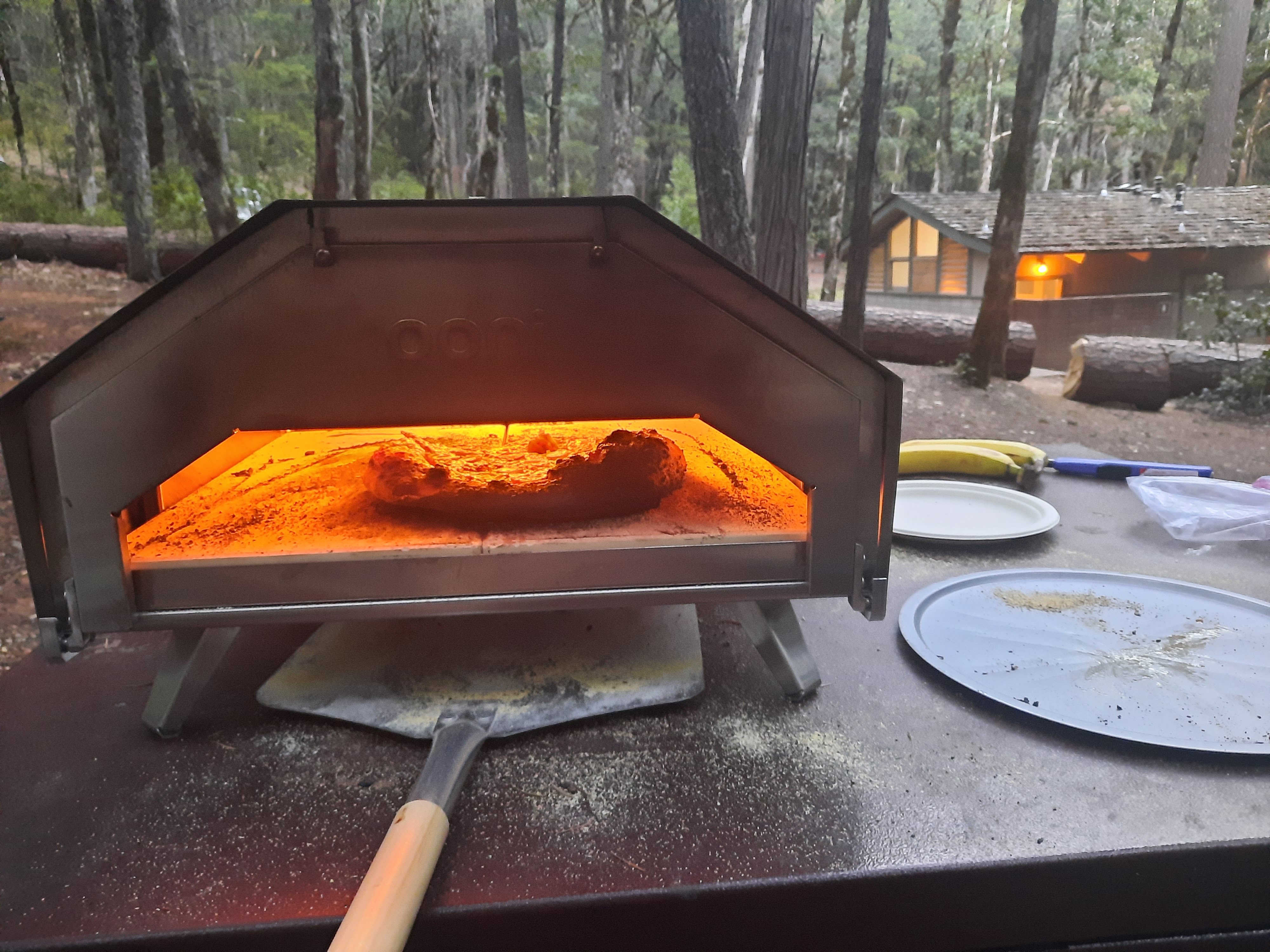 Gear used per team: Notes: We had three teams of three, which was a large group for this climb. All went well because the weather couldn’t be better, we had the entire route to ourselves and the teams were picked specifically for the objectives of the day. If I were to do this again, I would have started a bit earlier. It was a warm day and getting on the trail and heading in in the dark would not have been too much of a hassle. I think that some of the participants could have benefited from some in town training with mutli-pitch, three person teams. We could have saved some time with less mystery at the beginning of the climb. All in all, everything worked out perfectly, but could have gone sideways due to weather, more traffic or a sketched out climber.
I highly recommend this climb for folks beginning their trad climbing careers or for introducing folks to multi-pitch climbing. One of my all time favorites.
Reference:
https://www.summitpost.org/cosmic-wall/162668