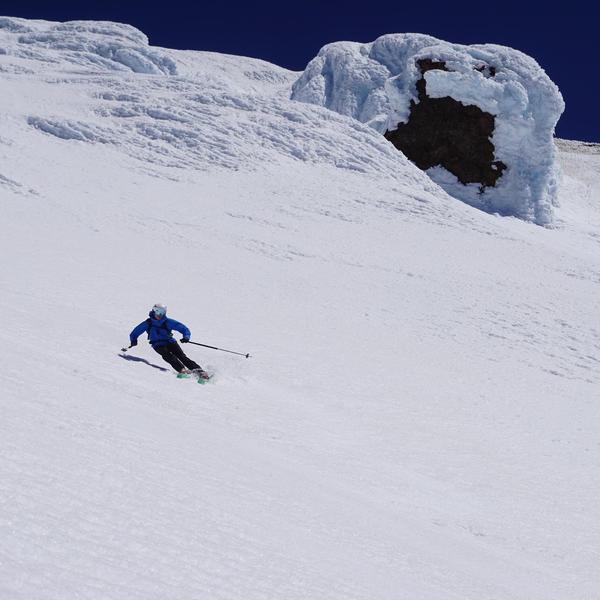 To say this past snow season was unique is an understatement. We saw a slow fall accumulation, followed by 3 weeks of unrelenting cold snow in late December. Then came almost 3 months of limited snow and a late spring/early summer that produced a bumper crop of snow in the PNW volcanoes.

Pahto (aka Mt Adams) is on my annual late season hit list due to its reliable snowpack, classic South and West facing aspects that offer up some of the best ski terrain in the range and easy trail access up and back to the trailhead. Typically, I consider late season to be early July. This summer, life got in the way of my intentions to climb and ski from mid June to mid July. Fortunately, Pahto was holding snow and my pal, Andly Lindblade, was eager to get another new (to us) route in the books before hanging up the skis for the summer. He always seems to have a couple fresh routes for us to add to the list. This time, he found inspiration from a local crusher, Sam Chaneles on his mission to this ridge the week prior. Thanks for the beta, Sam!

We drove out to the Cold Springs trailhead from Portland on Saturday, July 23rd in peak summertime conditions. We found a nice flat spot to lay out our sleeping bags in the Cold Springs parking lot and turned in for the night. Bugs also seemed to love the delayed summer weather and were in attack mode all night. I was reminded how much I need a head net to better manage the bloodthirsty mosquitoes through the night. On the upside, we were afforded some incredible stargazing of the milky way. [Sunset views of mighty Pahto on the drive in]

Our ski objective was the West Ridge, with a plan to ascend the South Spur Route. We basically ascended the right horizon line and descended the left horizon line in the image above. And then walked back below the snow line. We departed the parking lot at 6am and headed up the trail. About 3 miles and 2,500’ later, we clicked into our skis and started the mellow paced and efficient tour to the top of the mountain. Snow surface was ideal all the way to the top. While we donned ski crampons around 9,000’ at Lunch Counter, several people were happily skinning up sans ski crampons. We also saw a woman in FKT mode making exceptional time up the headwall and back down. I’d love to know her time car to car! [Prepping to drop in on the West Ridge]

We ended up on the summit in about 5 hr 30 min. After catching our breath, refueling and taking a couple summit selfies, we headed west to the Pinnacle. This was an easy ridge hop from the true summit to this third peak feature to the west. There was some needed route finding to suss out the best snow and avoid going too far left and falling off the cliff above the Salmon Glacier. It was interesting to feel the dramatic difference on the South side of the West Ridge v, the North aspect. More proof that aspect matters when timing the corn cycle. We had hoped to find a sneaker route onto the Salmon glacier that would have drastically reduced the amount of walking at the end of the day but were unsuccessful. The skiing on either side of the ridge was smooth and confidence inspiring. The last couple thousand feet got increasingly dusty and rock riddled. We were able to find good skiing as we began the big traverse back in more familiar terrain. After taking off our skis to cross a couple exposed ridges, we ran out of snow and began the long walk back on the Round the Mountain Trail. Fortunately, that trail is quite buff and flat which made for easy travel under heavy packs.

We also found motivation to keep moving due to the incessant bug population. Their attacks were limited to when we stopped for water or a breather. So we elected to do very little of both. (I do recommend packing a water filter. This was a big day and having access to filtered water on the walk out was crucial. I packed the lightweight Sawyer Mini Filter.) That said, the snow and glacier-fed streams were incredibly refreshing under the hot summer sun. We did see another group in which one guy forgot trail shoes and a woman neglected to throw in some shorts for the walk out. By the time they made it to the parking lot, he was in socks and she was rocking nothing but underwear below the waist. I am guessing they’ll pack differently next time! Haha. In the end, we climbed close to 8,000’, traveled over 16 miles and were in the field for about 10 hours. This was the perfect ending to a most memorable ski mountaineering season. We were especially grateful for this late summer gift given the reports of high temperatures and drought conditions throughout much of North America and Europe. When it's good, you best go!