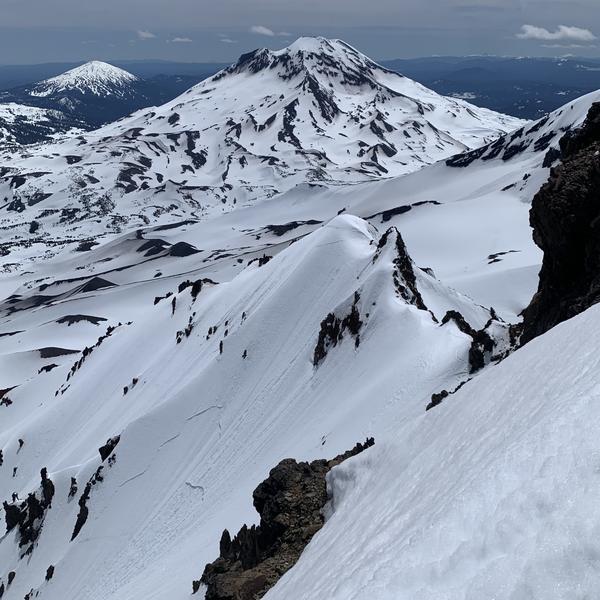 After our Type I fun adventure the day before, it was time for a good old fashioned sufferfest. We drove to the Pole Creek TH the night before at a snail's pace along the washboards to prevent rattling our bikes off the roof. Dawn came quickly as we rolled out of the car, quietly donning ski boots and munching on cold pizza; which is not the easiest food to get down at 5 am. We’d heard the snow started a mile from the TH so elected to wear ski boots instead of trail runners. This beta turned out to be full of lies! After 3 miles of navigating through some of the worst blowdown we’ve experienced we finally encountered enough snow to skin. Navigating blowdown with skis a-framed on our packs was challenging to say the least. We couldn’t go more than a few steps without having to change course, scrambling over and under logs, constantly losing the trail and having to double check progress on Gaia. I’m not sure if having ski boots on packs would’ve been easier with the additional width and weight, but I know my feet would’ve been happier! Once we hit snow 3 miles and 3 hours later, the skinning began and our pace greatly increased; my hips were relieved to not bear the weight of skis anymore as well. I always forget how long of an approach it is to reach Middle and North Sister. They crept ever closer as we slogged on. I’ve never been up there this early in the season and was surprised at how much snow there was! Places I’d stopped before to refill water from snowmelt were still buried but man was it pretty seeing the stark contrast between dark red rock and brilliant white snow. We hooked right under Prouty Point and traversed, hugging a rock band before zigzagging up the steep face; kick turns out in full force. Zan found a small, nearly flat spot under a boulder where we transitioned to bootpacking and continued ever upwards. Upon gaining the ridge dividing east and west, gusts of wind threatened to blow us off our feet and carry us down the elevation we worked so hard to earn. Eventually it came time to drop skis so we left them on a shelf near a rocky scree band. We didn’t get far before needing to transition yet again, exchanging poles for ice axes and crampons, before starting the seemingly endless traverse. The route alternated between short, steep gully climbs and high consequence traverses, with snow below us for some yards before dropping away, yawning into the abyss. After white knuckling the notorious 50+ degree Terrible Traverse we found ourselves at the base of the Bowling Alley, a steep gully full of water ice that crescendoed to a crux pitch of near vertical mixed ice and rock to gain the summit. Standing there staring up the gully, we debated the pros and cons of continuing.

The ice was too thin for ice screws, snow too shallow for pickets, and the exposed rock left no options for placing pro. We weighed our options and decided to free climb the final pitch without any pro and rappel from the summit back into the gully. A fall here would have been serious since the ice below would be incredibly difficult to self arrest on before reaching the cliff at the base of the gully. Spicy, to say the least! After discussing our comfortability, skill levels, and the risk involved we decided to continue; trusting that there would be something up there for a rappel to eliminate the need to downclimb that heinous pitch. It was icy, it was dicey, and the pucker factor was high. We finally made it to the summit, 8 hours and 45 minutes after we embarked on this journey. Long gone were our plans of linking North and Middle Sister. We were merely focused on descending safely, getting to our skis, and getting back to the car in one piece. We snapped a quick selfie and got to work finding a rock horn to sling webbing around to set up a rappel and gamely began the first pitch of the descent. I fought tangles in the rope during the rappel, cursing up a storm while at my wit’s end mentally, fear was taking over and I was more than ready to be done and off the mountain. Zan, ever calm and composed, kept me focused on the task at hand. Once we pulled and stowed the rope, it was time to do the awkward dance of traversing then downclimbing, over and over. The snow was sloppy and wet, causing our steps to plunge deeper and my heart rate to spike with each unexpected drop. Thankfully we made good time, retrieving poles shortly before getting back to our beloved, precious skis. After the umpteenth transition, it was time for the best part of the journey - the ski down! The first face was steep and really enjoyable, and we stayed high and to skier’s right to make it all the way out to the ridge without needing skins. I followed Zan’s track to maintain speed since the snow was quite slow and we had to straightline it most of the way to avoid losing momentum. Down we went, albeit slower than we would have liked. Once skiing in the cool shade of the forest, we found ourselves hopping over logs and veering around deep brooks full of icy cold snowmelt. Once we ran out of snow it was time to transition AGAIN. However, we decided to hang out for an hour by a babbling brook first. We had nowhere to be but back at the car that evening so there was no rush. Zan had at least a cup of water in his boot from snow falling in near the summit. So we took boots off, poured water out, then set liners, socks and feet in the sun to dry while resting, munching on snacks and rehydrating with electrolytes.

Eventually we threw everything back on, skis on packs weighing heavy on hip bones, boots clunky and awkward on the trail, legs tired from moving all day. We stumbled and grumbled through the endless blowdown. Always getting closer but feeling like we were in purgatory, destined to walk this walk for eternity. Scrambling over and under all the trees prevented us from establishing a rhythm - making every step a conscious, time-consuming effort. Finally, the blowdown lessened and we were able to pick up the pace, and alas! We caught glimpses of sunlight reflecting off the shiny glass and metal of cars in the parking lot. 15 long hours after starting out we made it back to the car. We couldn’t get those damn boots off fast enough! Our feet were aching and backs were sore from twisting and bending over with heavy awkward packs. Our skin was sunburnt and felt just plain crusty. 14.23 miles, 5,070’ vert, and miraculously no blisters. It was a wild ride and while I’m grateful for the experience and for getting back safely, I’m quite relieved to never have to do it again. Once is enough for North Sister!