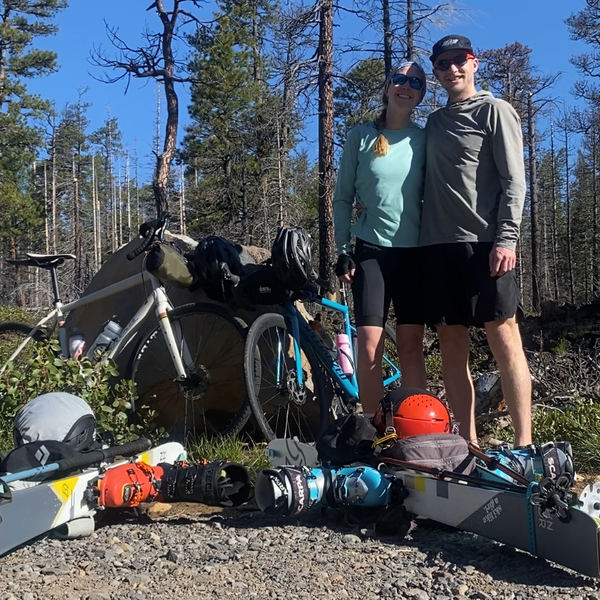 The day started at the buttcrack of dawn, driving down to Sisters on Tuesday May 24. We parked close to the gate at McKenzie Pass then embarked on a gear packing frenzy: grabbing skins, helmet, ski pants, bike shoes, sunscreen, gloves, all the things needed for a 2-sport adventure! After our bags were packed to the brim with skis and boots a-framed on our packs, we cautiously hopped on our bikes and began teetering uphill. All the weight immediately made itself known to our sit bones. It was a long, slow, and painful 3.5 mile bike ride to the Black Crater trailhead. Imagine my surprise when I glanced at my watch and realized it took us 35 minutes - I could’ve run that fast sans pack! We were grateful to hop off the bikes and relieve our sit bones. Quickly tossing soft shells over bike shorts, swapping bike jerseys for sun hoodies, bike shoes for ski boots, and ditching our bikes in the trees, we began skinning from the parking lot up through old, dirty snow and lots of fallen tree debris. We had to boot pack across random swaths of dirt before gaining the ridgeline and getting our eyes on the prize: a nice steep open face just begging to be skied. There was evidence of loose wet slides on east facing slopes but the north facing slope we wanted to ski was free of avalanche activity. Yet again, we switched to bootpacking as we had to scramble up and around the rocky ridgeline to get to the top of the face. It was a quick transition before we took turns skiing down to our meeting spot on a rise on the other side of the bowl. I skied down, hooting and hollering, enjoying the spring corn and smooth skiing before nearly going head over heels when the snow slowed to molasses unexpectedly at the bottom! Zan followed, looking like a ballerina on a stage of snow before almost biffing it when he too hit the slow snow at the base. We laughed, enjoying the moment and the sweat it took to get here while eating a snack before tossing skins back on and zigzagging our way out of the crater. Once we crested the ridge, we transitioned again and had an adventurous ski back to the trailhead, lifting skis over branches, hopping logs, sneaking around patches of dirt, and definitely removing all the wax we applied before the trip. It was a short tour, 3.9 miles, 2300’ vert, and 3.5 hours until we were reunited with our bicycles. If we had time, we would’ve done another lap of the crater but alas, the sun had already warmed up the snow.

We shed our ski gear, eagerly removing layers in favor of lycra and bike jerseys, this time stuffing skis and backpacks in the trees before hitting McKenzie Pass feeling as free and light as a bird carrying the bare minimum. Going uphill was still work but it was a much more pleasant experience and we were all smiles. Seeing the snow banks towering high above us near the summit was a real treat. There’s something special about riding bikes next to a 20’ snow wall in 60 degree weather! After stopping to admire the views and take a few pictures we continued on to the summit around the next bend. We were blessed with clear skies, no wind, and pleasant temperatures at the Dee Wright Observatory. A few other cyclists were enjoying the views as well, but I didn’t see anyone else crazy enough to lug ski gear with them. We wanted to continue on since it was still so early in the day, but only descended half a mile before snow abruptly covered the road where the plows had stopped clearing snow. After the short climb back to the Observatory, the descent back to our skis began. There was a bit of rock and debris on the road so we erred on the side of caution and went at a respectable pace to avoid a gnarly wipeout, eager to put forth minimal effort for maximum fun.

The trailhead was upon us before we knew it, and we dipped up to the parking lot to grab backpacks, groaning as we wobbled under the weight and carefully began cycling again. The wind was picking up, turning our heavy ski-laden packs into sails which made biking extra dicey, but it didn’t take long to descend the remaining miles. Once back at the car, we dried out skins and packed up, surprised that our adventure had ended and it was before 3pm! The bike ride was 11 miles, 750’ vert, and over in less than an hour. I was stoked to have a 6 hour, nothing-but-type-1-fun-adventure! At no point was it not fun and there was no suffering, atypical of our usual adventures. But we saved that for the next day, when we climbed North Sister which is a tale for a different day…