The Marsupials Traverse has the distinction of being the longest multi-pitch route at Smith Rock. Depending on how you break up the climb and which variations you decide to do, you wind up with 7 to 10 pitches of sport and mixed climbing spanning the ridgeline between five distinguishable features in the Marsupials: the Mudpile, Mini Half Dome, Brogan Spire, the Tail, and, finally, the Opossum. Situated off Burma Road, high above and east of the main park area, the Marsupials Traverse offers a break from the crowds and feels more akin to a remote day in the alpine. 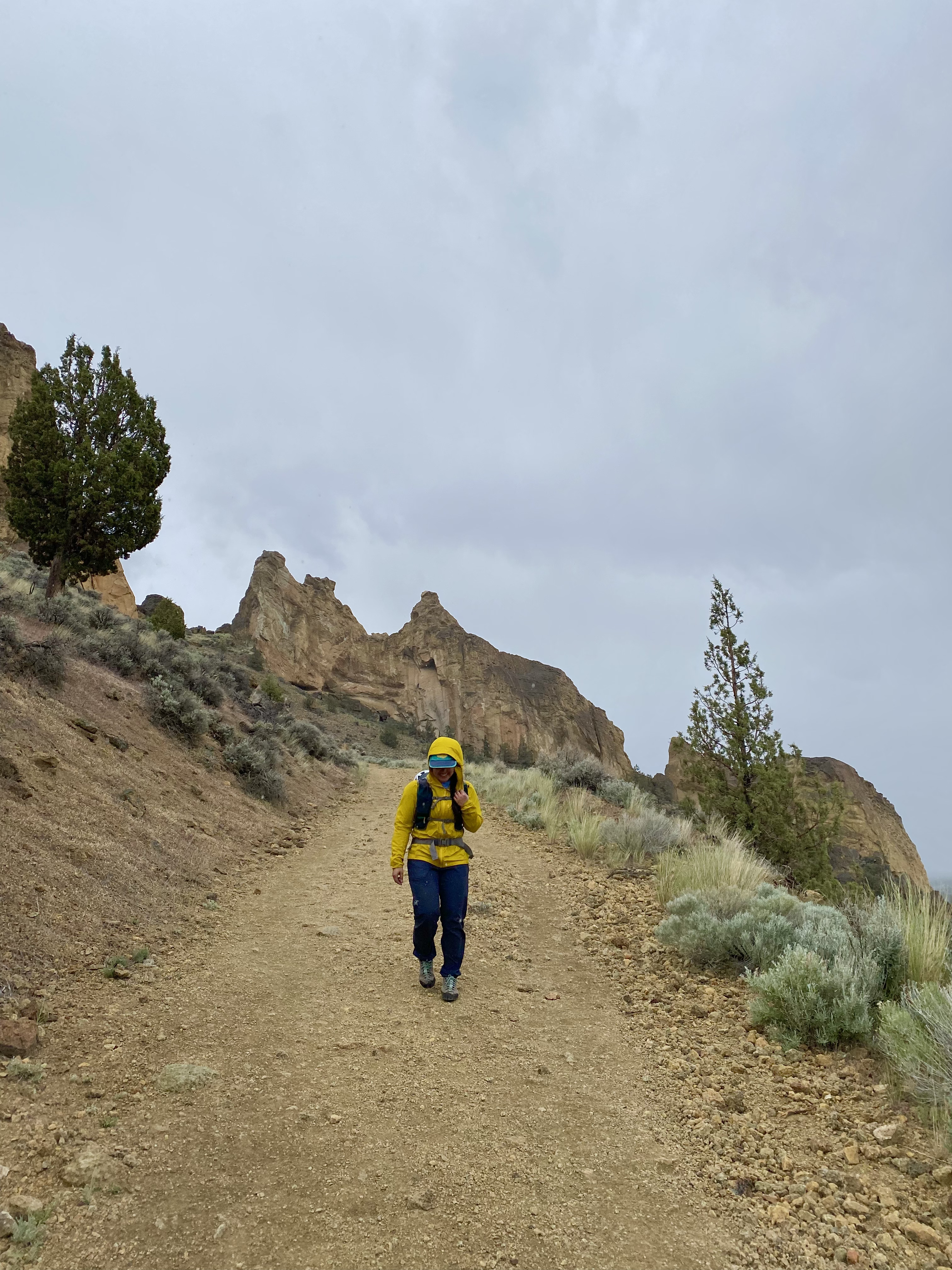 The rock formations in the background make up the Marsupials Traverse.

With alpine rock season right around the corner, the Marsupials Traverse seemed like a great opportunity for Mack and me to hop on a low key, low stress multi-pitch route and dial in our communication and belay transitions in preparation for objectives later this summer. The forecast on the day of our climb only called for a relatively brief window of dry weather in the morning through early afternoon, so we left Portland early, arrived at Smith a little after 7 am, and reached the base of the Mudpile around 8 am.


Alan Watts’ guidebook lists the traverse as a 5.10b route because the first two pitches described are Edge of the World (5.10b). However, any route that reaches the top of the Mudpile can be substituted. We opted for something easier and started on Carla the Stripper (5.8), climbing this route to the top in a single pitch (although there are mid-pitch anchors which help to minimize rope drag). This route, though generously bolted, ended up being the most heady and delicate climbing of the entire traverse (at least for me, having not sport climbed at all in several months). My nerves calmed once I topped out and the remaining 7 or so pitches felt like a cakewalk!

Mack climbing the final few moves of Carla the Stripper.


From the top of the Mudpile, we moved our belay northeast to a set of anchors above a third (maybe fourth) class downclimb. The following pitch to the summit of Mini Half Dome had some of the most alpine-esque terrain of the entire route (much of it reminiscent of the West Ridge of Forbidden Peak in the North Cascades), including the slabby downclimb from the anchors, a narrow ridge traverse, a spicy 5.7 boulder move, and an airy, delicate downclimb and step-across move over a small chasm to reach the final scramble up to Mini Half Dome.

Theresa traversing the ridge between the Mudpile and Mini Half Dome. 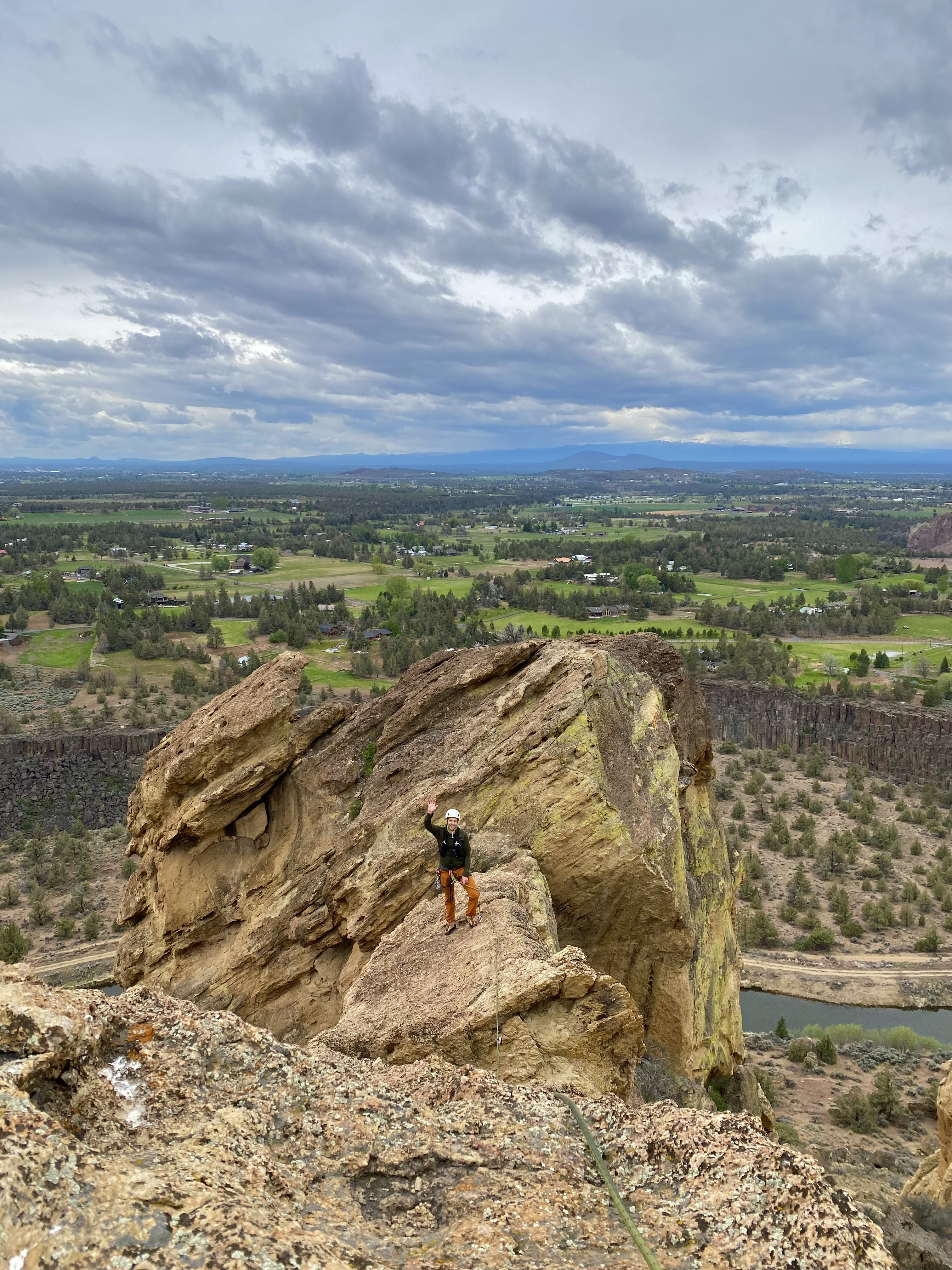 Mack starting the traverse to Mini Half Dome; the step-across/chasm part of the pitch can be seen in the foreground.


The next formation to tackle on the traverse was Brogan Spire. From the summit of Mini Half Dome, we rappelled to the ground, then scrambled up through a short chimney to reach the base of the West Face (5.5 X in Watts’ guidebook). Although the pro was poor and the rock quality mediocre, the climb up the first two pitches was mostly a scramble with ample holds and great stances to stop and take in the view. This section could be done in two pitches, but I decided to take advantage of some bolted anchors prior to the huge, flat-ish shelf below the spire formation to minimize rope drag. Mack did some third class scrambling above the anchors to reach the shelf then used a simple body belay to bring me up. I led the final pitch up the pinnacle, placing a couple of cams in less-than-ideal spots to help with rope drag before mantling onto the summit. These cam placements (in addition to one other placement to protect the step-across move on Mini Half Dome) were the only times I placed any trad gear on the entire traverse. 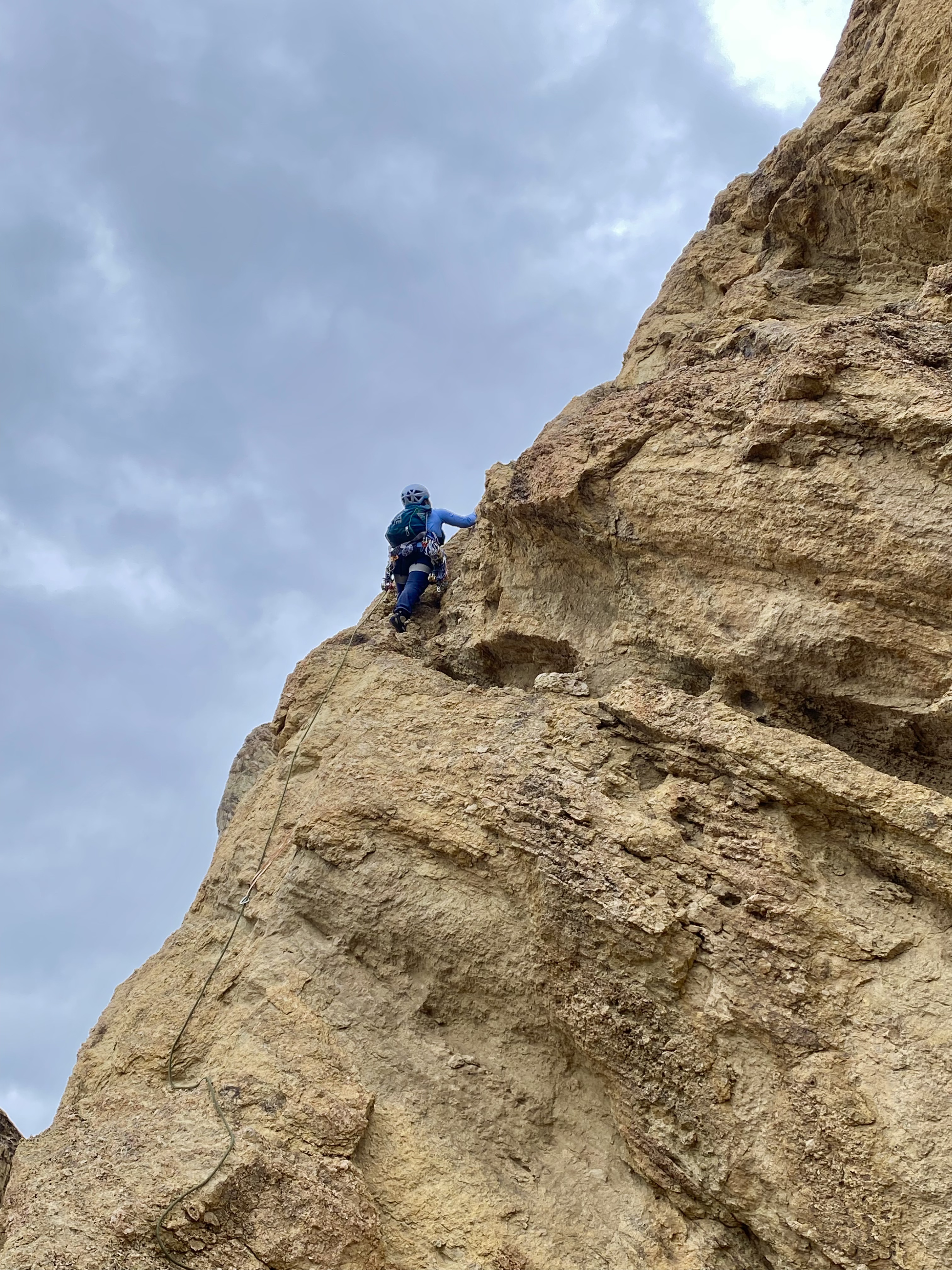 Theresa heading up the first pitch on Brogan Spire. 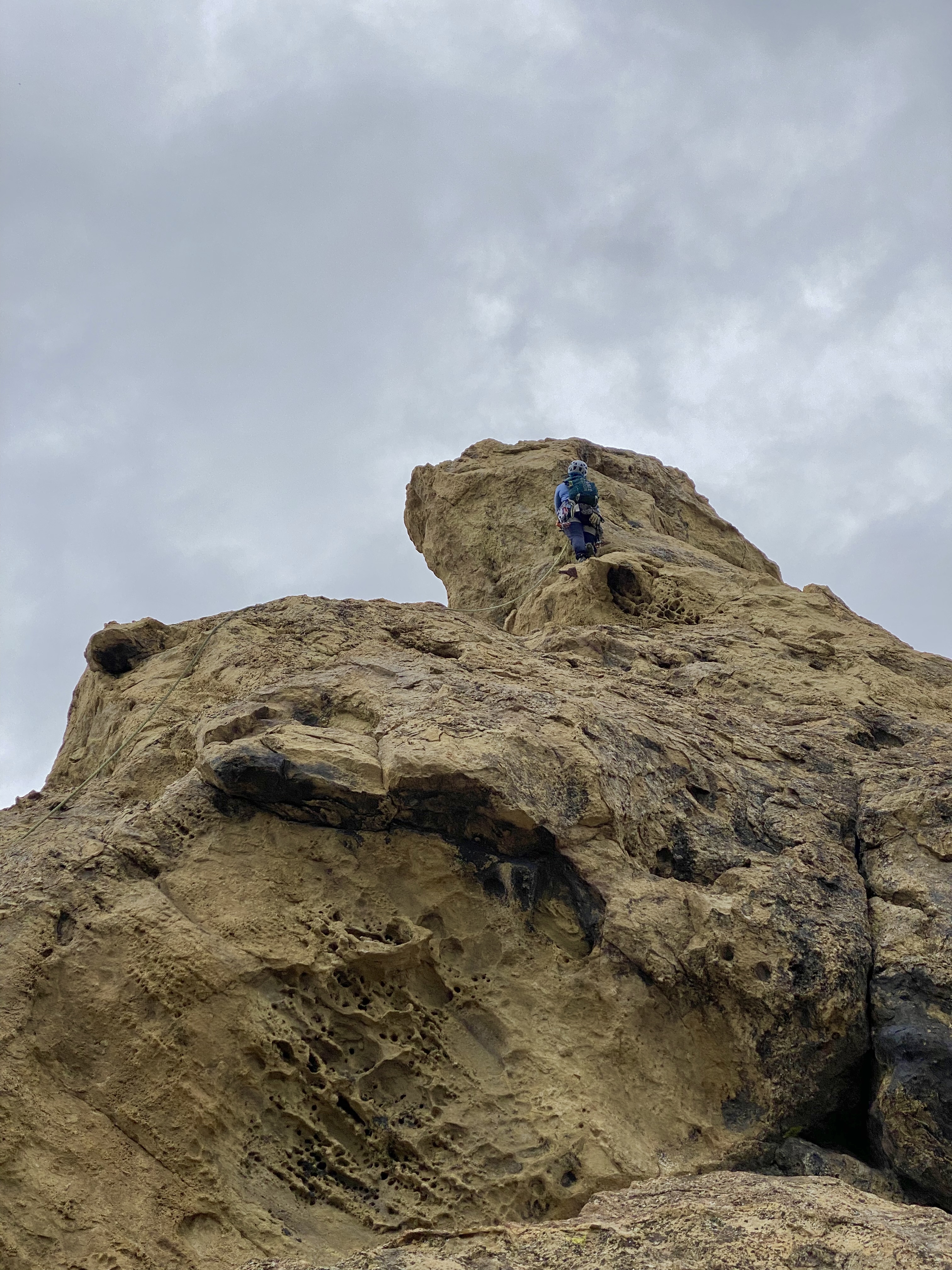 Theresa assessing the final moves on the pinnacle.


We rappelled down to the notch between Brogan Spire and the Tail. By this point it was maybe 11:00 am. Dark clouds were moving overhead, wind picked up, and it started to drizzle slightly. Our original plan had been to make two more rappels to the anchors for Living Blindly (5.7) and enjoy two well bolted sport pitches to the summit of the Opossum, but given that weather was starting to deteriorate, we decided to finish on the North Face Traverse (5.3 R), bypassing the Tail summit, and finishing on the final three bolts of Blind Opossum (5.7), all in a single pitch with heinous rope drag. From the summit, we stayed tied in and did one more “pitch” across an exposed, downclimb traverse to reach the backside rap station. The light drizzle turned to rain and strong gusts just as we started to set up our final rappel. Perfect timing! 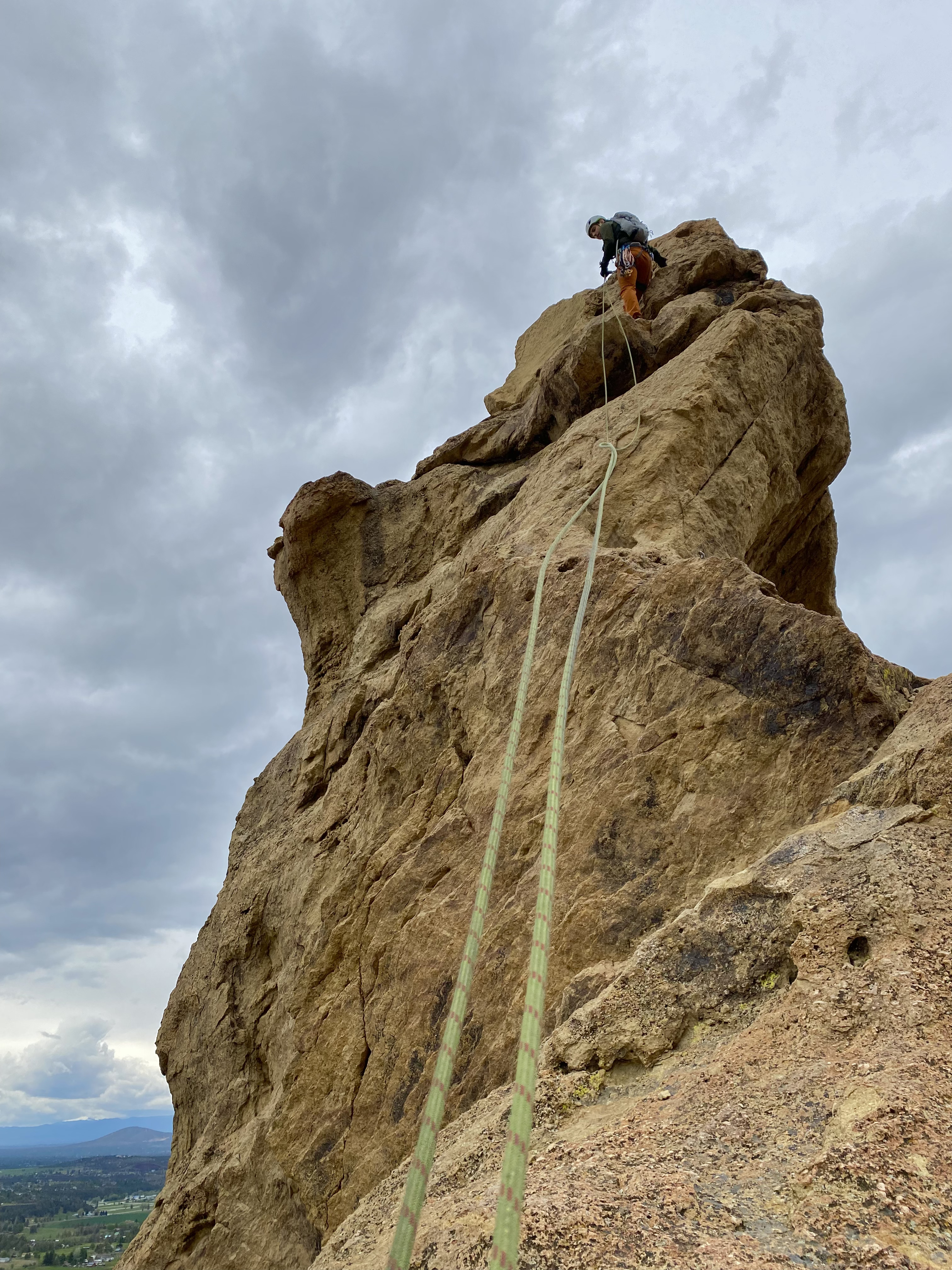 Mack rappelling from the summit of Brogan Spire. 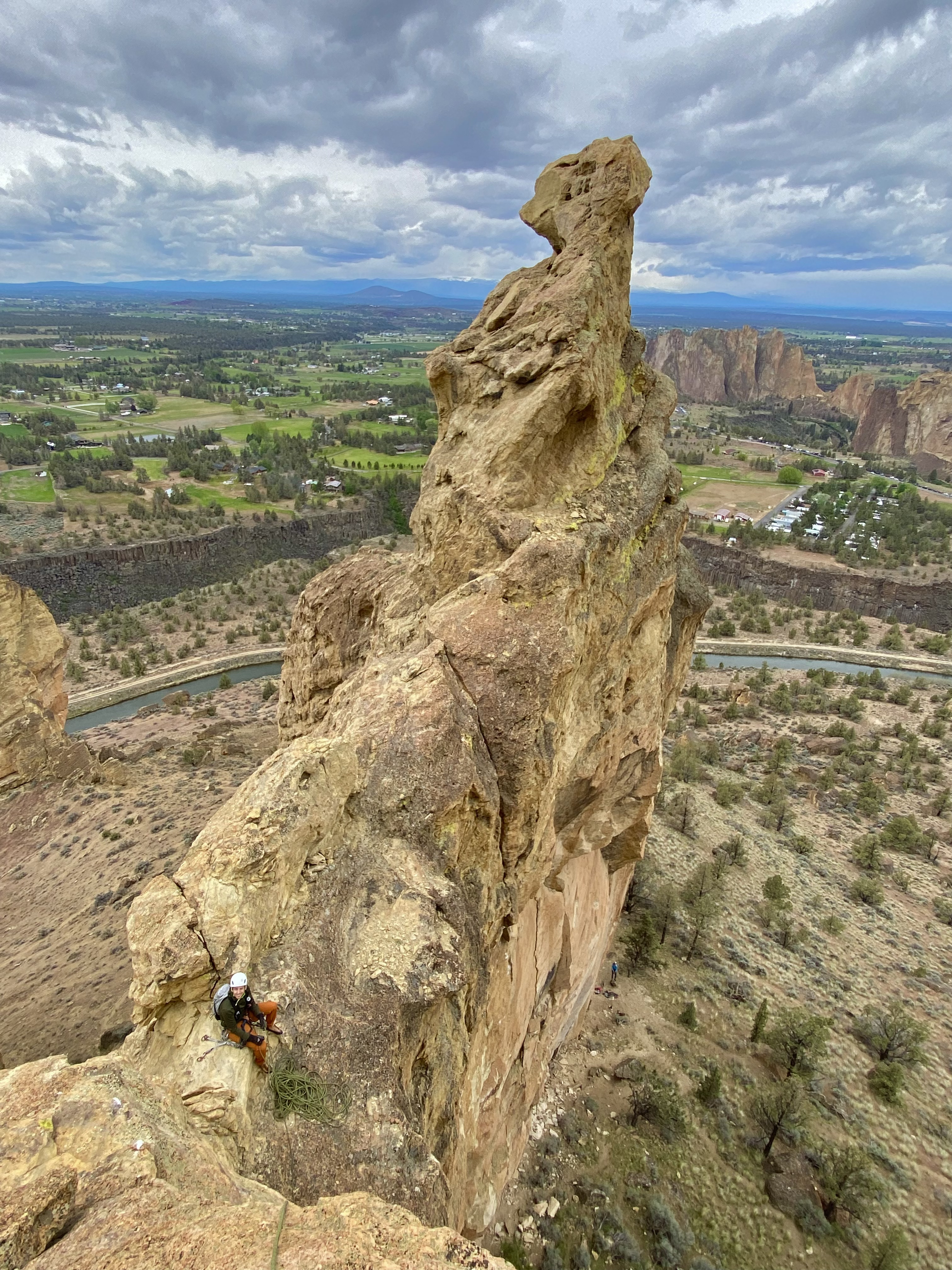 Mack belaying from the notch between Brogan Spire and the Tail. 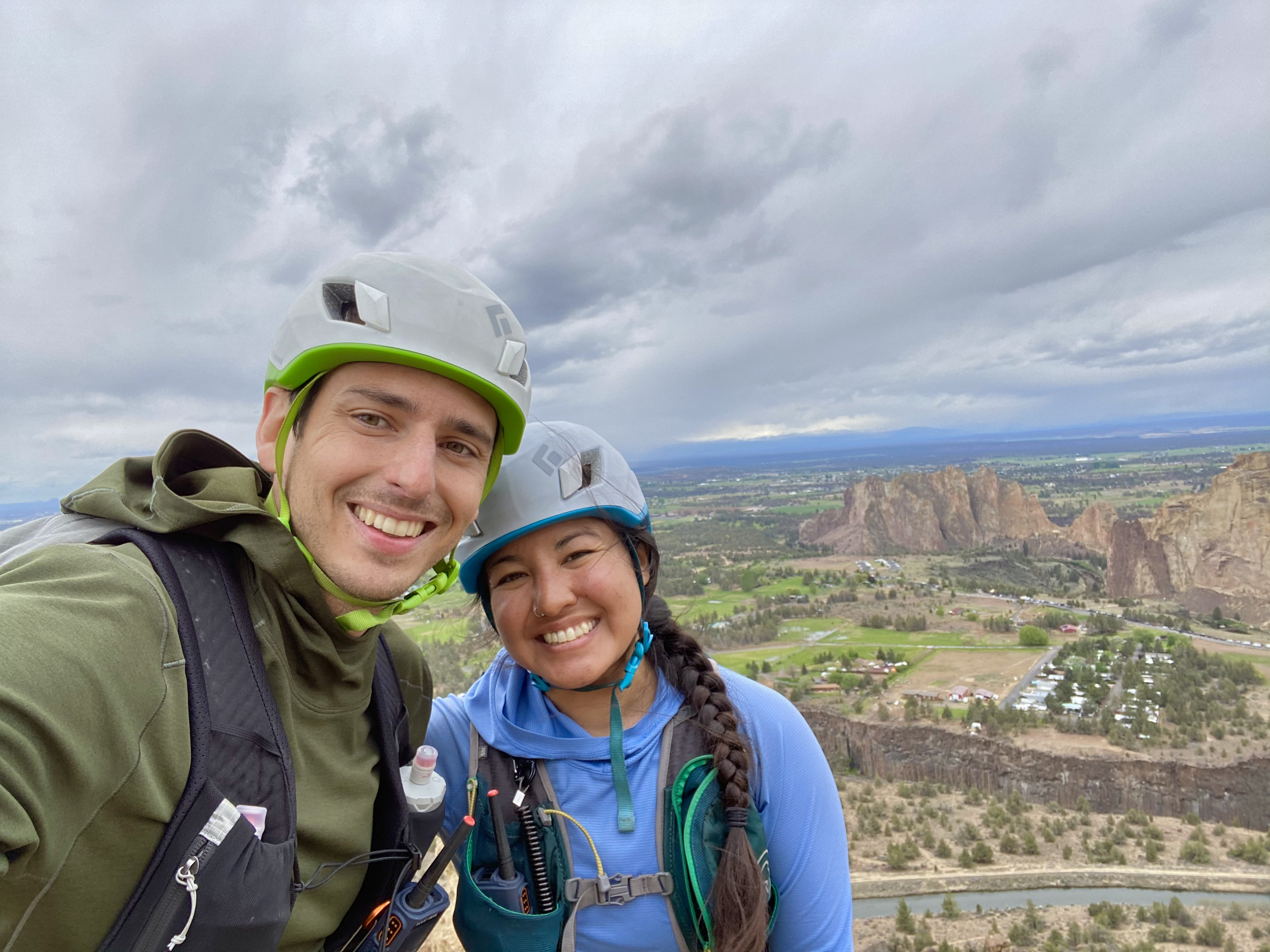 Summit selfie on the Opossum. 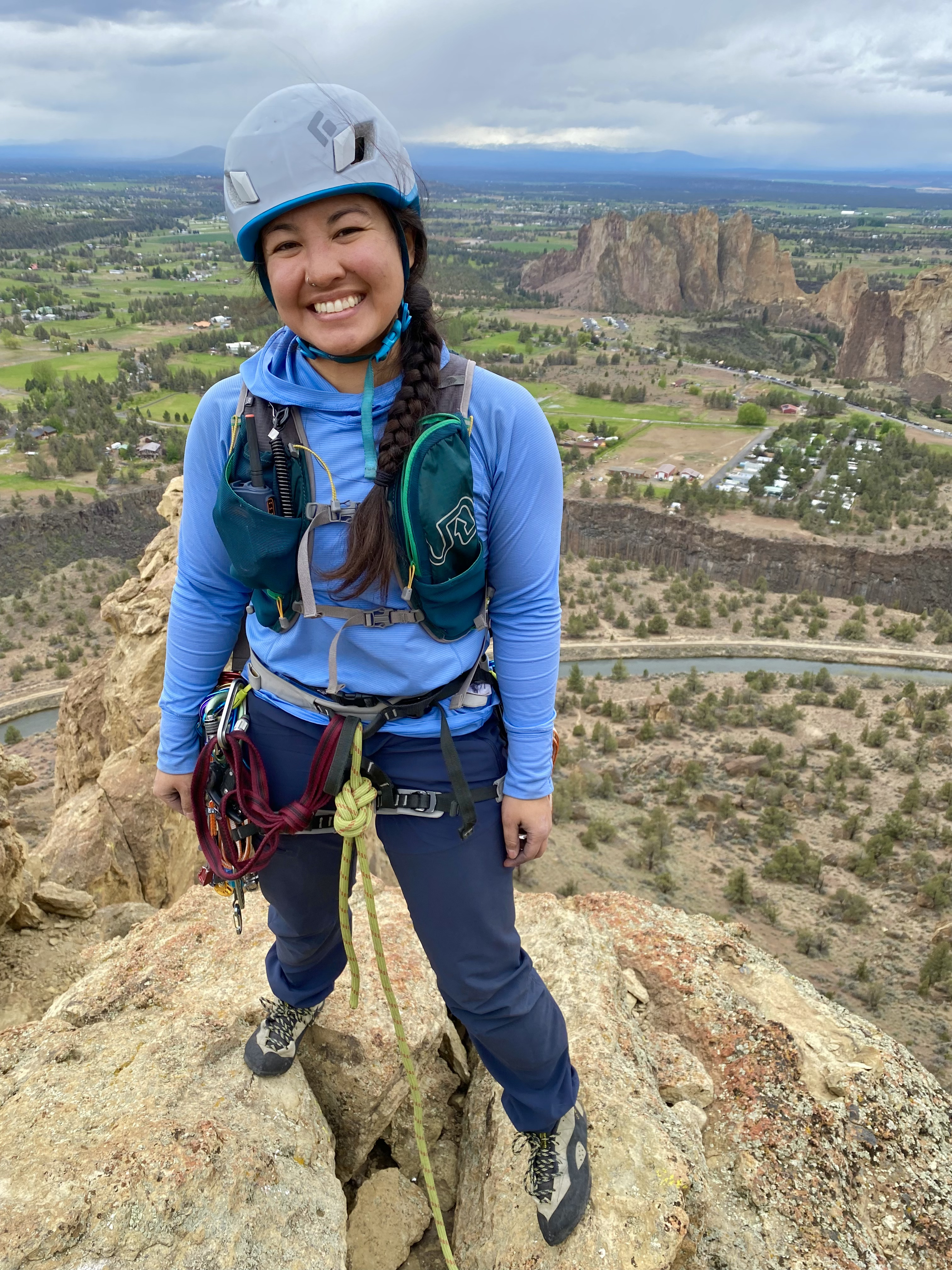 Theresa on the summit of Opossum. 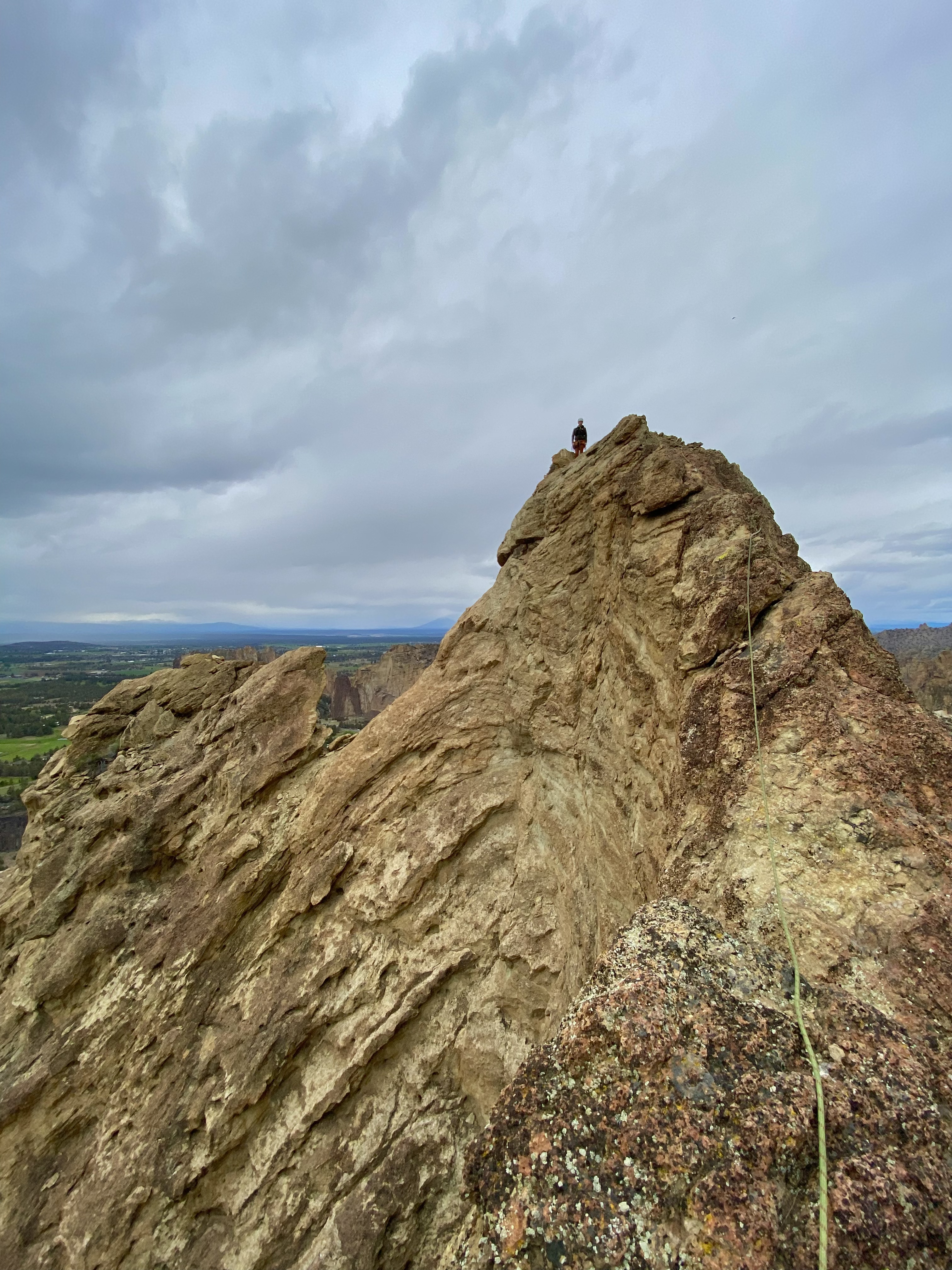 The exposed traverse to the rappel station on Opossum.


We casually packed up our gear and took a much deserved snack break at the base of the north side of the Opossum, sheltered from the wind and rain, then hiked out of the Marsupials, passing only one other group in the area. It was so nice having the entire traverse to ourselves that morning! All in all, despite our shortened trip due to the weather forecast–I’d hoped to also climb Birds in a Rut and/or Round River that same day–it was a fantastic, type-one fun day on a Smith Rock classic, as well as a great training day for bigger alpine routes. 10/10 would climb this again in a heartbeat.

Follow more of Mountain Shop Ambassador Theresa Silveyra's adventures on Instagram
Sign up for take a course with Theresa through Climbers of Color
This route was climbed on 5/28/22. Conditions change daily so make sure to consult a variety of sources when planning your trip!