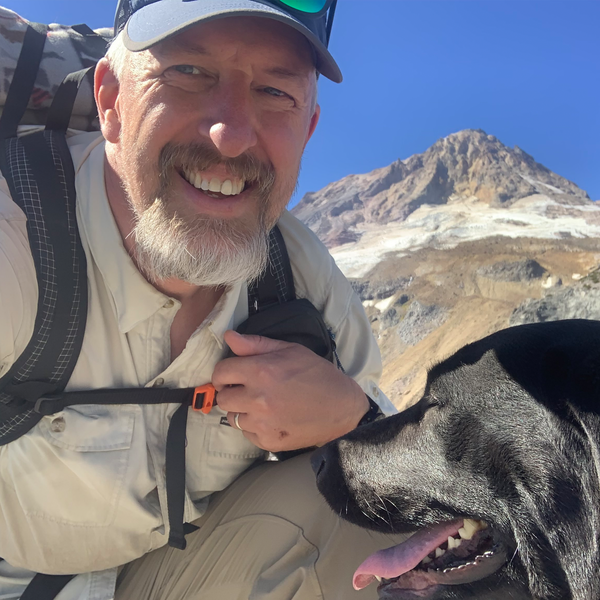 Despite living in Oregon for 25 years, and backpacking extensively in the region, I have never done the Timberline Trail in one go. Instead of letting another year go by, I decided September 2021 was going to be the time to do it. I have backpacked several sections as parts of other trips over the years, and as a member of Clackamas County Search and Rescue, I have a lot of experience on the west side of the Timberline Trail.

While friends and coworkers have done the trail in one or two days, I decided to do it in three days. For most of the people I talked to on the trail, four days was most common. Looking at a map, and dividing about 40 miles into three days, I decided to park at Cloud Cap and hike counter clockwise. A majority of the hikers I talked to started at Timberline Lodge and went clockwise. By starting at Cloud Cap, I was able to have night one at Ramona Falls and night two at White River. 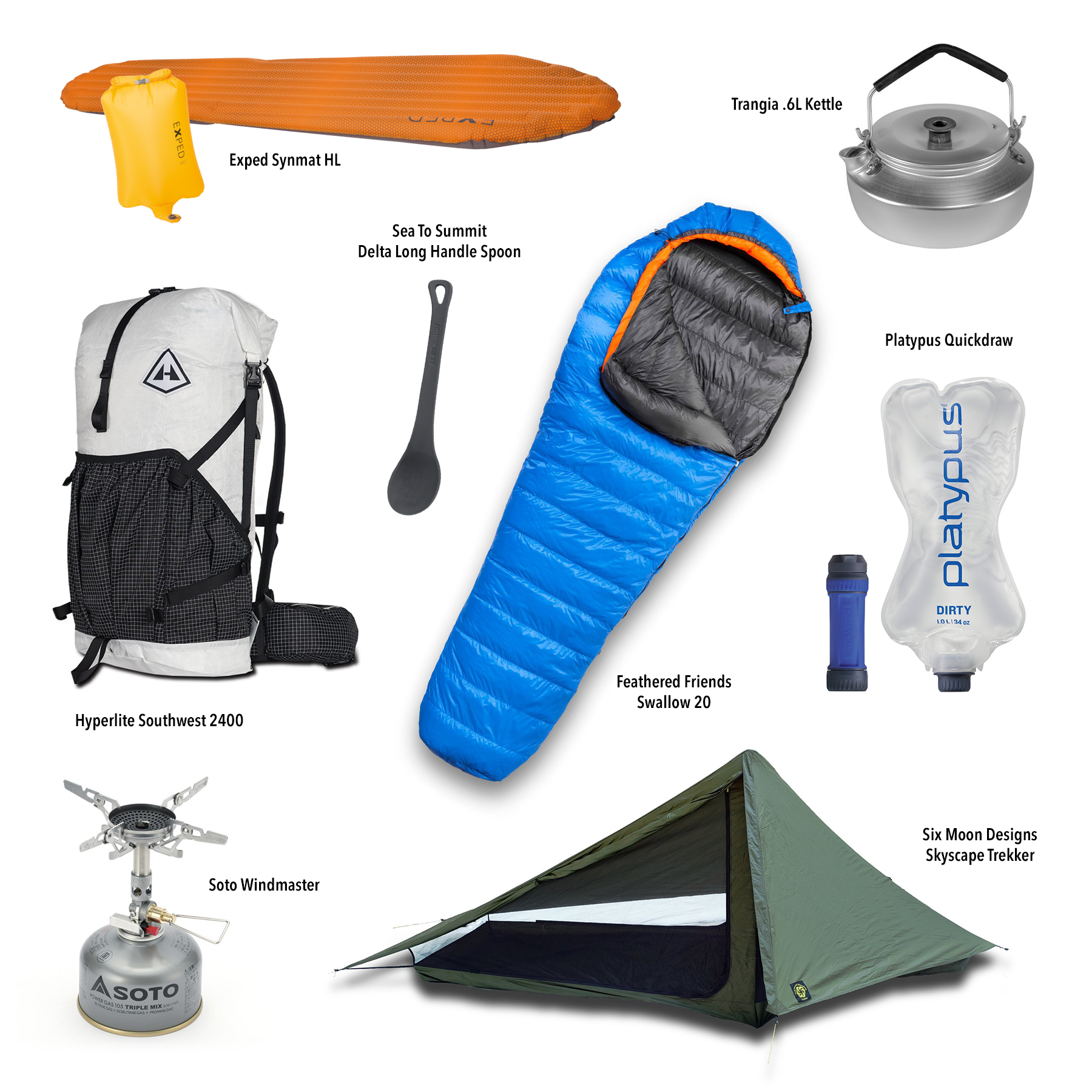 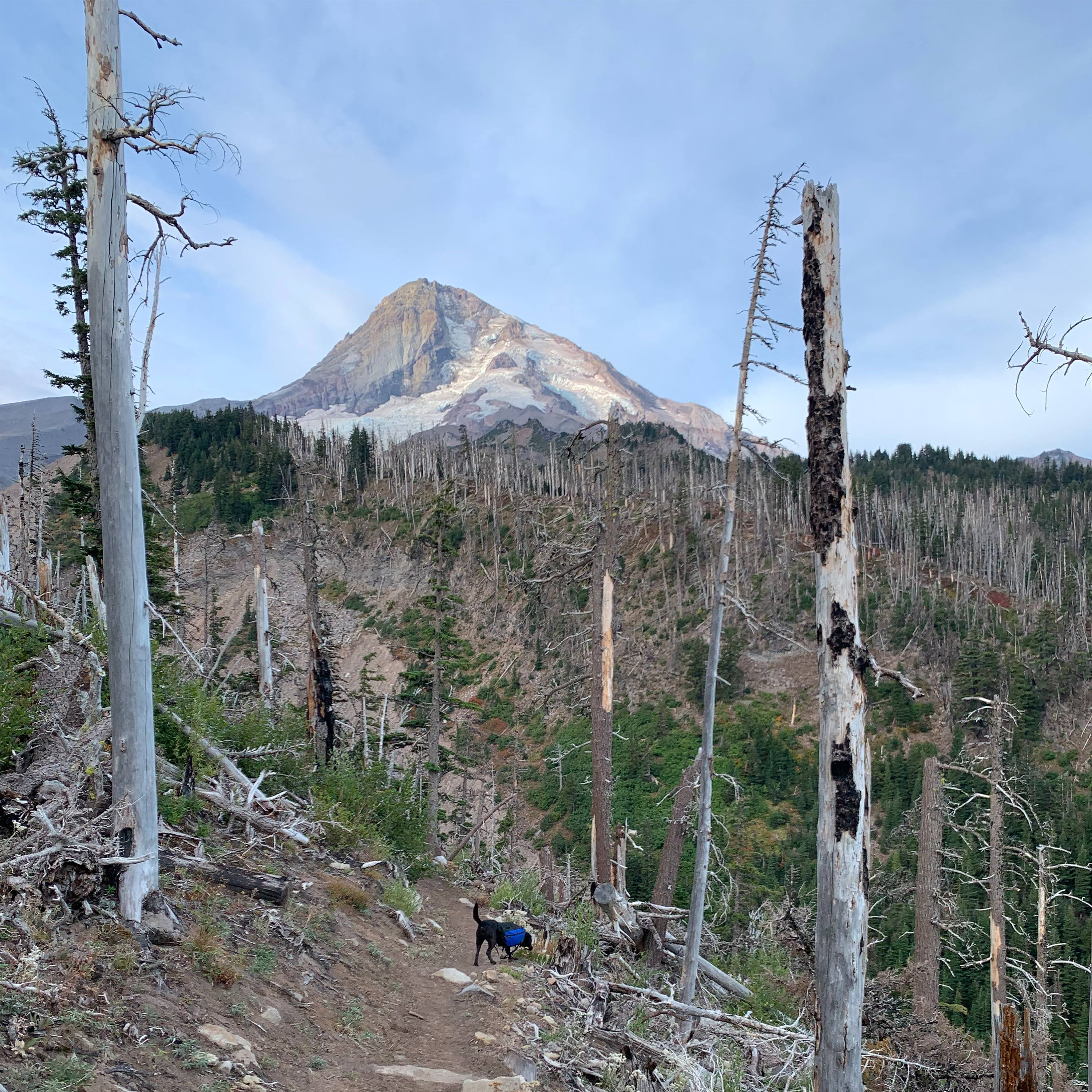 I spent the night at Cloud Cap, and was able to hit the trail at 8am with my K9 companion and official Mountain Shop shop dog Jacqui. The Eliot was our first river crossing. At 8:30am, I was able to rock hop across without any difficulty. In fact, I should point out that I never got my feet wet on any river crossing. I wore the Hoka Speedgoat Mid GTX which ended up being perfect, though I knew if water went over the tops, I'd have wet feet all day long.

The first several miles takes you through areas burned by the Bluegrass fire of 2006, the Gnarl Ridge fire of 2008 and the Dollar Lake fire of 2011, so you get to see some regrowth and a lot of sun. There were also still huckleberries along this section. This section has the least amount of elevation change as the trail winds through Elk Cove, Wyeast Basin and Carin Basin toward Bald Mountain. There are numerous clear flowing creeks to get water from. 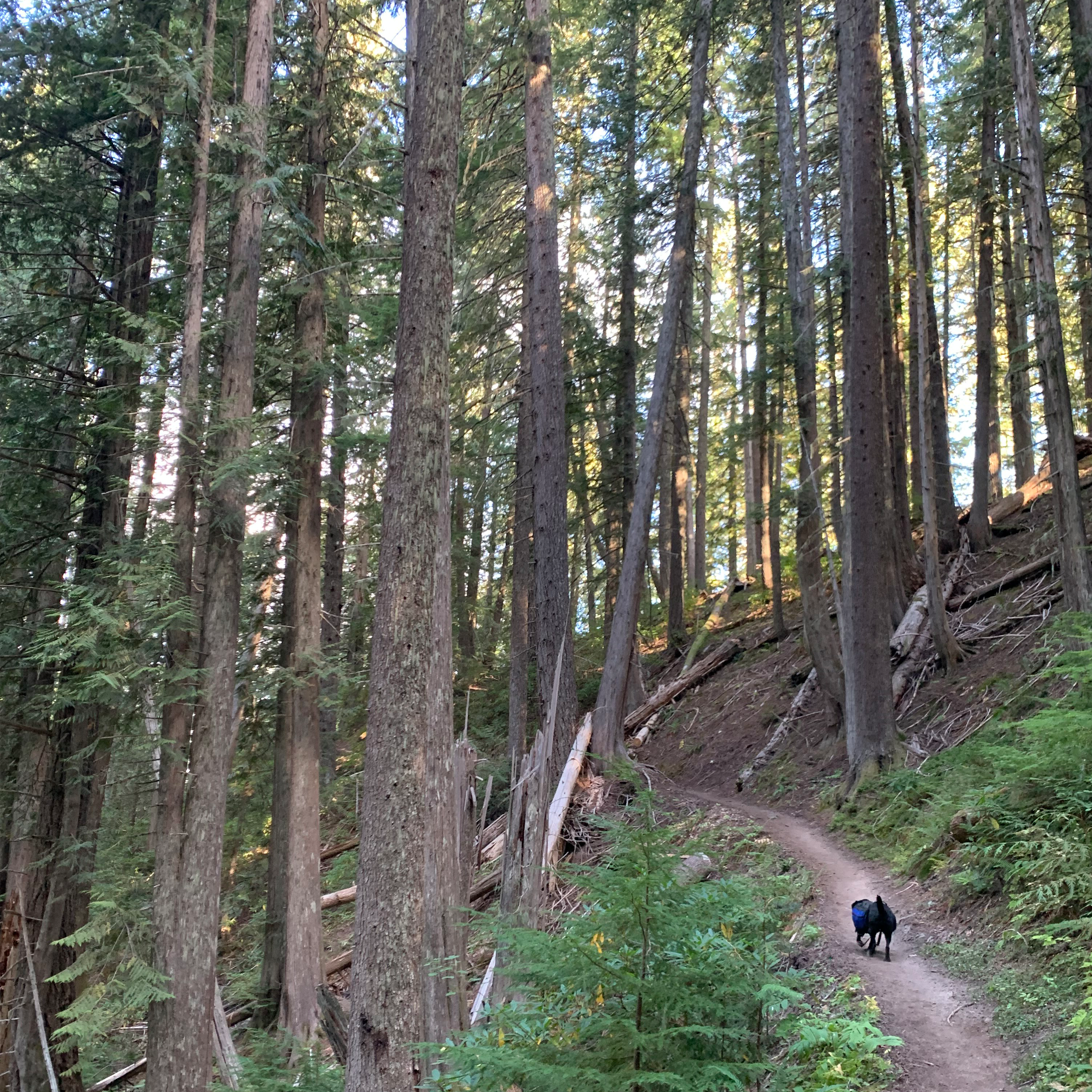 At the junction of the PCT, we hit the first reroute. The trail below Yokum Ridge was devastated by blow down from the wind event on Labor Day 2020. This is where my search and rescue group had several missions to rescue hikers early in the season. It will probably be years until this part of the Timberline Trail is passable again. Luckily the reroute is pretty easy, though not as scenic, and slightly shorter. 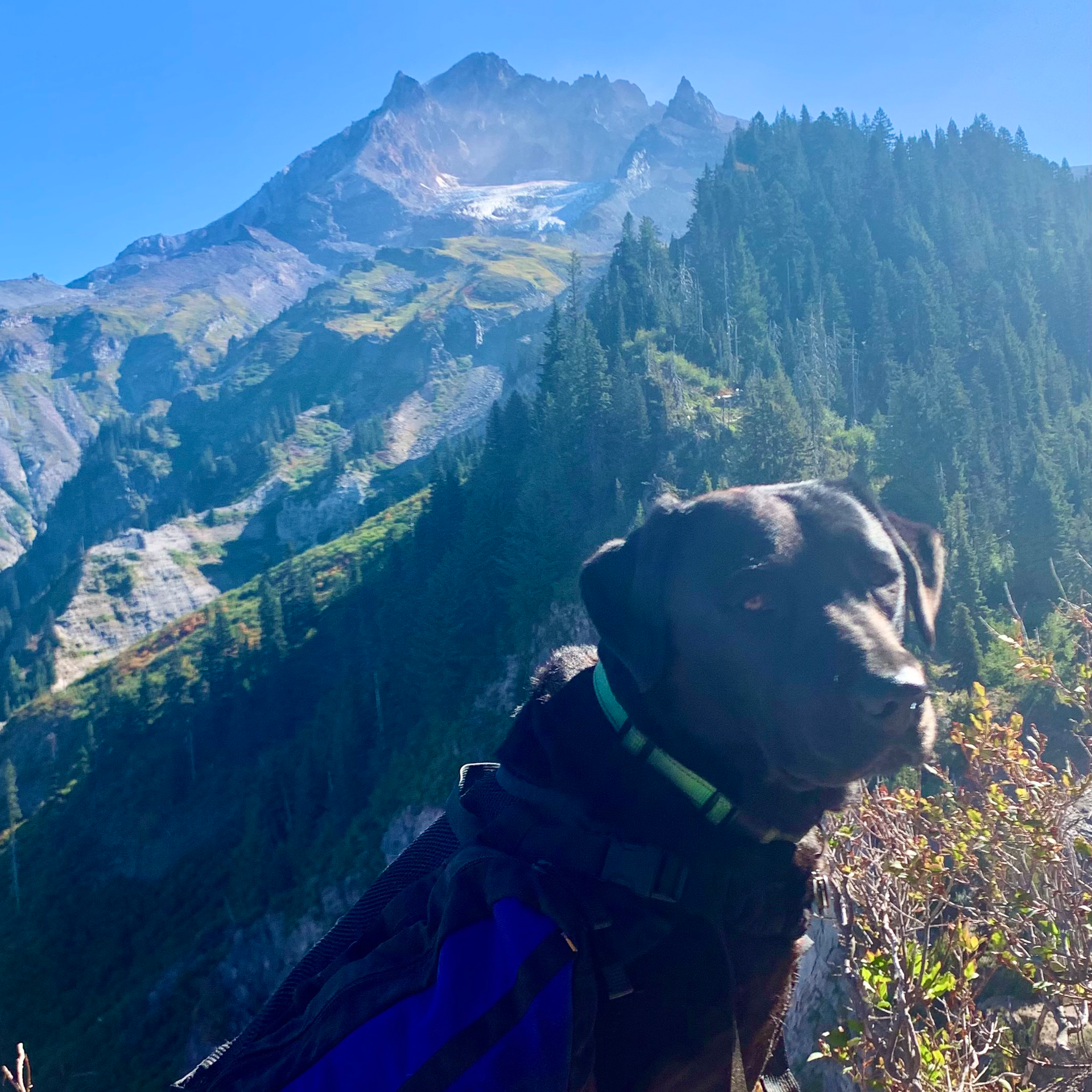 The reroute takes you down the PCT, 2.2 miles and 1500 feet of elevation loss to the Muddy Fork. There is a huge log to cross the river, and understandably, the river is pretty muddy. Expect to see a lot of day hikers as you make your way to Ramona Falls. The water under the bridge at Ramona provides clean water for filtering. There are many spots here to set up a tent, though it can also be quite busy depending on the day. 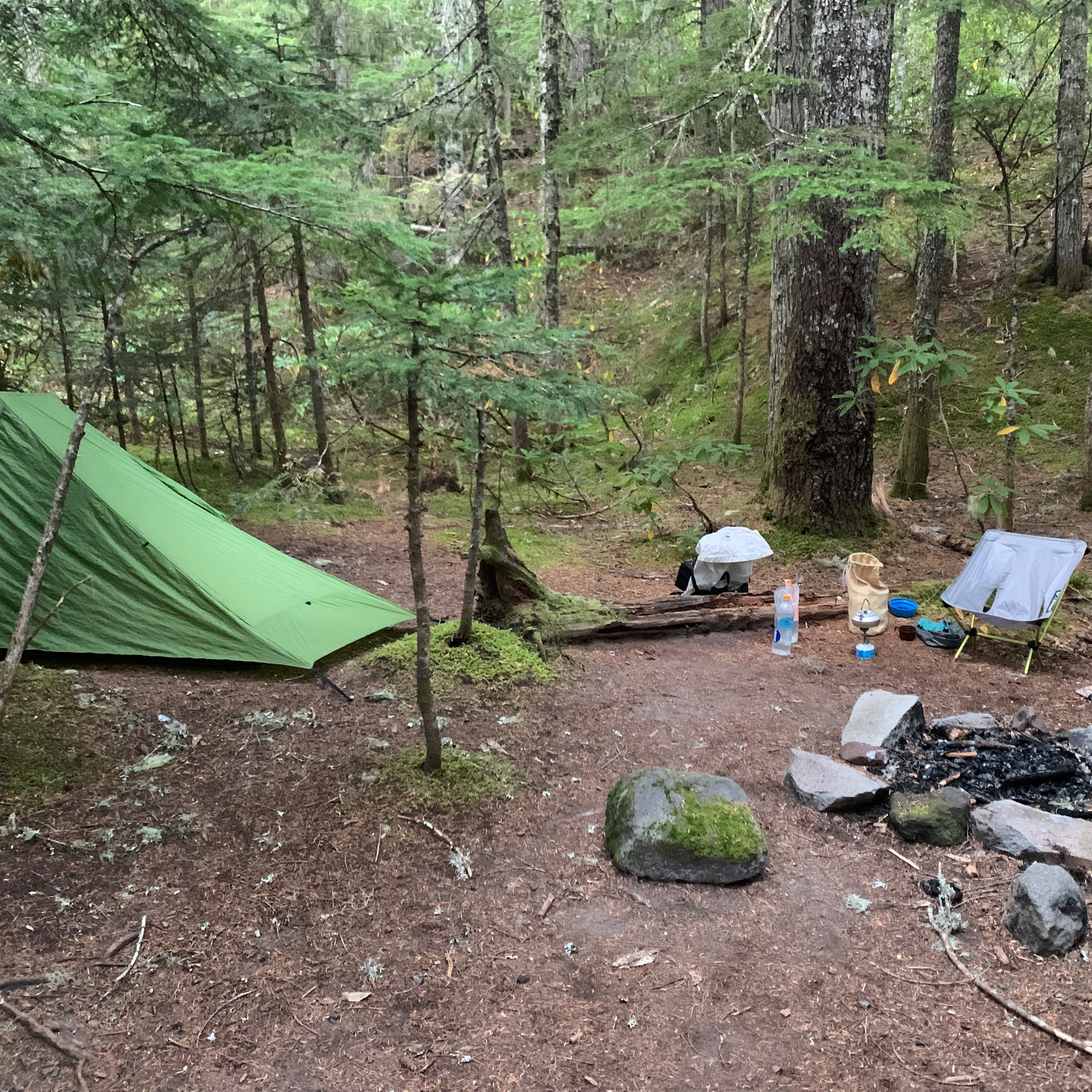 Most of this day's hike is part of the PCT, so depending on the time of year, you may share the trail with some through hikers.This day was a lot of uphill hiking. Almost 3000 feet of it! Crossing the Sandy was easy, though finding the best place to cross may take looking around. You can always try following the cairns to see if they lead to an easy crossing.

The trail starts back up in a notch between two ridges on the south side.There are several good looking camp spots along the clear flowing creek here. As you start climbing, you pass through a beautiful stand of cedar trees that look straight out of Endor from Return of the Jedi. Occasional views of the Sandy River drainage to the north and Mt Jefferson to the south makes the climb seem to go by quickly, though it's still quite an effort.
The climb down and out of Zig Zag canyon is beautiful, though you may be disappointed you lost some hard earned elevation.

Eventually you'll hit junctions for the Paradise Park loops, and see more day hikers. If you want to add to your trip, these loops can be worth the effort.
As  the hike gets closer to Timberline Lodge, you'll get above tree line, so bring out the sunscreen. I took a slight divergence at the lodge to refill my water carriers with tap water.
Now the trail heads back downhill to White River. I hoped to camp in the trees on Boy Scout Ridge, but couldn't find anything, so I ended up camping on the sand in White River drainage. 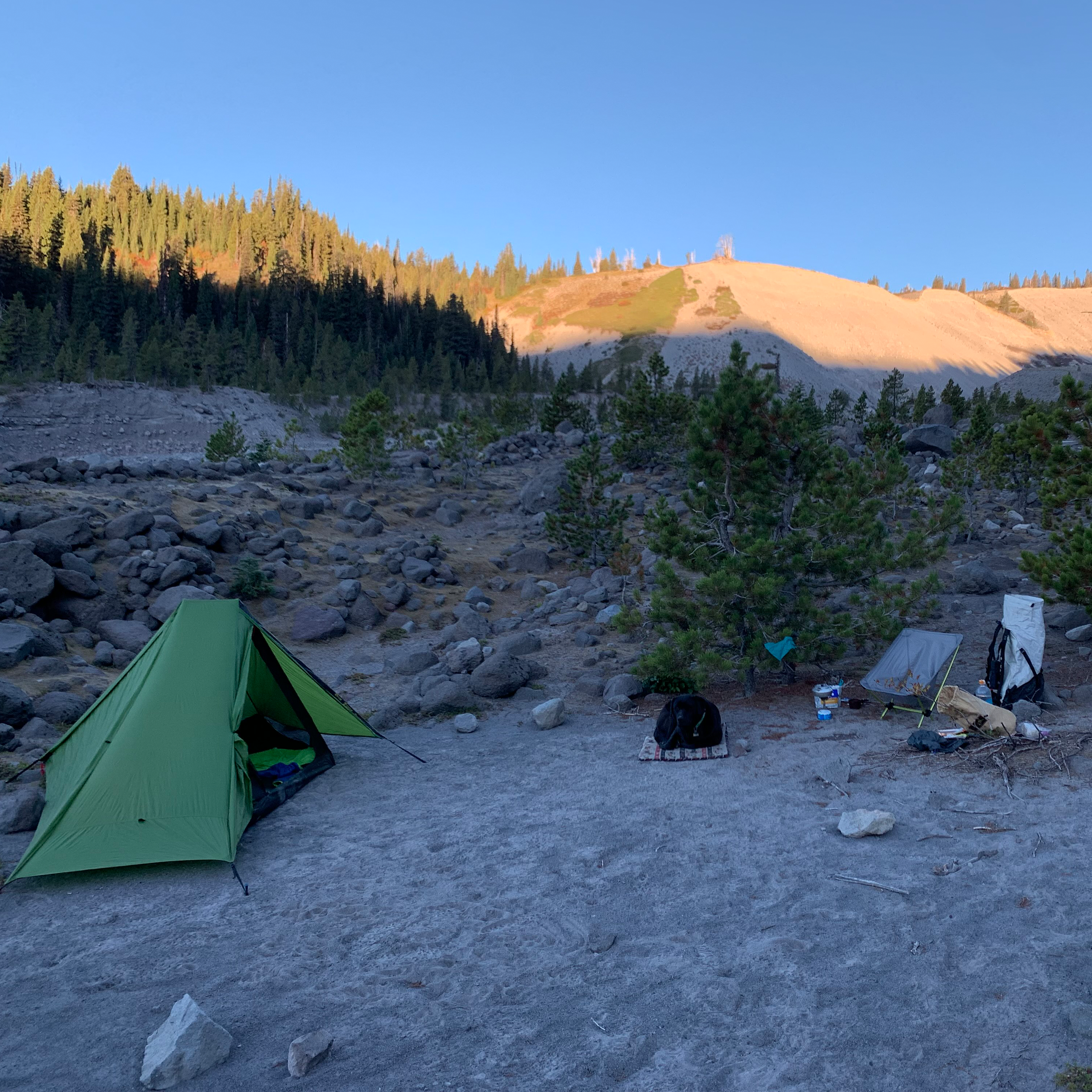 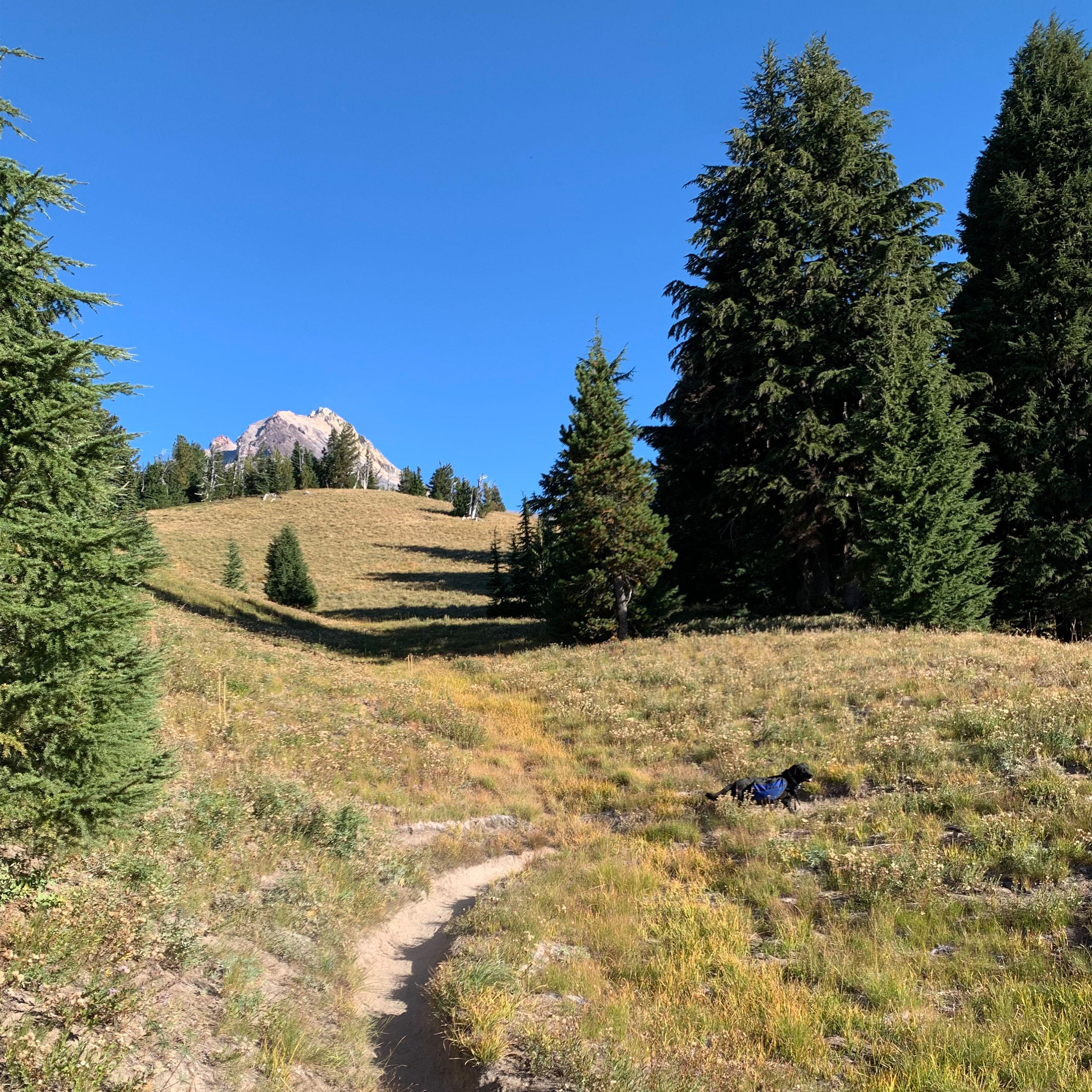 Climbing out of White River Canyon is the steepest part of the whole trail, and a prelude to the climbing to come. After a couple miles, you enter the Mt Hood Meadows Ski Area. Having skied this area many times, it was cool to see it in summer. I could also see why it's named after the meadows that are in this part of the trail. There are numerous camping spots and several clear flowing streams. 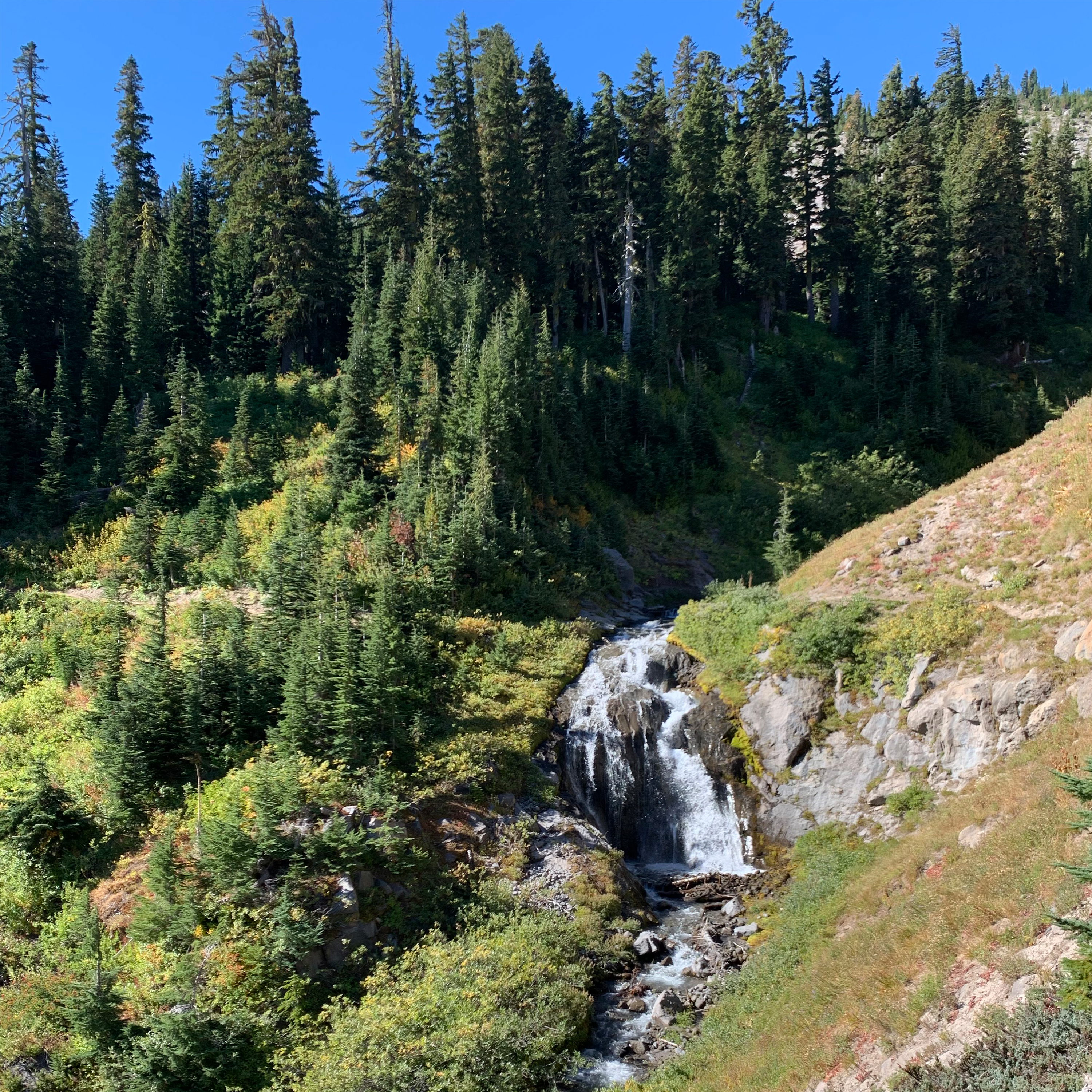 After dropping into Heather Canyon, there are some cool waterfalls and the crossing at Clark Creek was pretty easy. Then you hike over the next ridge on your way to Newton Creek.

On the south side of Newton Creek is a clear flowing stream with several good looking camp spots. Fill up with water here, because after Newton Creek, there was almost no water until Cloud Cap. Newton Creek turned out to be the hardest river crossing of my trip. Maybe because I hit it at 11:30am. Crossing from the south side can be a challenge, since there are many large boulders that were difficult for Jacqui, and made it hard to see the creek for a good crossing. But, I got some tips from another hiker that there was a log a couple hundred feet up river. I followed the cairns and was able to find it. It would be easier to find it from the north, and I passed on the info to the other hikers I saw headed that way. 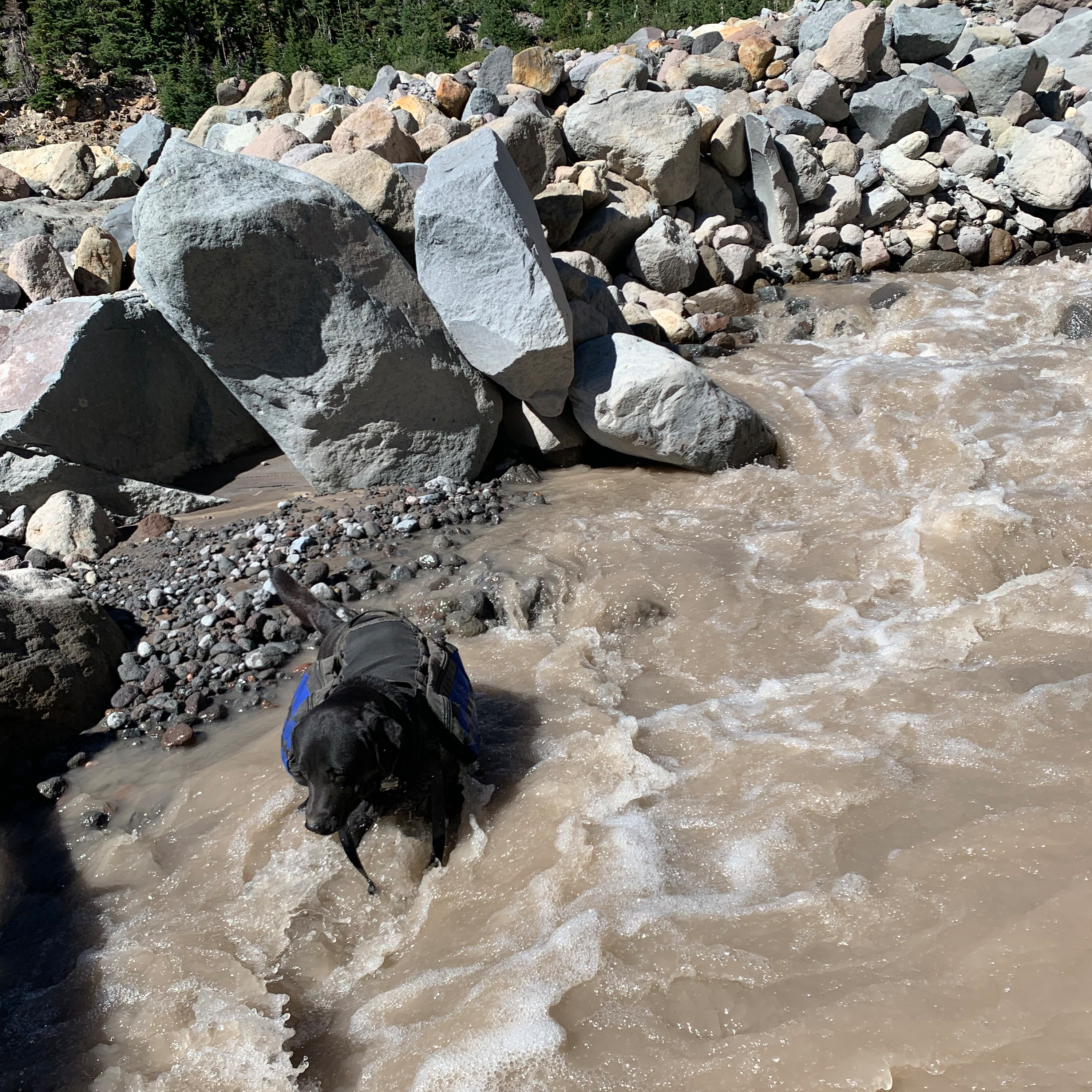 Newton Creek is just above 5000 feet, and from there the trail goes up to 7300 feet to the highest point on the trail at Lamberson Spur. Roughly 2000 feet of elevation gain in under 4 miles and no water will definitely be a test of endurance.

There are several ok camp spots while still in the trees, but soon after you round Lamberson Butte, you'll be above tree line, and exposed to sun for the next few hours. For me and Jacqui, this was the hardest part of the hike, and I'm sure others would agree. At times the trail was hard to follow, but being September, I just followed the most used path. Eventually we topped out at the spur. There is a huge cairn to mark the spot, but we headed down the trail a couple hundred feet to a more shaded spot to take a well deserved break. 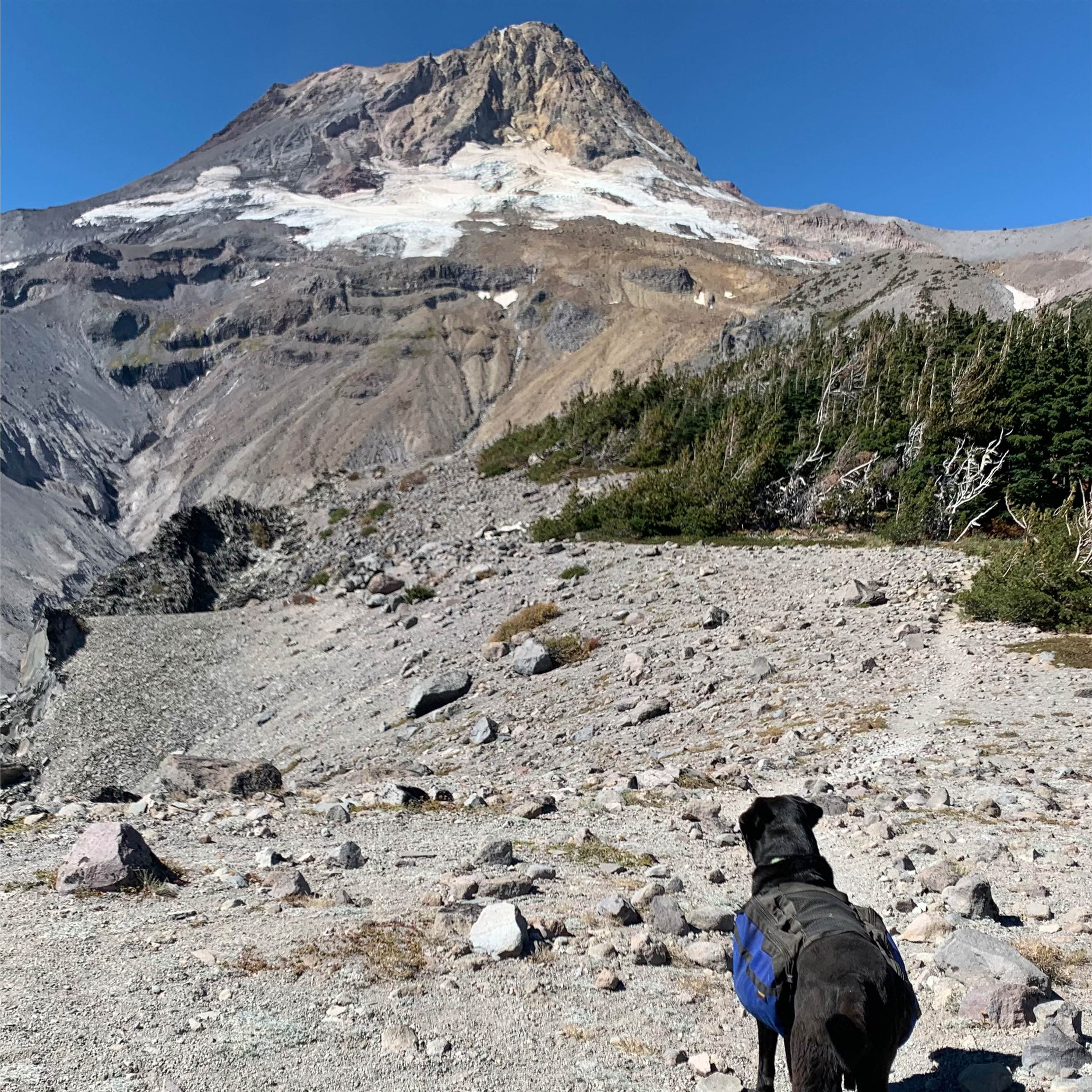 From there, it's all downhill  back to Cloud Cap. Less than 3 miles and 1500 feet of elevation loss. You will run into hikers going clockwise experiencing a climb similar to the one you just finished. You'll be treated to some beautiful views of the east side of the Cascades, and Mt Adams and the Hood River valley to the north. Before I knew it, I was back at my vehicle at Cloud Cap. Even though I know I started and ended my hike at the same elevation, I swear I climbed more than I descended. Turns out, I climbed uphill over 10,000 feet over the course of the trail!

Doing the Timberline Trail was certainly a challenge, but well worth the effort. For my pack weight, my base weight was about 11 pounds. The most water I carried was a gallon over Lamberson Spur. I definitely saw a lot of hikers carrying heavier packs, but I recommend going as light as you can if you want to do it in three days, or just have an easier hike. Jacqui carried her own gear in her dog pack. Three days was pushing my limit, and four days would be more manageable with a lot of breaks throughout the day. Stop by the Mountain Shop and we can get you geared up to hike the Timberline Trail!