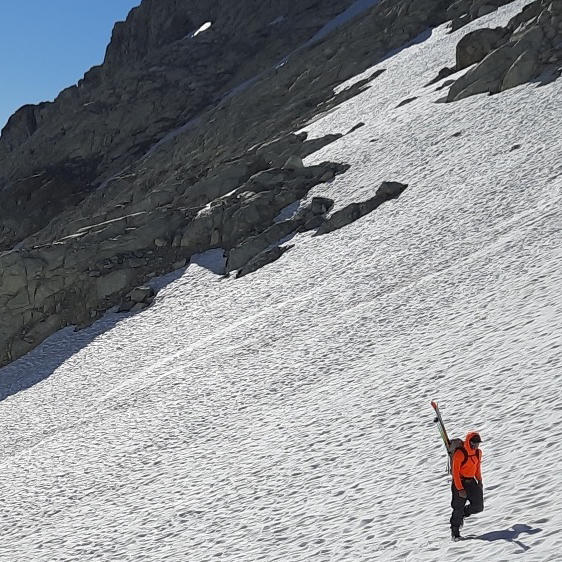 Mt. Daniel is a collection of five peaks straddling King and Kittitas counties in the Alpine Lakes Wilderness, and a gratifying destination for skiers undaunted by seasons.  Eric Schmidgall, who conceived the idea, and I set out to ski Mt. Daniel-East Peak, Sunday July 18, 2021. The route was 16 miles, 6,000ft of elevation and totaled 36 hours house to house. 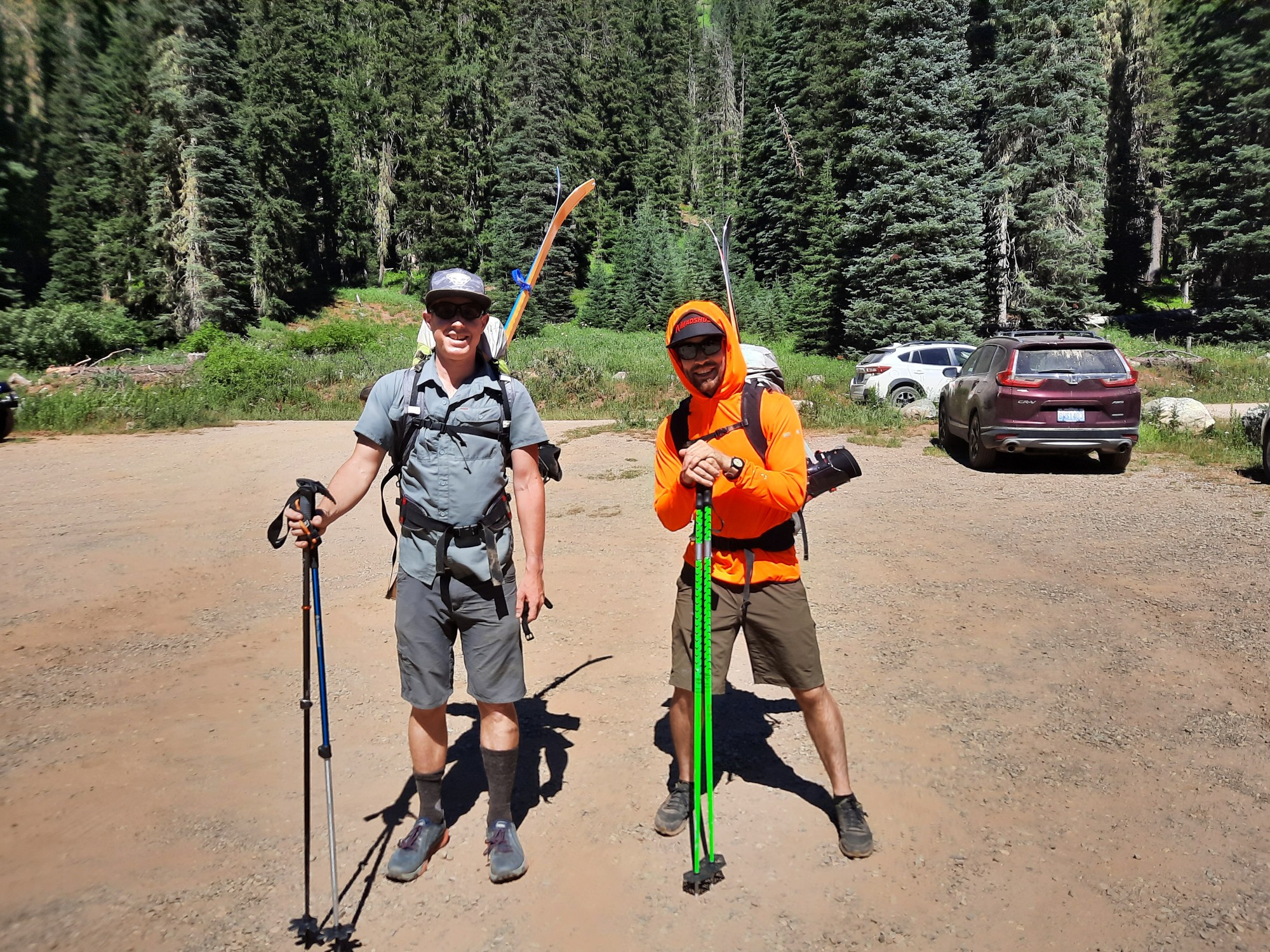 Summer time backcountry skiing may be an acquired taste.  If you think strapping skis, boots, and crampons to your already laden overnight pack is silly and a waste of time, I won't try to convince you otherwise.  However, if you choose to (as we did) there are some who may waste their time (when they see you near the trailhead with your skis) to tell you it's a waste of yours (as they did in our case.) Don't believe them. 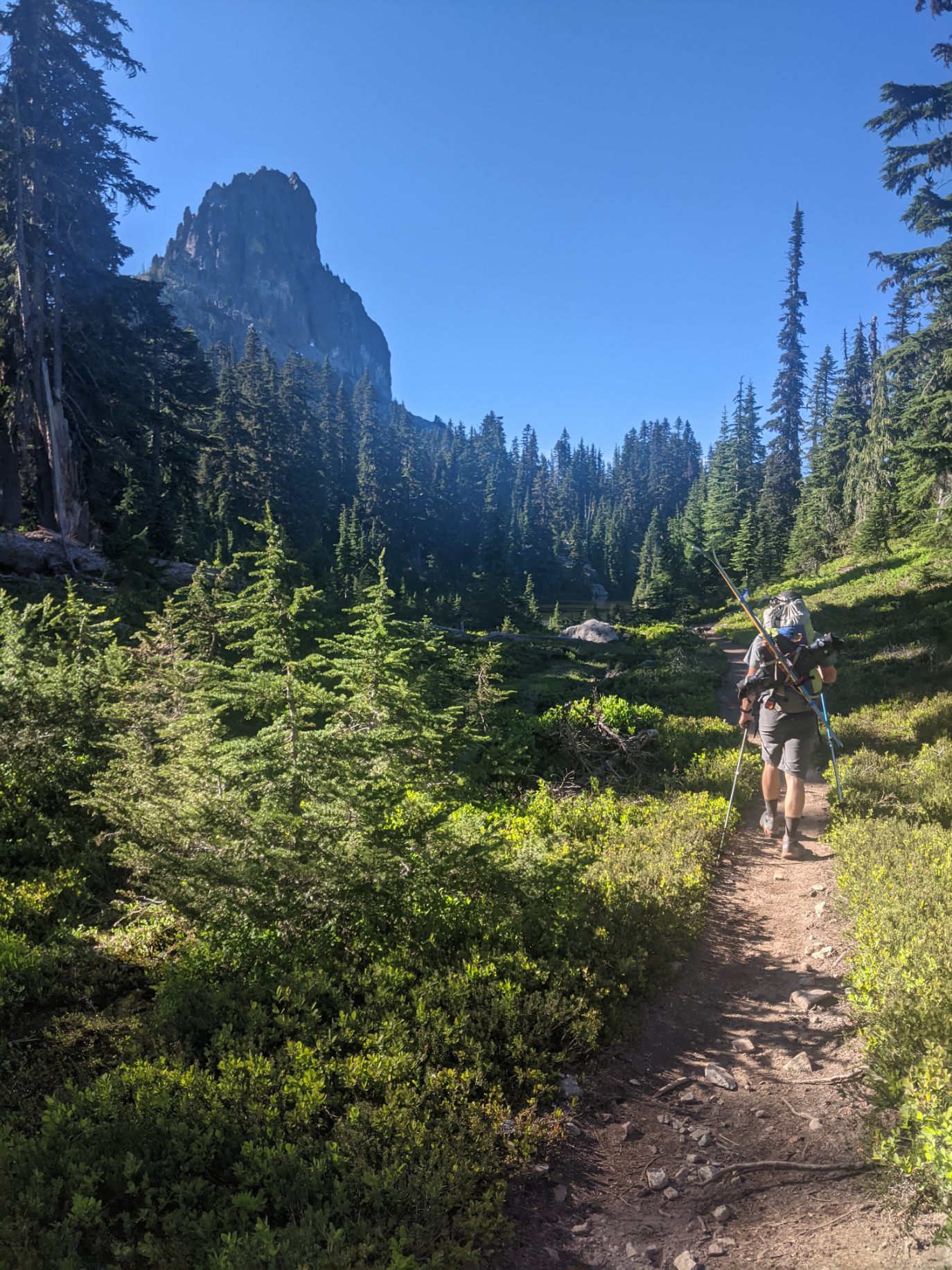 Driving from Portland aside, we started from the Cathedral Rock Trailhead and proceeded up Cathedral Pass Trail #1345.  After roughly 3.7 miles the trail intersects with the Pacific Crest Trail. Following the PCT a few hundred yards will bring you to a rough trail contouring counterclockwise around Cathedral Rock which takes you to Peggy's Pond. Stay sharp, it's a steep side hill and poorly defined in some areas.

The only other people that we saw hiking this trail going into the wilderness on a Sunday afternoon were a few people on the support crew for the indomitable Tim Olsen on his run for the fastest known time on the PCT.  Unfortunately, we missed a rare sighting of this man in action as we continued to our own destination for the evening, Peggy's Pond. 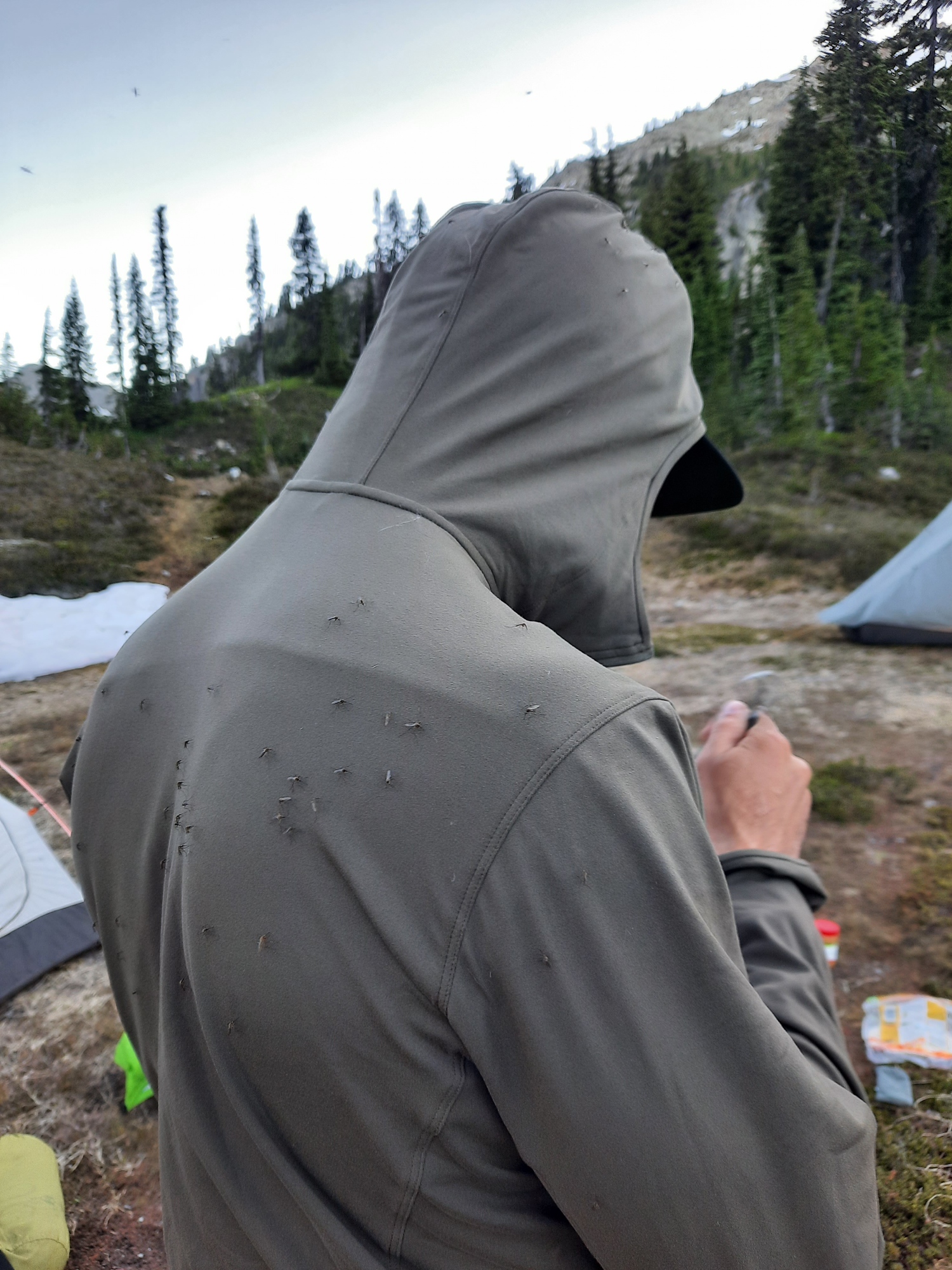 Solitude and all the mosquitoes from a 1 mile radius awaited us at camp, where we lived by the maxim “a rolling stone gathers no moss-quitoes.”  After the initial set up, requisite water gathering, and nourishment, I was thankful to find out there apparently are no holes in my tent, as I retired early to listen to the croaking of frogs, running water, and buzzing insects while watching the mosquitoes swarming just outside the mesh.  Bring insect repellent! 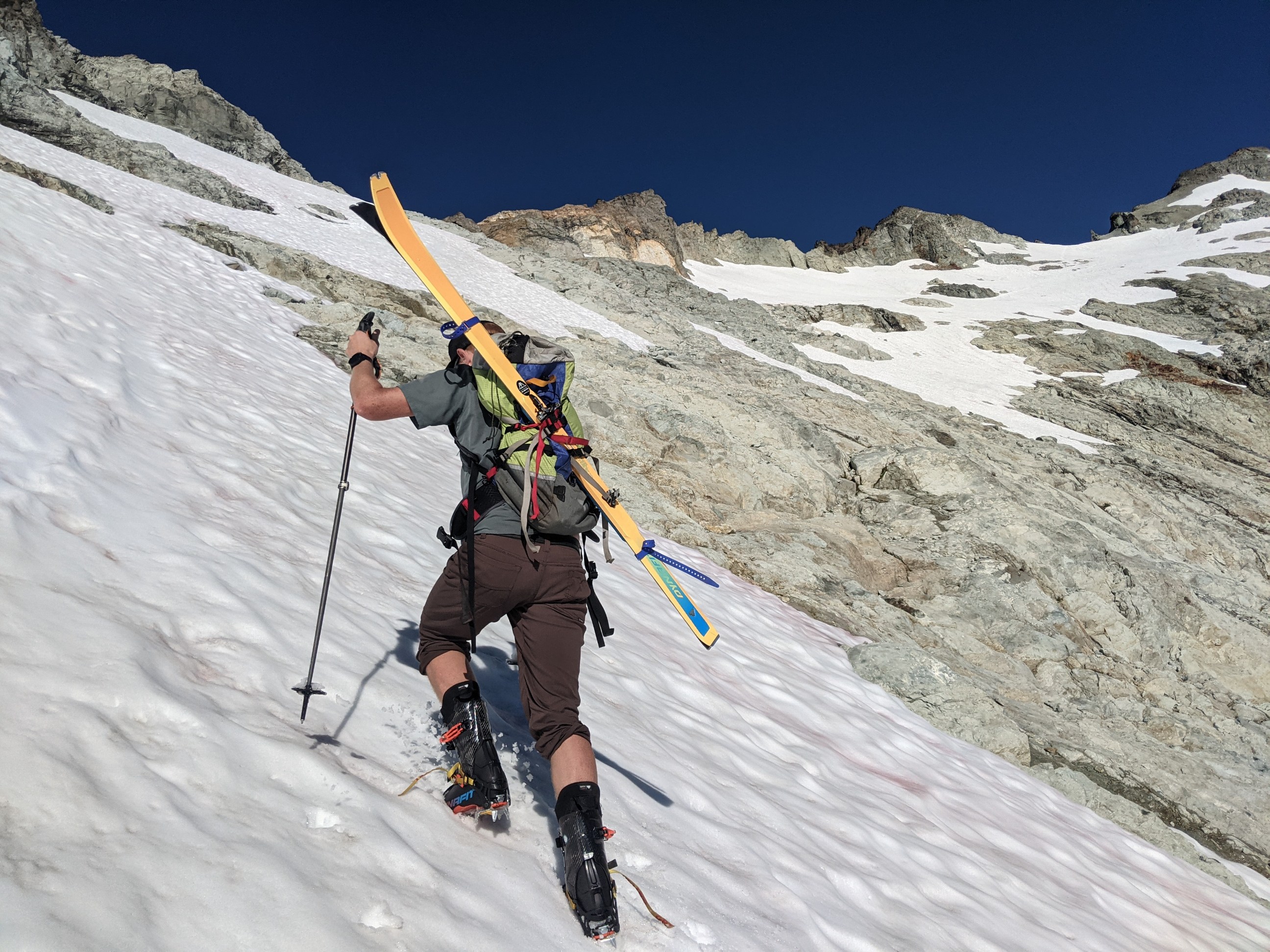 Continuing from the pond in the morning we chose to follow the basin, hoping to see enough snow for a completely covered route to the ridge. Finding just that along the southern slope a quick boot pack put us just below the ridge which we followed to the summit of Mt. Daniel-East Peak. Not to be confused with Mt. Daniel-Middle Summit, Mt. Daniel-West Pyramid, Mt. Daniel-Northwest Summit, or just plain Mt. Daniel, which to be fair look like delightful destinations, but they were not part of our plan. 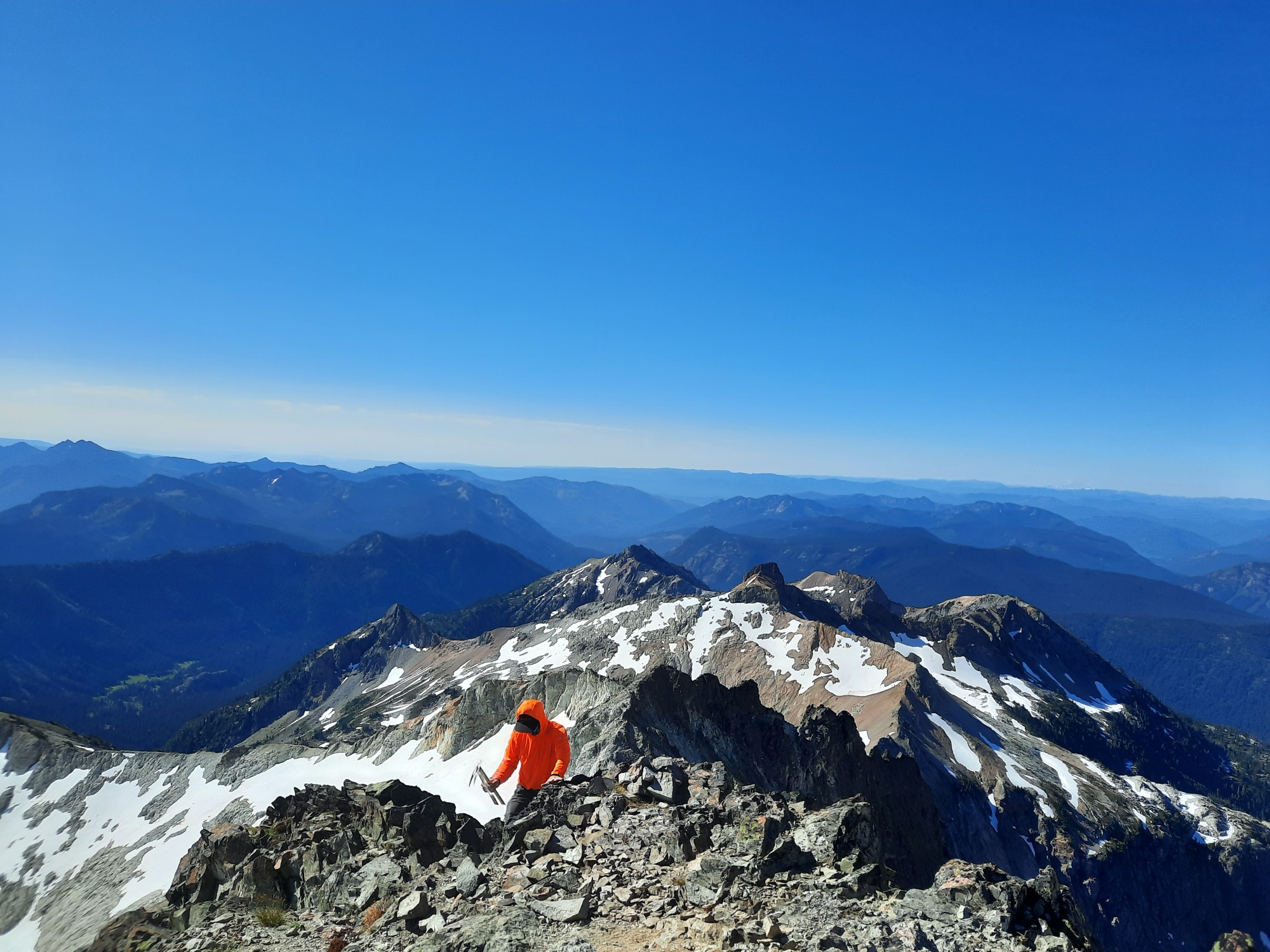 Skiing the route in reverse, we took the option to boot up and ski a quick 400ft of 35-45 degree soft summer snow which may have been the best turns I've skied in July this side of the equator. Overall it was a great trip, time well spent enjoying the outdoors with friends. 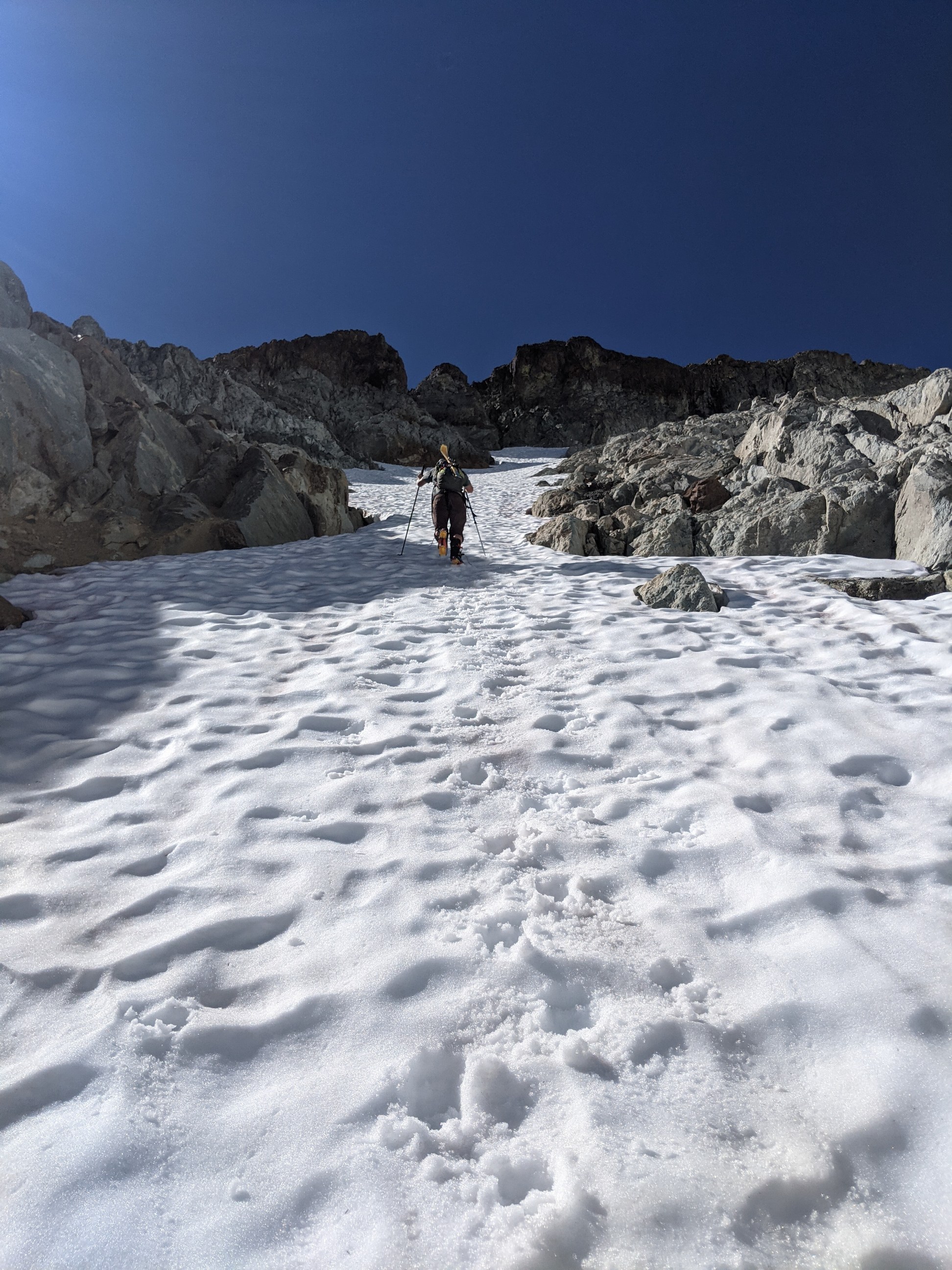 **This route was completed on July 18, 2021. Conditions change daily in the mountains. Do your research when planning your trip**