Scrambling | Tatoosh Traverse in a Day 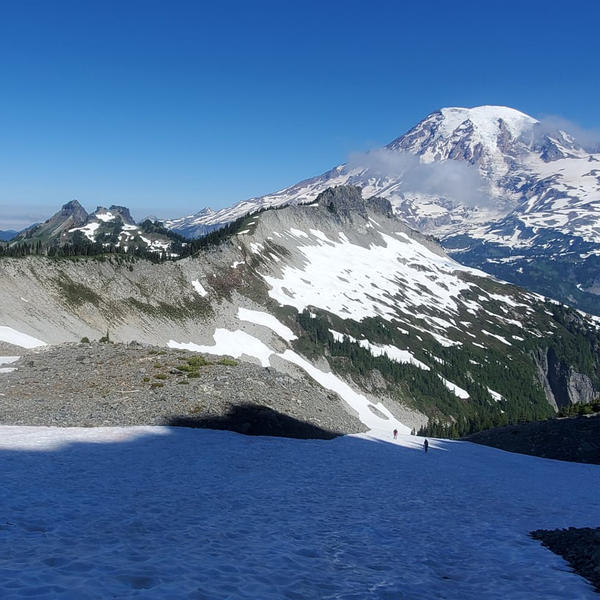 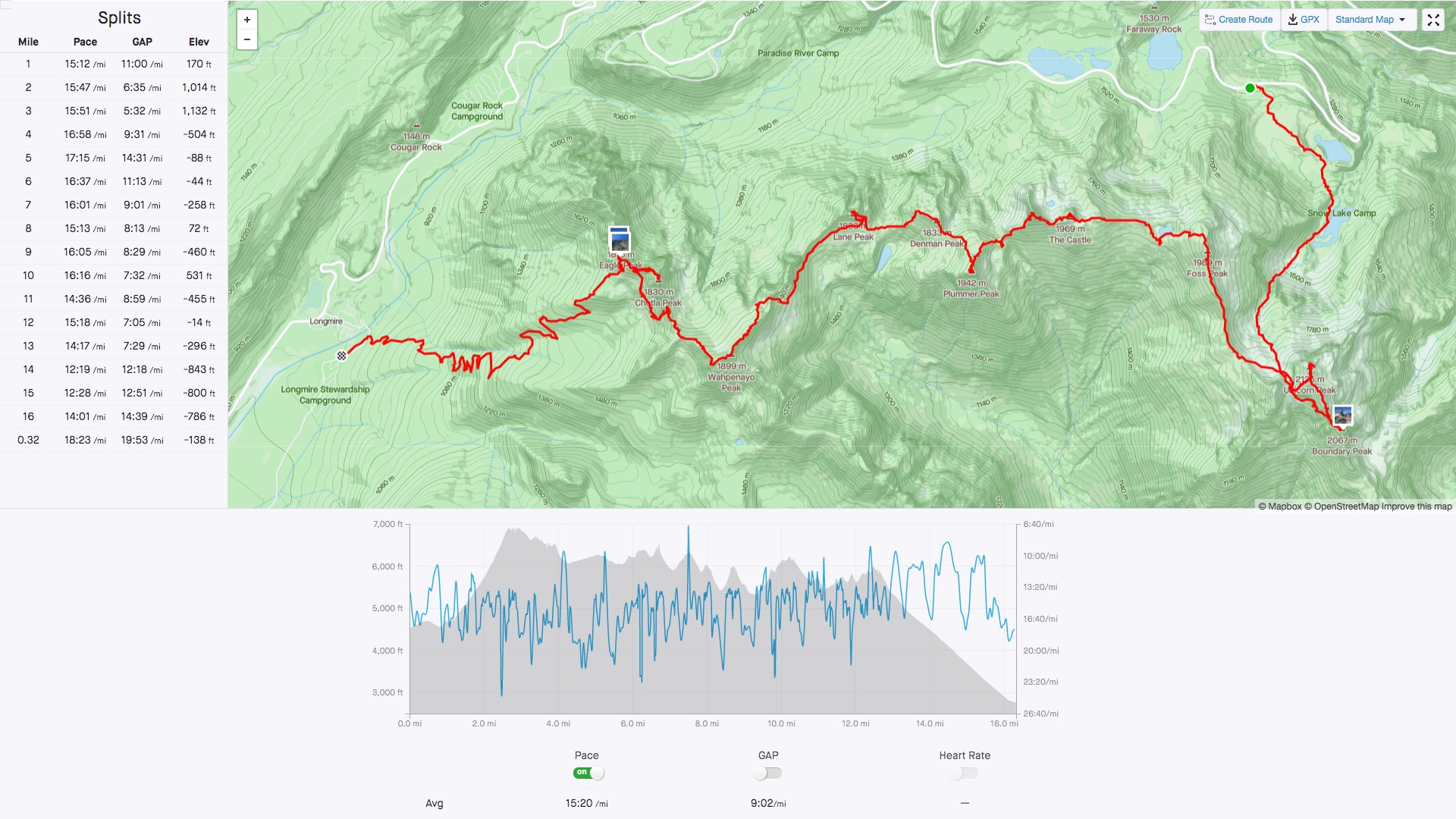 Snow Lake to Unicorn Peak
Typical patchy snow coverage, though snow is a little light for this time of year. Both couloirs are filled with snow still, however the upper couloir is more thin, and therefore makes any glissading down more consequential...as the fall line takes you right in to rocks that would normally be covered. Scrambled up/down Unicorn.

Unicorn to Boundary
Stayed on the ridgeline between the two peaks and scrambled up a low 5th class crack on the NW face of the climb. Descent is preferable on the west side down a side trail.

Boundary to Foss
From Boundary, we took a NW bearing to the saddle between West Unicorn and Unicorn...this kept our elevation change/distance at a minimum and was fairly enjoyable. Some light down climbing accessed the snow slope to the saddle and made for a quick traverse. We scree skied from this saddle down the couloir we came up an hour prior and continued a NW bearing to the ridgeline south of Foss. Easy, snowfree until the summit of Foss, a class 3 scramble at best.

Foss to Castle
Boot skiing to the lake directly west of Foss and filled up water. We maintained the saddle/ridgeline through this section, which was pretty straightforward. Scrambled up/down Castle in low 5th class terrain.

Castle to Pinnacle
Rather than skirt around the cliff bands to the south part of Castle to make towards Pinnacle, we found a small saddle just under the Castle summit that let us go directly towards Pinnacle. Light downclimbing/buswhacking felt great and made for quick work. Scrambled directly up Pinnacle from the east on an airy arete, also low 5th class. Descended via side trail on the SW corner of Pinnacle.

Pinnacle to Plummer/Denman/Lane
Followed user trails through here. Easy walking with a few overgrown sections. Summitted both Denman/Lane from the east sides of the peaks. Stay on the ridgeline for Denman and Lane, we made our way up the easternmost couloir. The couloir on Lane has several mini gullies that each person can scramble up on their own...which eliminates sending rocks down on your partner. 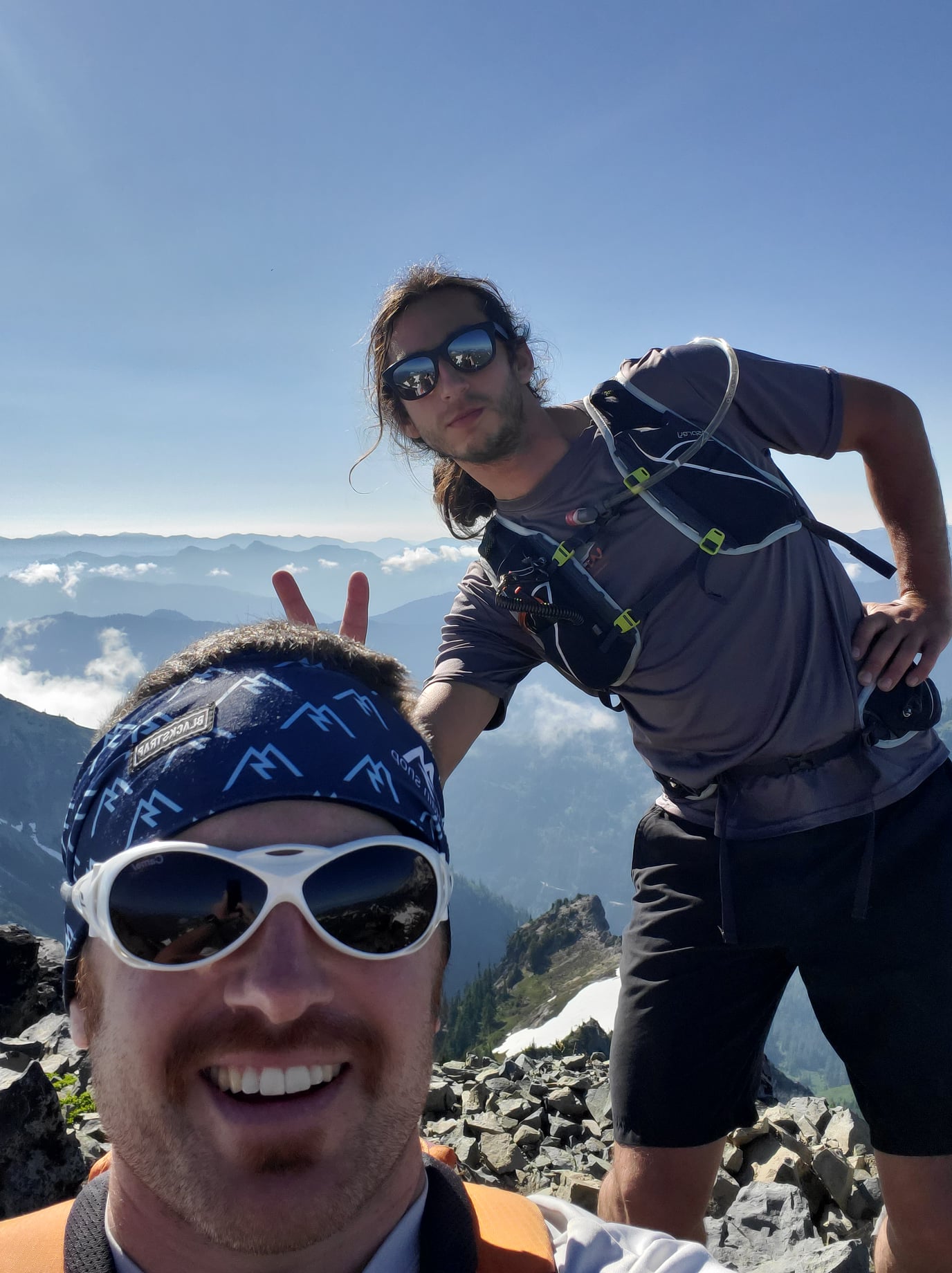 Lane to Wahpenayo
Descend the same couloir down Lane and come underneath the south face of Lane through your easiest access. It is easy to get cliffed out while trying to get underneath Lane, so be mindful of weaknesses that give you access.

We did not feel there was any "good" way to traverse to Wahpenayo, so we stayed as high as we could and just contoured our way SW until a larger boulder section that we paused at. From this bouldery section, we went straight up to the ridgeline that had a small saddle and a few scuffy trails. This allowed us to move to the other side of the ridge and yielded easier terrain to navigate. Plus, ample snow coverage on the NW face made for easy walking. We also did not feel there was a good way to summit Wahpenayo, or we didn't find it at least. Lots of bushwhacking and multiple false summits led us to a small path that let us do a short 3rd class scramble to the summit.

Wahpenayo to Chutla
We totally botched this section, or again maybe that's all you can do is botch it. We continued west from Wahpenayo on a well defined trail that eventually petered out. This got us to the ridgeline towards Chutla...but no trail and no fun. Lots of thick and stout trees to push through that were rough on the sunburned legs. If anything, definitely recommend staying east of the ridgeline to stay out of the trees...at least some snow coverage allows for easier walking, but overall this section really brought down morale and energy and gave us a few slips/slides that also scratched up sunburned legs.

Eventually, we found the side trail on the west side of the ridge, but could not find how to access it from a better direction. Once we got there, we debated in continuing, energy was low, lost a lot of time and frustration was high...but we got a few chocolate coffee beans in us and continued towards the saddle between Chutla/Eagle.

Chutla/Eagle/Longmire
Ditched packs at the saddle and made quick work of both, easy paths going up/down both peaks. Despite the easy trail going up Eagle, we decided to take the 5th class vertical wall and take the easy trail back.


Trail ran back down to Longmire to the car and drank a lot of cranberry juice.

**This route was completed on July 10, 2021. Conditions change daily in the mountains. Do your research when planning your trip**