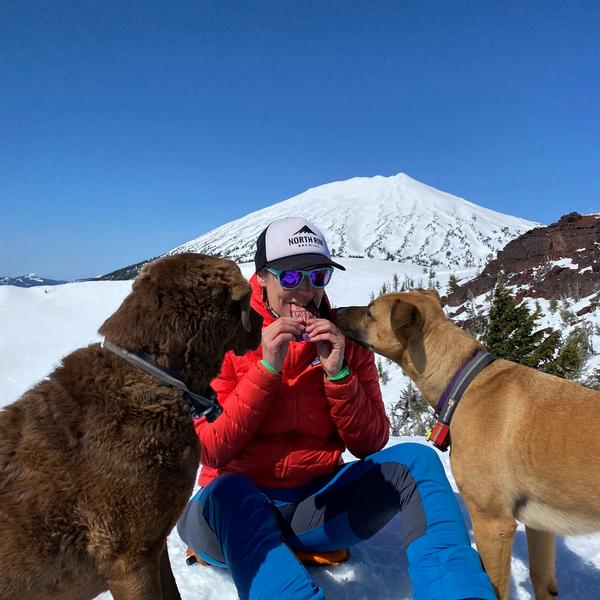 Well, after as many failures as attempts, minus 1, I finally conquered the summit of Kwhol Butte!  It seems so simple...a typical 15.5 mile ski tour with a decently straightforward route.  Well...there was that one time in April I forgot the skin wax, the one time a whiteout storm rolled in on us, the one time we missed a turn...I could go on and on, but I won’t.

What matters is we did it, it was amazing and totally worth it!  I would do it again tomorrow if I had time!  We started around 9:30 AM from Edison Sno park and skied via Snowmobile road 34/134/4 toward Kwolh Butte Shelter.  As it was a Tuesday, we only saw 4 sleds and zero other skiers!  The trail meanders through open road for the first 4 or so miles, then gets a bit narrower through the trees below the base of Kwolh Butte.  Here we got our first sights of Mt. Bachelor and finally our target, Kwolh Butte. 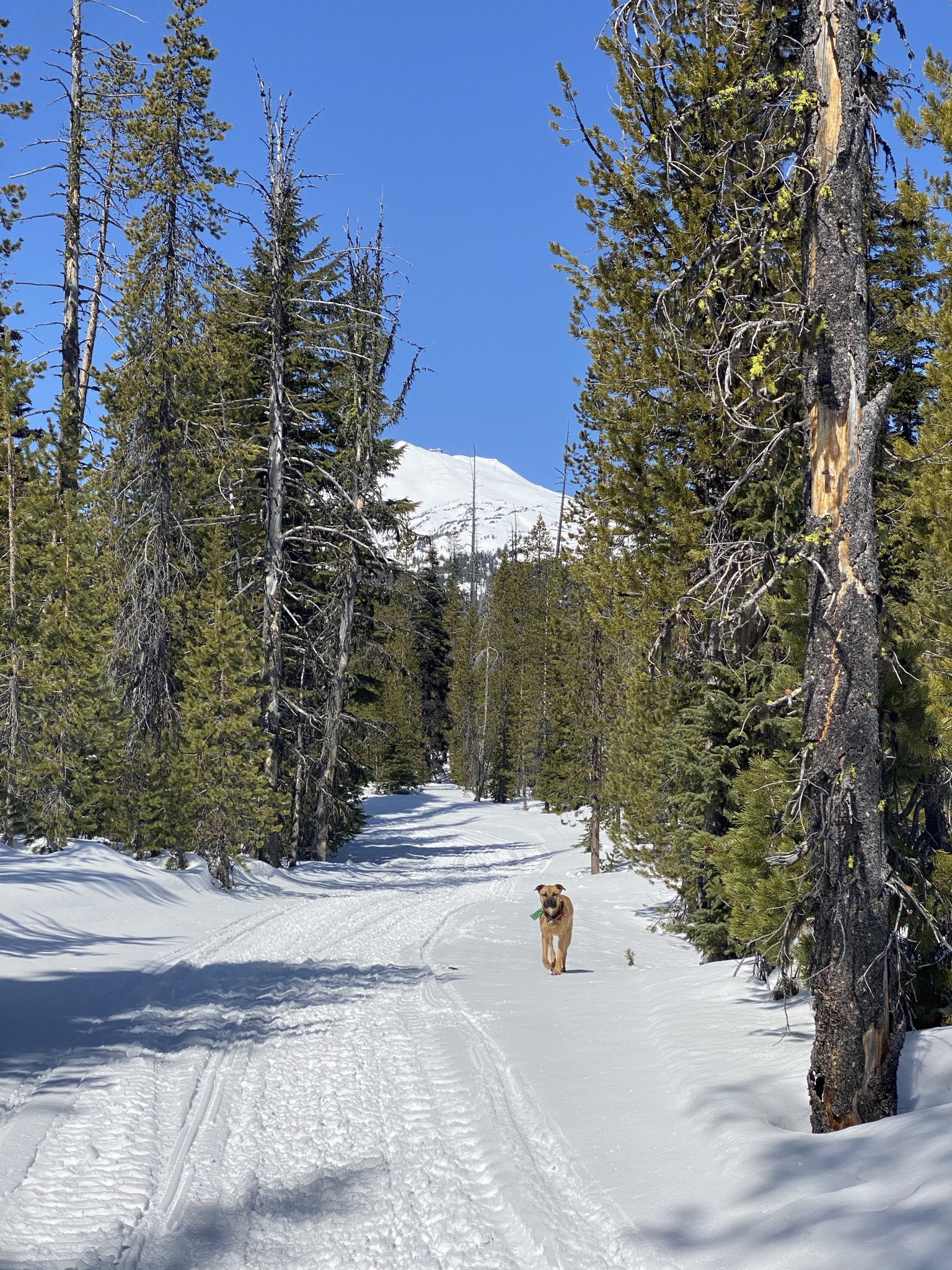 With about 2 miles left to go on the road to Kwolh Butte shelter we took a hard left and followed a sled trail uphill toward the South Ridge line of the Butte. It was clear from the Topo map that this would be our easiest, least exposed, most direct route from our position.  We meandered up the path of least resistance and eventually found ourselves near the top of the Butte just below the summit crater. 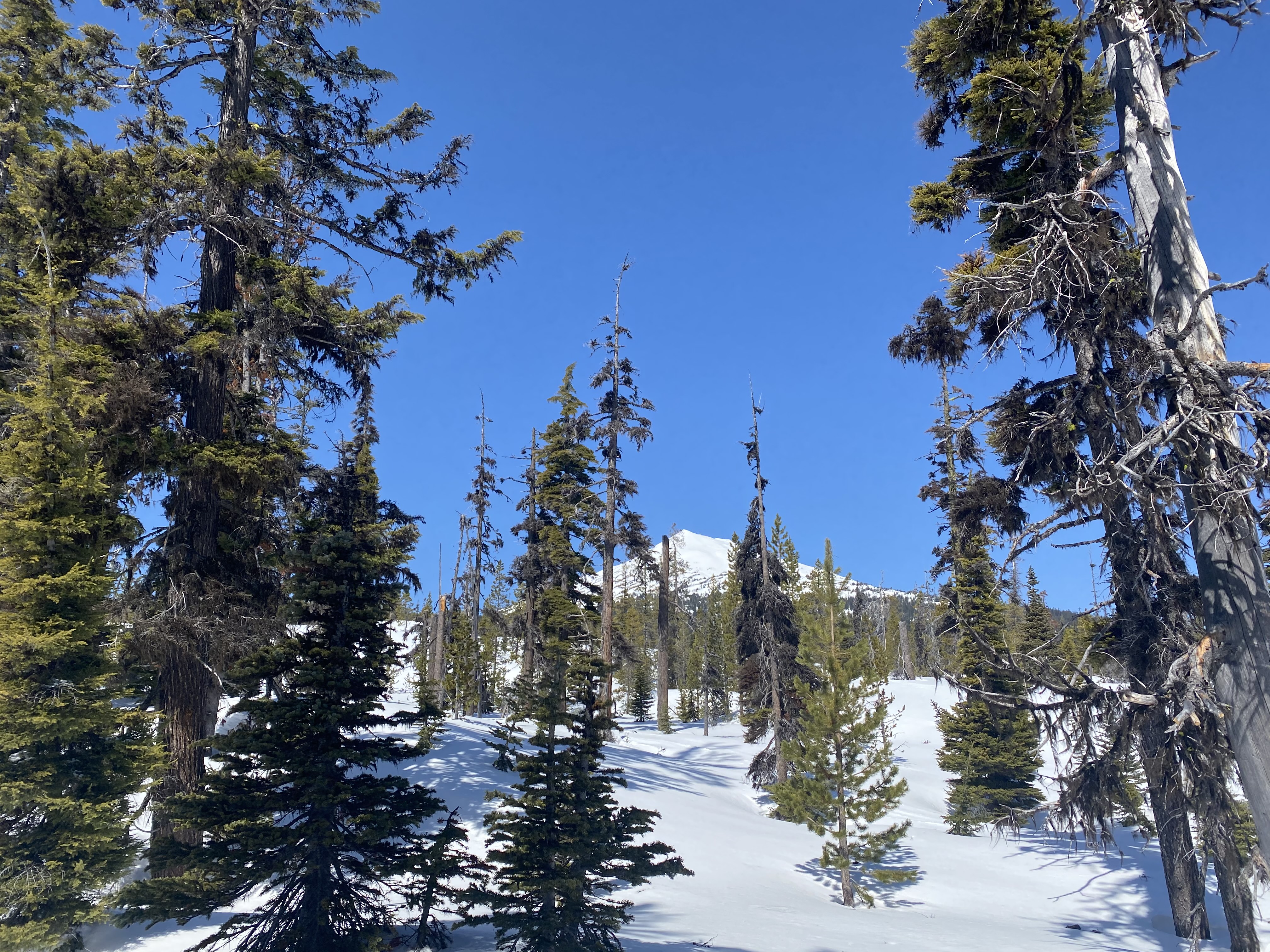 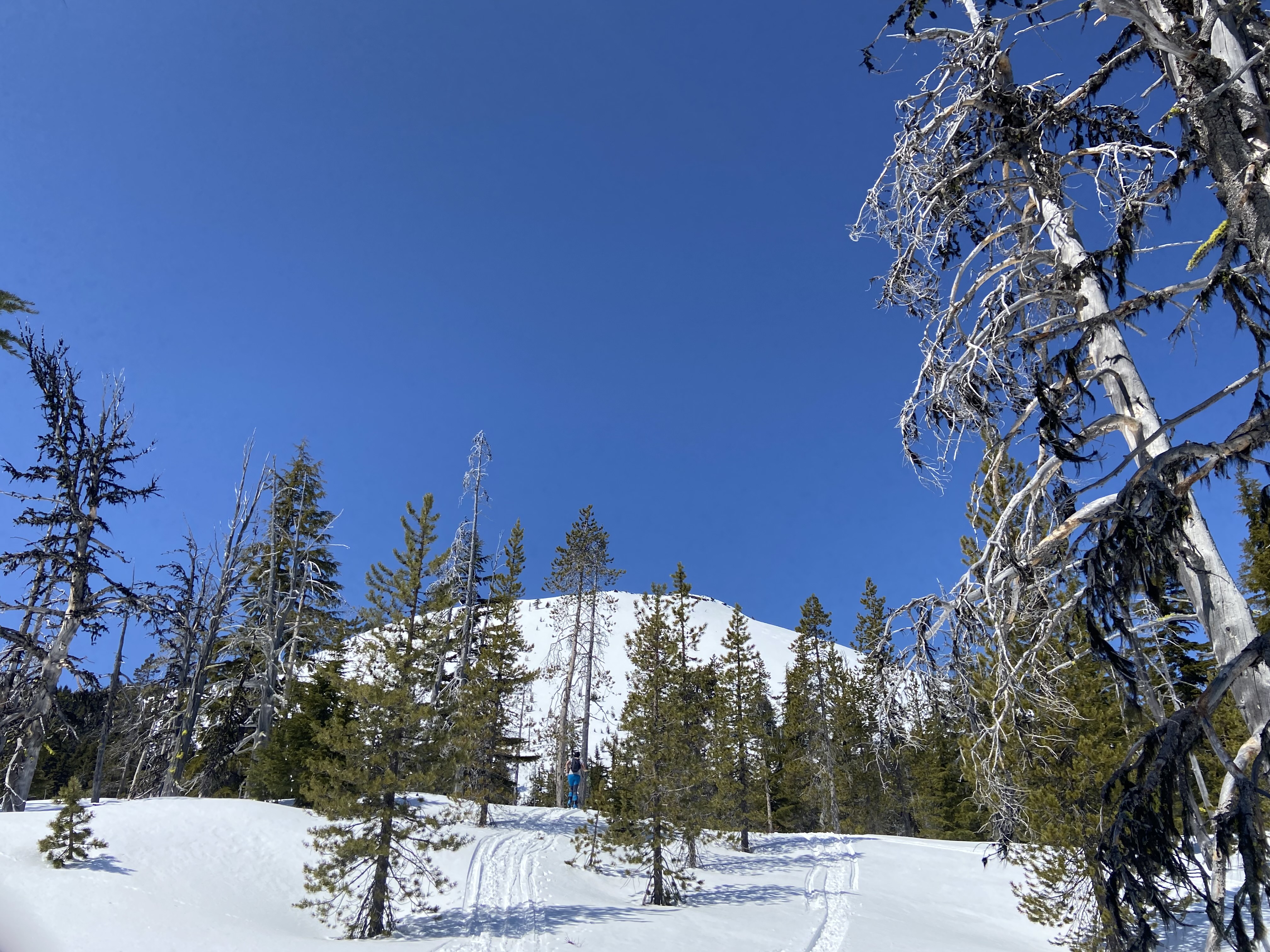 Being careful not to put ourselves into the crater, we skirted up through the lava rocks and trees at the very top that were covered in rime ice and some softer snow.  Because lava rocks are not very forgiving to skis, and none of us cared to return home to P-Tex our bases, we removed our skis/splitboard for the last little bit of the ascent. 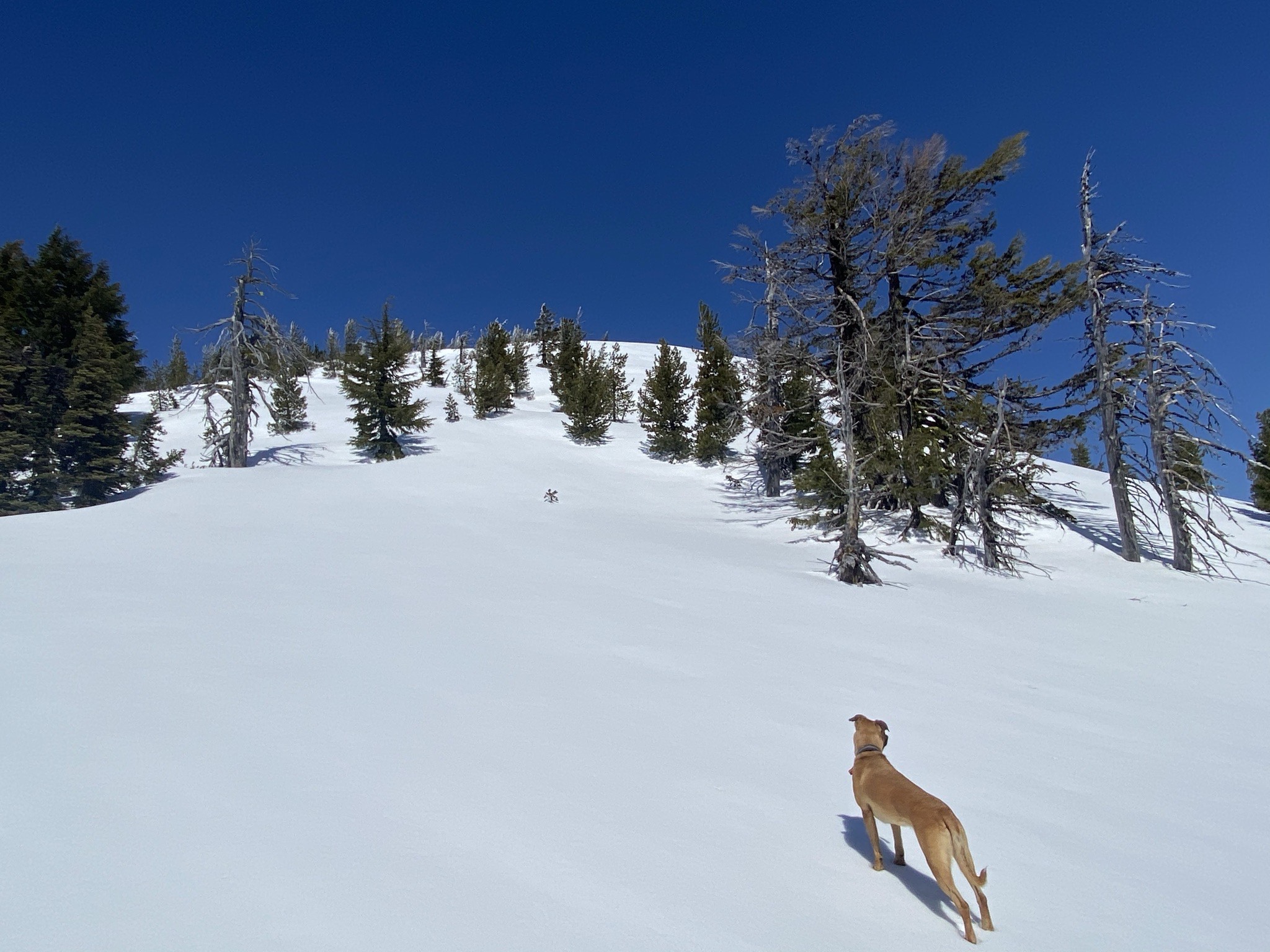 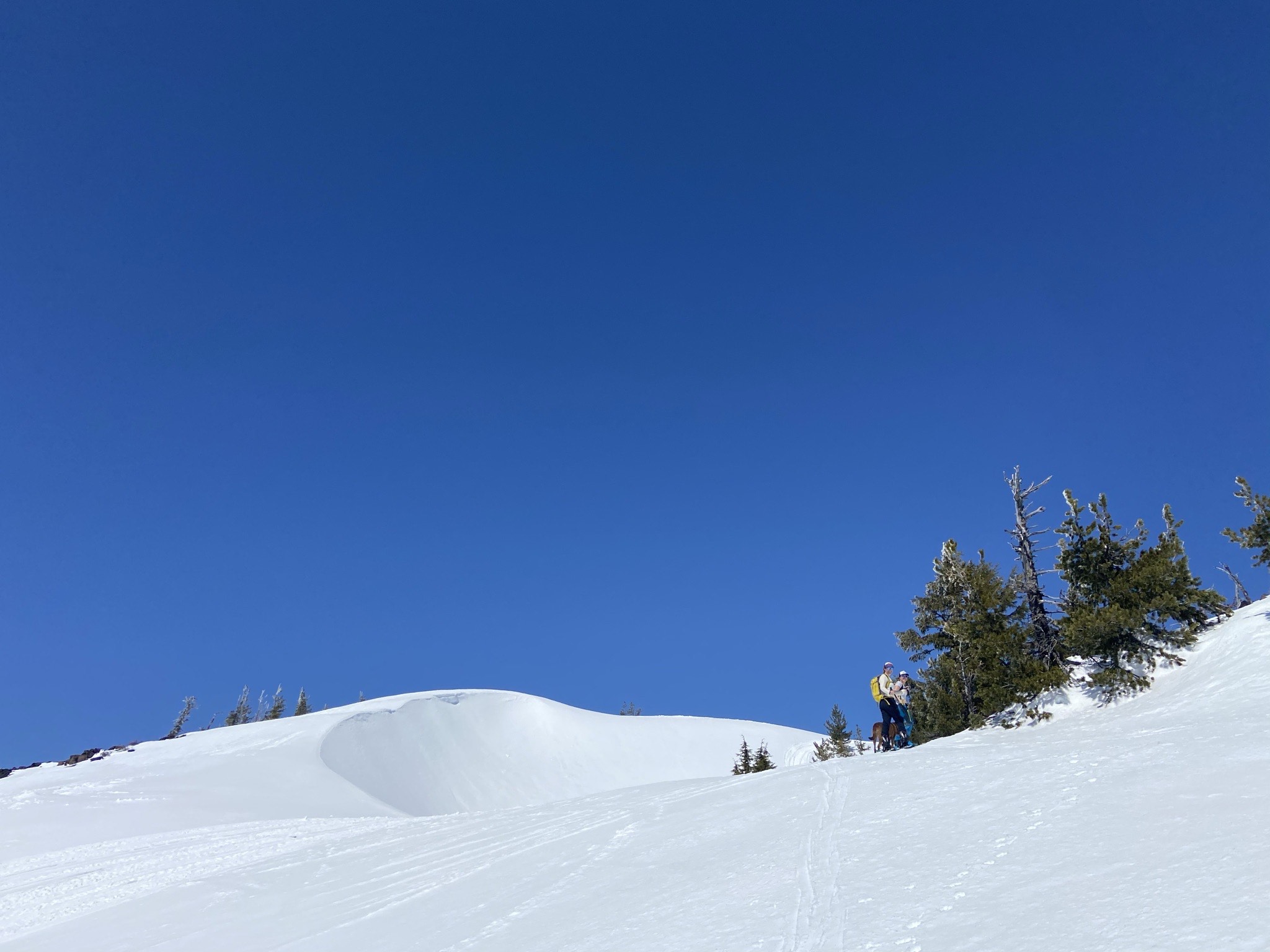 After taking in the views and enjoying some snacks at the top, we headed down with plenty of daylight to spare! The ski down the Butte was straightforward, buttery and perfect spring conditions. 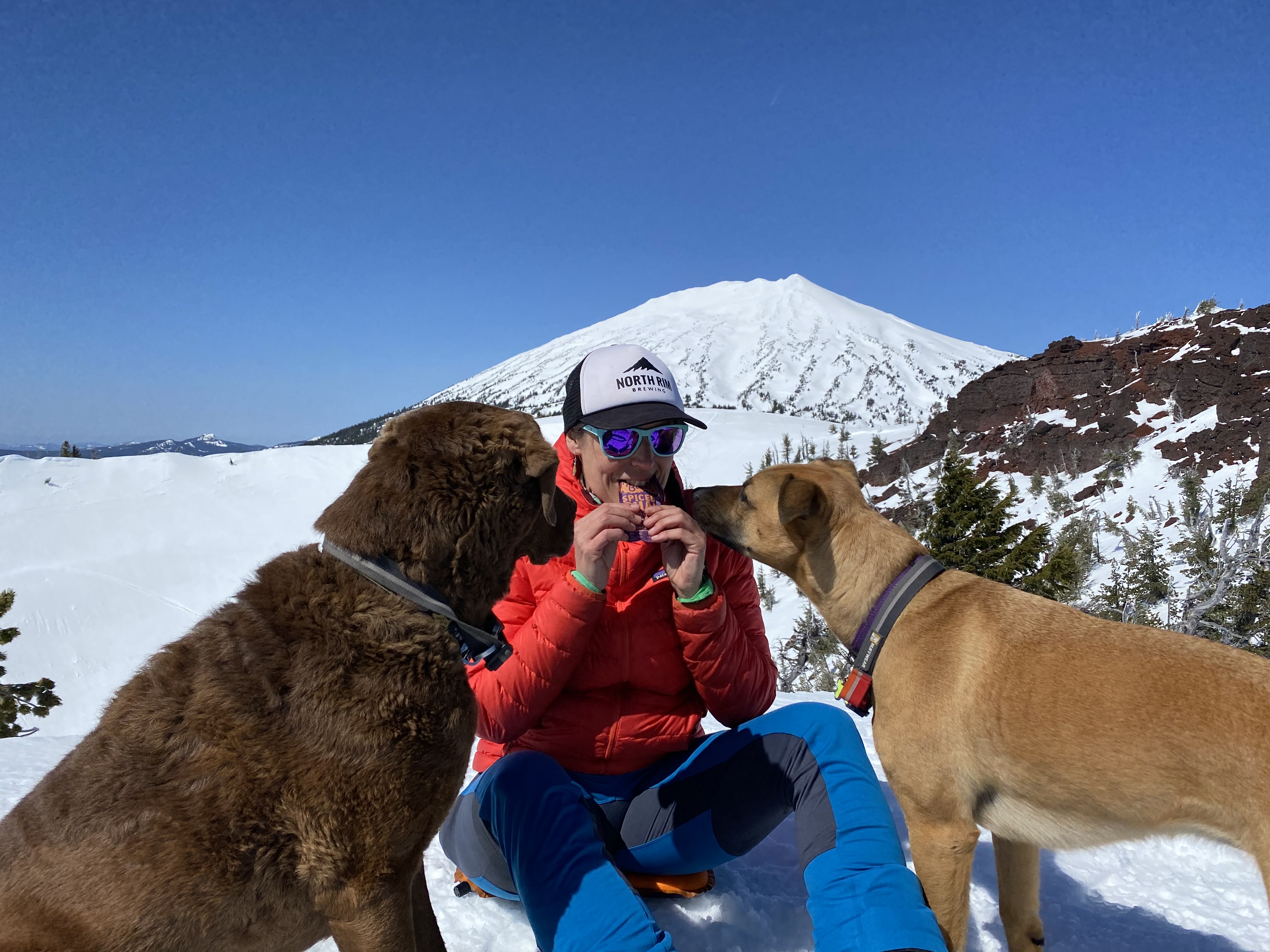 Summit snacks - Spiced Chai Trail Butter is a MUST! 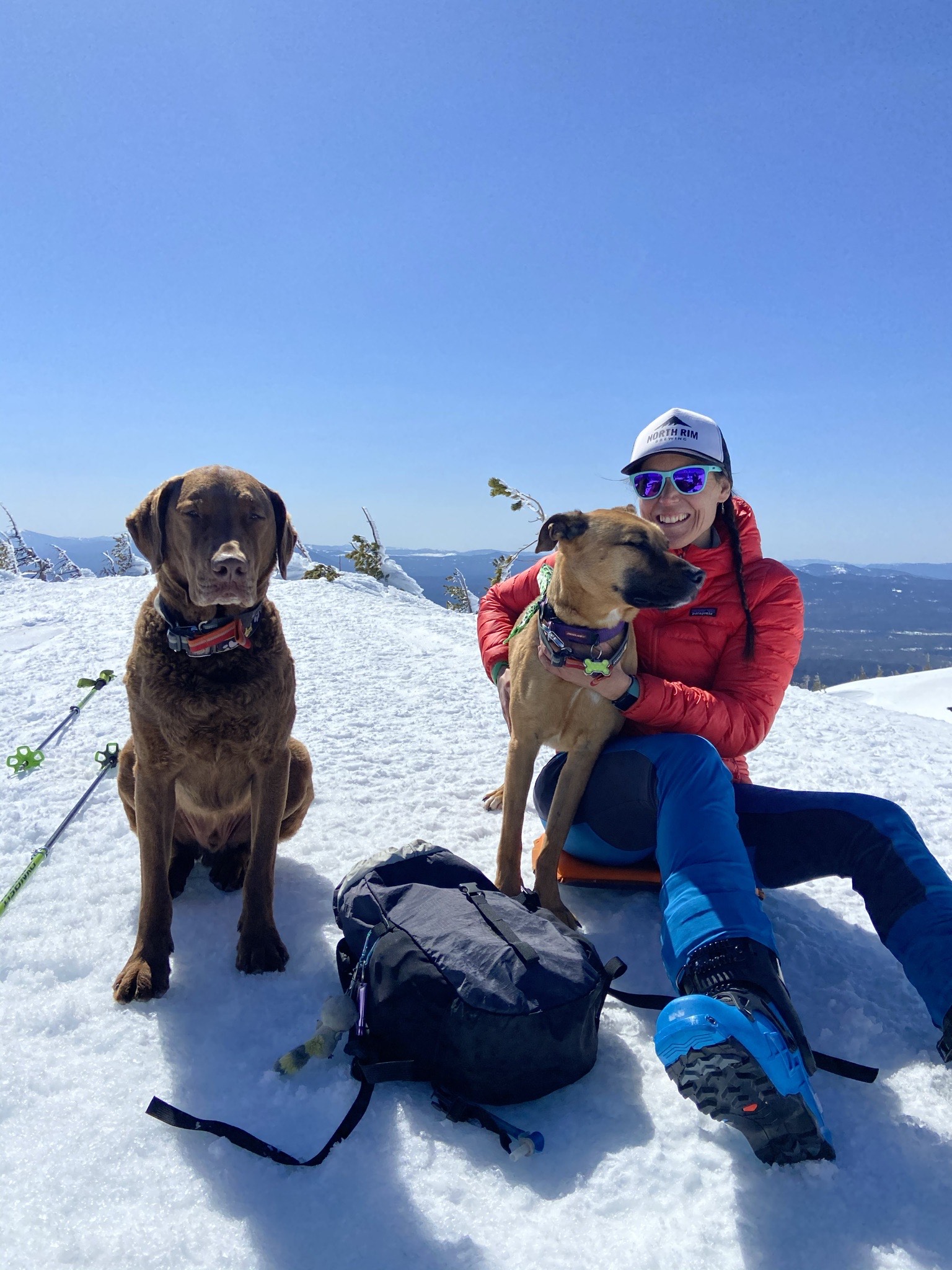 Summit snuggles all around!

Keeping clear of the lava rocks and trees, there was plenty of snow coverage for the way down.  We mostly followed our ascending skin track down, but took the opportunity to make fresh tracks whenever possible!  We joined back with the Snowmobile road precisely where we had diverged from it and headed down back to Edison Sno Park. 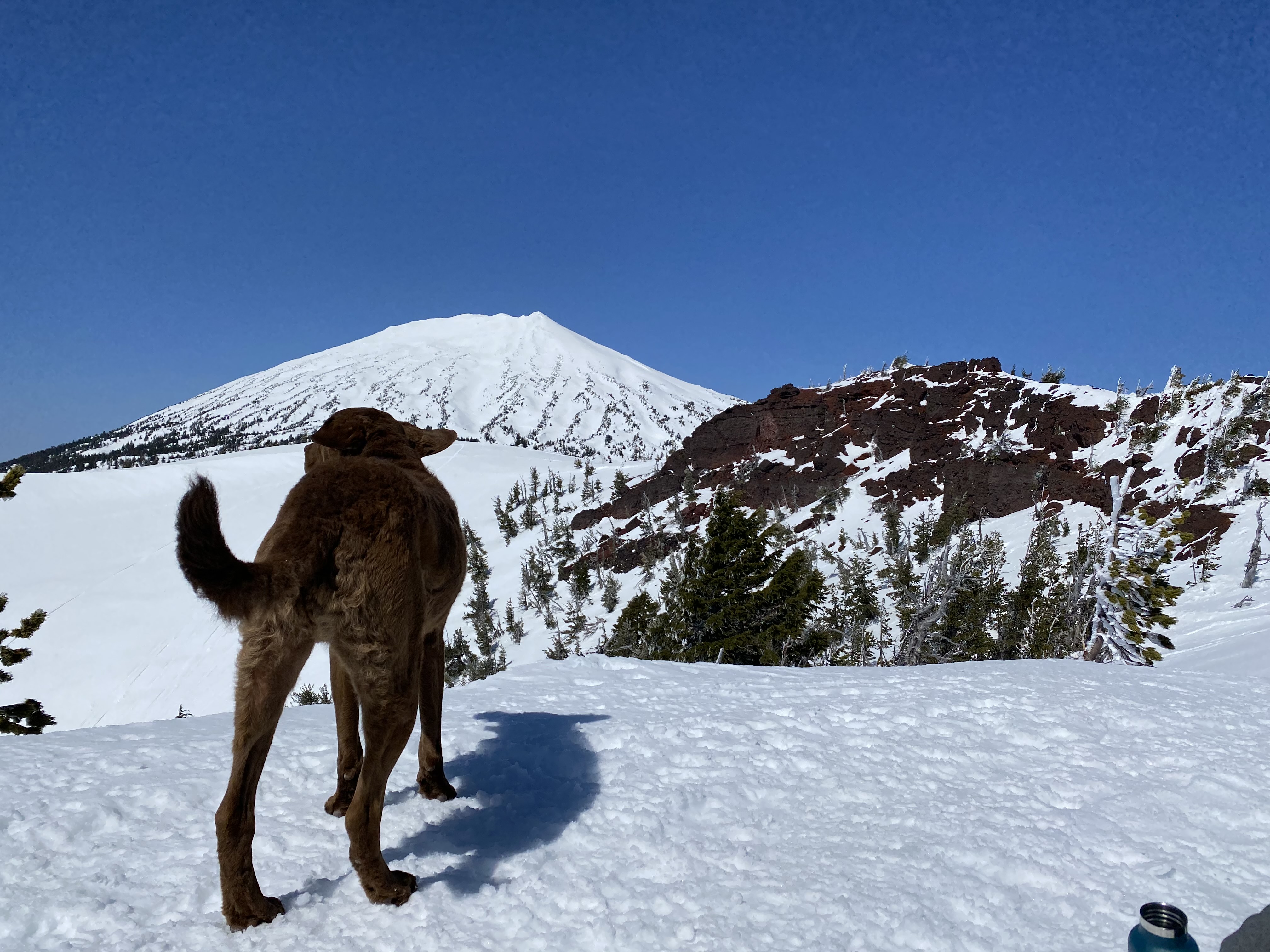 Alex with his ears flapping in the wind. 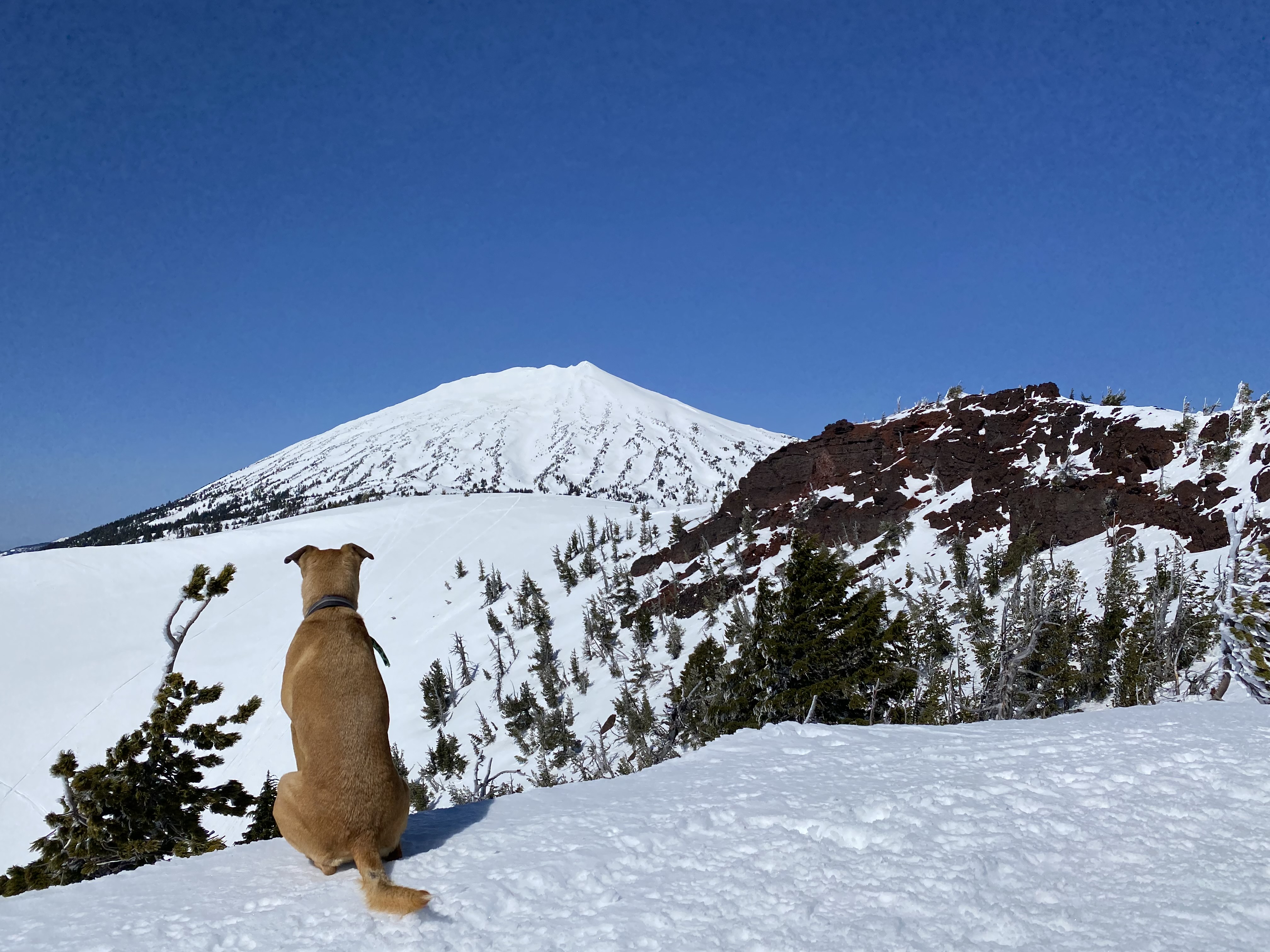 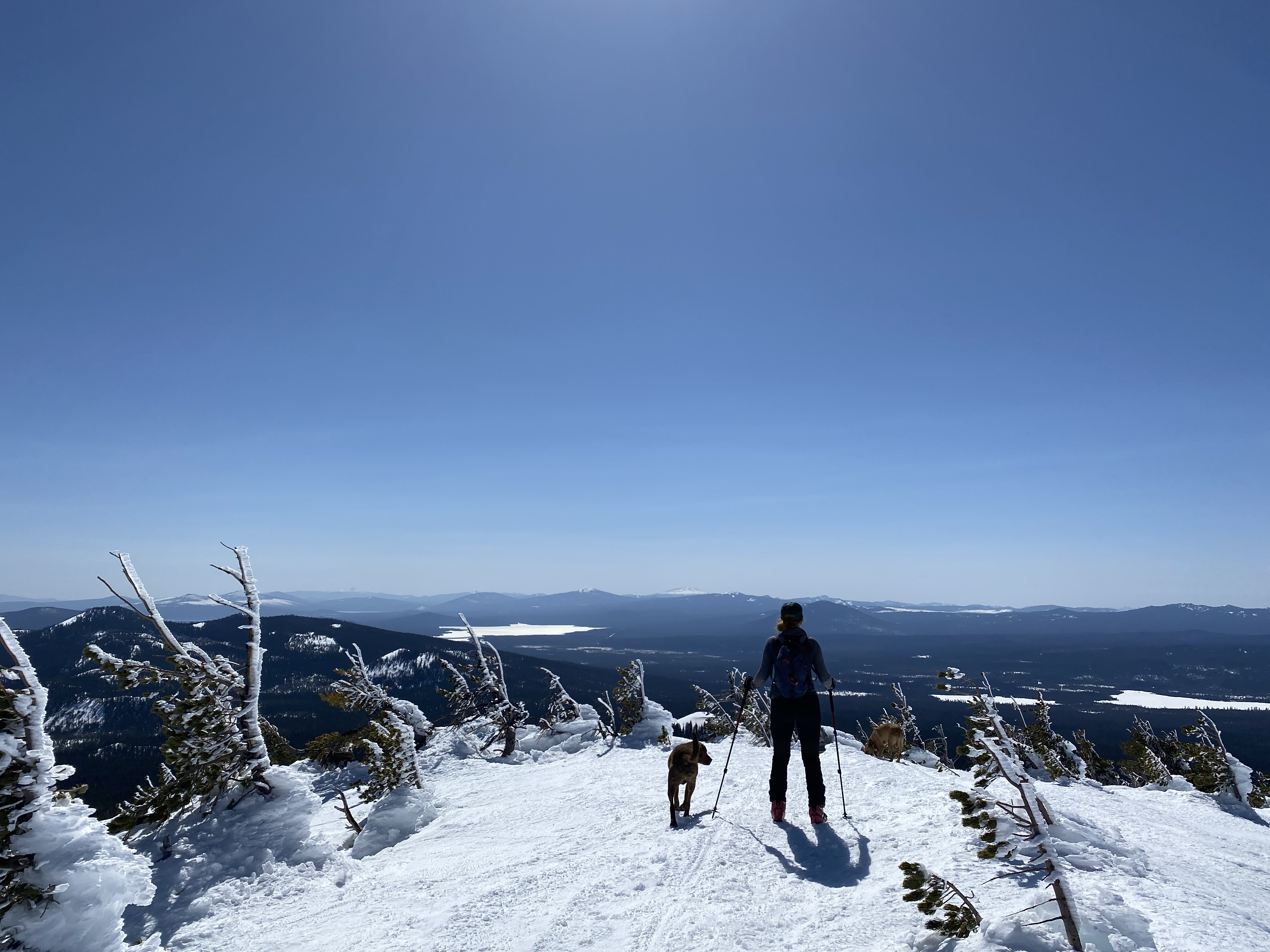 Admiring the mountains for days.

The descent is a bit of a slog, however neither splitboarder nor other skier had to put skins back on their mode of transportation! I was on my Voile Objective BC skis which have scales and are basically made for the perfect conditions we had for this trip!  The patterned base makes it very easy to climb the little hills on the way out. 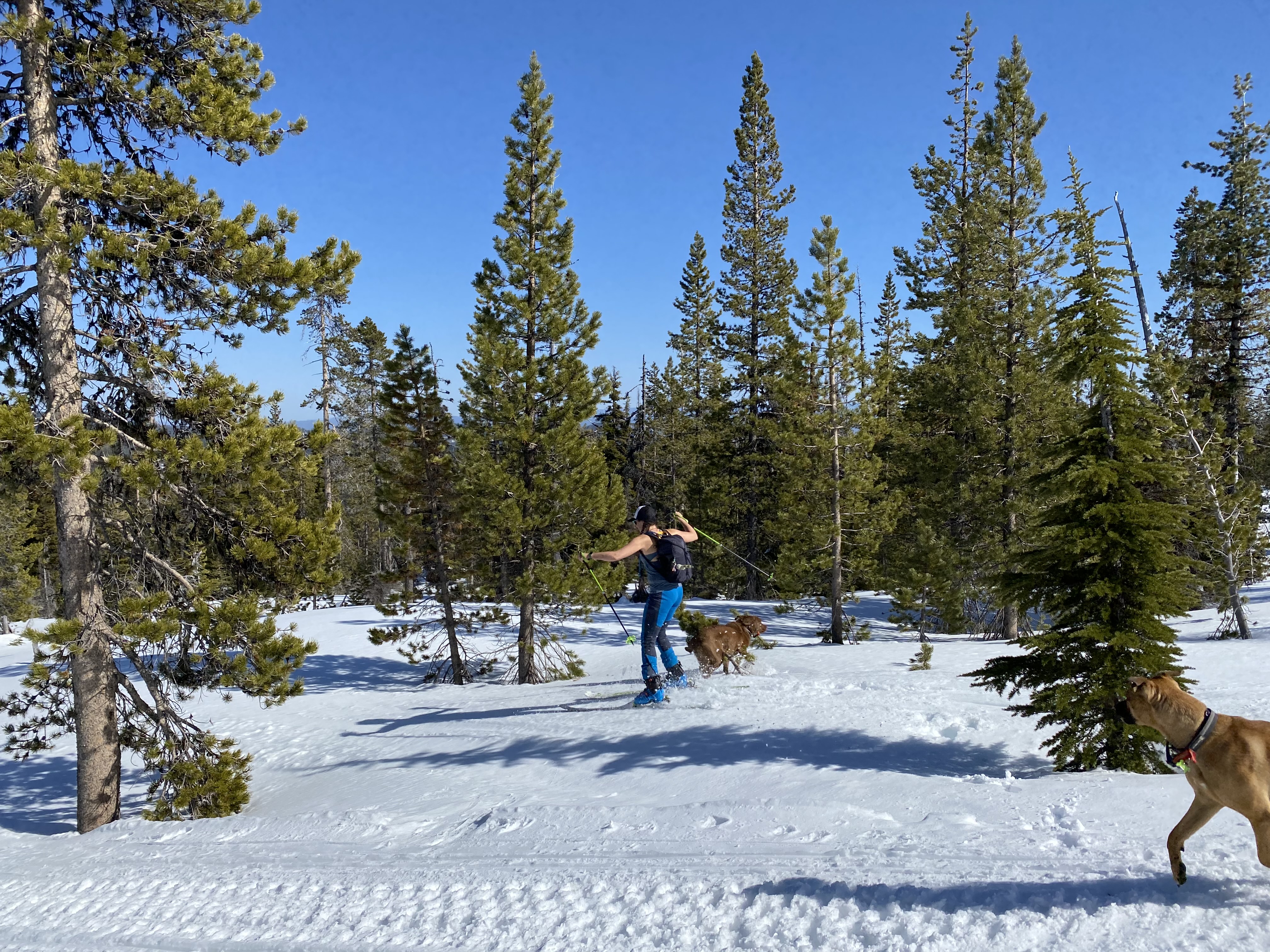 We returned to our cars around 5:00, excited and invigorated that we had finally achieved this seemingly White Buffalo goal we have been attempting for at least 5 years! 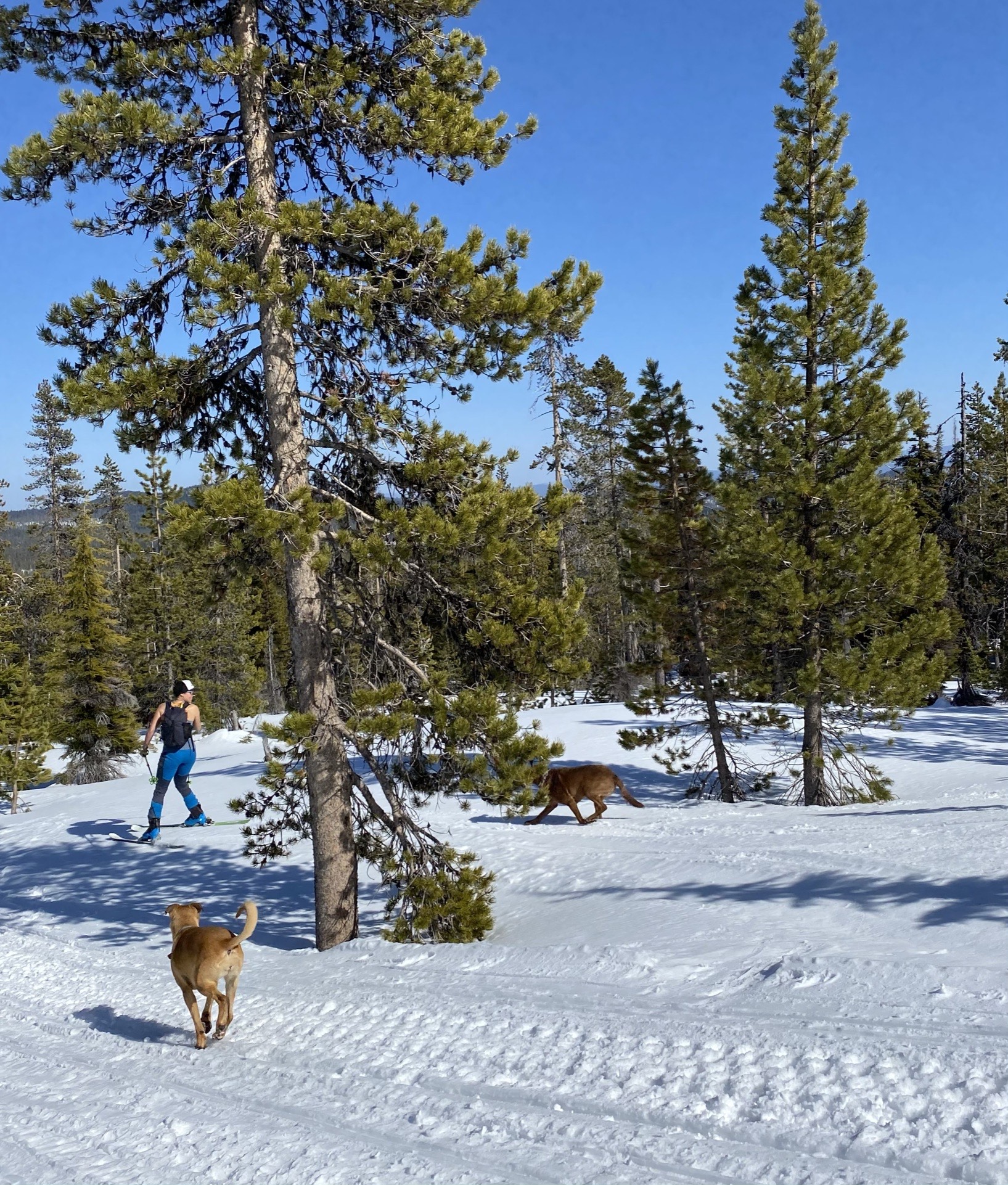