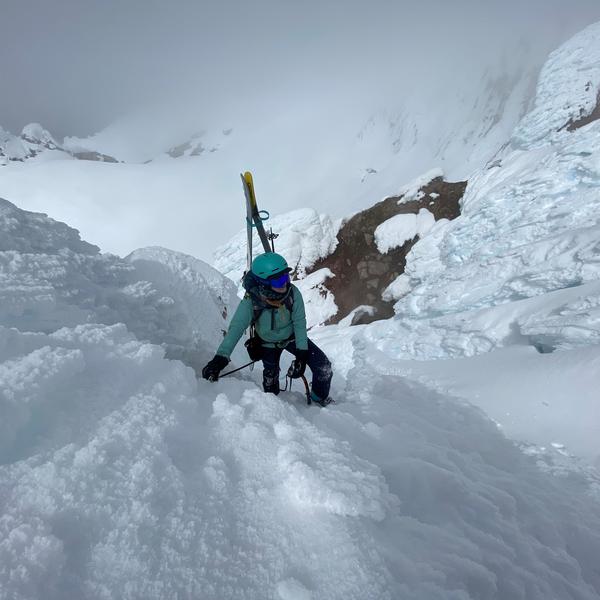 Goal: complete 4 objectives in one big day on Mt Hood!

Wednesday, March 17 called for clear skies and low winds, so Zan and I decided to embark on a journey to see new parts of Mt Hood we hadn’t explored yet. We left the parking lot at 4:15 am after sleeping in the car and skinned up the Palmer with Liz and Noah. We got to Illumination Saddle just as it was getting light, and peered over into the Reid, taking note of the chicken heads and icy spots. We decided to transition to crampons and put skis on packs for the steep and crunchy descent. The Reid was filled in with snow, but we saw a bergschrund opening up closer to Yocum Ridge. Noah and Liz left to find a route to the Sandy Headwall, while Zan and I started the ascent up Leuthold Couloir, staying far from the bergschrund. Since the mountain’s been pummeled by snow this year, the couloir was filled in nicely. 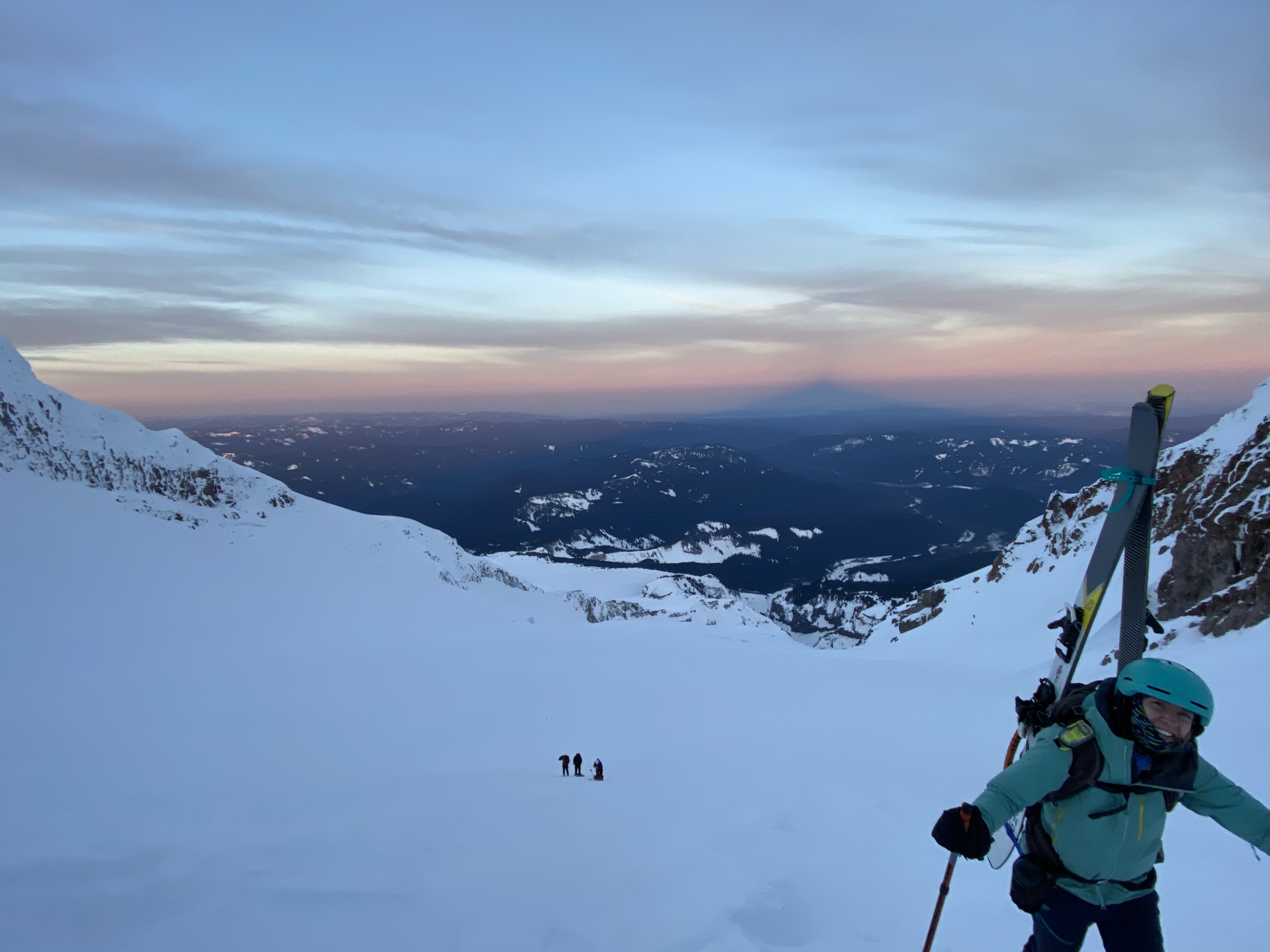 Mountain shadow below as the sun comes up

We couldn’t find a bootpack from the weekend climbers, so Zan set a solid one. He followed the more solid icy areas and avoided the sugary snow, where if we took one step, we’d slide down up to our knees. We made quick work of the couloir and navigated the hourglass with no trouble. Once past the hourglass, the apron widened and became less steep, making the Queen’s Chair seem a lot closer than it was. 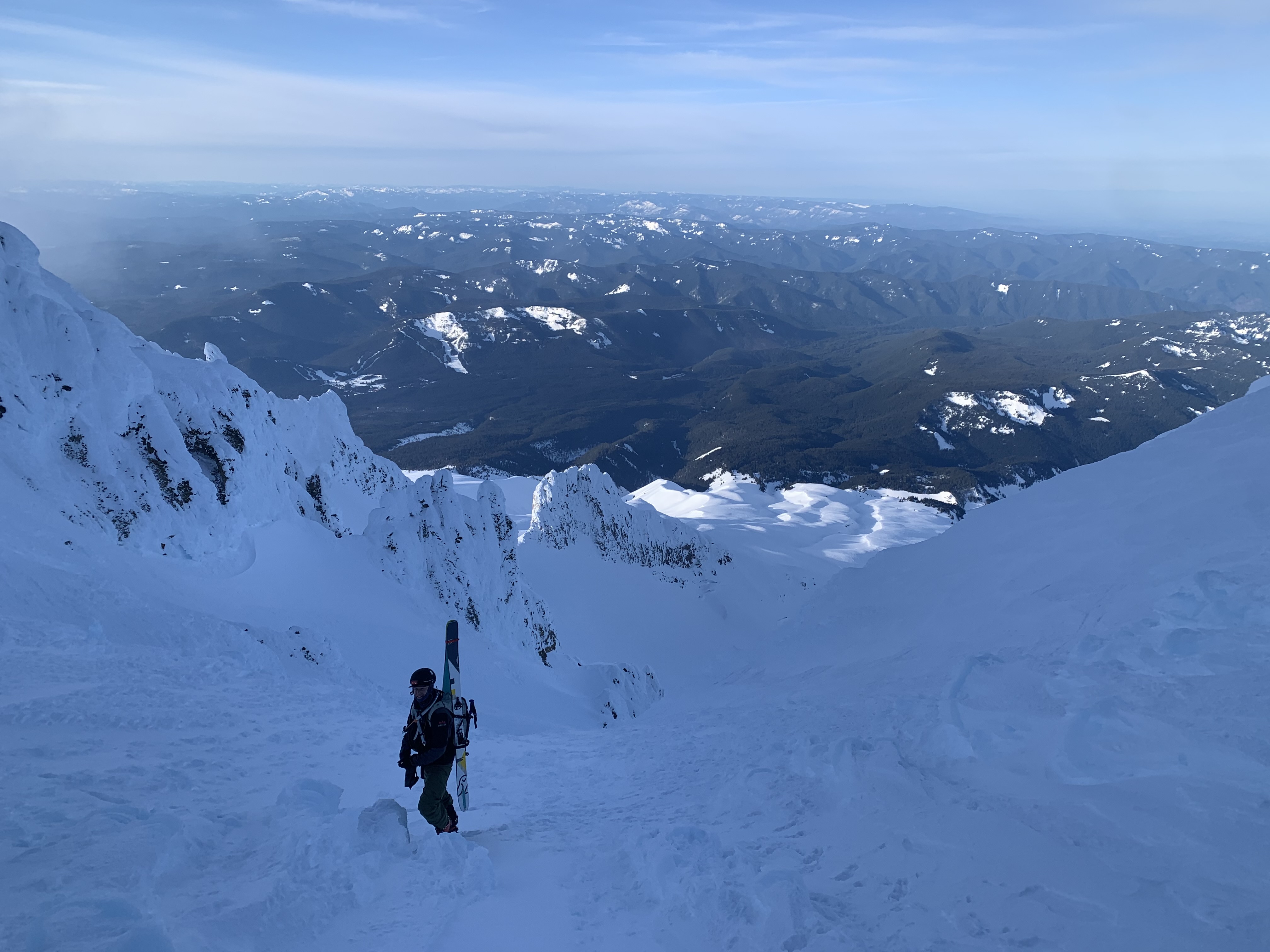 Zan looking small above the hourglass

We continued upwards, stopping for a few breaths as needed. We alternated between front pointing and stabbing the pick of our ice tools in the snow to side stepping with tools in hand for stability. We didn’t bring a rope or harnesses and felt confident in our decision. Once at the Queen’s Chair, we looked down into the Sandy Headwall which did not look in for skiing whatsoever. Very bumpy with rime ice and chickenheads, similar to what we were walking on. We found a solid bootpack up the last long pitch to the top of Old Chute and gratefully followed it, giving ourselves a respite from breaking trail. We arrived at Old Chute in about 5.5 hours and the wind was really blowing which made transitioning feel a little sketchy. I struggled to get my skis on but once they were on, we were ready to descend to the Hogsback! It’s been a goal of mine to ski Old Chute for years and I was so excited to not have to downclimb. The snow left a lot to be desired, however, and it was a careful and steady pace down to avoid slipping and falling.

We arrived at the Hogsback hours earlier than anticipated so hung out and ate burritos while we waited for the sun to warm the snow. After about an hour of wiggling around to stay warm, we donned skis again and ski traversed over to Devil’s Kitchen with the goal of climbing Variation 4. 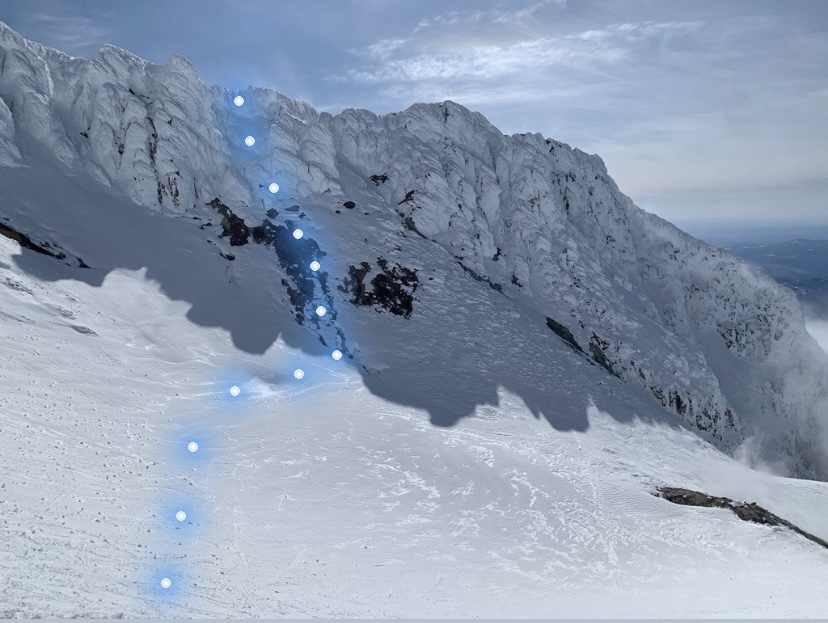 Our route up DK4

There were a lot of ice shelves with hollow areas above the fumaroles and dirt, which would make for a challenging ascent due to punching through the snow each step. We made the decision to scramble up the loose dirt and rock where we knew the ground would be firm. We reached the rime ice chute in no time, and climbed up between alien-like ice formations. 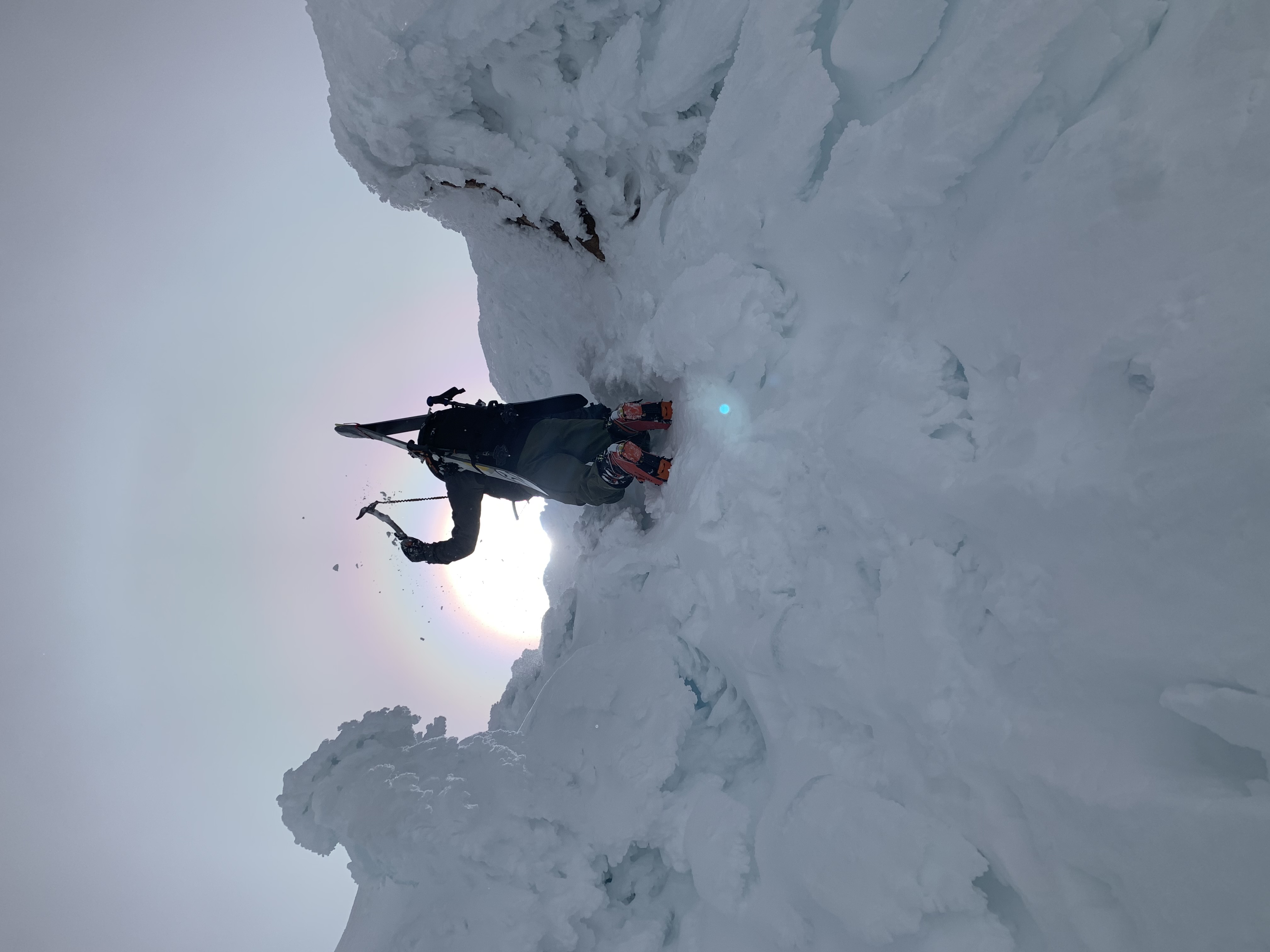 Zan flinging snow while making purchase on the ice 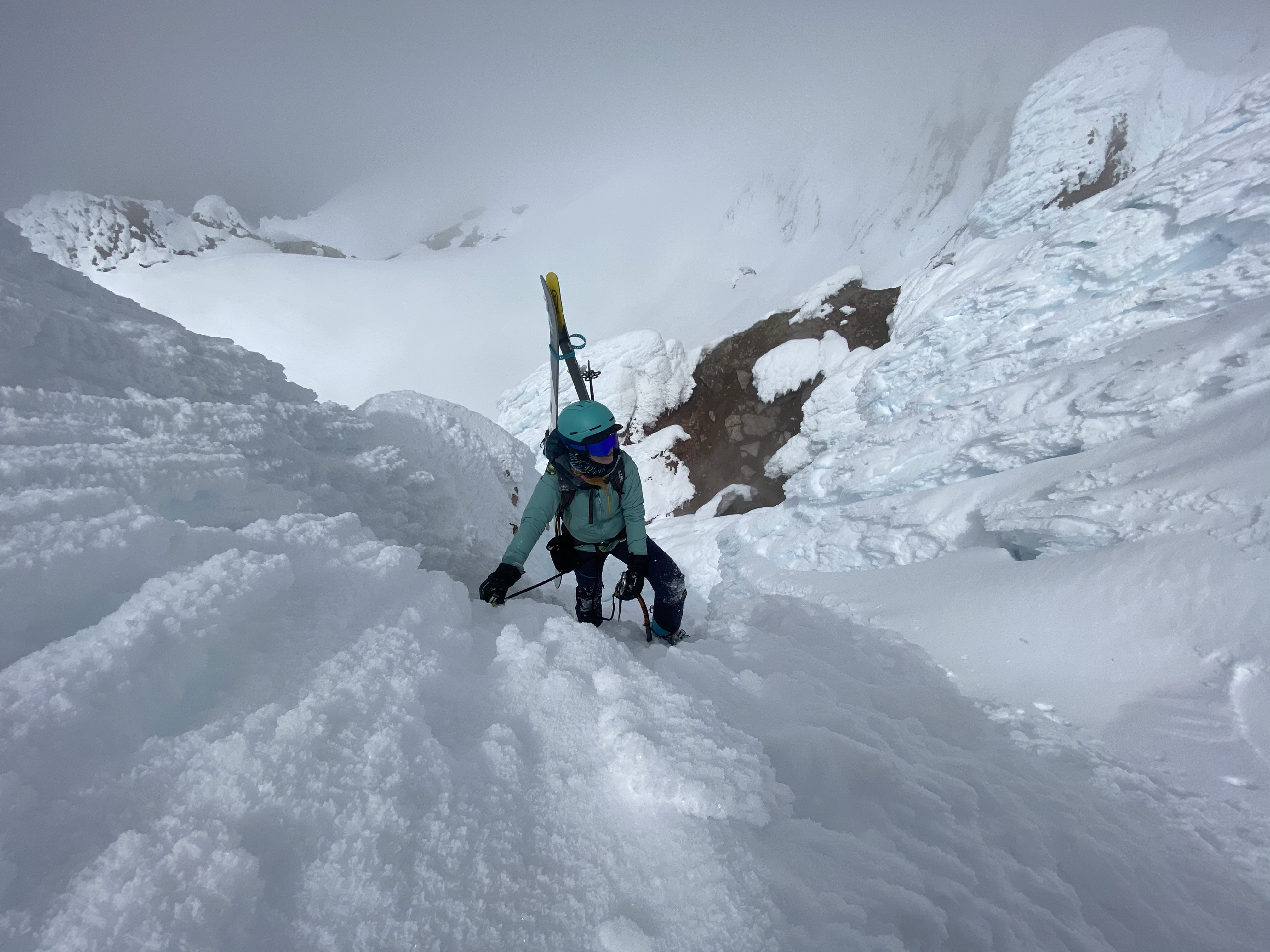 Near the top of DK4 above the inversion

It was a steady pitch and we were happy we had 2 tools. Zan and I crested the top, where there was no ice step, and felt like we were on top of the world yet again. There was a crazy inversion so we were above the clouds and in our own little slice of heaven. 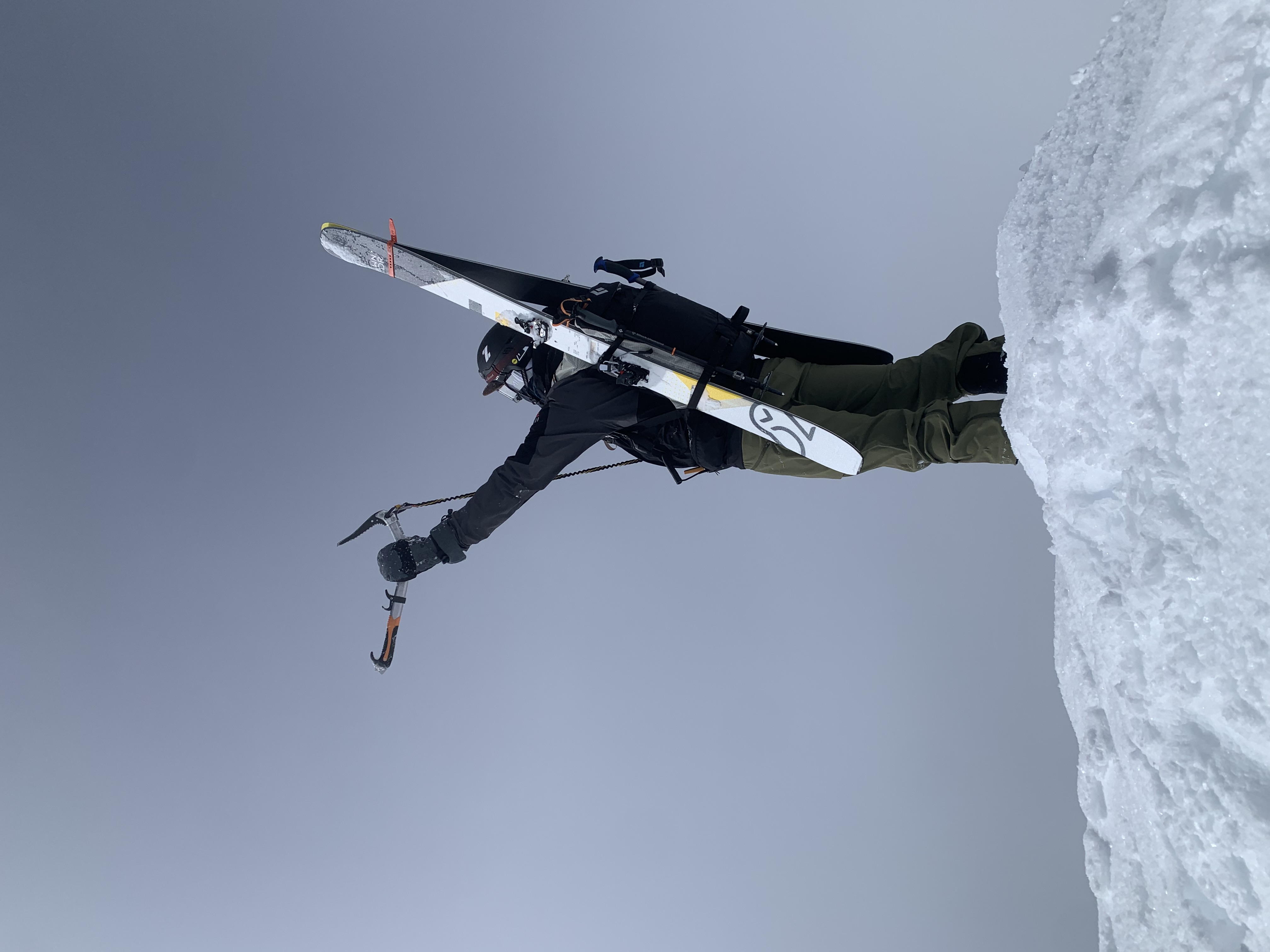 Grateful to the mountain for another wonderful day

After a quick snack and water break, we switched from crampons to skis for the final time that day and began the ridiculously long and awesome descent down the Wyeast face. 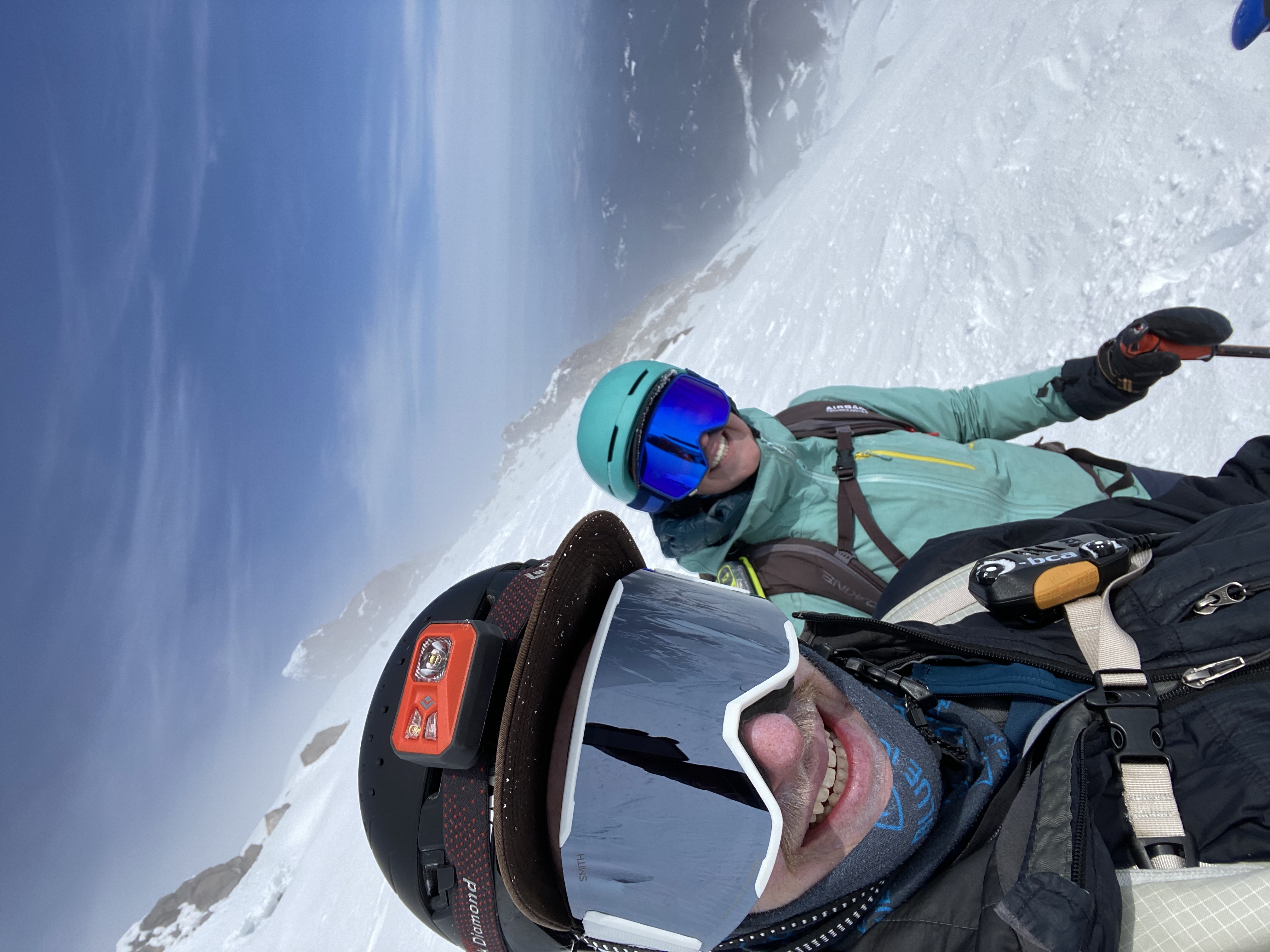 All smiles for the ski down!

The conditions were pretty ideal! Lots of styrofoam snow, some wind buff, and lower down in Superbowl and Heather Canyon, it transitioned into spring corn then spring slush.
We hooted and hollered, enjoying the ski after doing so much elevation gain throughout the morning. 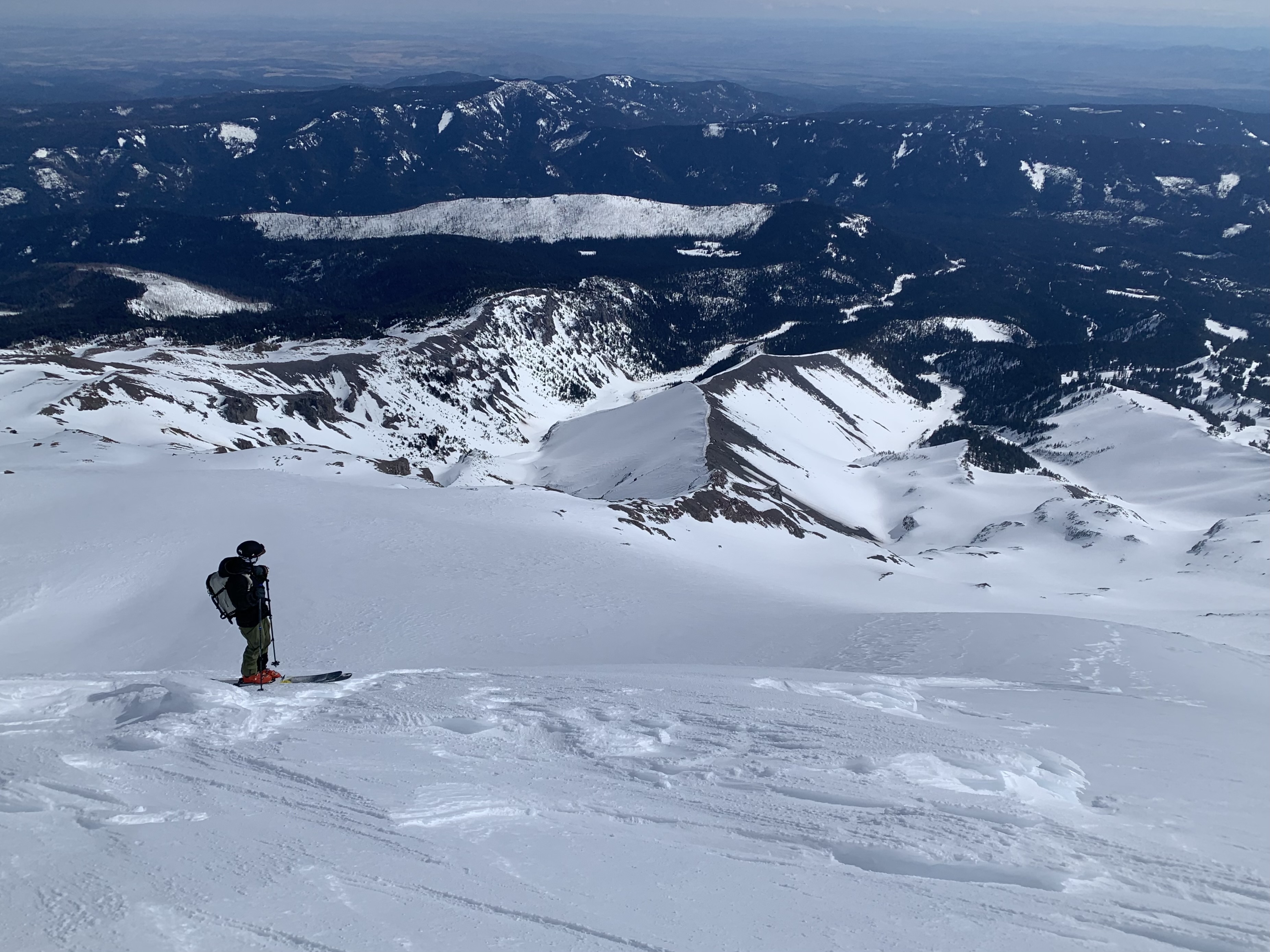 Zan soaking in the view, excited to have so many more turns after completing a ton already!

My legs were definitely fatigued but I felt strong and was excited about the second burrito and beer waiting for us at the car. We staged one car at Hood River Meadows the night before, so skied all the way to the parking lot and thoroughly enjoyed taking off our ski boots and cracking open a cold one while basking in the sun and in our accomplishment!