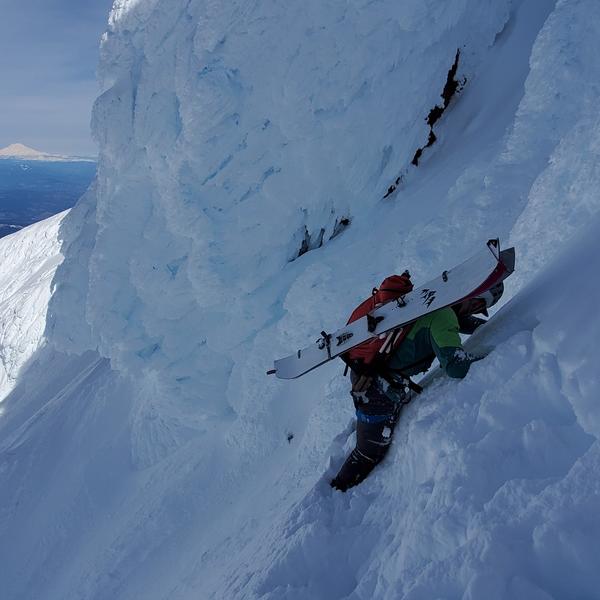 This trip report is intended to inform climbers of the current conditions on the lesser frequented aspects of the mountain, piggybacking off of the 3/1/21 PMR presentation that highlighted other routes on Mt. Hood beyond the standard route. There is a lot of route information already about the standard route as of 3/15/21, so the trip/conditions will be focused on the other aspects we climbed/skied.

Overview
We set out to do a multi route trip up Mt. Hood on Saturday, 3/13/21. Our route of travel was from Timberline up the Reid Glacier Headwall to the top of the West Crater Rim, ski down to Devil’s Kitchen, climb up the Flying Buttress route to the East Crater Rim, then ski down the Wy’East face/White River Canyon back to Timberline. This allowed us to see 2 aspects of the mountain while skiing and avoid the crowds on an inherently busy weekend.

Reid Headwall
We set out at 6:30am, skinning to Illumination Saddle. As soon as we breached Illumination Saddle approximately 2hrs later, we were cast into the shadow of the mountain where snow went from hard/icy to approximately 1-1.5ft of new/unconsolidated snow. Avalanche conditions indicated as Moderate and was well bonded to the icy layer below. Several parties had created a solid bootpack to the base of the Headwall, making travel easy and enjoyable. Crevasse/bergshrund conditions on the Reid had shown some sagging and the boot pack went around these crevasses. Working up the Reid, the main bootpack went up the 8a route in the Bill Mullee book “Mt. Hood Climber’s Guide.” The main ice pitches that the route goes through was without much hard ice, making the front point/ice tool game fairly minimal and allowed for the route to be mostly a stair step up most of the route. Protection through here would be difficult, the snow was unconsolidated and the ice below was under 1-1.5ft of snow, making pickets impossible and ice screws time consuming. If you stay on the bootpack all the way to the upper West Crater Rim, there will be minimal alpine ice climbing, expect a stair step game with the occasional short/icy section. We deviated from the bootpack in the last ¼ of the route and found a couple steeper/longer pitches of alpine ice, and luckily they did not get us cliffed out as we well expected. Setting up a bail rappel would have been annoying but doable, so be sure your alpine ice skills in exposed terrain are dialed before setting up on this route despite the (current) deeper snow conditions.

West Crater Rim
We topped out on the rim around 12:30pm at the termination of the West Crater Rim route. Skiing from here down to the Devil’s Kitchen was, well, not worth commenting on. If skiing down this, be ok side slipping 50deg ice and if going up, be ok with front pointing and preferably have 2 tools. Good climbing! Bad skiing. 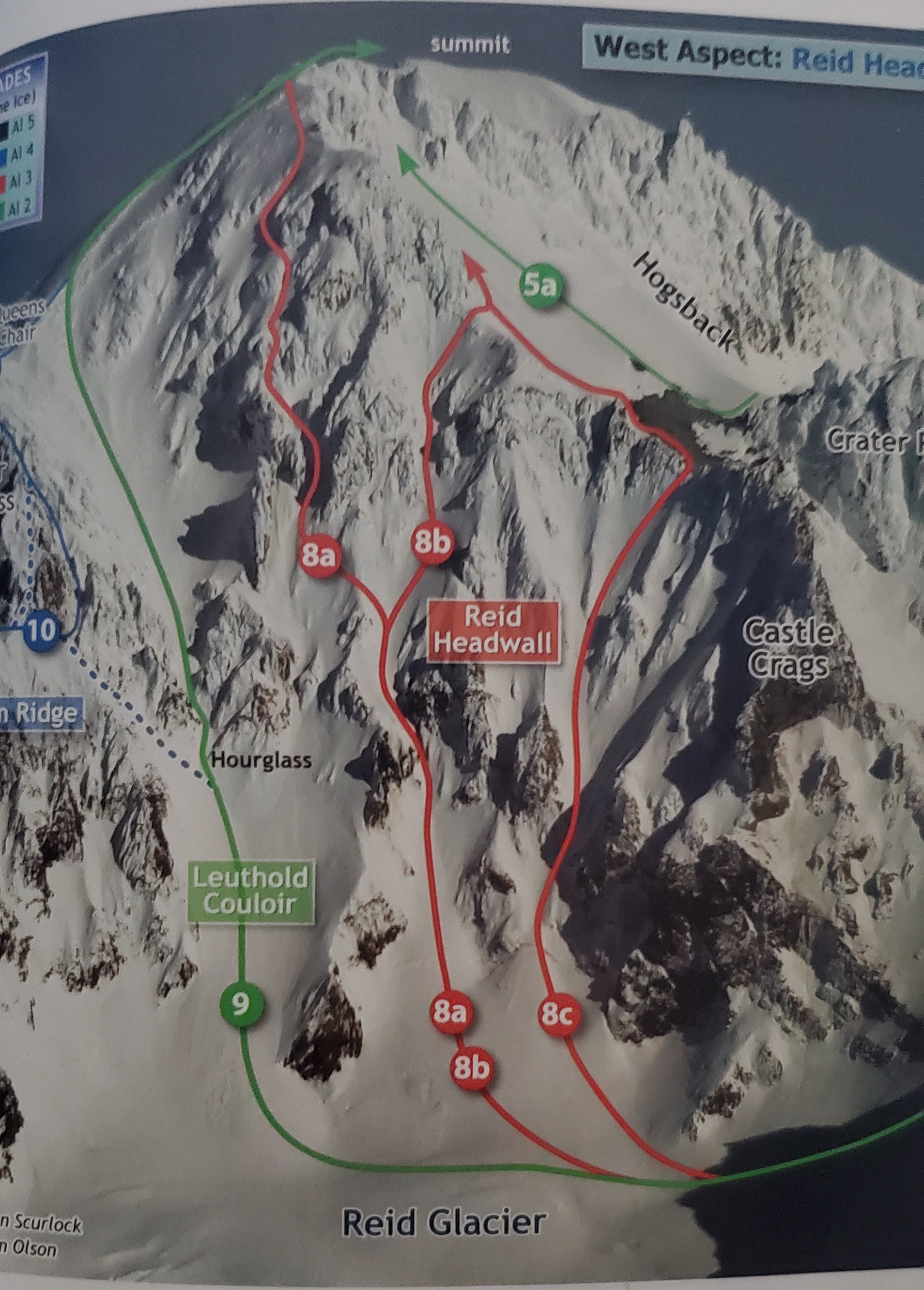 Flying Buttress
We transitioned at the base of the Flying Buttress route and followed yet another bootback. How convenient! The current conditions of Flying Buttress were very mellow, akin to going up the Pearly Gates (when it’s just a ramp) with a short, 5ft section of high stepping to crest the East Crater Rim.

Wy’East
The final transition to ski descent at 1:30pm yielded following another track. It’s like we were replicating someone else’s line. Nevertheless, we transitioned to ski and discovered we were about an hour late for a soft descent down the Wy’East face. The snow was equivalent to an overcooked brownie, crunchy on top but soft underneath. Sadly, too crunchy to get good turns down, so we side-slipped and made the occasional short turn through a good majority of the skiing. As we wrapped our way from the Wy’East face towards White River Canyon, we encountered numerous icy landmines and an icy rockband that was the crest of the White River Canyon ridge, just below the Steel Cliffs. Beyond this rockband and into the canyon yielded the soft snow we were looking for! We skied the canyon for a few hundred vertical feet before traversing out of the canyon and onto the south side. Skiing from here was incredible, soft and exactly what defines great spring skiing.

Final Comments
What we saw was the typical change in snow type as you change cardinal aspects across the mountain. Morning sun on east facing slopes yielded ice when cold and spring-like snow (corn/mashed potatoes) when warmer. Anything that was sheltered from the sun still had fresh(ish) snow that was a completely different experience, so expect a variety of snow types as you change aspects. In browsing through pictures afterwards, Micah noticed a large crown on the west side of the ridge just below Illumination Rock. It was a large slab avalanche that released onto the Reid Glacier, indicating that avalanche conditions exist on other aspects of the mountain that may not exist on the South Side. 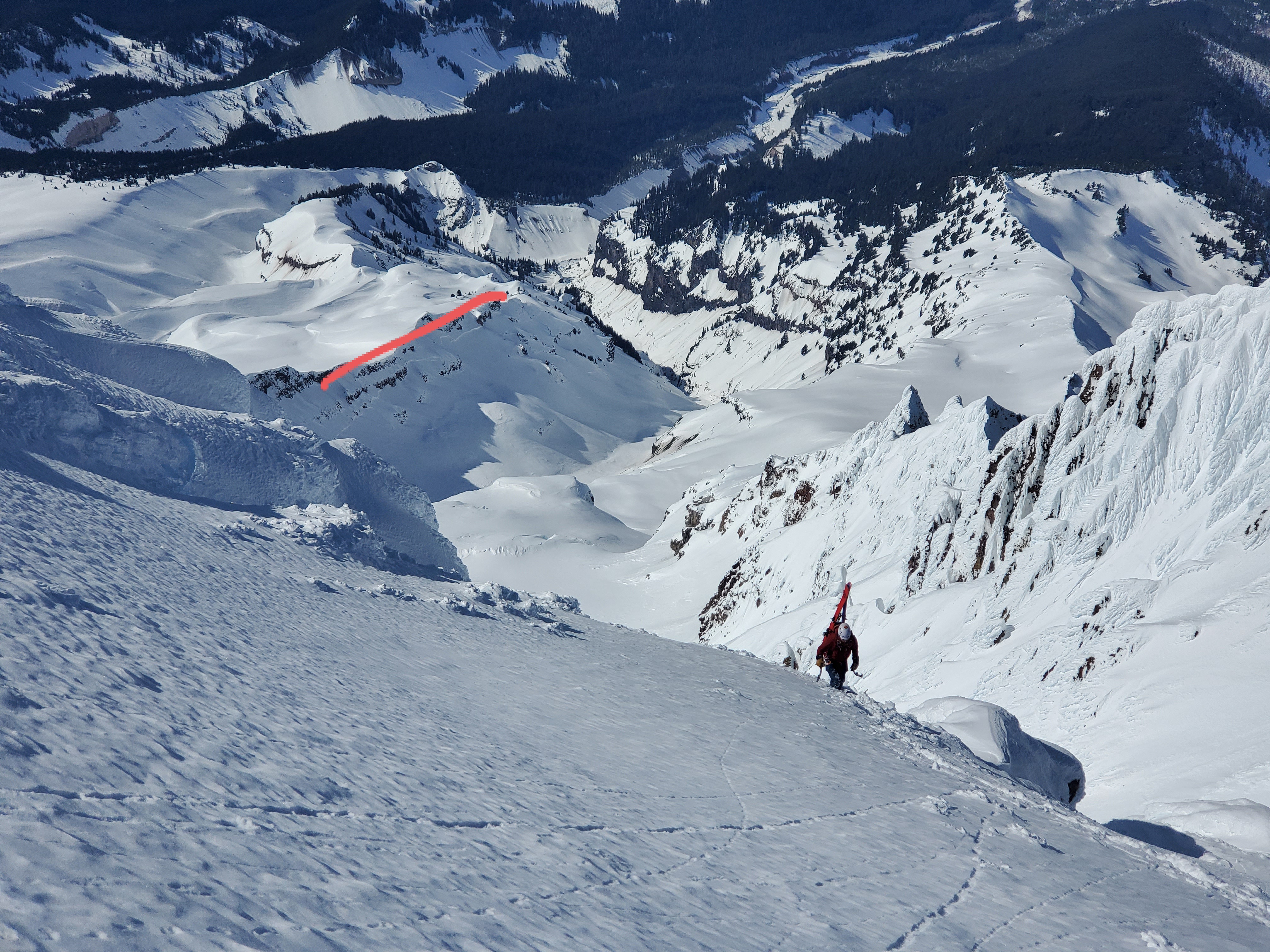 Fumaroles/bergschrunds were surprisingly open for March and the amount of snow present. Fumaroles across the Hot Rocks were open, bergschrund below Pearly Gates had about a 5ft gap, Devil’s Kitchen fumaroles were barely visible, and the hot lump of rock below the East Crater Wall route was completely bare (also atypical). Be mindful of thin bridges across these features as more snow comes down later in the week and give a wide berth around any sagging areas in the Crater.

Lastly, a final thanks to Andy Traylor and Kyle Tarry for setting a great bootpack; a bootpack we didn’t know was theirs and that we were mimicking routes to the other. It all made sense when their Instagram story looked remarkably like where we had also been that day.