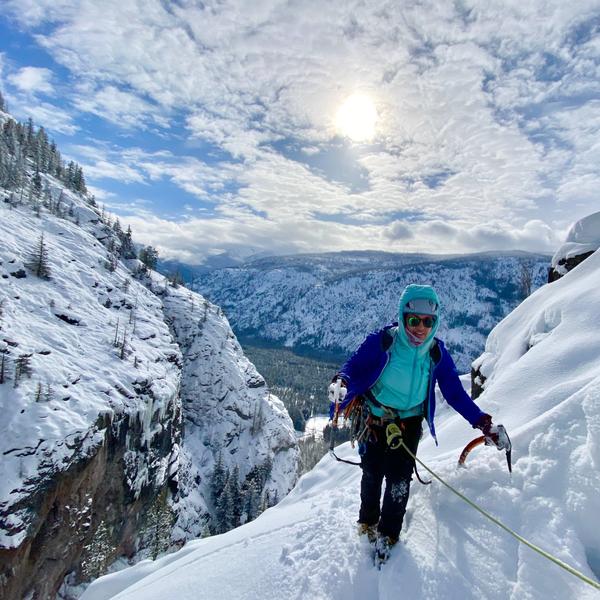 Pre-Trip
After cancelling my ice climbing trip to Bozeman, Montana twice due to COVID, I was starting to feel kind of hopeless about getting a chance to improve in the sport following a less than ideal introduction earlier in 2020. Then, in early December, I saw an Instagram post by Mountain Bureau about ice climbing courses they would be offering in Washington state! I immediately reached out with a request to be notified when conditions were suitable enough to book a course. Although those ideal conditions didn’t happen right away, I finally received that long awaited email the first week in February and booked a two-day course for the following weekend.

The day before we left, we woke up to snow in Portland. Although we’d been following the forecast, I’d kept my fingers crossed that maybe it would be on the lesser side. Still set on going, we stopped by Mountain Shop to rent gear for our trip: a pair of Petzl Nomics and Cassin X-All Mountain tools, as well as some Grivel G14 crampons. The drive back to our house went smoothly, but while teaching from home, I watched throughout the day as the snowfall intensified. We were going to be in for an interesting drive to the North Cascades.

Day 1
After Mack and I finished teaching Friday night, we quickly packed up my car (including plenty of emergency gear should we get stranded in the storm), threw AutoSocks onto the tires just to be safe, and hit the road. Although we’ve driven in snow plenty of times, we’ve never driven 400+ miles of it in a single push. Literally the only “dry” section we hit was a few short miles on Stevens Pass Highway. Our 7.5 hour trip turned into 12 hours of white-knuckle driving. We arrived about a half hour before our planned meet-up time after a long, sleepless night on the road. Nonetheless, we were happy to have made it safely and excited to finally do some climbing.

Mark Allen is an IFMGA guide, owner of Winthrop-based Mountain Bureau LLC, a resident ice climber in the Methow Valley for more than two decades, and a nominee of the Piolet d’Or back in 2014. He was also our guide for the weekend. Nerves and intimidation about meeting him wore off quickly though. He was friendly and approachable from the first greeting, putting two new ice climbers at ease before we even started the approach hike. Following a brief gear check and a rundown of the current conditions and itinerary for the day, we made the short drive to the “trailhead,” strapped on crampons, and began the ascent to the rock wall high above the road. After weaving our way through the trees down lower, we carefully navigated snow covered avalanche debris from the previous cycle. Mark pointed out various ice climbs as we continued up and shared more about the history of ice climbing in the area and routes he and others were working on developing further. Water ice is such a fascinating climbing medium. Sometimes it’s daggers seemingly suspended in air hanging off cliff sides. Sometimes it’s a thick blanket coating a large swath of rock. Sometimes it’s a towering pillar literally frozen in time. It was fun to see ice in so many shapes and forms along the way to our climbs for the day.

We stopped at the base of a protruding rock formation with a variety of ice flows. Mark put up two ropes that would give us the ability to climb three different routes ranging from WI3+ to WI4. Mack went first, starting on the easiest of the three. I belayed while Mark talked Mack through some fundamentals of the tripod stance: look for good foot placements before swinging your tool, aim for pockets and depressions in the ice to swing into, focus on the wrist flick at the end of your swing, toes up and heels down before kicking in, center yourself with your tool and watch your feet to get them on the same horizontal plane, stand up and bring your hips into the ice, repeat the process with the other tool. It was Mack’s first time ever climbing vertical ice. Although he didn’t quite trust his crampons enough to get solid foot placements, he was getting good sticks with his swings and still made it to the top with very few breaks. It was a fairly tall route for his first ice climb and he’d completed it without breaking a sweat! 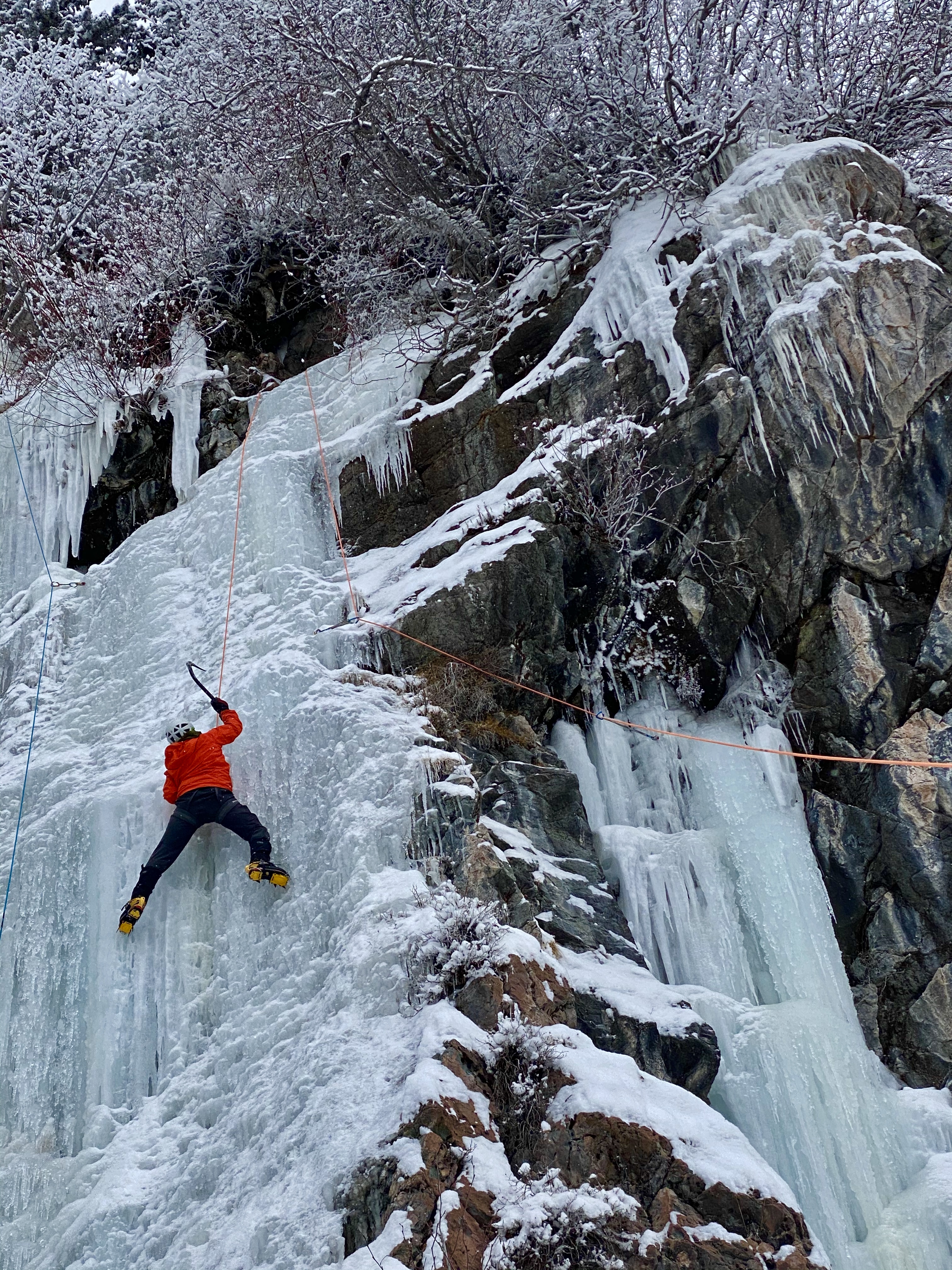 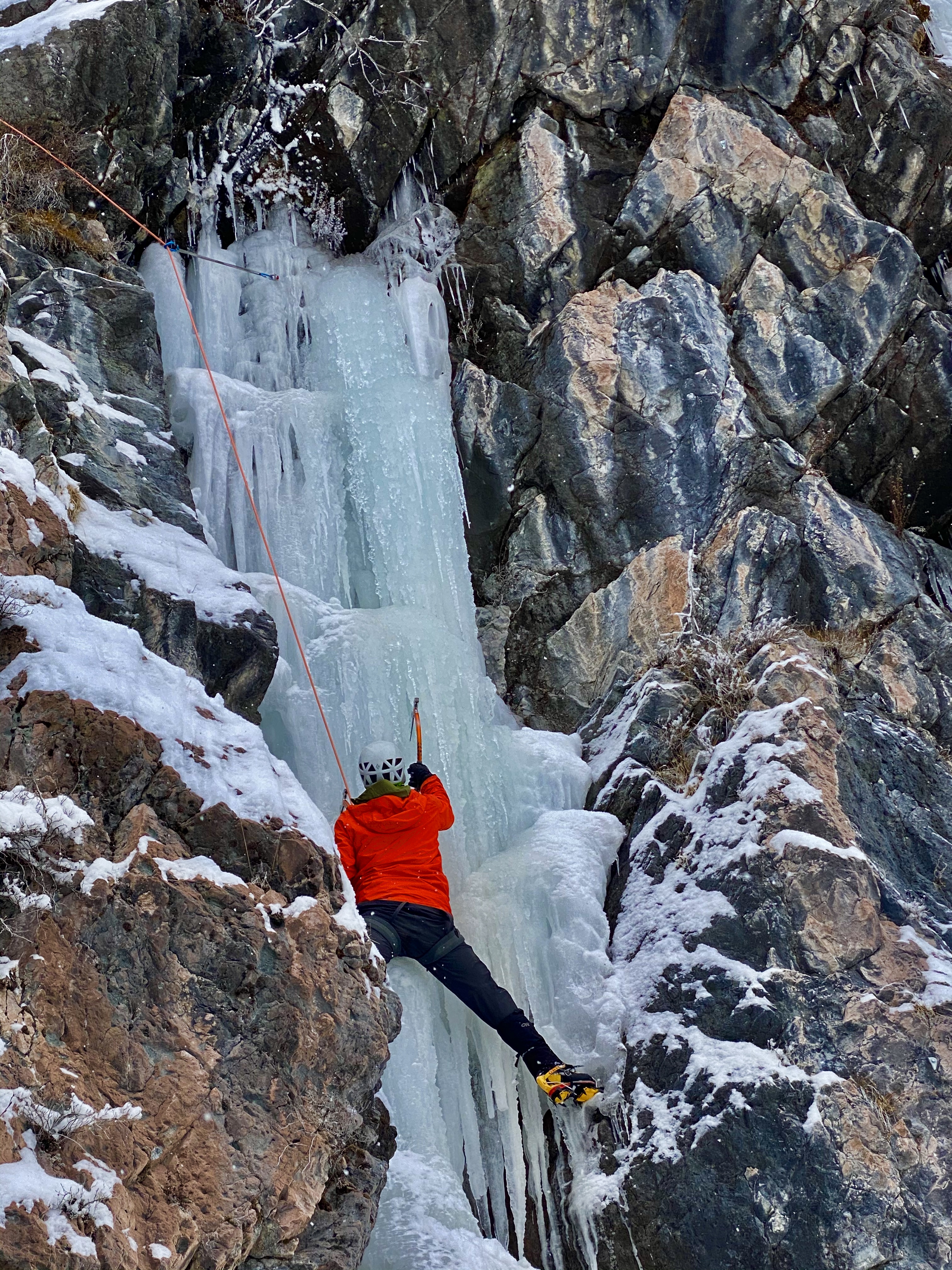 Now it was my turn. Mark talked me through the movement sequence at the base and then I was off. I repeated each step of the process aloud to myself, focusing on each movement, especially my foot placements and the wrist flick in my swing, and studying the various features in the ice to help with good sticks and good feet. It was physically demanding since I hadn’t done any ice climbing in 11 months and hadn’t been shown proper, efficient technique when I was introduced to it, but the repetitive nature felt very meditative. I took a few breaks near the top when my arms got tired, but I was elated to finish that first route and have a little more confidence in my technique. The second route we climbed was slightly more difficult, but I felt far more efficient and managed to finish with fewer breaks than the first route. Foot placements felt more solid overall, and I was getting better sticks within the first or second swing. The final route of the day was the most difficult and the most awkward in terms of movement. Neither of us made it up the full route, but it was fun to be challenged and have the opportunity to work through different problems while still utilizing the fundamentals we’d learned. 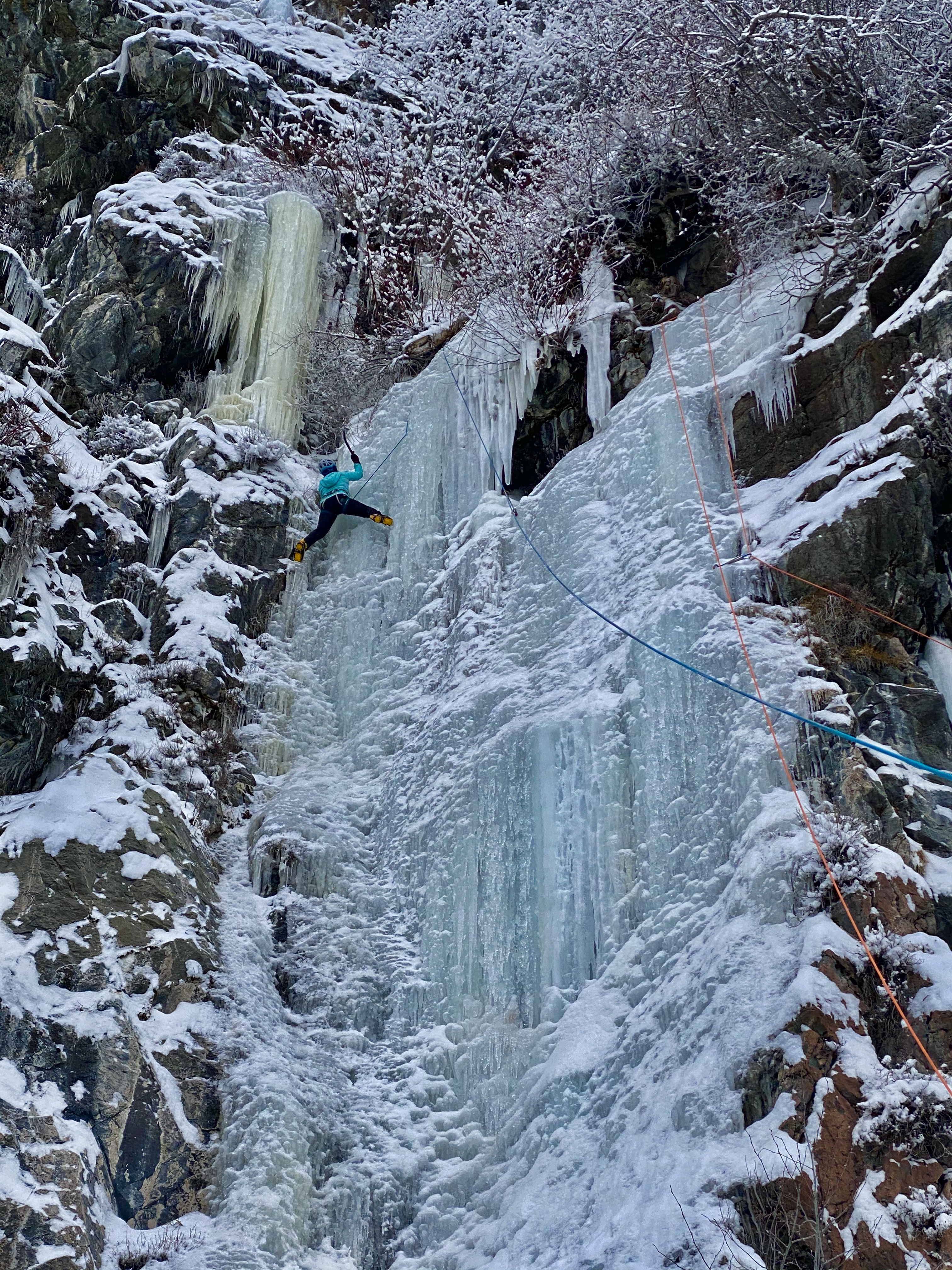 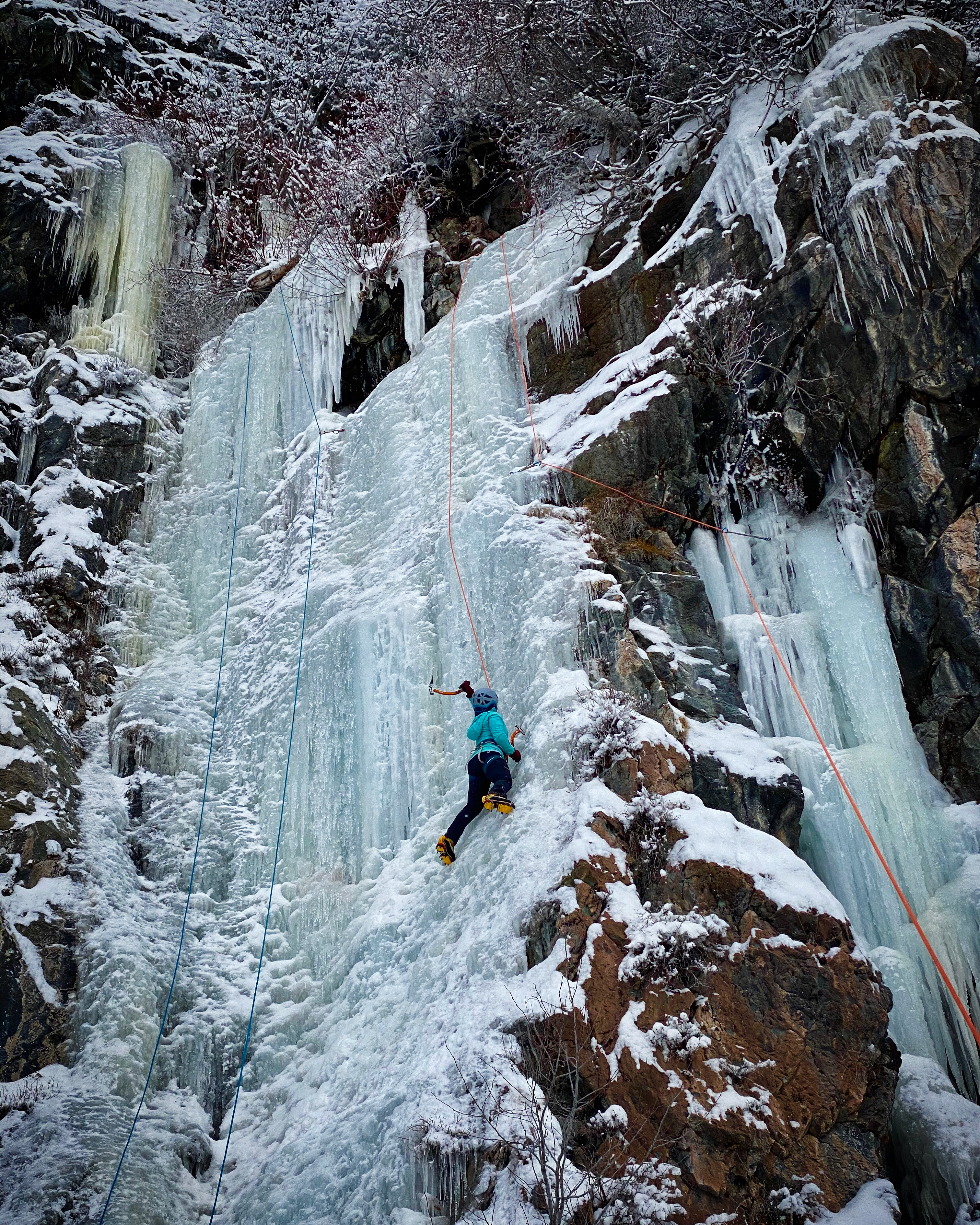 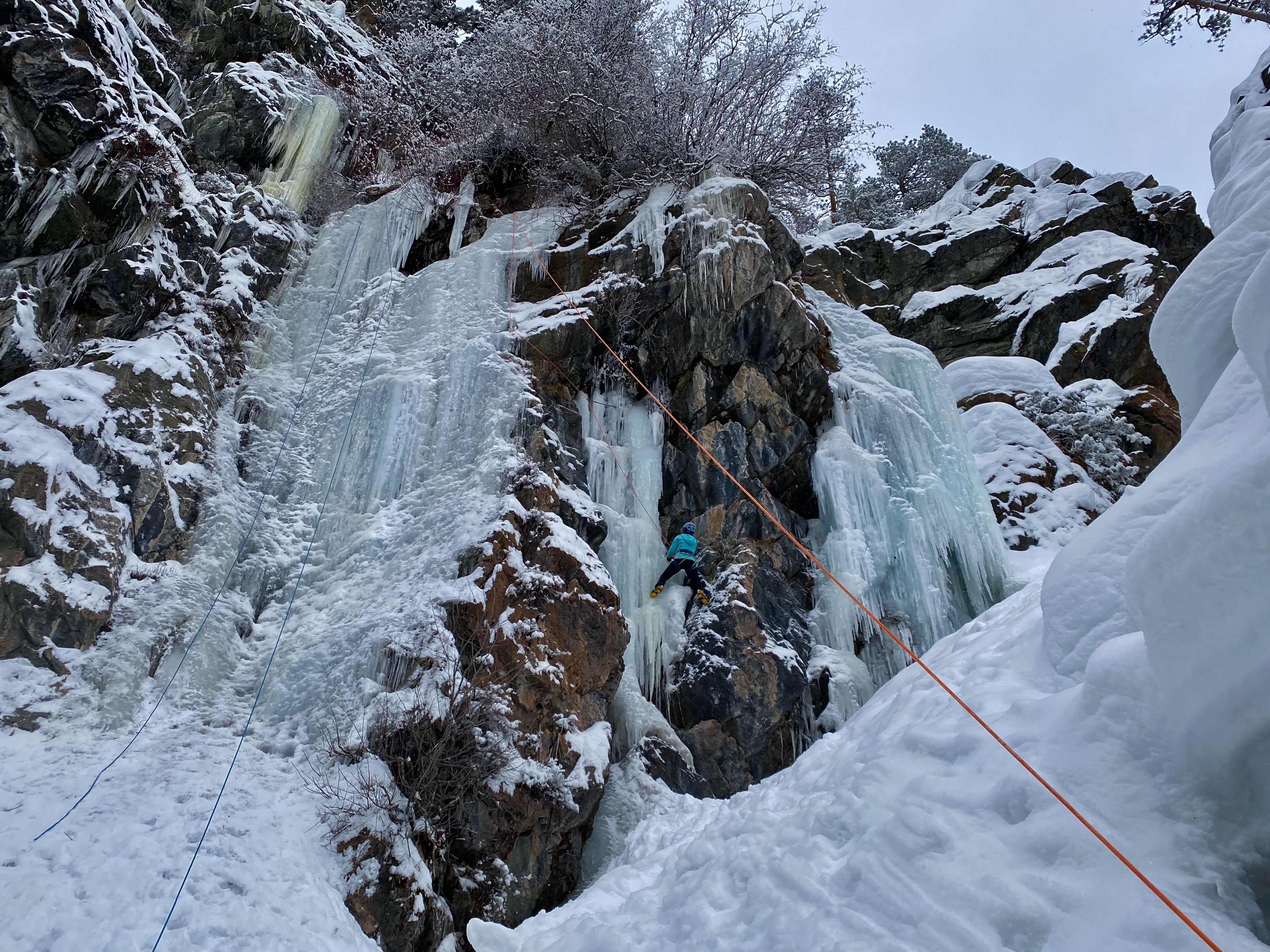 We descended back to the cars with headlamps. I couldn’t believe how quickly the day had flown by. Part of me wished there had been a little more daylight to safely stay out longer and climb more, but the other part of me, the part that hadn’t slept since Thursday night, was grateful to be heading back into town to collapse into a warm bed. Since we weren’t driving all the way from Portland for our second day, we agreed on an earlier meet up time. Day two was going to be a multi-pitch day.

Day 2
As ecstatic as we were to climb the next morning, it was difficult to drag ourselves out of bed. At least this time we only had to drive a mere 20 minutes to meet Mark at 7 am. After another quick rundown of the plan for the day, we got back in the car and followed Mark down the road. Light snow was falling as we started the approach, but we could see some blue sky peeking out behind the clouds. The hike to this climb seemed to go by a lot quicker than the first day. Maybe I was just more awake and well rested, but overall it felt easier. Although we had parked fairly close to where we’d parked the day before, this area looked totally different. Everything felt far more expansive and we were all just tiny dots against the backdrop of these massively tall rock walls. Mark pointed out a couple of mixed lines he was working on and when we looked closely enough we could faintly see fixed rope in a couple of spots.

We paralleled the creek until we reached a partially frozen waterfall that poured into a small pool. This was the start of our climb. Knowing we’d likely be up there at least 3-4 hours, if not more, we took time to eat and hydrate while we racked up. I shoved a few extra snacks into my pockets to enjoy on the climb, too. Mark carefully led up the thin veneer of ice, the waterfall rushing noisily behind it. In a couple of spots, the ice would cave as soon as he moved his foot, leaving gaping holes. Mack was not particularly excited to follow this pitch. Once on belay, he hesitantly followed the same line Mark had taken while making an effort to avoid the spots where the holes had formed. Ice continued to break away whenever he moved from a certain spot, so Mark had him clean the screw near the top of the vertical section so the rope was no longer redirected to climber’s left and I would be able to attempt climber’s right, away from the disintegrating waterfall.

I’m not sure the alternate route I took up was any easier. The ice did not seem well bonded to the rock, so before starting up, I took a swing at it and a large 3-foot dinner plate slid right off. I started with my left side on thin, fragile ice and my right side on rock, trying to balance my crampon points on the divots in the rock. I managed to get into my tripod stance, but on my next swing, another large section of ice dinner-plated, falling directly onto my right knee and throwing me off balance. I weighted the rope until the pain subsided, recovered the ground that I’d lost when I was thrown off balance, then resumed that fundamental sequence until I made it over the vertical section and could crawl the last few feet to the belay. That first pitch ended up being the most demanding due to its conditions, so it was nice to have it out of the way. 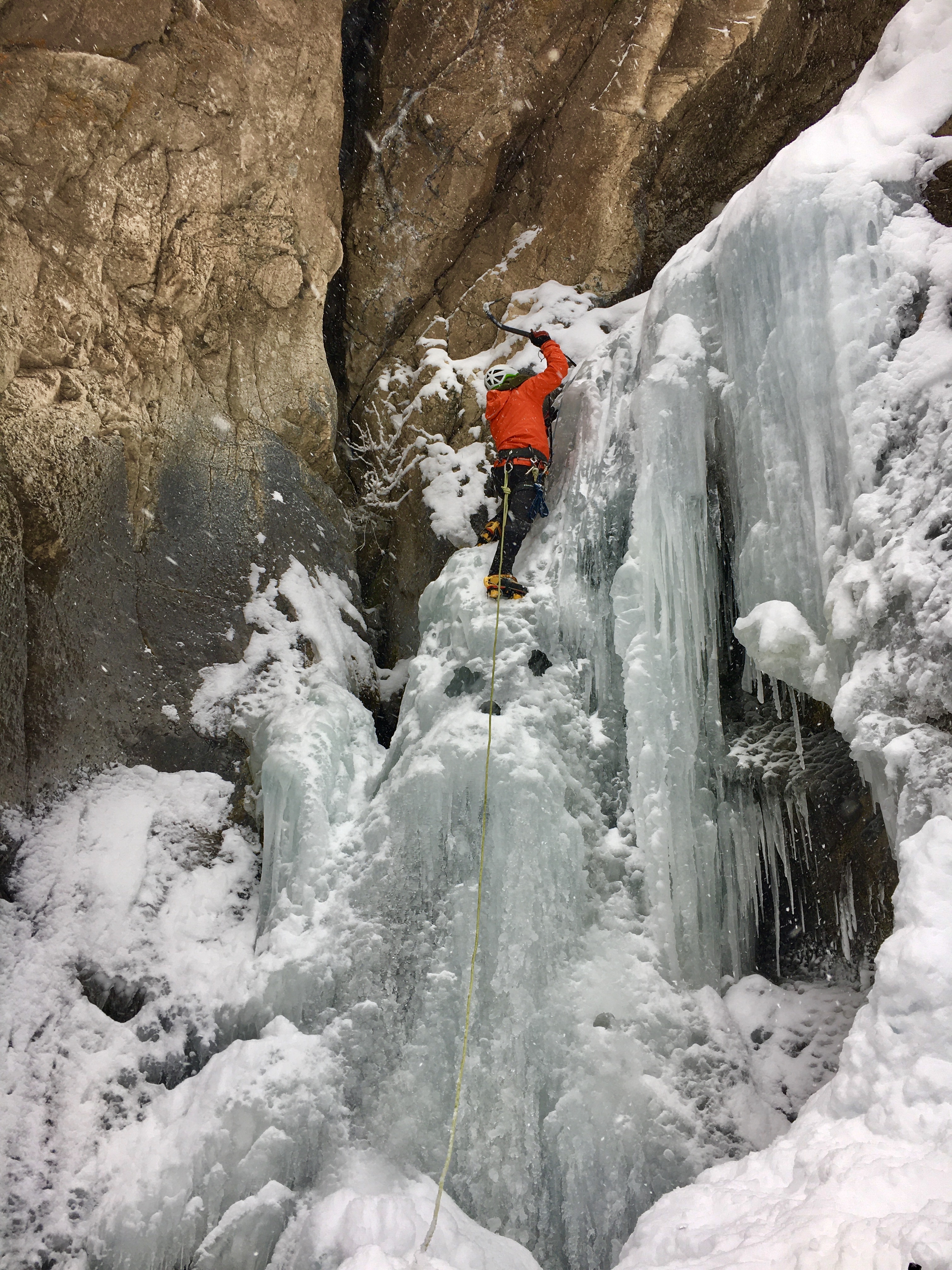 Mark moved the belay up the creek to the base of the second pitch, which was in far more ideal condition than the first dinner-plating pitch. We were finally out of the shade and able to enjoy the warmth of the sun for the first time all weekend, too! Mack flew up the pitch, moving more confidently than he had all weekend. After struggling up the first pitch, this one felt like a breeze and we were both actually able to focus on the techniques we’d practiced the day before. Once anchored in, I got a glimpse of pitch three in the distance. Multiple tiers of frozen daggers spread across like a curtain, shielding the rock it clung to. The soft piles of untouched marshmallow powder leading to the base only added to its aesthetic. 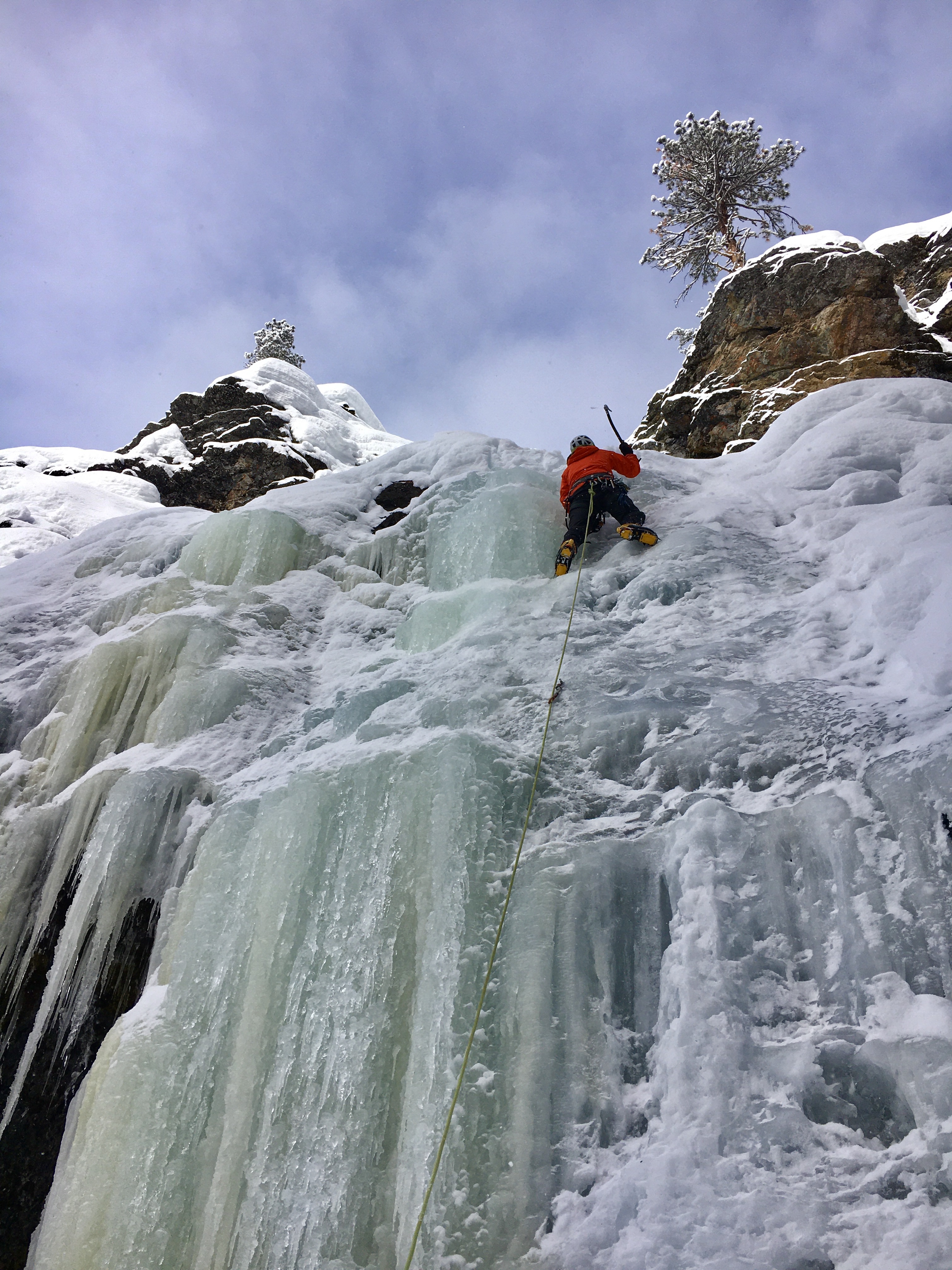 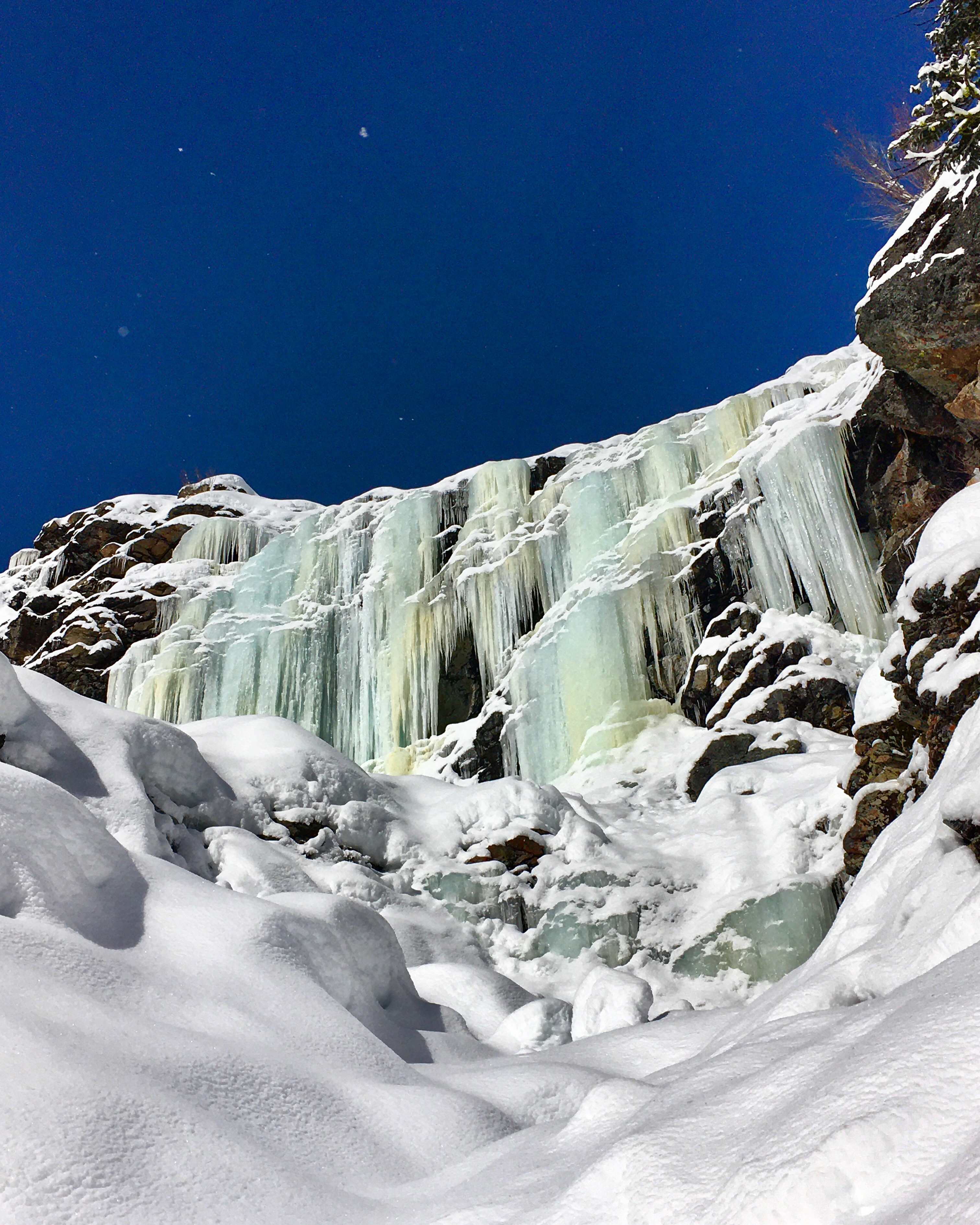 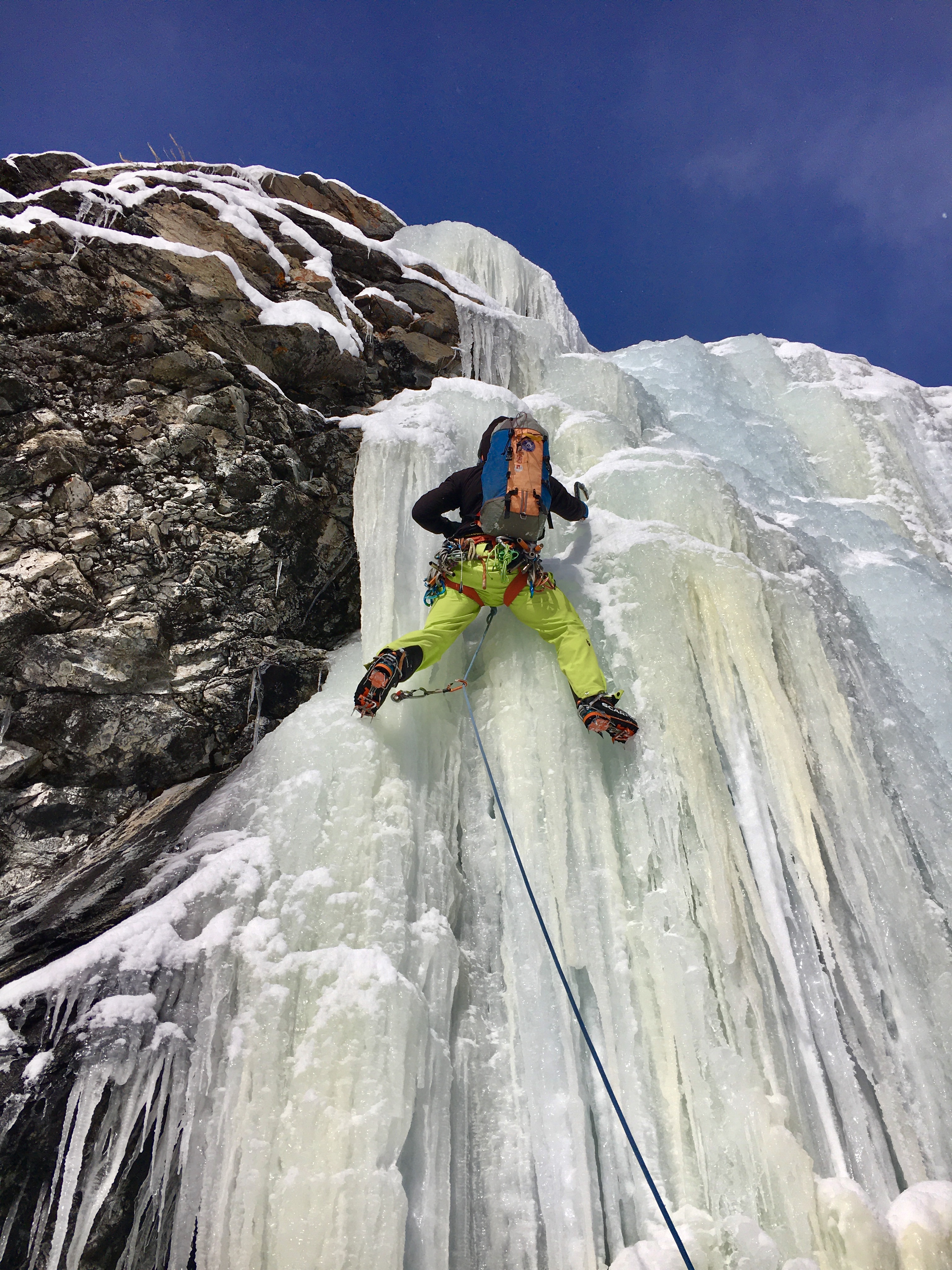 We wallowed over to climber’s left, opting for a relatively short but “sporty” (as Mark put it) line to the top. Out of all the ice we’d climbed that weekend, this particular pitch was the best for honing in on footwork, especially since it had a more vertical start before easing a bit at the top. Despite the crux at the beginning, it still ended up being the fastest pitch of the day for both of us and we enjoyed a clear view of the valley below and snow-covered hills and cliffsides around us from the top. The sun and blue sky was also making me feel hopeful about beating the incoming storm on our drive back to Portland that night. We made three long rappels back to our packs and postholed down to the cars. Just like the day before, we didn’t cross paths with another climber/hiker/skier the entire time we were out there. Although we had enrolled in an “Ice Cragging” course, the entire experience (especially the multi-pitch route) felt more akin to a weekend spent in the alpine, away from all the noise on the slopes of my favorite mountain range. 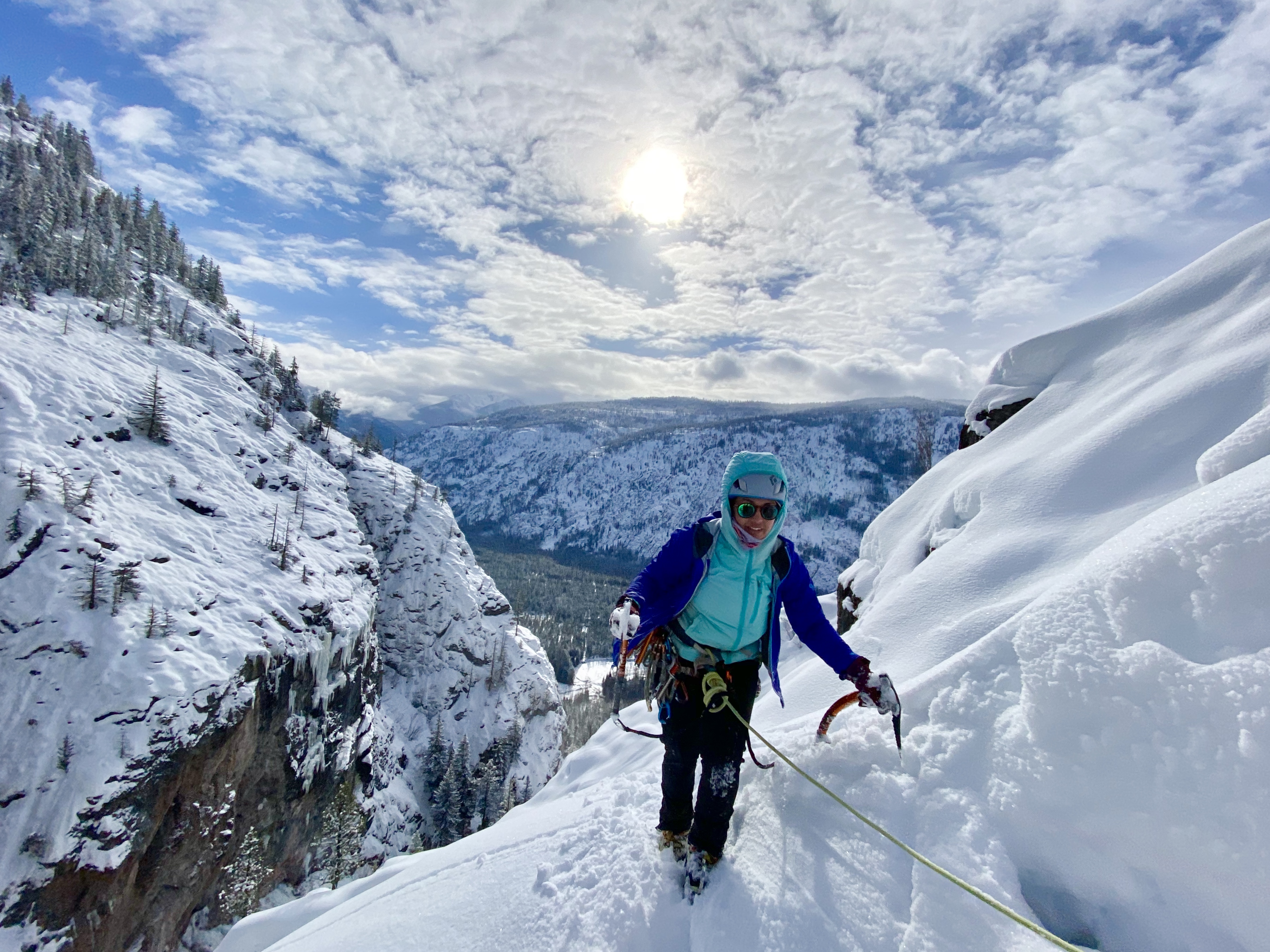 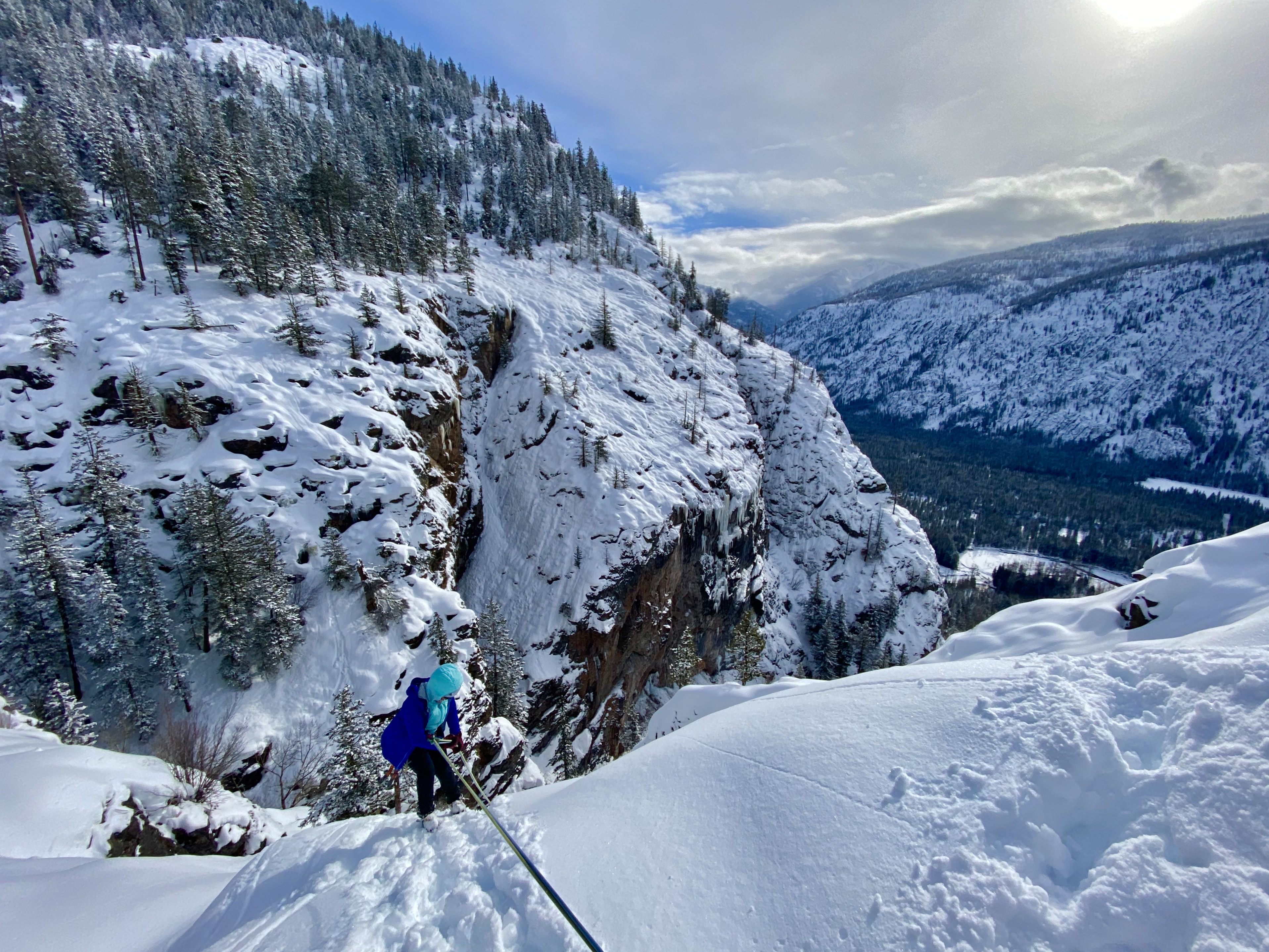 Many thanks to Mark for all his fantastic instruction over those two days! Both of us walked away feeling more confident in our skills and ability to progress with more practice and experience. Getting to see a different side (and season) of the North Cascades made the course all the more worthwhile. You can view and inquire about ice climbing and other climbing, skiing, or alpine-related courses offered by Mountain Bureau LLC here!