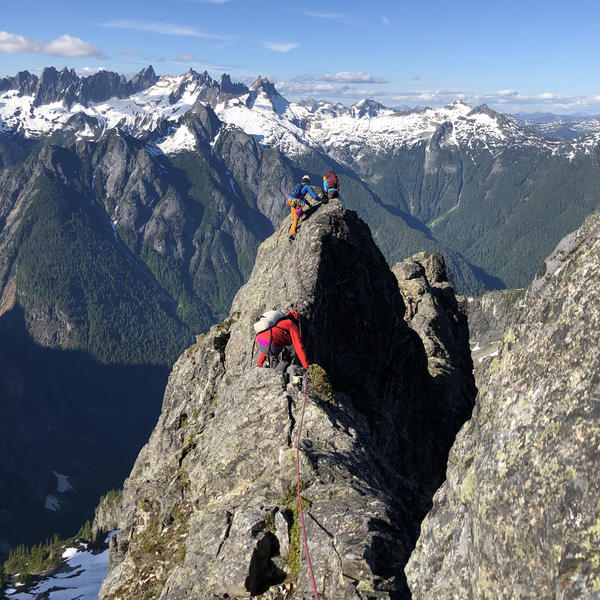 Back in February, I emailed Nancy, Kari, and Karen a list of Cascade climbs to consider for the summer. But as the months went by and COVID-19 numbers increased, a summer climbing trip started to feel harder to pull off. We wanted to climb, so decided to choose something moderate that could be done ‘off the couch,’ so chose the NE Ridge of Mt Triumph. Preston and Chris joined in and soon there were six of us excited to get out and climb.

But as we all knew, climbing ‘off the couch’ in the North Cascades can still be a lot of work! There was some bushwhacking, criss-crossing steep slopes of heather, walking across floating logs in crampons, and route-finding challenges… and that was just Day 1. 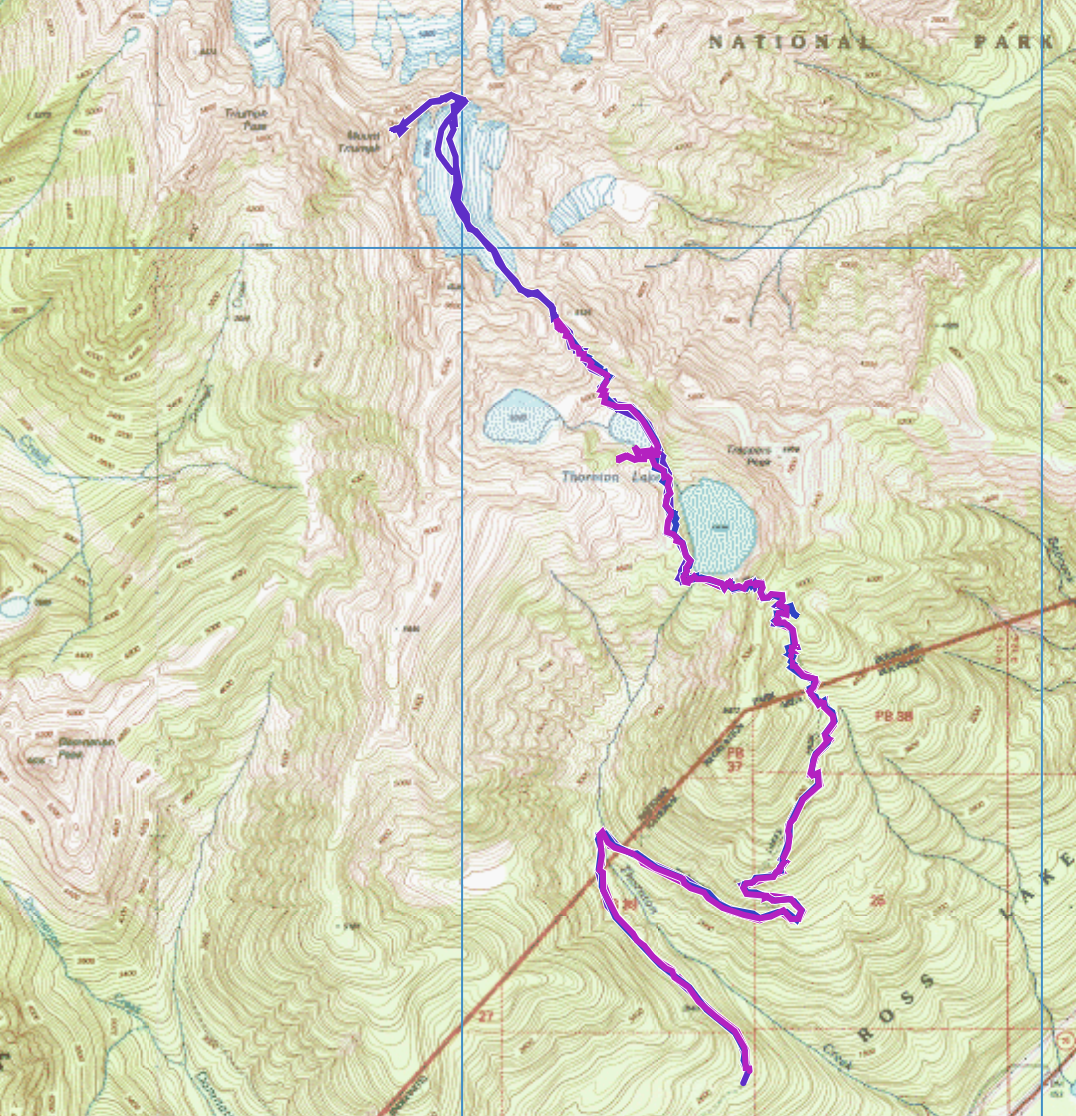 DAY 1: Thornton Lakes Trailhead (2,700 ft) Col (5,700 ft)
The first part of the trip is a straightforward 5.3 mile (2,200 ft) hike from the trailhead to Thornton Lake. From lower Thornton Lake, it is a 1½ miles to the Col, but as another trip report put it, “it feels like 3 miles.” And it does. You follow a vague climber’s trail—that is really easy to lose in the snow—on the left (west) side of the lake, which then leads to the next lake (Middle Thornton lake). Though it was late July, the middle lake was mostly covered in ice. Our first delicate moves were walking across the loose logs in crampons at the outlet of the lake. 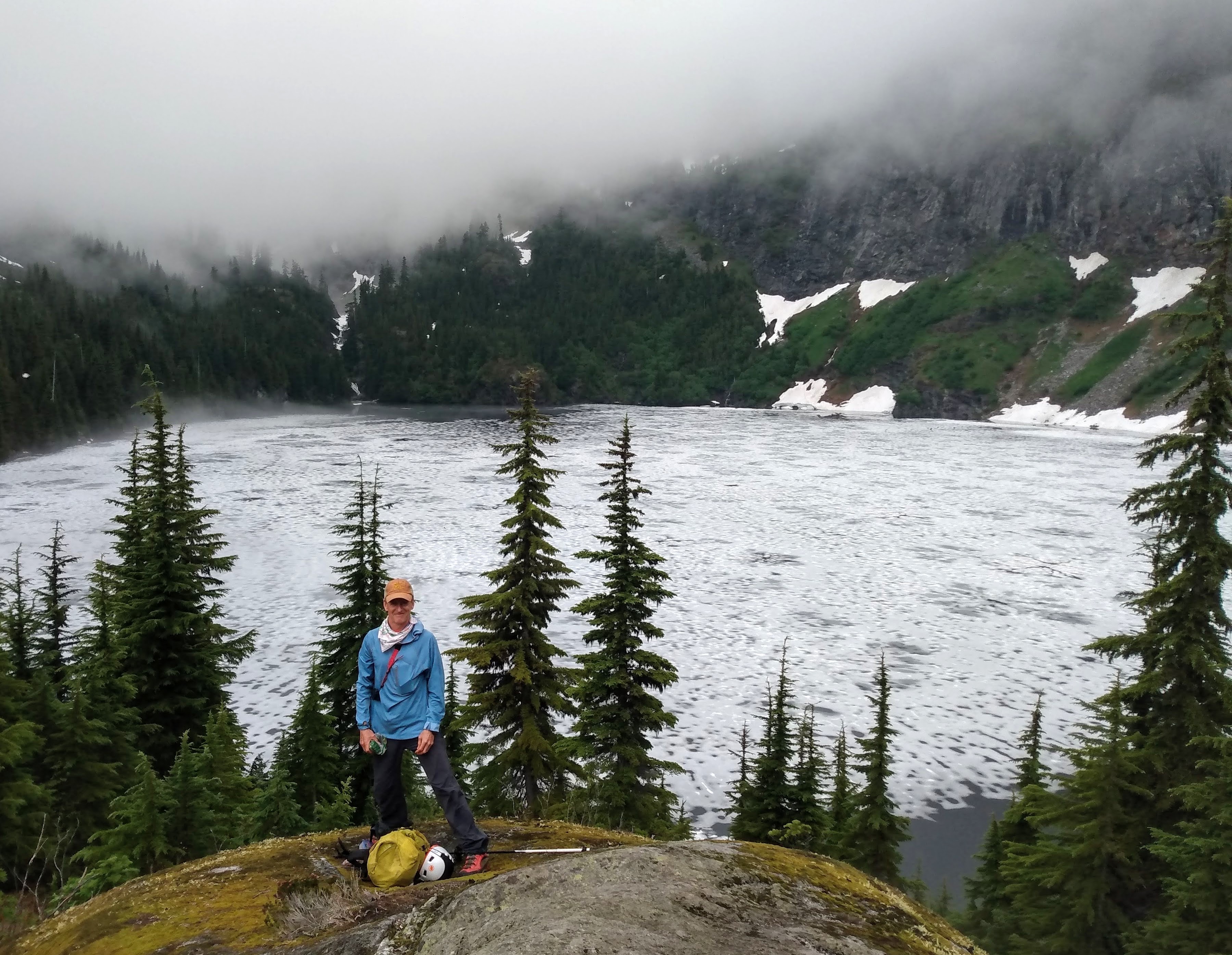 Chris at the lake 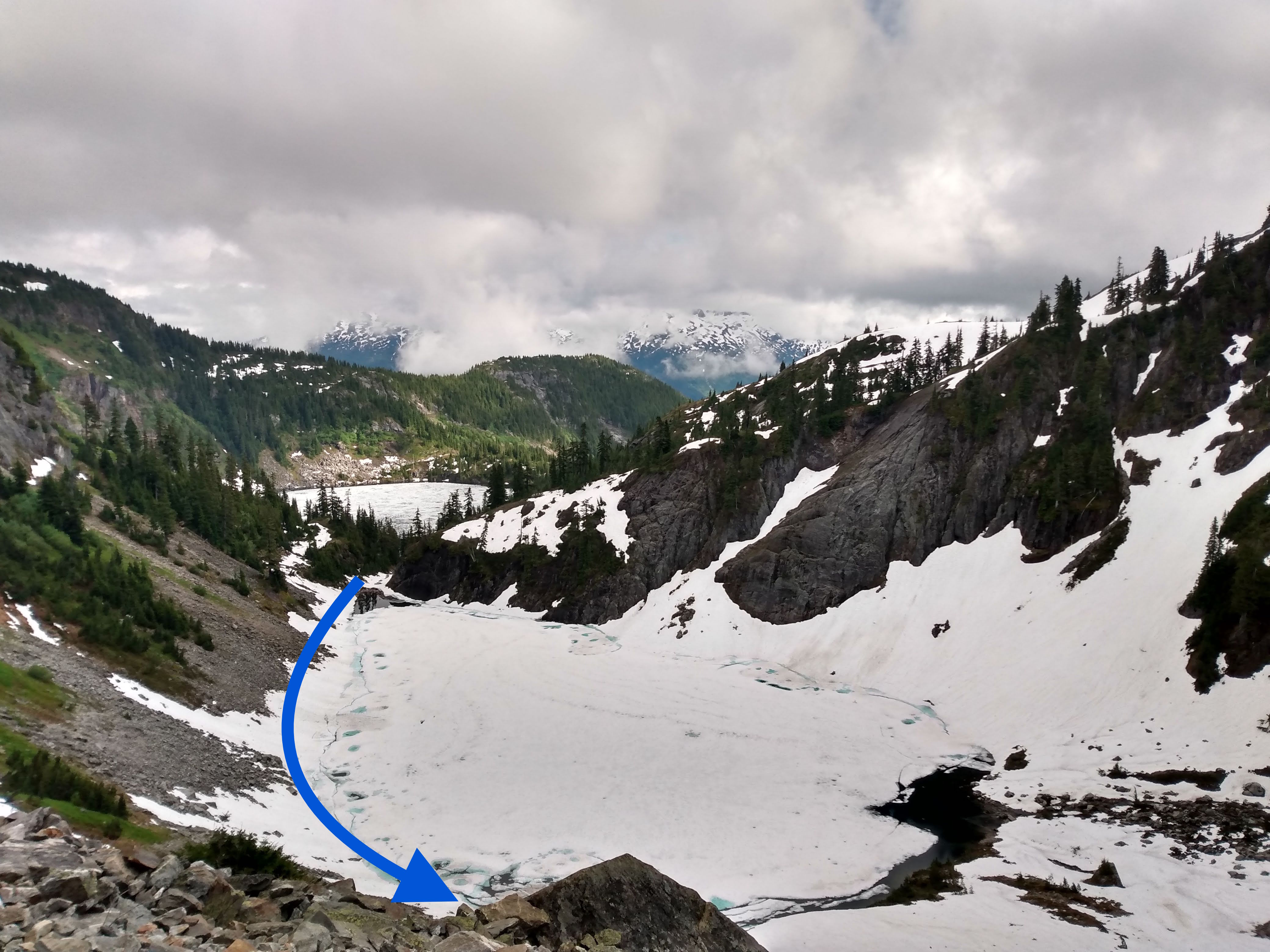 We walked along the right (east) side of the lake, which took us to the base of a steep slope, where it was a combo of climbing up snow, talus, and heather, which eventually gets you to the Col. (Jen: “thanks Nancy for that extra trekking pole!”). The Col has beautiful views in both directions, but limited bivy sites. We barely managed to find spots for 3 tents. However, we did have a bubbling brook running through the heather, pretty perfect for good nearby water. 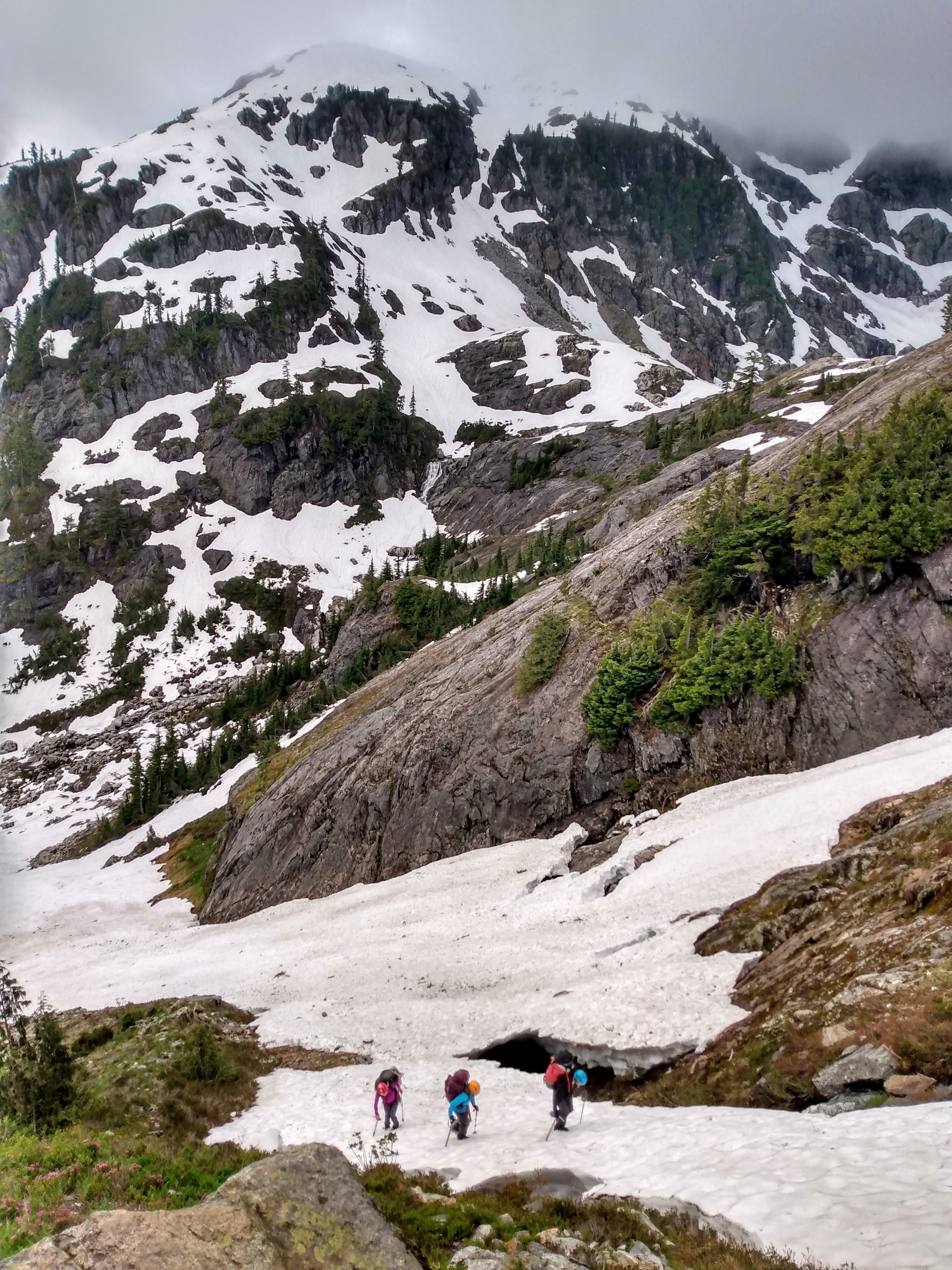 Hiking up to the Col 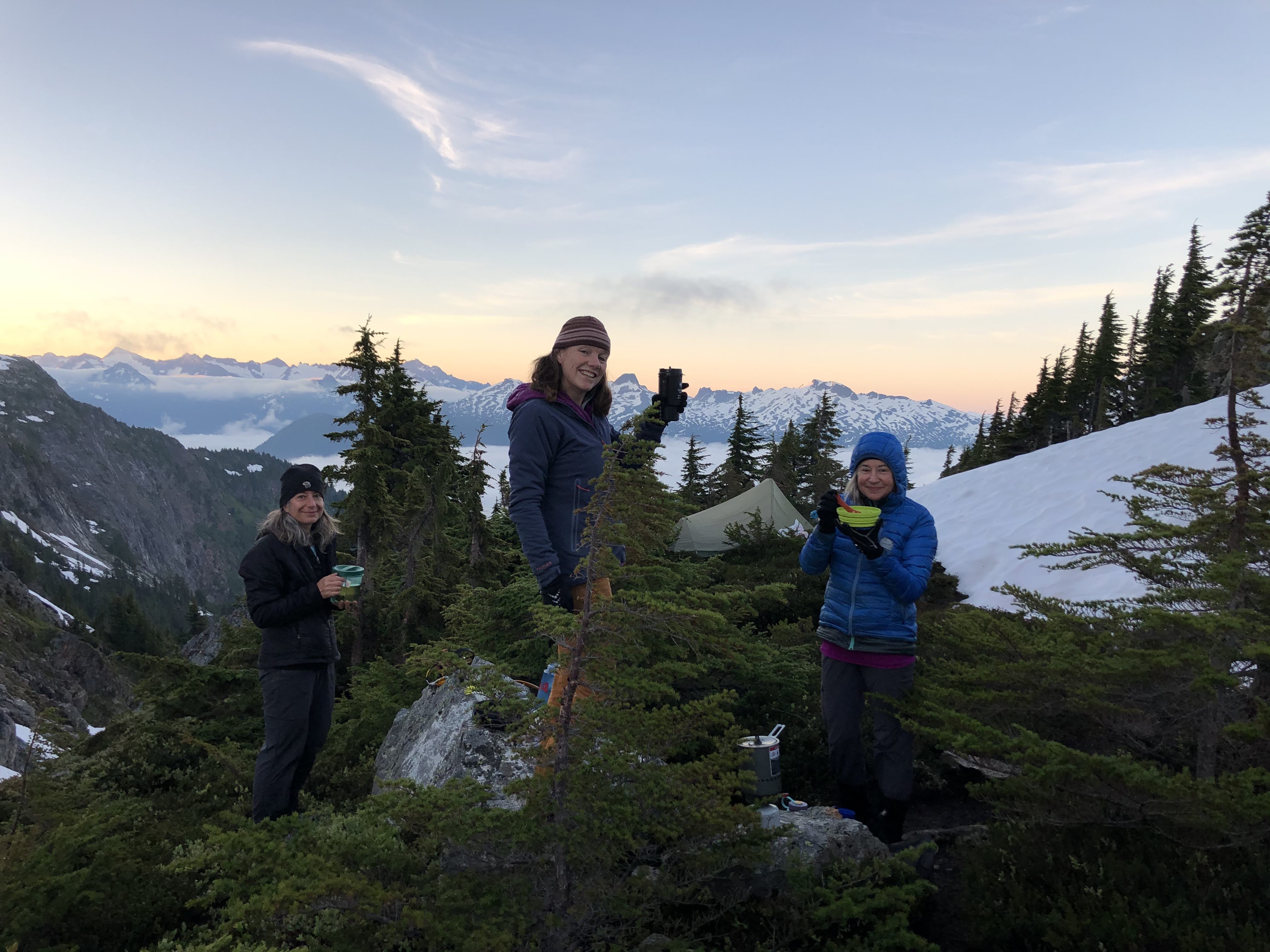 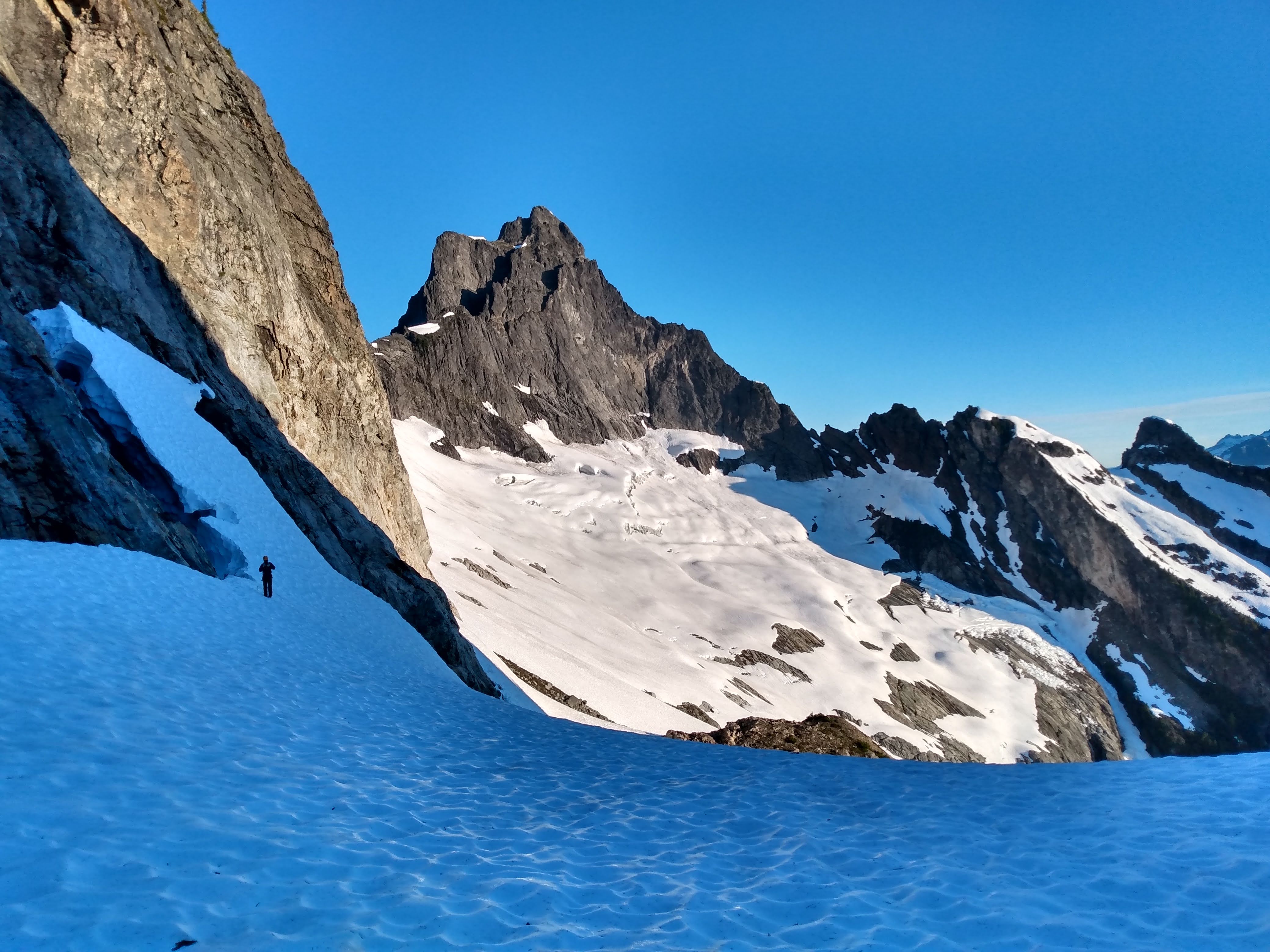 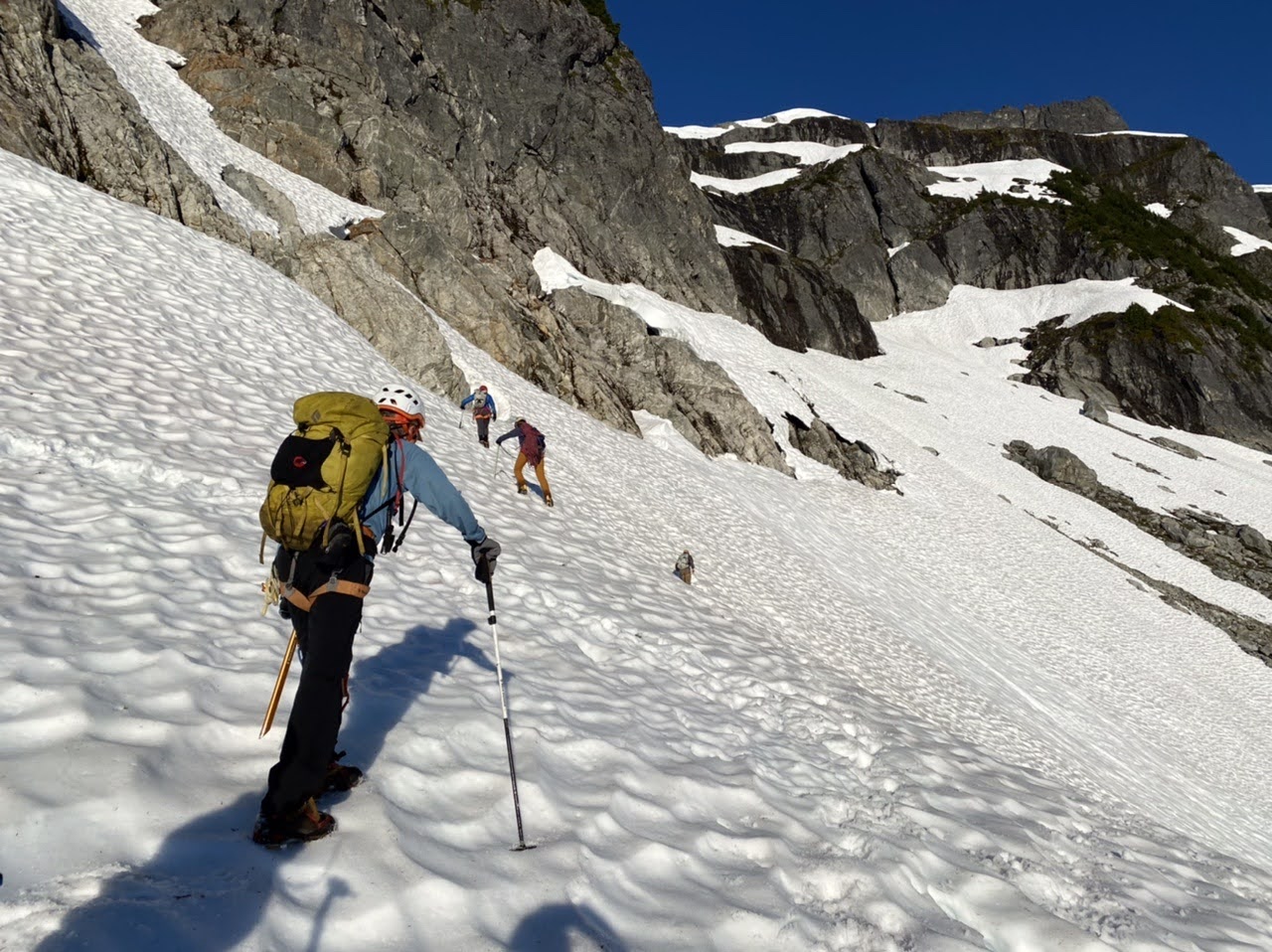 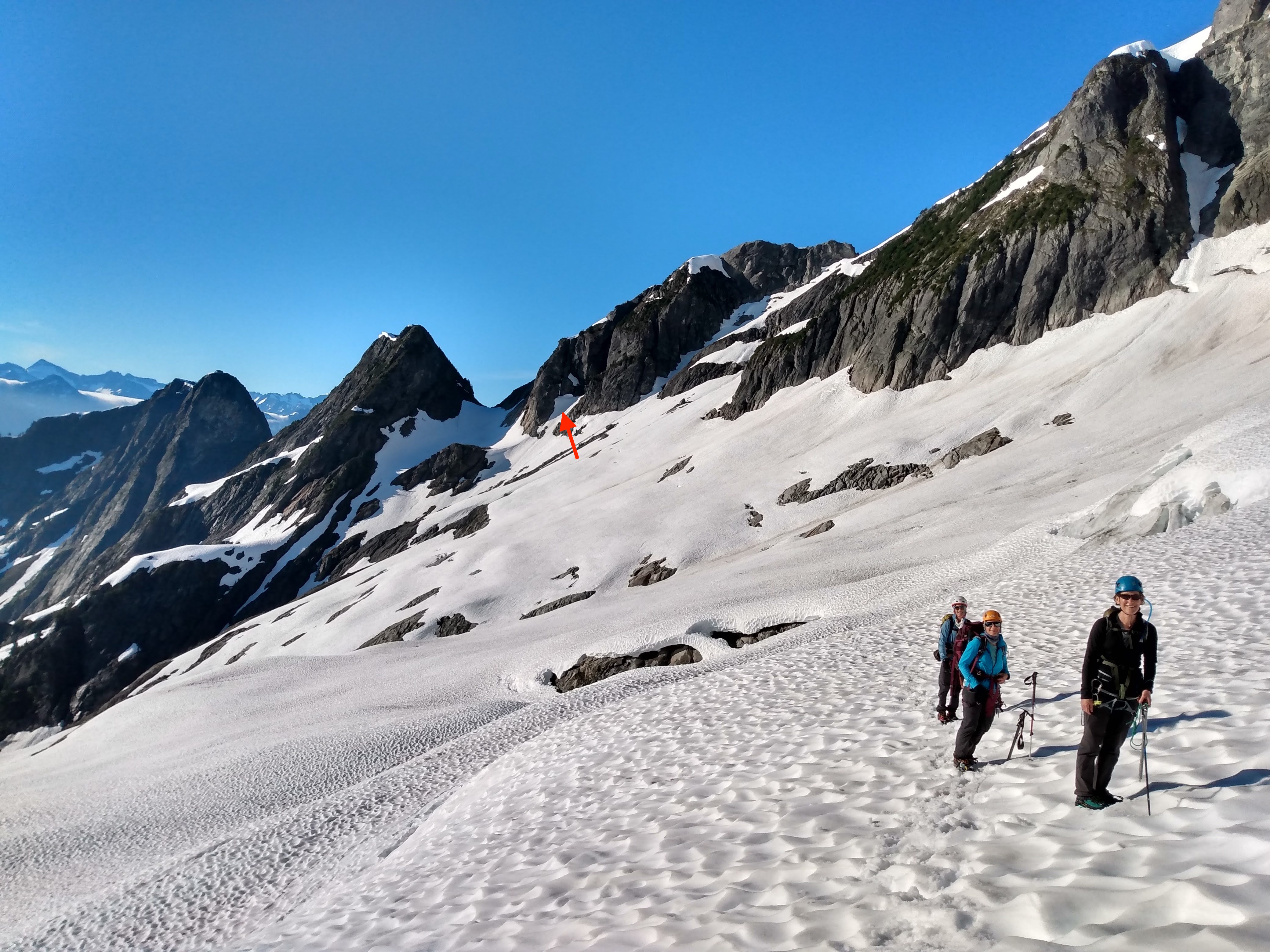 Red arrow is where the serac collapsed.

At the rocky toe of the ridge, we stashed crampons and ice axes. A little higher up, we changed into climbing shoes. Nancy opted to do the route in approach shoes, good for comfort but not so good for climbing slabs or traverses. We simul-climbed the route as two groups of 3, which saved us weight and gave us two ropes for rapping. 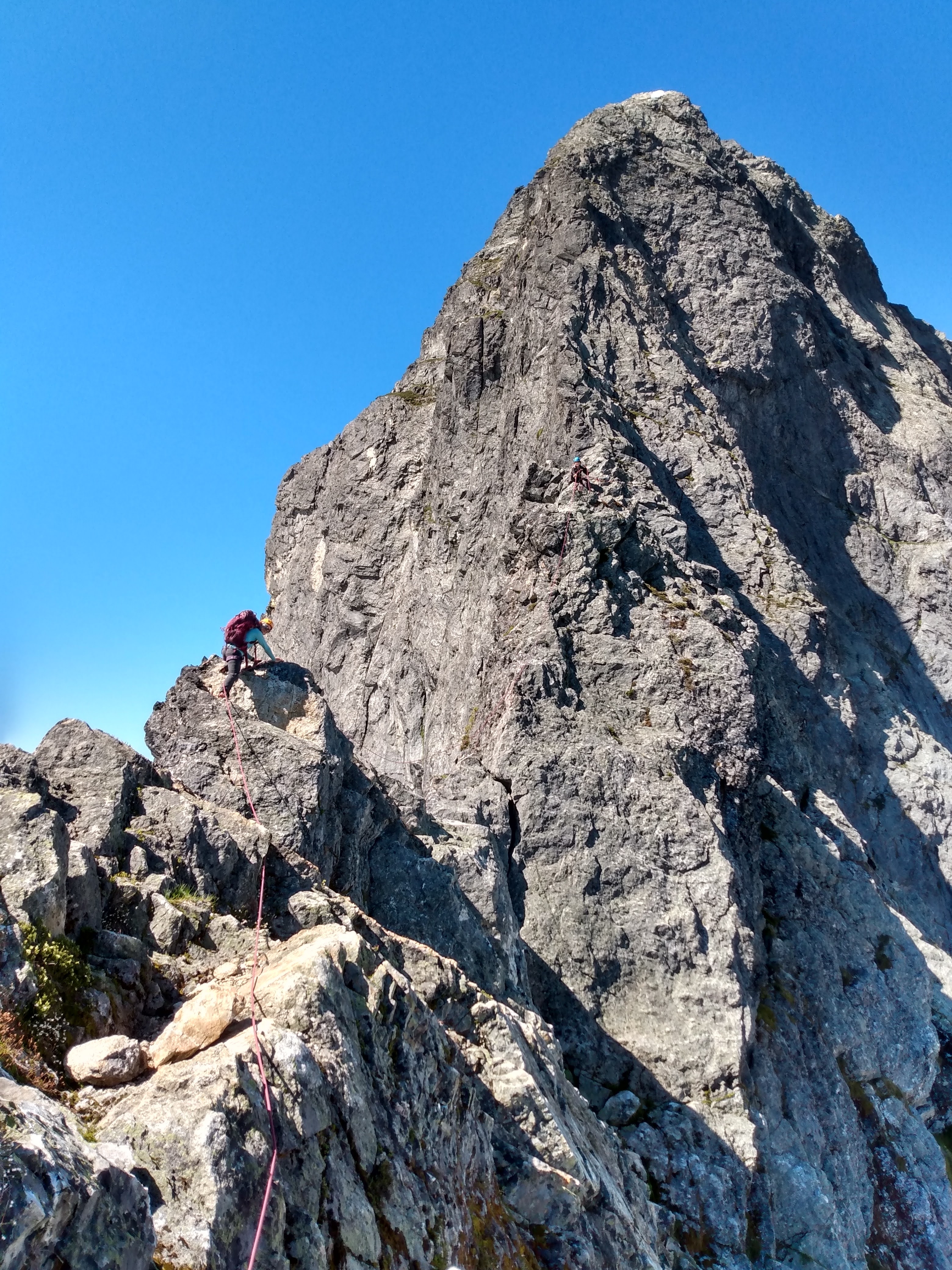 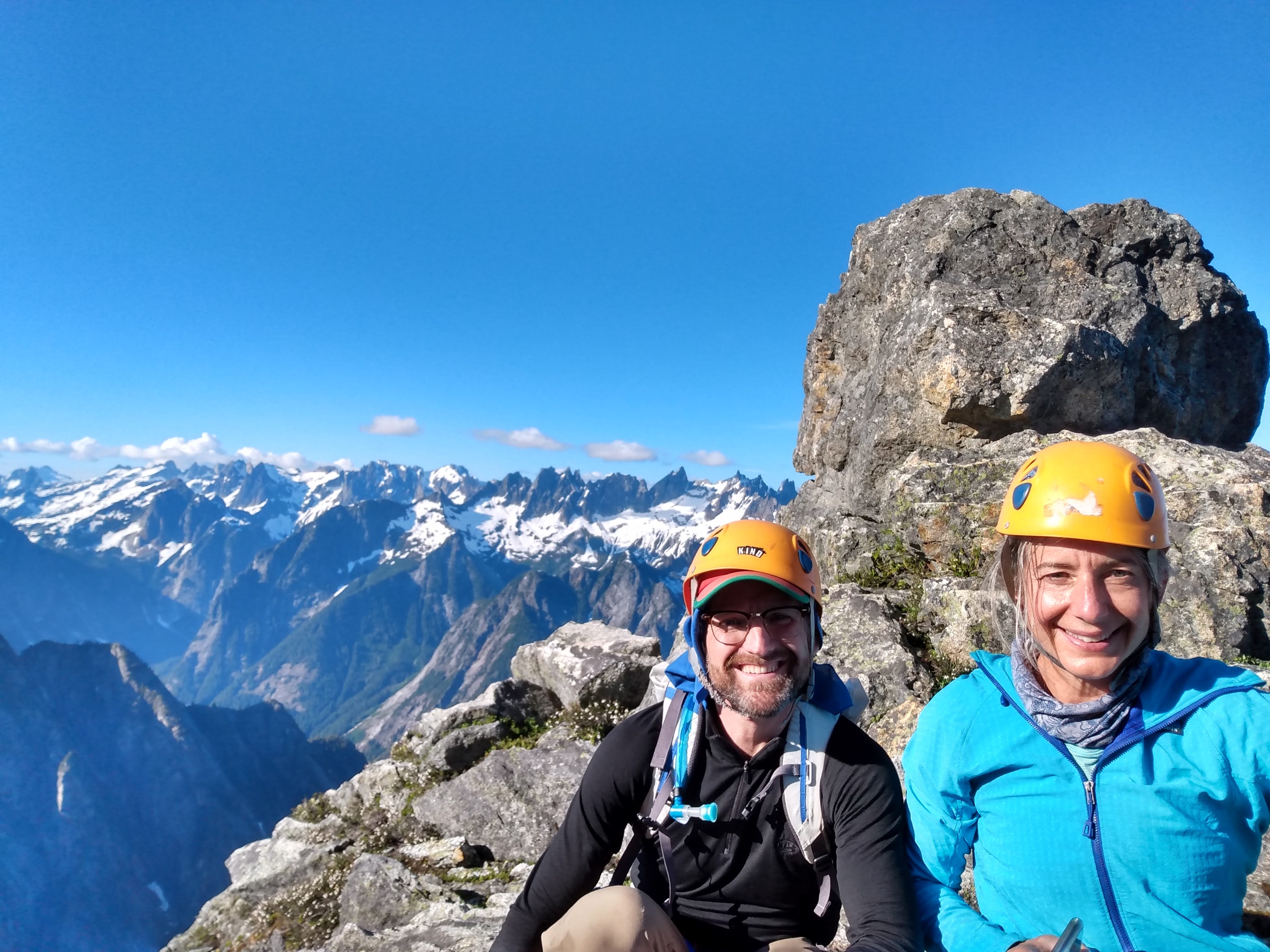 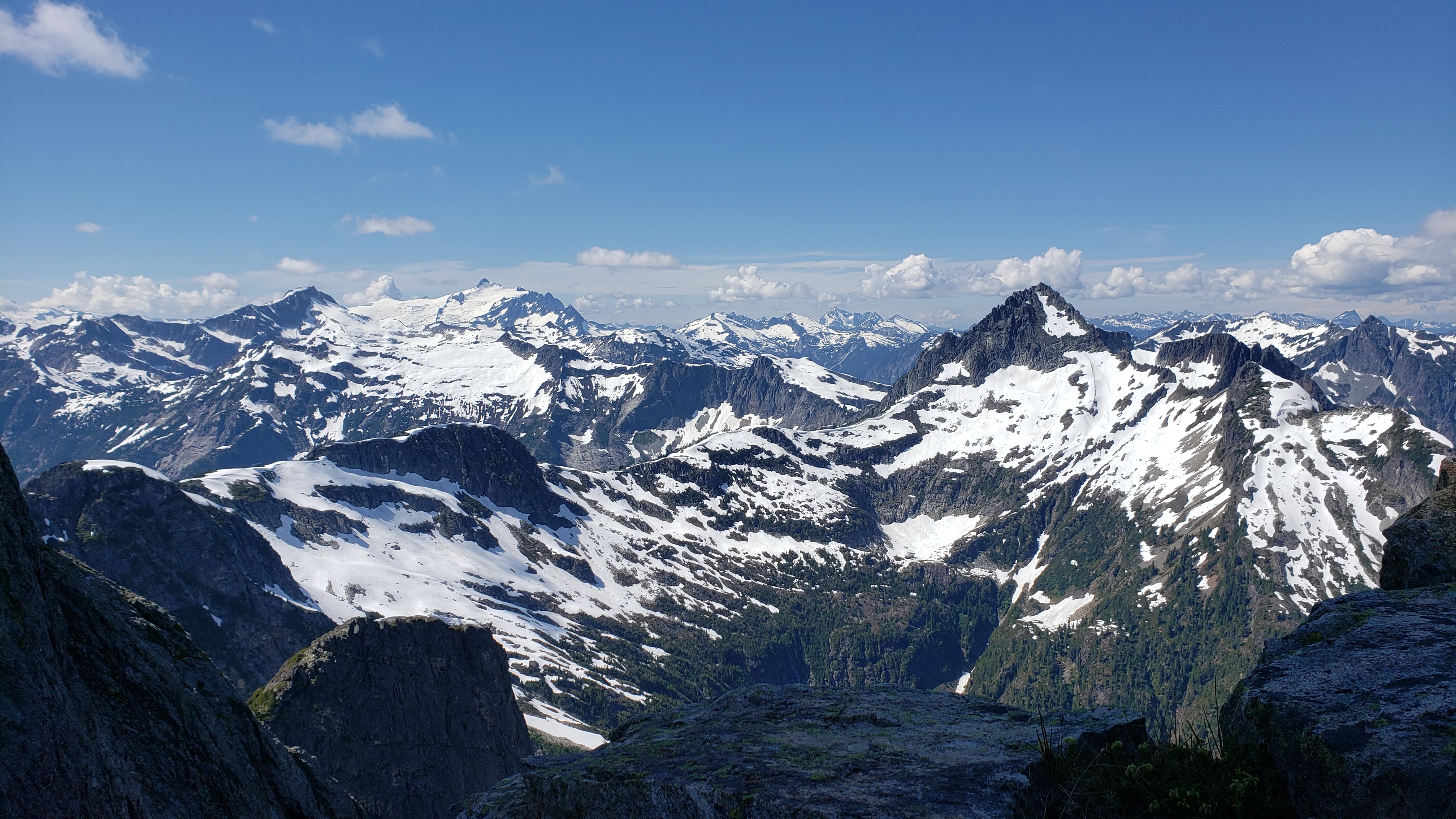 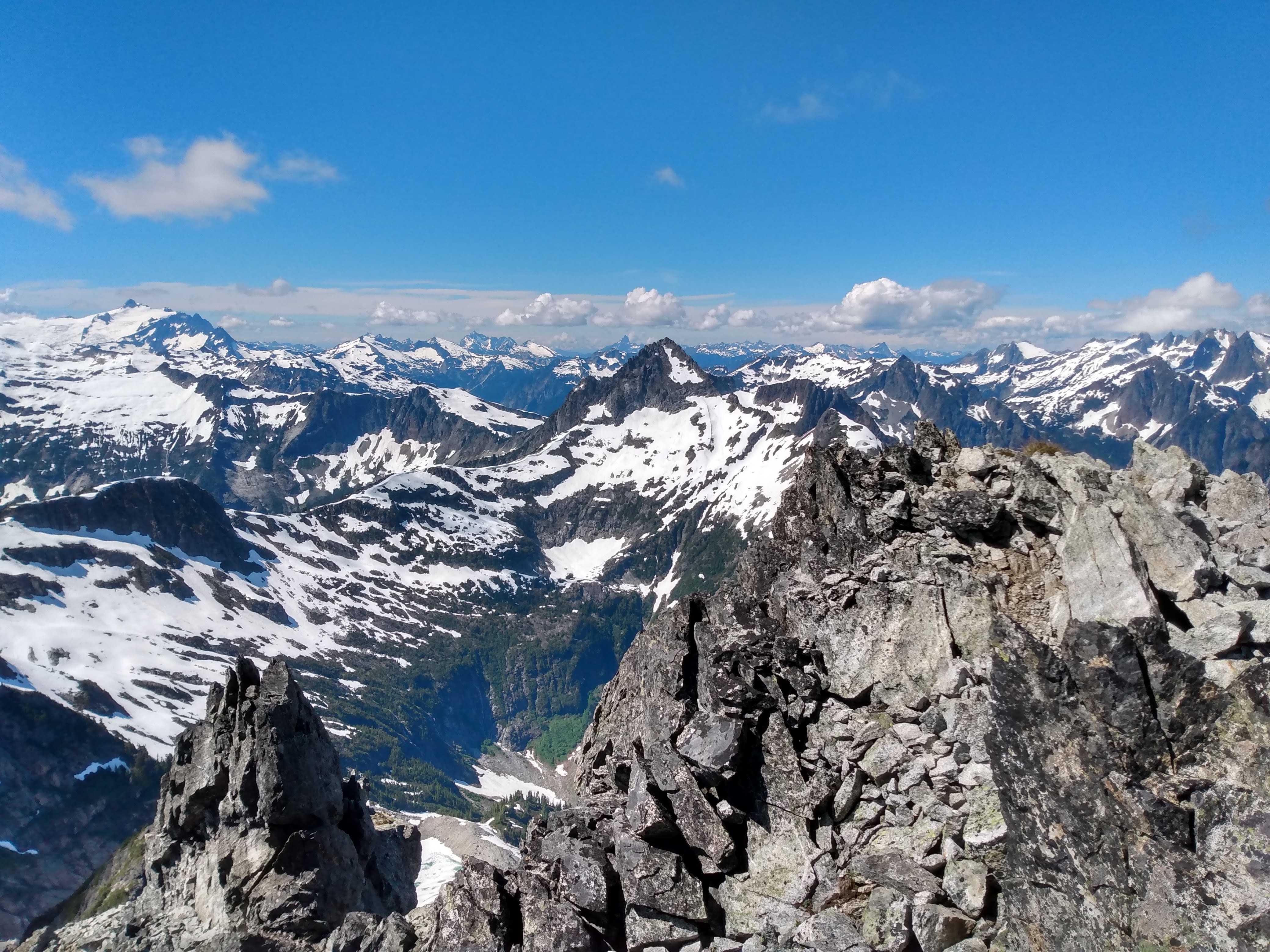 The climb is easy and fun, with ample places for gear. We did pitch out the 5.7 “off-width,” but it’s easy, short, and has a fixed piece of gear you can use. After the 5.7 pitch, you go past the “grassy bivy” into the notch between the ridge and the steeper final section of the route. The Beckey variation goes left of the notch (with better-quality rock) though there’s another option right (from the notch, descend 30 feet and go around right). Chris, Preston, and Karen went left, going up a mellow wildflower-laden scramble to the summit, with Preston singing Tom Petty’s “Wildflower” song. Sounds lovely. Jen, Kari, and Nancy went right, which was easy enough climbing but more plant vegetation than pro. Going right sucked up time, as the first group waited an hour for us on the summit (sorry!). We all were descending by 3pm. 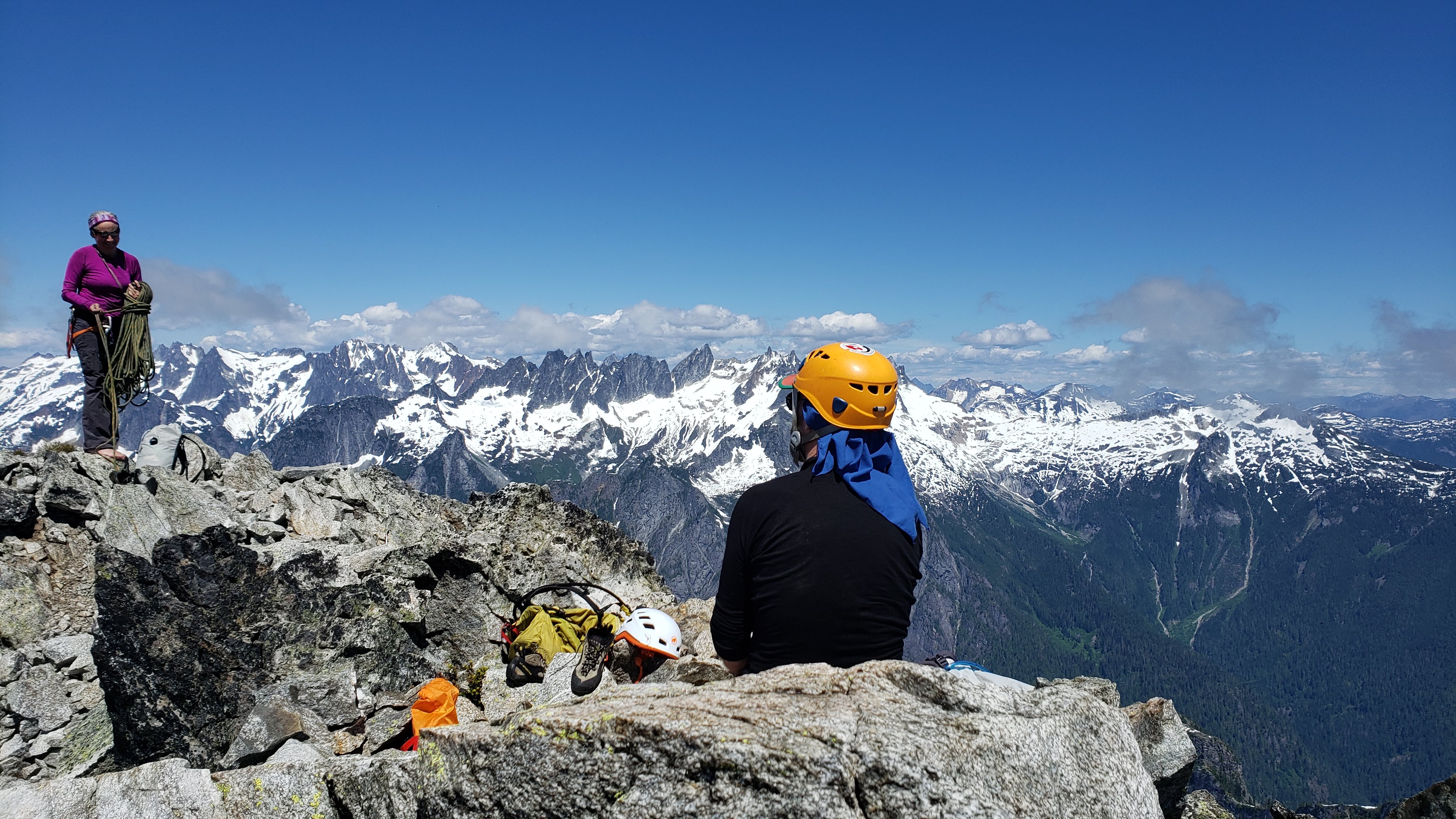 Karen and Preston on summit 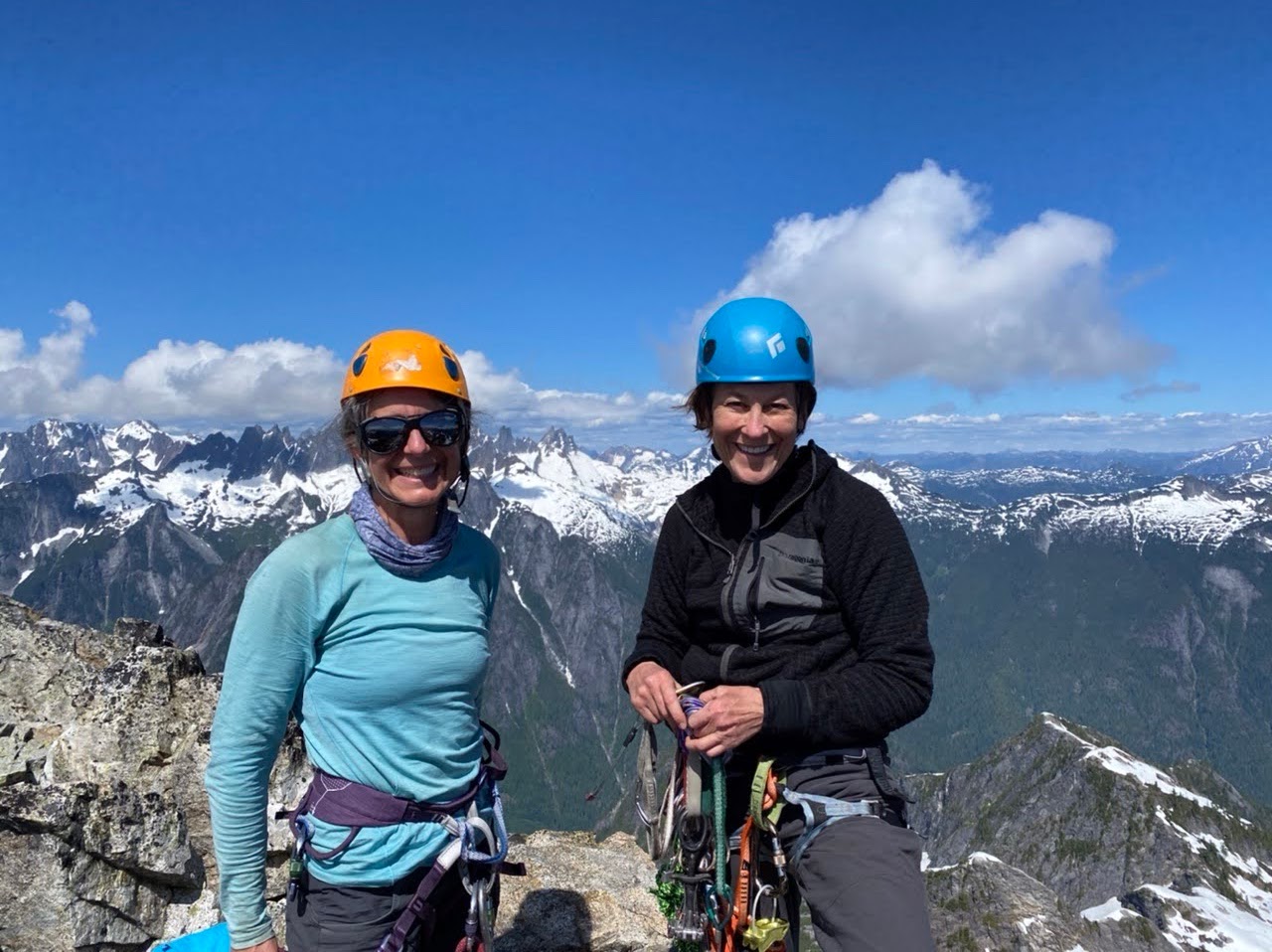 Descent
The descent is a combo of rappelling (single and double rope raps) and downclimbing. If you had one rope, you would have to do a bit more downclimbing and you could downclimb more of the route if you felt comfortable. There’s plenty of rap stations, with lots of webbing, but because it’s a ridge climb with features to get around, the descent takes more time than the ascent!  While the quality of the rock was decent, there were a few places with loose rocks, so be careful pulling your ropes (Karen & Kari gingerly pulled the rope near a large loose block that’s just about to go). We did the last rap as it was getting dark, so with headlamps on we scrambled down to our boots, ice axe, and crampons. 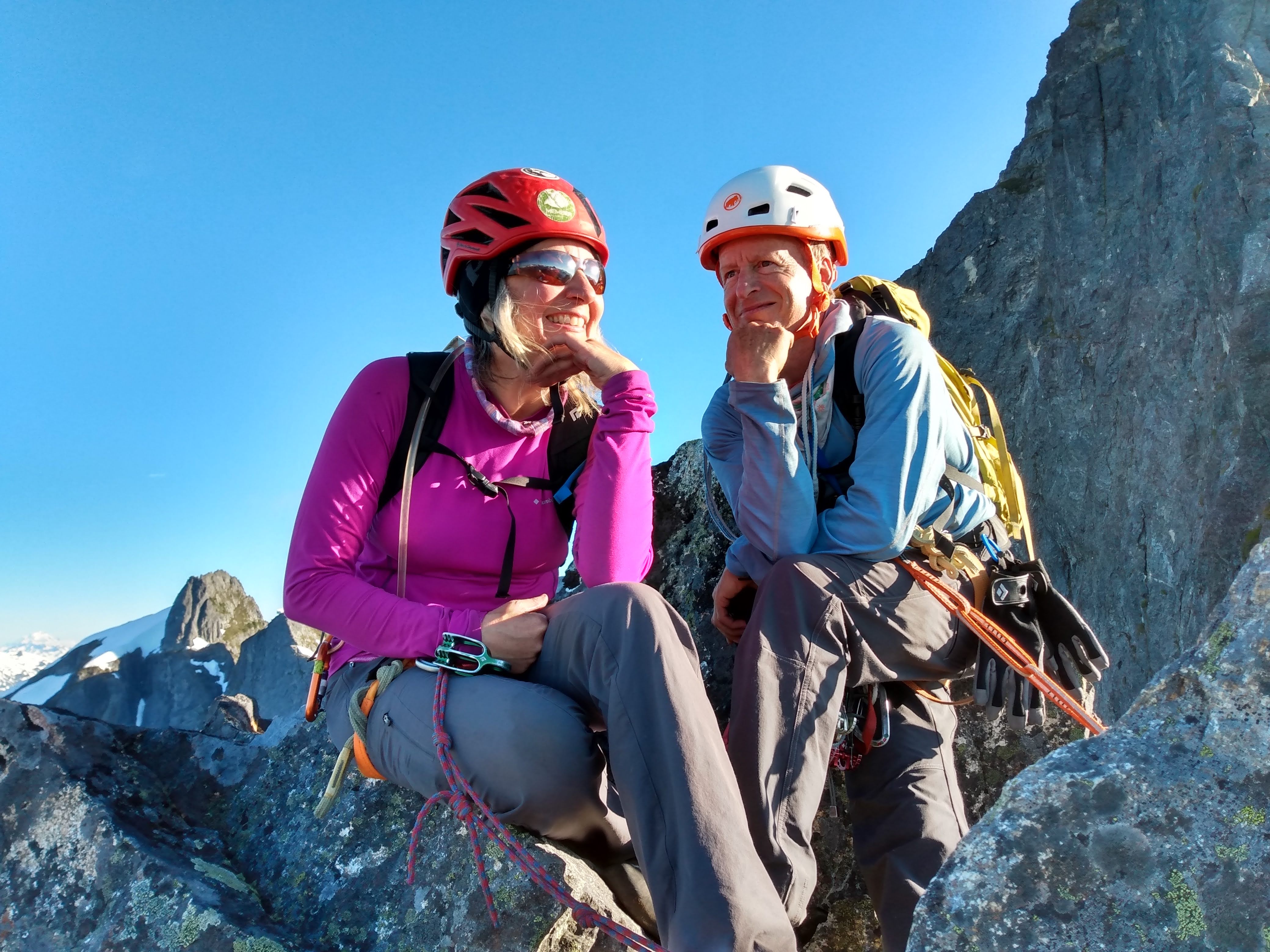 Karen & Chris guessing how long the descent will take 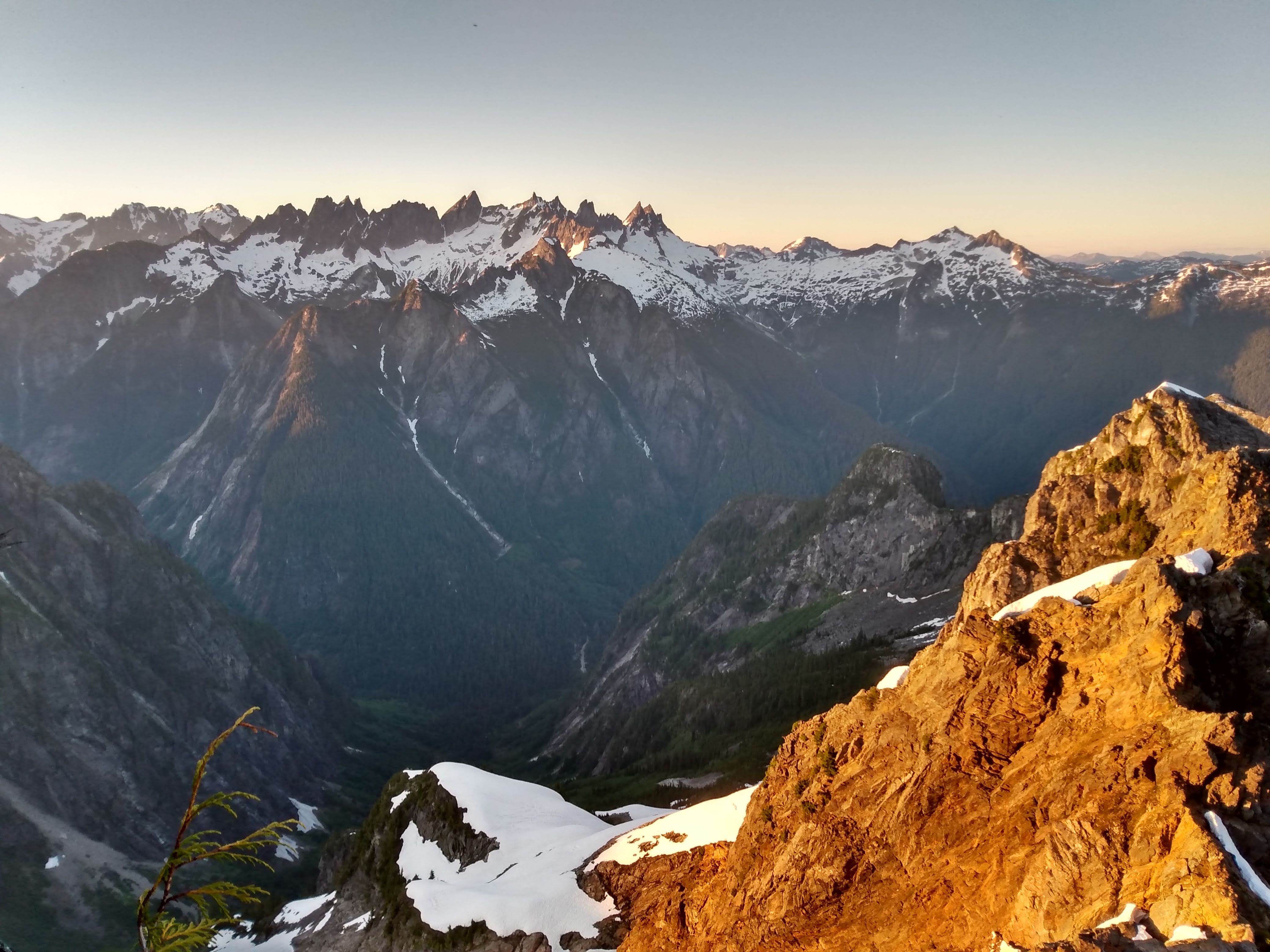 Great views of the Pickets… next trip…

While it’s never ideal to be descending in the dark, you do get to see the stars. And lucky for us, we also got to see the Neowise comet, which will not be coming back to Earth for another 6,500 years! (Thanks Chris for taking pictures!) Tired and happy, we began to walk across the glacier (at 11:30pm) back to the Col. The snow had certainly softened up in the warm weather. We were most of the way across the glacier when there was a loud CRACK! BOOM! as a huge serac broke right in front of us, sending down ice blocks that were the size of cars. Kari was leading and the ice chunks were probably about 70-100 feet in front of her. It was terrifying. Some of us were silent, and some of us were saying things like “shit shit shit” or “oh my god, that would have killed us.” After the ice chunks blew down, there was still some ice hanging precariously. And we still had to cross below it, as there was no way we could climb above. We decided to cross—one person at a time—and all of us moved as quickly as we could, thrusting the ice axe into the now sheared snow with hearts pounding. Once we made it back to the Col, we turned off our headlamps to take in the clear night sky—stars, planets, a comet, and the Milky Way—all shining down on us. As Karen put it: it was a full-value day in the North Cascades!


DAY 3: Col (5,700 ft) Trailhead (2,700 ft)
We woke up to a sunny day and encountered some other climbers on their way in. Packing up, the descent down the snow slope and heather was fairly quick but we somehow missed the ‘climber’s trail’ along the lower Thornton lake so had to bushwhack and avoid snowy tree wells. 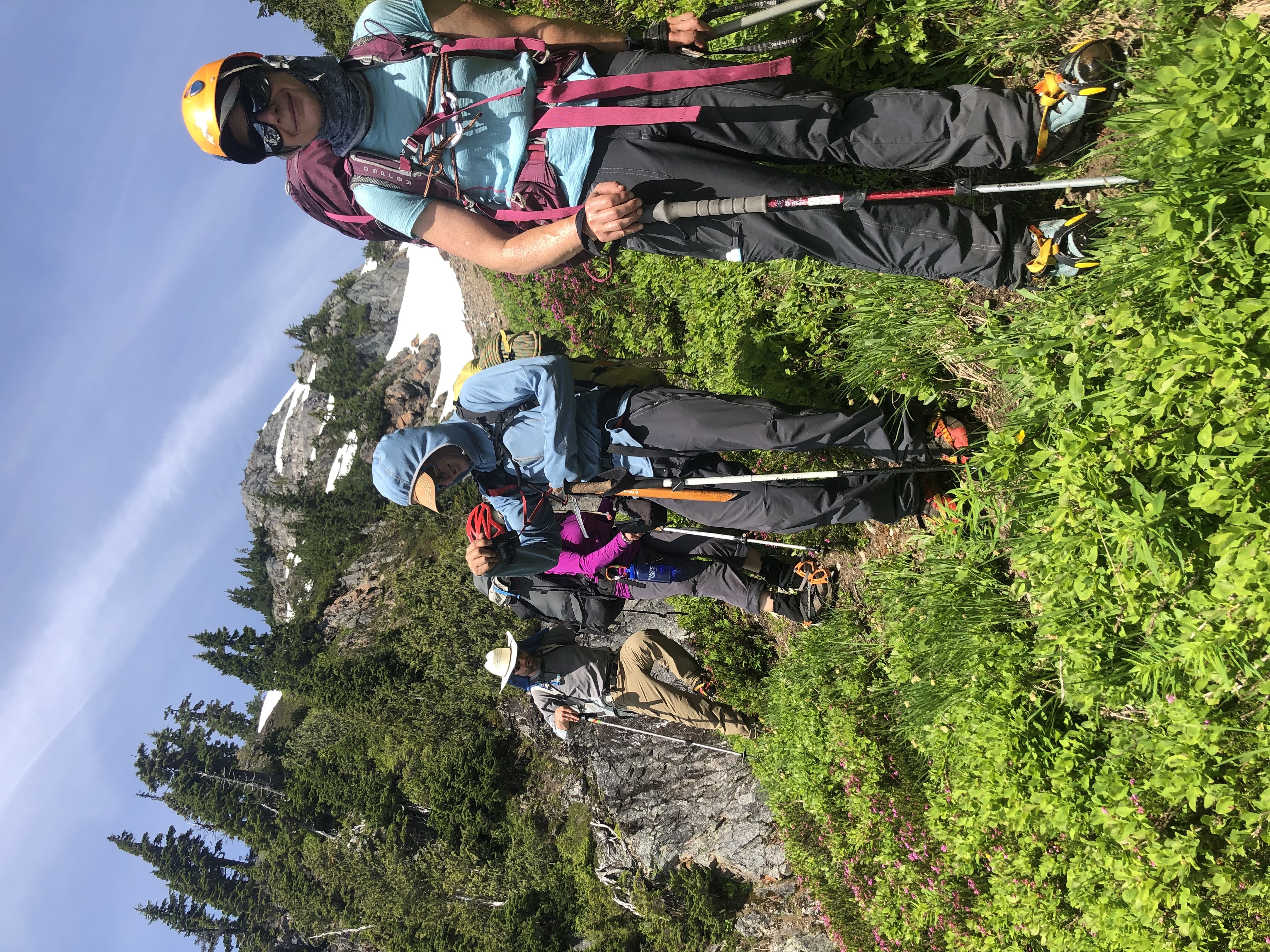 Crampons on heather, scree, and snow 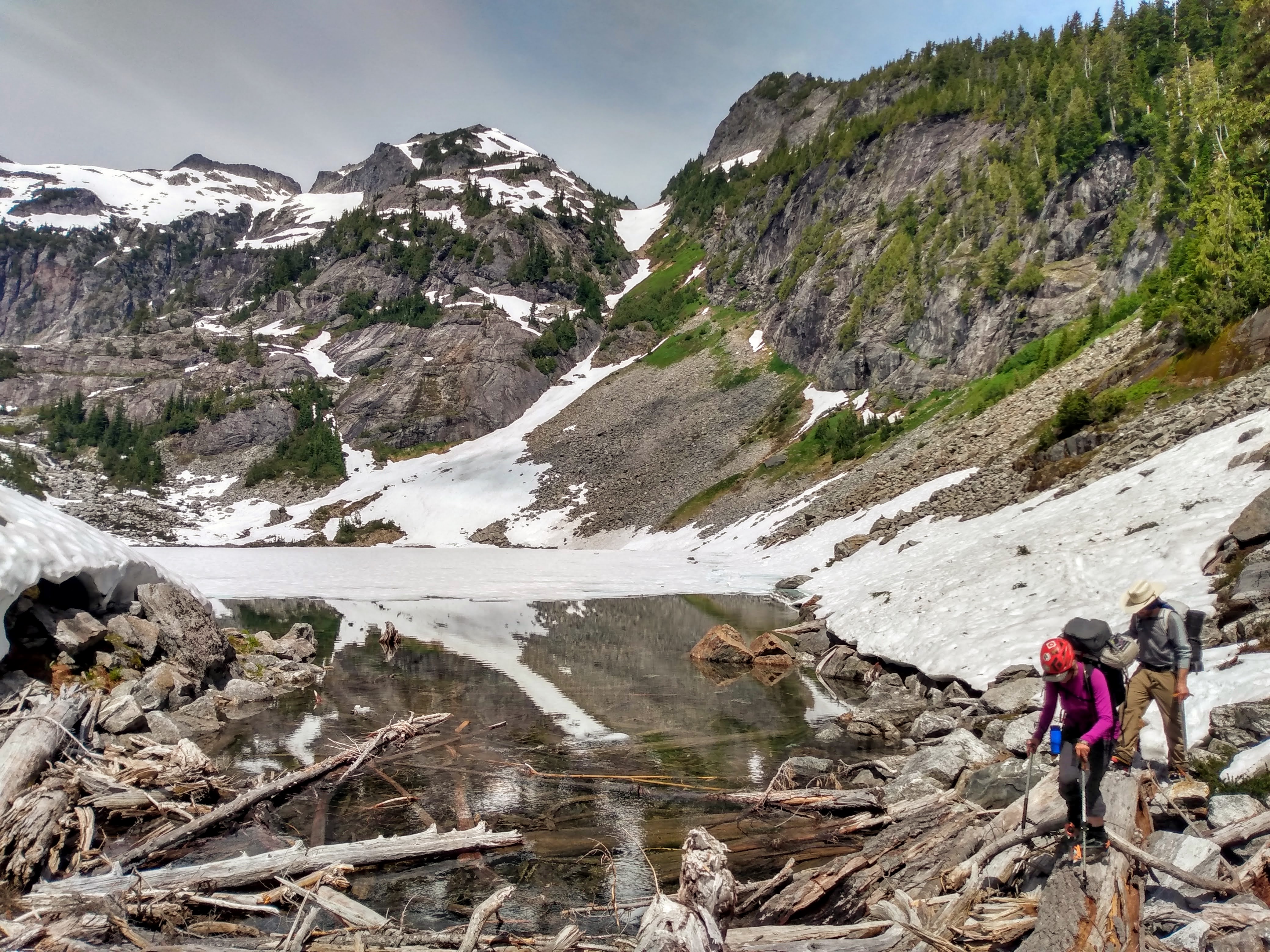 Look how much snow melted from Day 1! 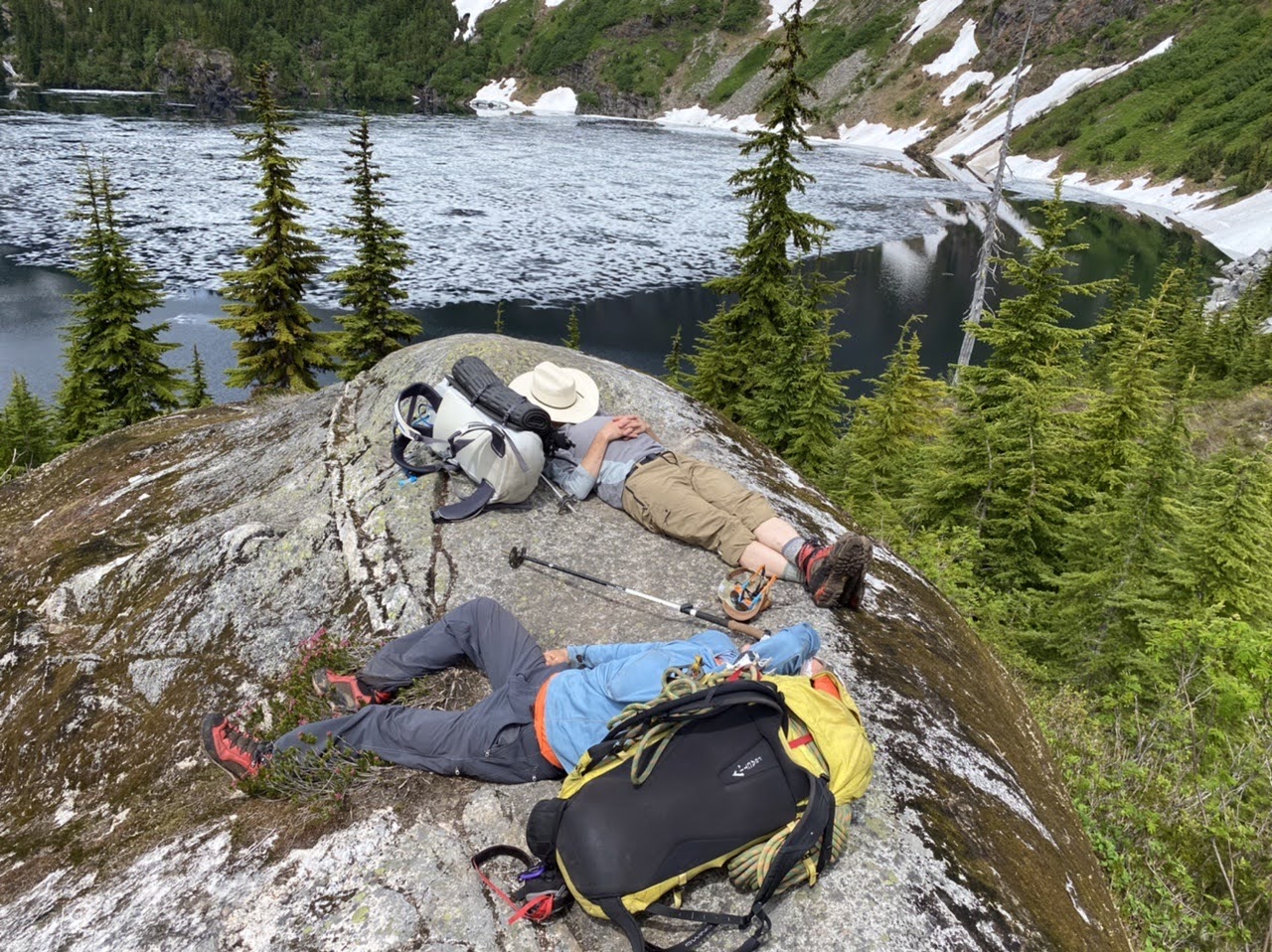 Eventually, we were back on a wonderful trail, heading back to the trailhead. Celebrating the climb the way we often do—sprawling on the pavement, with mountaineering boots off, eating chips and drinking beer. Decadent.

The trip was great—it’s a fun climb, Cascade views are gorgeous, and we had great teamwork. Most importantly, the collapsing serac didn’t kill us! We learned an important lesson about being extra careful with warm weather softening up the snow so quickly.

It was great to be back in the mountains again!

Gear List & Notes
Small rack: cams .4-#3; small set of nuts; 10-12 slings
Additional gear: trekking pole, ice axe, crampons
Conditions: Because of the pandemic, there was no recent trip report on Triumph and little info available on recent conditions. There was much more snow than anticipated, which meant that you definitely needed crampons and an ice axe. Another party with microspikes made it to the Col but turned around when they saw the amount of snow.

Approach:
Hike 5.3 mile (2,200 ft) hike from the trailhead to (lower) Thornton Lake. Follow the climber’s trail on the left (west) side of the lower lake, which then leads to the next lake (Middle Thornton lake). Try to stay on the climber's trail, you'll be happier if you do! Then go around the right (east) side of the middle lake, climb up the snow/heather/scree slope to the Col (bivy). Approach the climb by traversing the glacier to the toe of the ridge, where you'll start climbing.