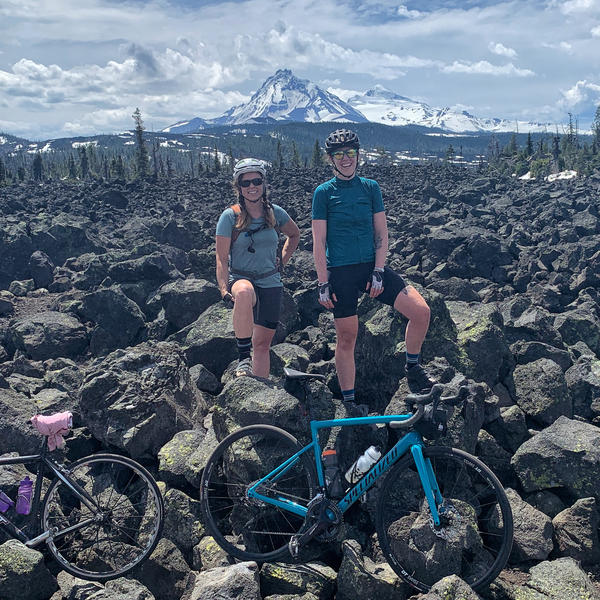 Karly and I met a little over a year ago on a backcountry ski/snowboard trip in the Enchantments, on an endeavor to attempt Mt. Stuart over Memorial Weekend. Her passion for the outdoors immediately caught my attention during our hike, but it was her ability to hike and ski anything put in front of her that made me want to be her friend. A little over a year later, that friendship developed deeper. Karly’s new love for road biking led us to a night of camping in Sisters, Oregon, and an incredible 50-mile scenic day of biking through some of the most stunning topography of central Oregon. The forecast for Friday, May 29th was in the 80’s with chances of showers in the afternoon. Now, my parents live in Terrebonne, Oregon, so I knew that high desert heat gets brutal in the afternoon and I convinced Karly to be up at the crack of dawn to escape the heat. Karly, who had never ridden the pass, was excited at the thought; while I, having done the pass a few times, knew the views we were about to see and couldn’t wait.

We packed up our gear, making sure we had food and warm clothes for the descent down to the McKenzie River Highway. Coming from the Sisters side of the pass, you get to the Cascade Peaks sooner. It was a beautiful, perfect day for a ride. It began slowly and steadily uphill towards Mt. Washington, and eight miles into the 1200 ft climb, we found the perfect spot to get off our bikes and stretch. 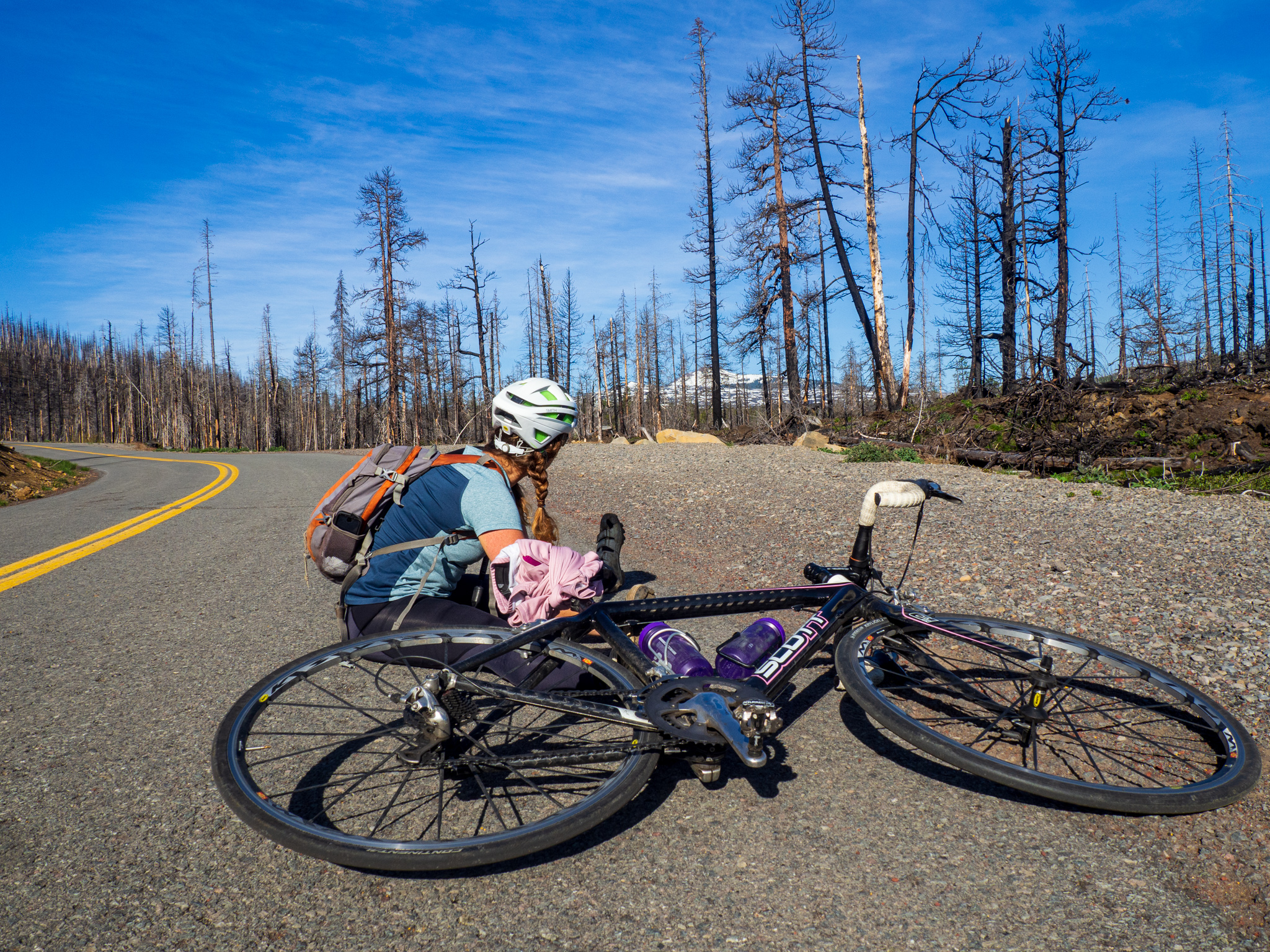 Experiencing some pain in my seat, I decided to use my long sleeve shirt for extra butt padding, much to the amusement of my biking partner. (Little did Karly know that 20 miles later, she would be doing the same thing). Mt. Washington provided the perfect photo opportunity with its couloirs and lines for days; the dreamy type of skiing with perfect spring corn snow. At Mt. Washington, the terrain shifts from high desert pine forests to the lava rock obsidian flows from Belknap Butte to the Sisters. The black rock is a drastic comparison to the white snowy peaks; it’s like the yin and yang of Central Oregon. 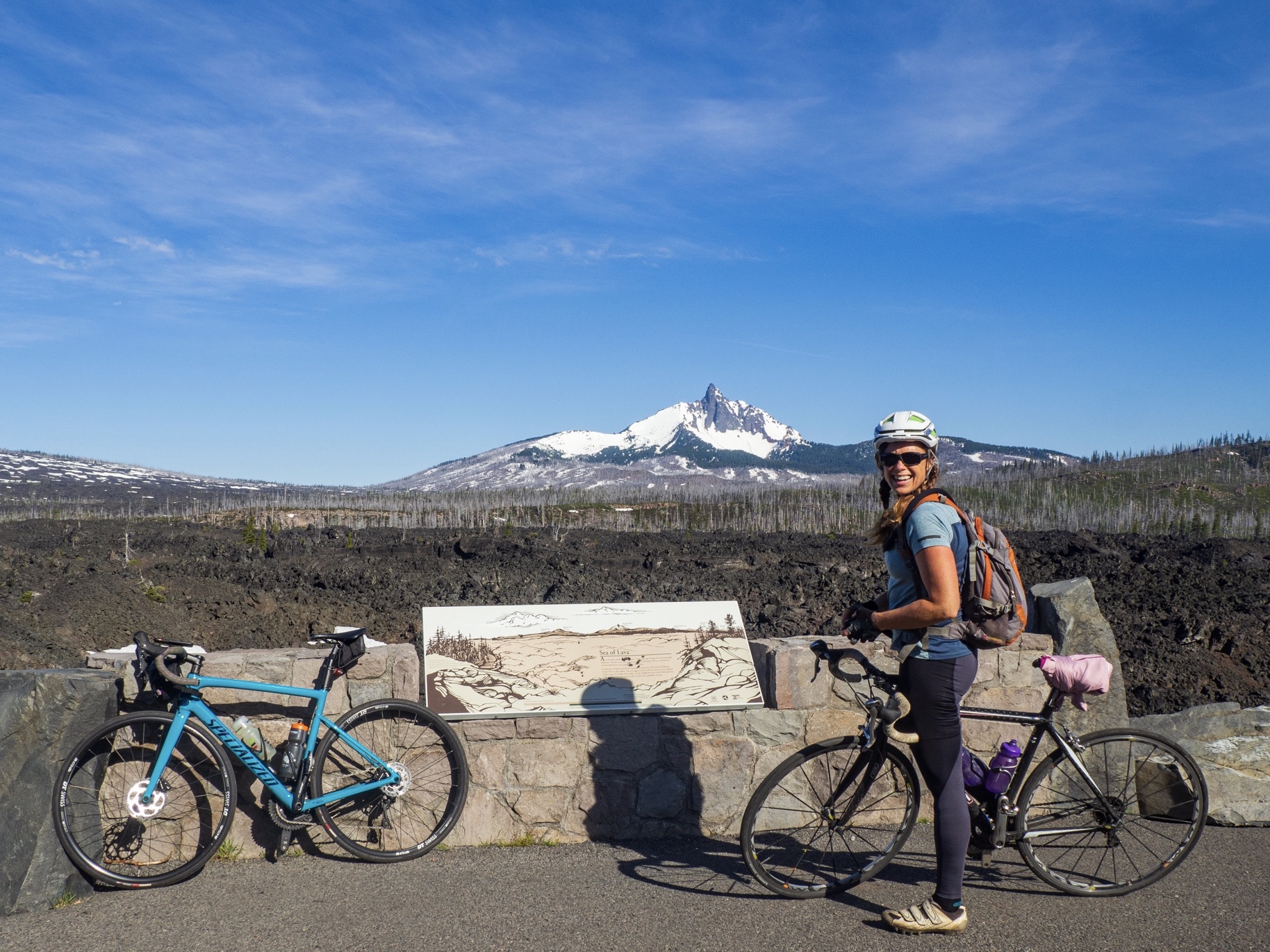 As the road starts to crescendo up and down to the top of the pass, you arrive at the Dee Wright Observatory and are greeted with views of the Three Sisters: Faith, Hope, and Charity. These iconic peaks that can be seen from all over Central Oregon look even bigger when you’re within a few close miles of them. 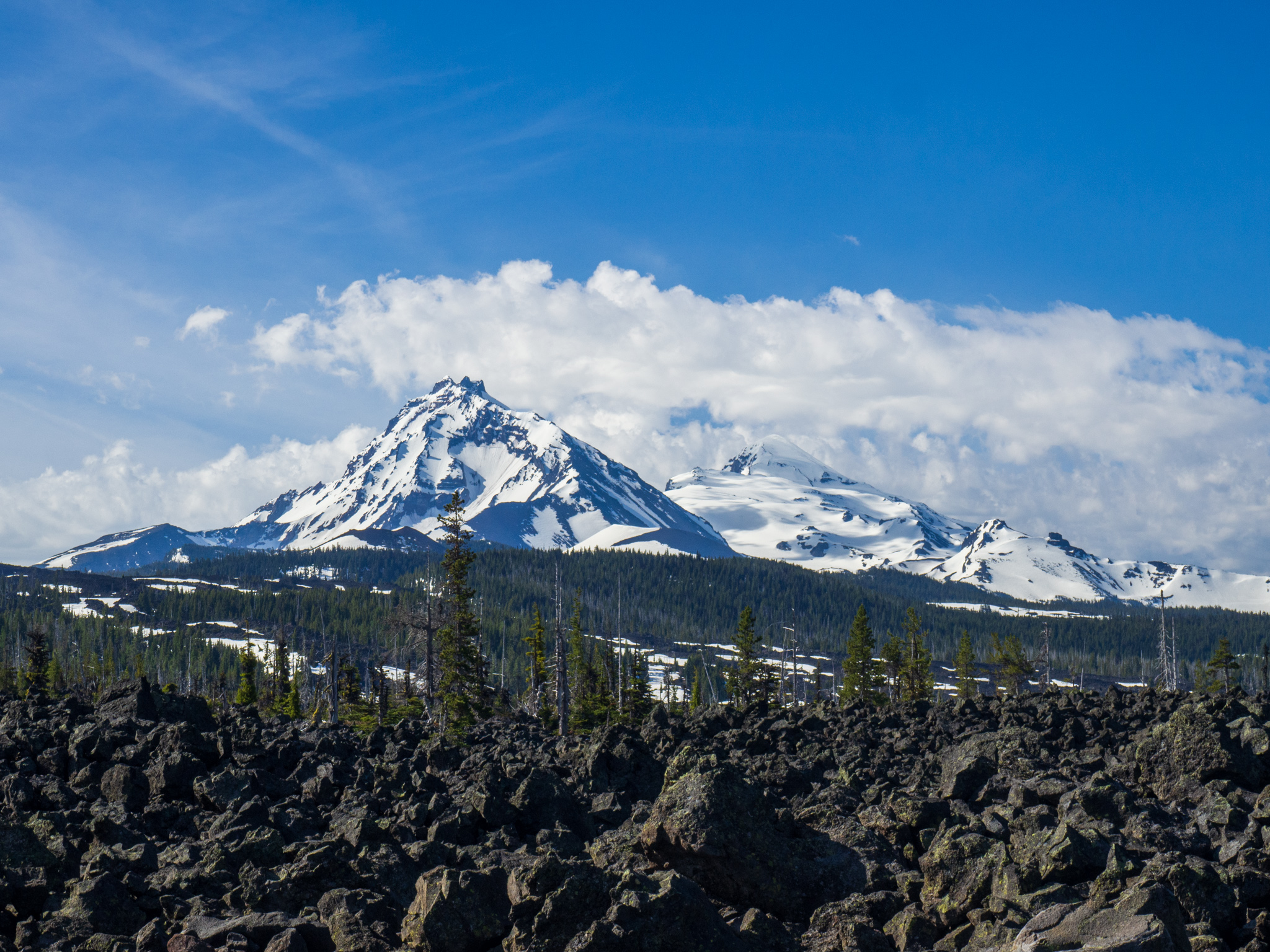 Standing tall and proud on the sharp lava rock for a portrait, Karly and I were reminded of how truly small we are, in that time and space.

Checking our water and snack levels, with massive smiles on our faces, we started the 15-mile descent.

Passing lakes and bends, the road straightens out to more dramatic views of the Sisters. The shade of the thickening forest was a relief from the morning sun. The hot dry air turned cold and crisp, so cold that it was time to put on extra layers. Karly began the chorus of hoots and hollers by the two of us, quickly followed by massive smiles and “Wahoo-os!” We were flying downhill on one of the most incredible roadways without a single care in the world. Just the two of us and mother nature’s massive playground, the sounds of birds chirping, and the whoosh of the wheels along the road.

Gallivanting and giggling down the hill, we suffered our only casualty - a flat tire - while riding around the first gate before the campgrounds. Girl power is real and a sweet woman in her car offered us her handheld pump (we only had canisters) and the casualty was quickly fixed and we were on our way again. It was a good reminder to purchase a pump or switch to tubeless (debatable I know).  Upon arriving at the second gate, 22 miles into our trip, we quickly ate and reapplied sunscreen. After some deep breaths and stretching, we hopped back on our bikes.

We decided to turn around at mile 25 and cycle back up the giant hill we so quickly descended. It’s always fascinating how much longer it takes to go uphill versus down. We climbed, up and up for what seemed like hours and miles. Shade provided by the forest on either side kept us cool as we climbed, occasionally passing signs marking our elevation: 3000 feet, 4000 feet, 5000 feet. We stopped to shed layers and I copied Jocelyn’s spare shirt butt padding technique to reduce the pain my seat was causing. We passed by melting snow in the shade which lowered the temperature considerably, making our ride that much more pleasant.

After climbing for 15 miles, we arrived once again at the Dee Wright Observatory. Quite a lot more people in the afternoon than at 8 am which made for good people watching. We asked a gentleman to snap a few more pictures of us before laughing and grinning maniacally, knowing we had a fun and zippy descent the final 10 miles to the car. Down we went, still hooting and hollering and enjoying every beautiful minute of the ride. The sunshine stayed with us all day, we had only one flat, and we had the time of our lives. It was the best ride in one of the most scenic areas of Oregon with my awesome adventurous friend. Here’s to many more Oregon experiences this summer! 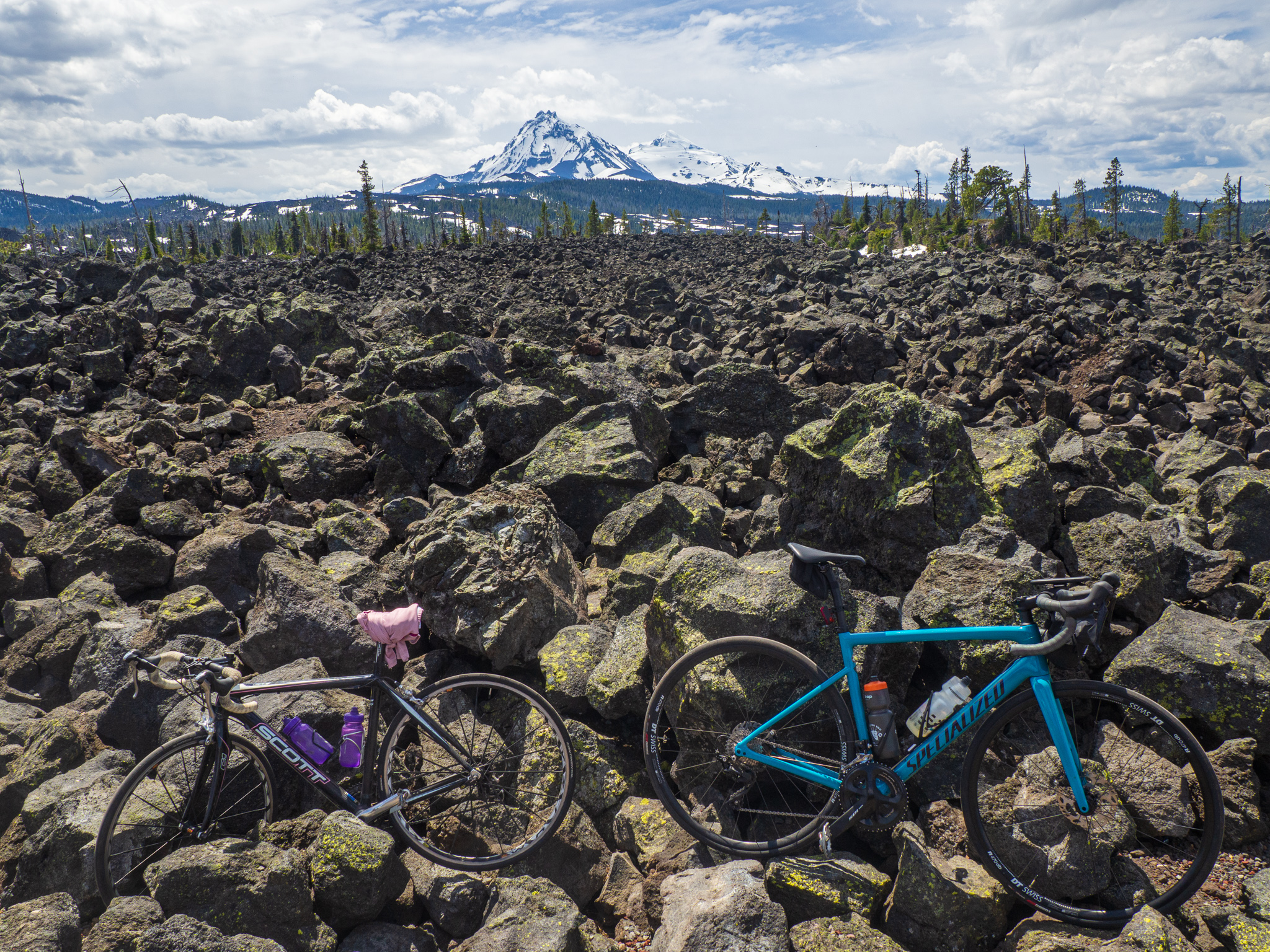