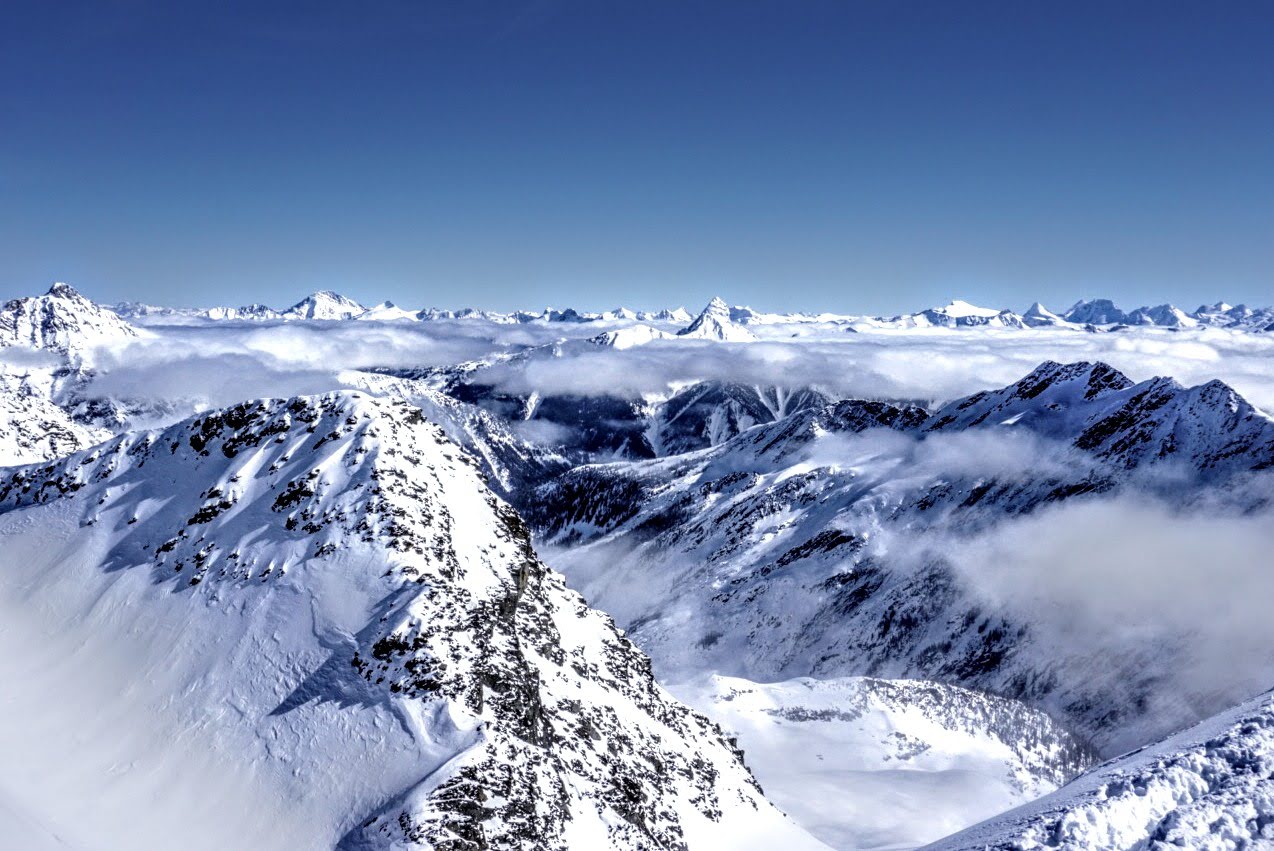 The skin track Reudi Beglinger sets—the angle, the route, the pace—in many ways approximates art. This makes Reudi, and no means by default only, an artist. A backcountry alpine artist. Today’s skin track starts from the Durrand Glacier Chalet, the primary lodge for Selkirk Mountain Experience’s ski touring operations. The chalet is perched on a ridge at over six thousand feet, deep in the Selkirk mountains of northern British Columbia. The only way to get to the lodge, other than a multiday ski over mountain and through valley, is by helicopter.

The track continues steeply up the terminus of the Durrand glacier onto the glacier proper. There are about sixteen to seventeen people divided into three groups, one guide per group. Reudi has five to six people, Phil an additional 6-7 people, and Ian is our Portland group’s guide. Each team, separated by a hundred feet or so.

We slog along the relative flat of the icefield where Durrand and Diamond glaciers meet. Reudi methodically breaks trail through the two feet of fresh powder that brought an end to a five-week dearth of precipitation and the dreaded Polar Vortex (pronounced Pola Cortex, by Reudi). We veer north. The day has ushered in partly cloudy skies. We can see where we are headed: up the Diamond glacier to the top of Tumbledown mountain. It is a long way away.

A couple of months before at the Mt. Shop, I was swapping ski stories with a customer while I rang him up at the cash register. He was headed to British Columbia for some Cat Skiing the coming weekend. I mentioned I was going to ski at a lodge in the Selkirks.

“What’s the name of the operation you’re going with?” the gentleman asked.
“SME.”
“Oohh,” he said, nodding his head and smiling. “With Reudi.” (Except he pronounced it, ‘Roodi’, the emphasis on the, ‘Roo.’) He made as if checking the time on his watch and then began a series of chopping motions with his right hand into the palm of his left.

I laughed. Reudi, I’d realized, had a bit of a reputation. In fact, when it came to choosing a place to ski, I didn’t just stick my hand into the ski-hut hat. There are dozens of ski touring operations scattered throughout British Columbia. I first heard of SME from my primary doctor, who’d made an annual winter trip with them. His recommendation was not without qualification.

Hmmm, I thought. That sounds interesting.

Reudi arrived in Canada from Switzerland in 1980, and fell in love with the Selkirk Mountains. Since obtaining a permit from the provincial government in 1985 to build a lodge, he has had exclusive use of seventy-six square kilometers of high alpine terrain. He and his wife, Nicolina, run the day to day operations from the chalet, and their affection for what they do and for one another (come across, are on display, permeate, can be seen from the way they look at each other to the gentle touches they give each other in the kitchen. Their daughter, Kim, runs the broader logistics from Revelstoke. SME is a year around operation: from Alpine ascents and hiking in the summer to backcountry skiing in the winter.
An alternative lifestyle, plus the combination of a life of extreme physical activity and exposure to high-altitude elements, creates an ageless quality that is common among mountain guides. Reudi is wiry and fit; only a balding hairline and deep lines, carved in a leathery face betray his age. He has a slightly bashful smile, but there is no mistaking his confidence, even brashness when on skis.

Like a swiss watch; like a swiss train. These are cliché expressions. But the operation at SME is, no mistaking, Swiss-ly efficient. Lunch making is at 6am- 630am. Breakfast from 630am-700am. Departure is 8:00am sharp. Each morning after breakfast a seriousness would overtake each guest’s demeanor. As 8am grew closer, that seriousness turned to a slightly frenzied rush. Excitement for another new adventure, or perhaps fear of being last, of being perceived as slow, propelled the group out into the cold promptly by 8am. All except for me. I’ve been backcountry skiing for more than twenty-five years, and still, I am always last when it comes to getting ready. I can be first up in the morning, first up the mountain, but invariably, I will be the last one ready to ski. More than once, the guides had to ask if I was ready. Andre, a volunteer who accompanied us on many of our outings, even tried to buckle my boots for me on top of Centrale mountain, and another time after the group started down Snow Cap without me, Reudi raised his arms in exasperation as if to say, “WTF!?”

Despite my proclivity for dawdling, I got used to the eat-when-you-can, pee-at-your-own-risk relentless pace. I even began to admire and respect it. A week of skiing with Reudi illuminated the fact that everything he does is derived from his love of the mountains. After decades of guiding, no one would fault Reudi for taking a longer lunch break, stopping short of a summit, or calling it early on a stormy day and heading in for a hot cup of cocoa to sit by the fire. And yet here he was, pushing us to summit every peak, telling us to enjoy the views (even if there was nothing but horizontal snow), and showing us how to be a kid again with his wry grin as he turned to ski yet another great line.
Clouds and fog come and go. The climb up Tumbledown steepens. I take a mental picture of the terrain. It is a broad, evenly pitched thirty-degree expanse. The light is flat. The ski down would require trusting the snow and your turns. Skiing by brail would later best describe it. Someone in our group asked Ian if Reudi had slowed down at all now that he was pushing his mid-sixties.

“A little bit,” he said. “He’s a little slower. Not much, but a little. He takes a day off every now and then.”
Initially, during the first full-day ski tour, I thought the pace, though relentless, was a little slow. I kept having to wait and hold myself back, but after climbing over five thousand feet, it dawned on me that the week of skiing was going to be more about the long haul than the short sprints. By mid-week, as more guests opted for a rest day at the lodge, I began to appreciate the slow, steady pace. By the end of the week, after thirty-five thousand vertical feet of climbing and skiing, I was looking to kiss the boots of the almighty skin-track layer.

After a few hours of climbing we reach the summit of Tumbledown mountain. A stiff wind blows. Clouds are moving in from the west. The south face of Tumbledown descends all the way to the bottom of Jack Canyon. About 4600 feet straight down. Across this canyon I can barely make out the ridge where the Chalet is. I am trying to make sense of the grandness of this country when I notice people stripping their skins off in preparation to ski. We ski into a mixture of cloud and ice, of windblown crust and sastrugi, until we pop out of the clouds and into a field of powder dreams. We farm it up.

There are many expressions used for backcountry powder-skiing and the tracks carved in that snow: powder eights, farming the powder, schralping up the pow pow. None even begin to express the beauty of a perfectly skied set of S-turns in an otherwise untracked bowl.

The clouds and fog lift like a ballroom dance dress lifts during a twirl, and reveals the long expanse of slope we skied. Turning back to admire our handiwork I am overcome by a sense of satisfaction. Yes, it is only skiing. It is not as if we delivered humanitarian aid to a village of starving children, and yet, I couldn’t help feeling a great sense of accomplishment. As if climbing and skiing these mountains were somehow going to make me a better person.

After summitting Mt. Tumbledown one more time, we make the long descent down Diamond Glacier, across the icefield, down the Durrand terminus. We stop at a drainage a few hundred feet below the lodge. It’s been a long day. We are happily tired. Ian asks if we want to ski anymore or head back to the lodge. We unanimously say that we’ve had enough, take off our packs and pull out our skins for the short climb back to the lodge, where hot chocolate, beers, wine, and soda lay waiting. What kind of après ski snack will Dan, the chef, have for us today? Apple Strudel? An Absinthe Bundt Cake? Maybe a cheese plate with crackers.

Reudi skis up to us. “You going to da Lodge?” Ian gives a sheepish little head bob and shoulder shrug. “Okay then. See ya latah.”

And with that Reudi skis down the drainage, laying tracks, followed by his disciples. The last skier in Reudi’s group straggles alongside us. You can see that he is beyond happily tired, undoubtedly thinking about what lay on the hors d'oeuvre table, fresh and hot, a mere ten minutes away (turned out it was pizza with ricotta cheese).

“Shit,” he says, shaking his head. “Roodi.”  He looks down the slope at his posse of powder hounds, turns back to us. He rolls his eyes and takes a deep breath (I would later learn that he has been coming to the lodge since the 1990’s). We watch as he makes beautiful S-turns all the way down the long drainage.

Accommodations are elegantly rustic. There are private and two person bunkrooms. A reading room is adjacent to the family-style dining room. The chalet is cozy, yet there is space for solitude. I have always treated food as fuel when backcountry skiing: if it tastes good, then bonus. I didn’t plan this trip with high culinary expectations, but I could have. The food was excellent. I left the lodge determined to recreate two soups I would never have considered: beet and celery soup. I’m not a particular fan of eggplant parmesan, but I found myself asking for seconds. I even came away with a rekindled love for oatmeal.

Any trip to SME starts with and ends with Kim. She is the operations expert out of Revelstoke. Reudi is the heart and soul behind SME. His personality permeates everything you experience while at the chalet, from his accented swiss English to Friday night fondue. From the comic strips inside the outhouse, to the woodfired sauna.