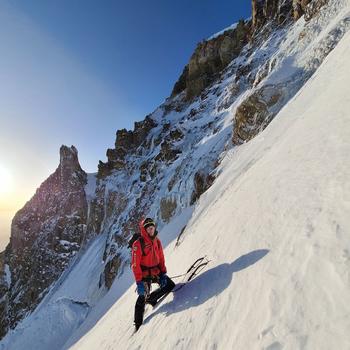 Matt Zavortink started climbing the Cascade Volcanoes on a regular basis in 2014 while living in Eugene, Oregon. Since moving to Portland a few years ago, he has spent a lot of time on his new home mountain, Wy’east (Mount Hood). Over the years Matt has become increasingly drawn to steeper, more technical winter climbing and he hopes to someday complete all of the named routes on Mount Hood (though there are some obscure ones he fears may no longer exist)! Matt also completed his first “expedition style” climb in May 2022 on Denali in Alaska, summiting via both the West Buttress and Cassin Ridge routes during the same climb window.

When not completing his personal objectives in the PNW mountains, Matt serves as a volunteer with Portland Mountain Rescue and has participated in many rescues on the upper slopes of Mount Hood and the surrounding area. He also plays chess competitively and is a three-time Oregon State Champion. Mountain Shop is thrilled to welcome Matt to the ambassador family!